The Trials and Tribulations of Spa Six Hour 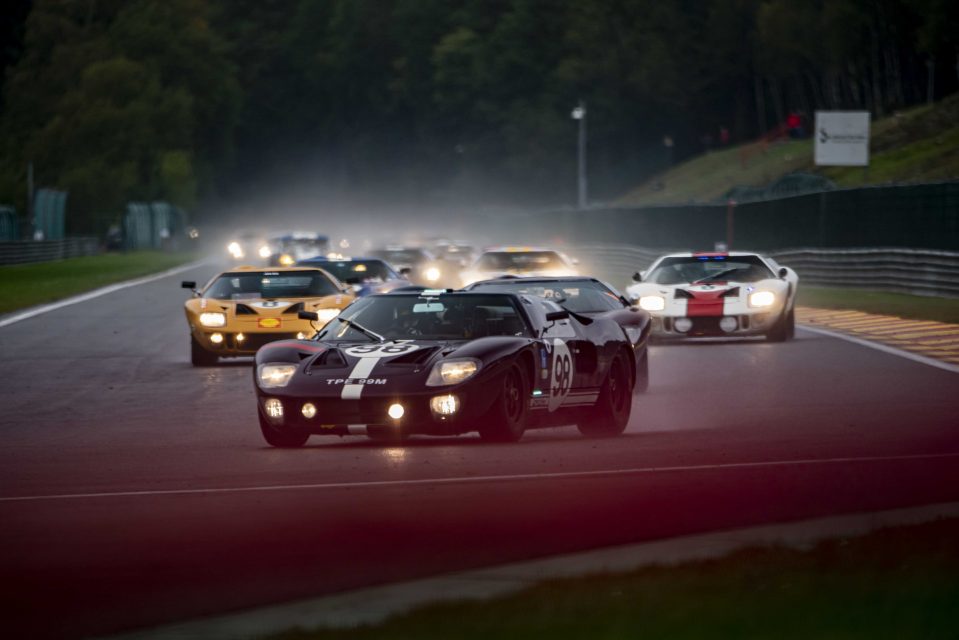 So this year the Spa Six Hour event (2019) was a toughie, but then looking back, we have enjoyed two consecutive year’s of clear fine weather, for an Autumn event, that is set in the Ardenne forest in Belgium. The weather is just one of many challenges faced by competitors in this event the greatest historic endurance race that still exists – (queue the music) – Spa Six Hour! 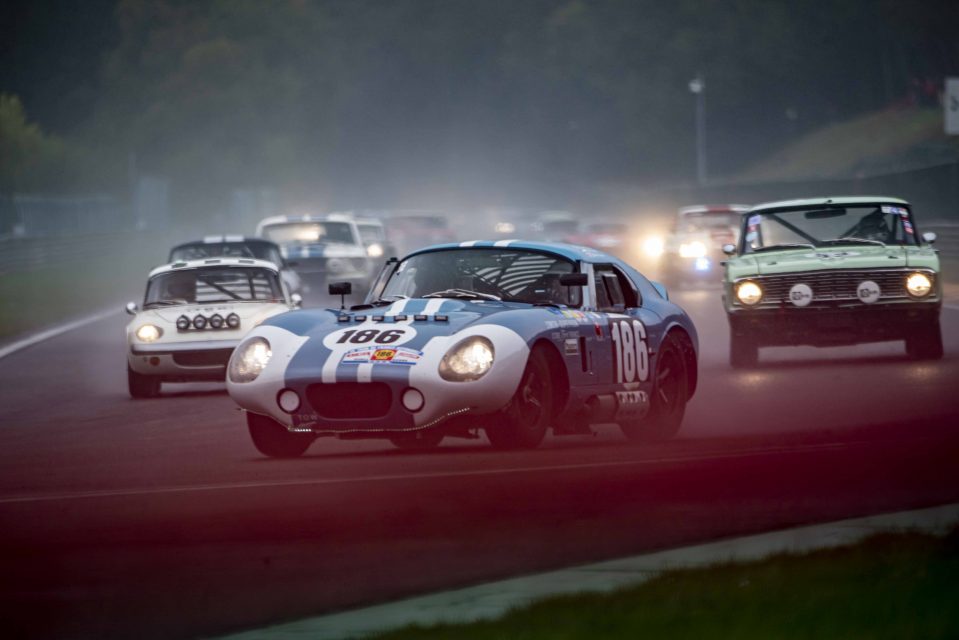 Over one hundred cars qualified on Friday, 27th September amongst them no less than 14 Ford GT 40 with last year’s winners, Marcus Graf Von Oeynhausen and Nico Verdonck. Other experienced pilots with a potential race winning GT40 in their hands included: Walker, Meaden, Stretton, Davies, Newall, Hart, Meins, Bryant, Cottingham, Nolte, Gläsel, Le Blanc, Minassian, Huff, Shedden, Pastorelli, Schryver, Guenat, Soper, Mahé and Hancock.  So you can see there was plenty of talent!  It was actually the Eric van de Poele pairing with American James Farley who secured pole position with a 2.42 lap with last year’s winners in second place. 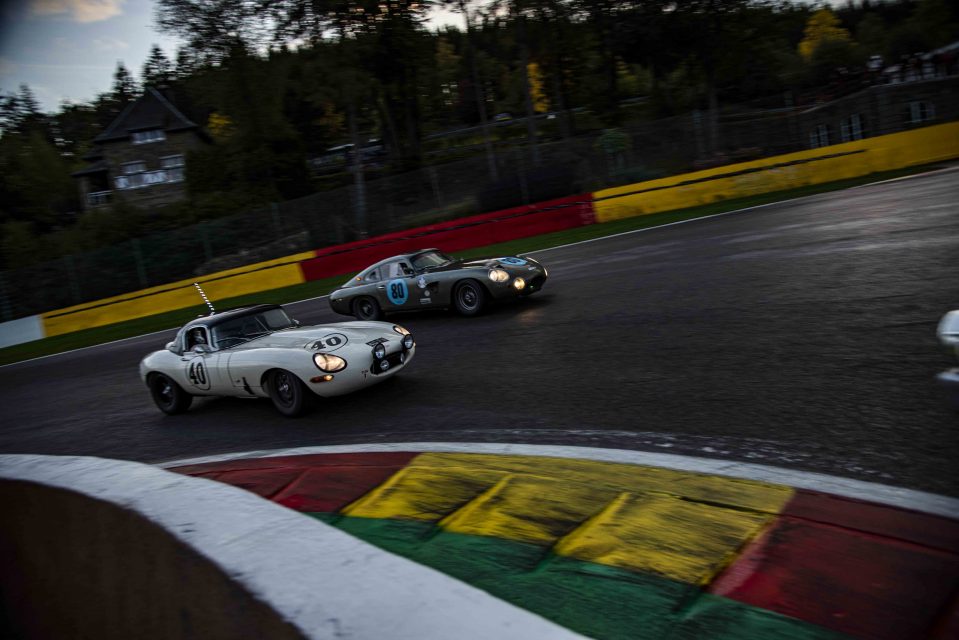 The Jaguar E-Type still remains the Ford GT40s main rival, the big cat’s last victory dates back to 2010 with the trio Minshaw-Stretton-Minshaw, also victorious two years earlier. This year the serious contenders included specialists Clark-McCaig-Smith, Minshaw-Pearson, Burton-Finburgh-Newall, Hunt-Blakeney Edwards-Wakeman, Melling-Minshaw-Pattle and Halusa-Halusa- Megrue. In qualifying it was the Clark-McCraig-Smith E-Type who set the quickest time of the big cats with a 2.50 lap. 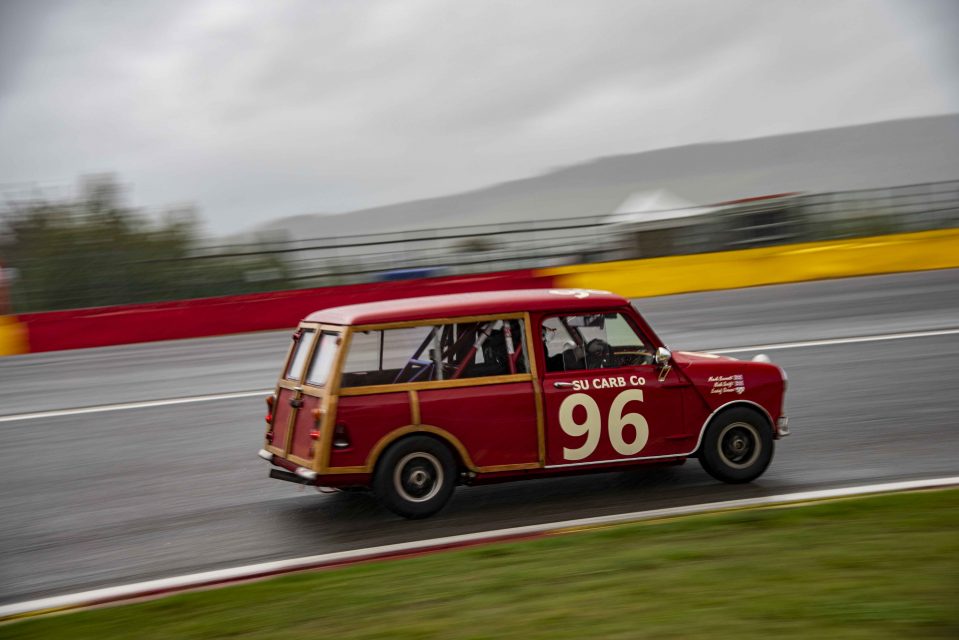 Highlights of the grid included the Austin Mini Countryman (a Woody estate!) of Burnet-Swift-Owens, the Bizzarrini 5300 GT (Muelder-Traber-Seefried) and the Aston Martin DB4 GT DP214 of Friedrich-Hadfield-Mallock 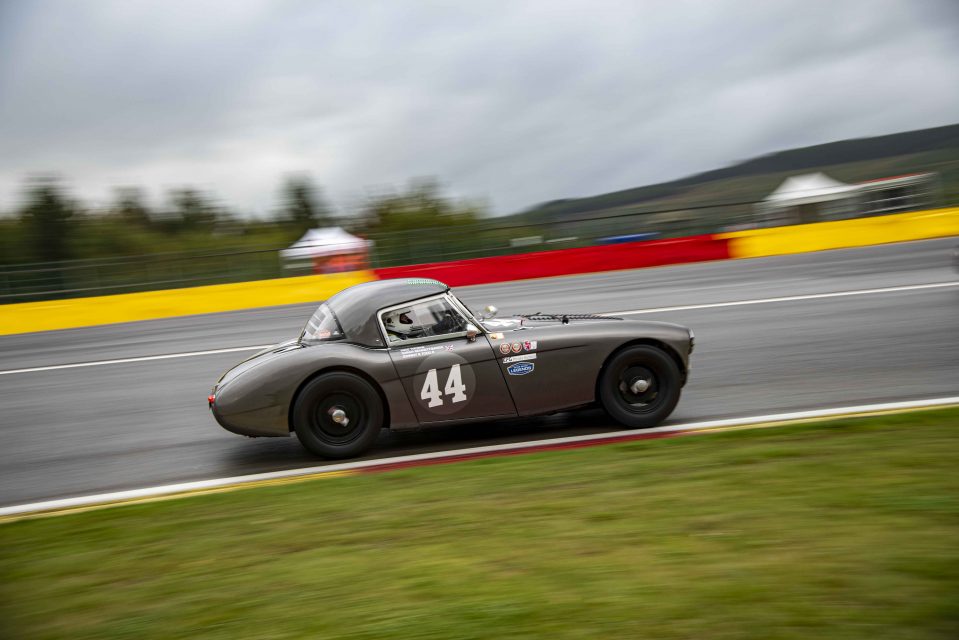 As usual the English teams were out in force (too many to mention) supporting the 27th running of this event, we were fielding the oldest car on the grid the 1954 Austin Healey 100M (pic above) one of just two on the grid, our driver line up Thorne-Bennett-Baggs-Todd. We were sharing a garage with the Triumph TR4 of Rawe-Chatham. 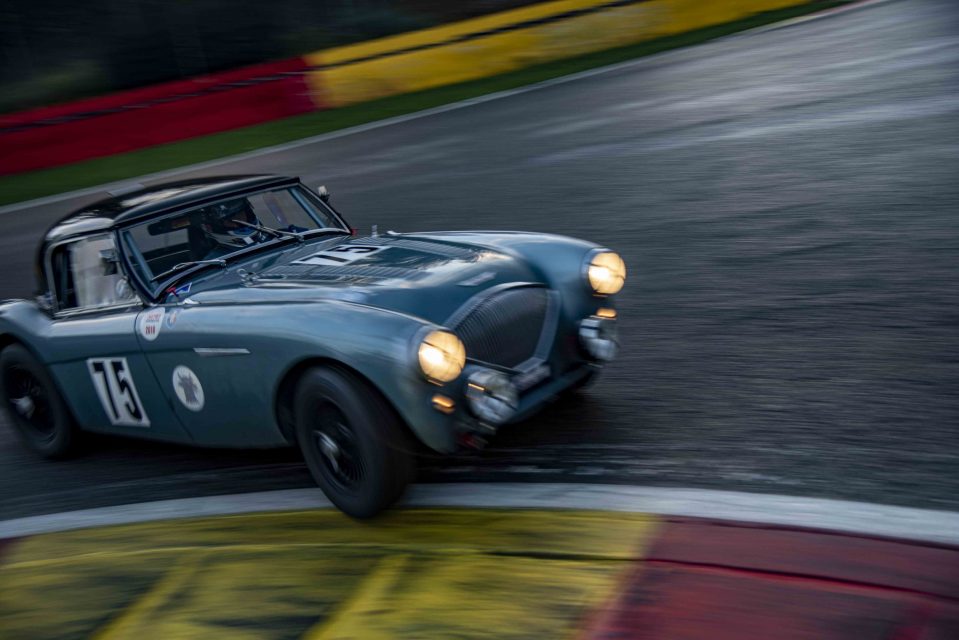 Having qualified 73rd position in the Healey, we made a promising start with Mike at wheel and in the first 2 hours of a very wet race we climbed up to 44th position. Mike commented about the start “The track was just ridiculously slippery, it was pouring with rain and on top of this 100 historic race cars brimming with fuel were sloshing it about on every corner making arriving at each corner rather unpredictable.”  “There were people diving off, unable to brake, all over the place, it took a huge amount of concentration to keep it all on the black stuff, coupled with this we were having issues with the Healey’s hardtop which was pouring water into the cockpit and I was trying to stop it taking off.” No surprise then, that the rate of attrition and retirements was pretty high in the first part of the race. 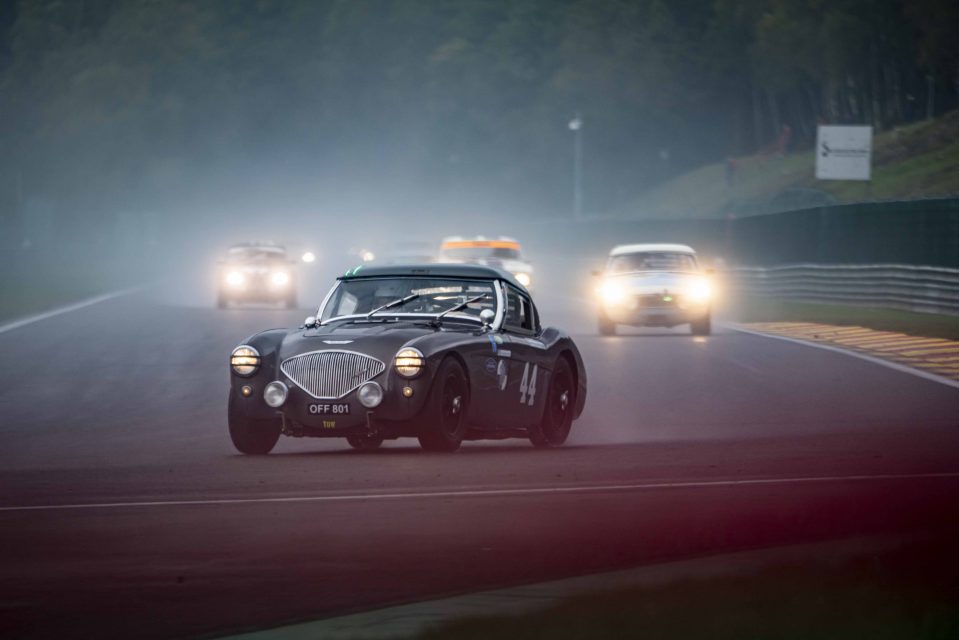 Sadly the rain never really lifted and set in for the duration, Mike made an unscheduled stop to try and fix the roof, and because the fuel usage was so much lower we changed our strategy to leave him out for longer. That was until the water pump pulley broke. It was a random break, never known before. We stuck the car in the garage and ripped out the water pump, radiator and pulley whilst looking for a spare. 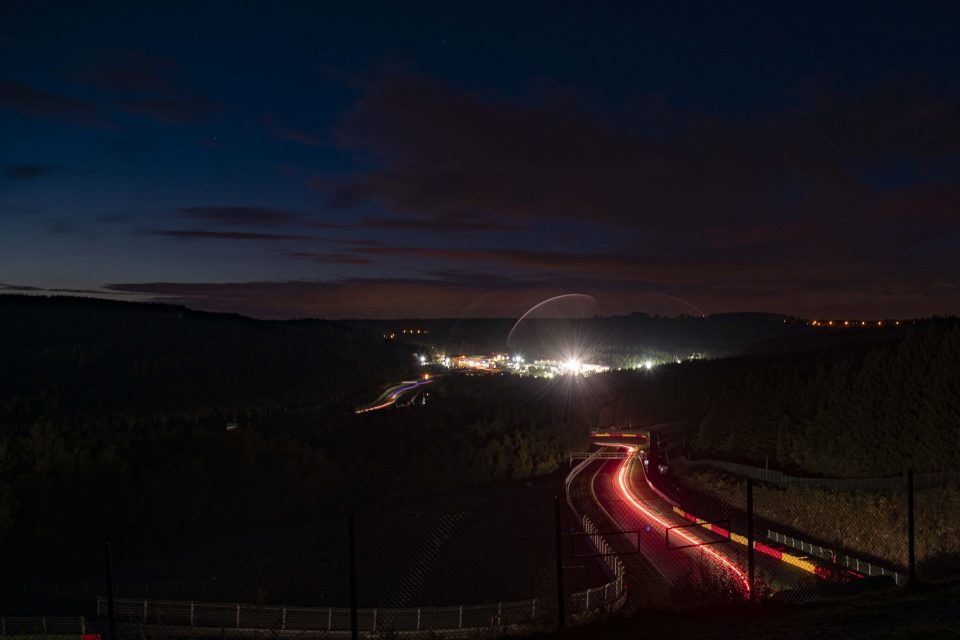 The Belgium Healey crew tired to help but it was Jeremy Welch who came up with the goodies, a spare pulley to get us back on the road, but once the car was fixed and ready to go – the clutch release bearing decided to seize leaving us clutchless. A bump started lap by Toddy got the bearing released and having checked the water pump pulley & raditor were all functioning I was duly strapped in and sent off. The light had faded by this time, and we had slid back down to somewhere like 65th overall. But I didn’t get far, as I climbed Eau Rouge to give it the beans down the Kemmel Straight the Radiator hose must have popped off spewing all the Rad water out the bonnet vents and across the windscreen. A quick look in the rear view mirror, nothing behind me so I turned off the power and glided the car onto the grass on the inside of the circuit and came to a halt in the dark.  The track was already under safety car so, a few moments later a truck came along, towed me to a gap on a 2 metre rope, then radioed for a pick up truck to take me back to the pits. – We fixed it once again and rejoined the race, only to retire the car some 30 minutes from the end when the clutch plates were rattling like a jamboree – one of those noises you know is only going to end in disaster. –  Sometimes you just have to admit defeat, so we did! 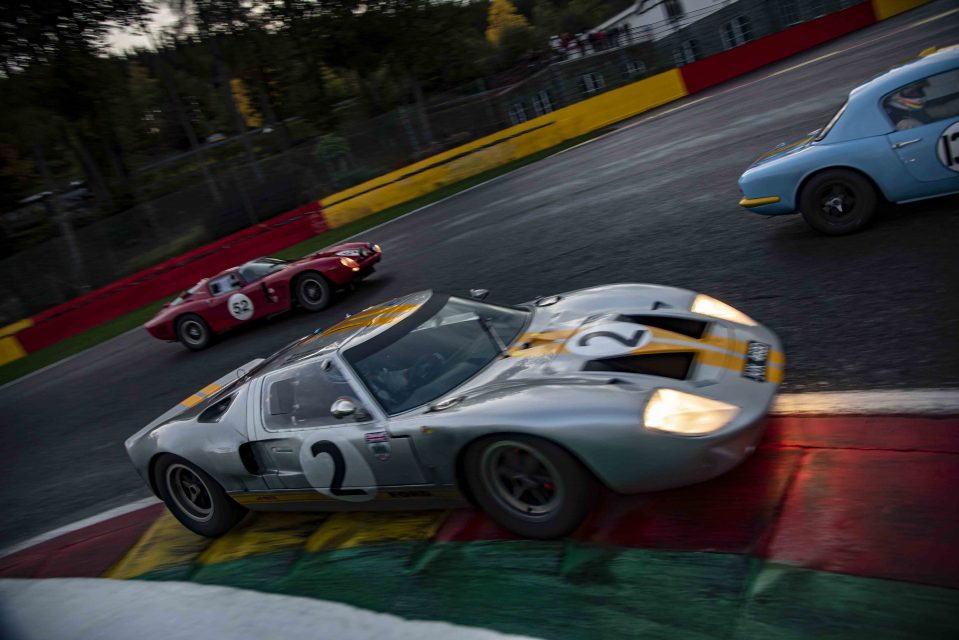 At the final flag it was of course a GT40 which was first across the flag, and huge congratulations go to the British team Walker-Griffiths-Sheddon pairing who took the honours, a superb drive in very challenging conditions. 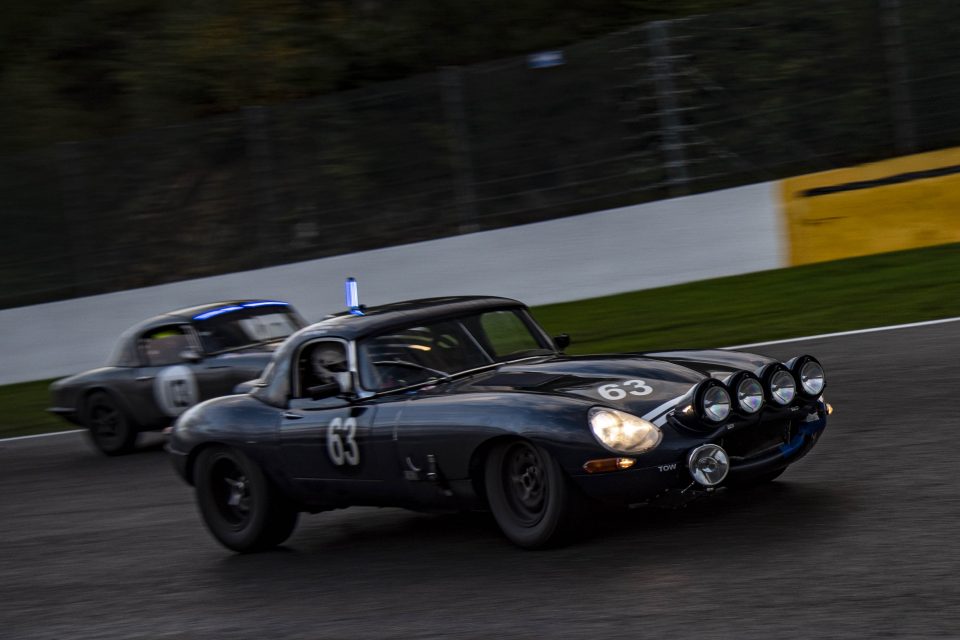 Other notable finishers included the Aston Martin BD4 GT DP214 coming 2nd overall and the Lotus 26R of Hancock-Hancock-Twyman in fourth place. Katarina Kyvalova and Jamiee Chadwick (fresh from winning the inaugural W-Series) also did great work to finish 11th overall, the 2nd Jaguar E-type home – not a bad finish for the ladies but when you consider the conditions it was an epic result for them!  Top work ladies! So many cars retired or spun off, too many to mention.  The mini countryman was deemed unclassified due to being non FIA compliant and ran in the invitation class, but they circulated with enough laps to secure them a place in the top 20. Top work and great to see the Woody out there! 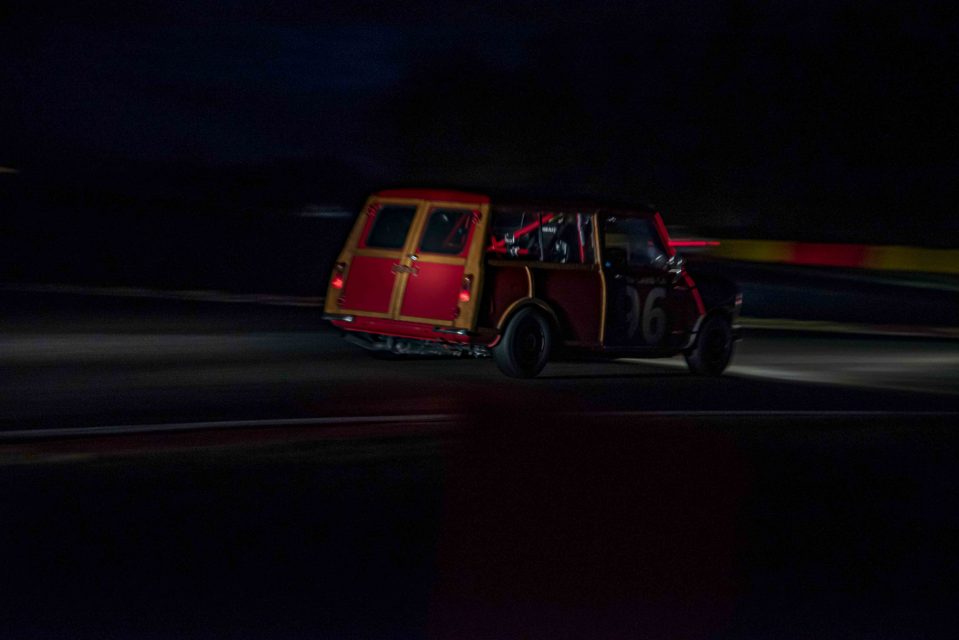 These fabulous images (and there are lots more) were sent to us courtesy of @fullthrottlephotosoliver -Please do not use them without his permission. If you would like to contact Oliver Flower for images of your car please click here – to email him directly via his website

Full results of the event can be found here

Our Website uses cookies to improve your experience. Please visit our The Trials and Tribulations of Spa Six Hour page for more information about cookies and how we use them.