With the very welcome return of spectators this year, the atmosphere at the eleventh Donington Historic Festival (DHF) was buzzing even before the high-octane track action got underway over the weekend of 30 April and 1 May.

DHF 2022 presented the thousands of historic motorsport fans with a wealth of world-class racing machinery spanning eight decades. Touring Cars from four decades took to the track across two enormously entertaining tin-top grids, while the magnificent pre-‘56 and pre-‘61 sports cars of the combined Royal Automobile Club Woodcote Trophy & Stirling Moss Trophy race demonstrated that beauty and performance make a potent combination. A round of the Jaguar Classic Challenge showcased the big cats’ sporting heritage and sprightly, near-centenarian pre-War sports cars proved that there can be plenty of life in machines that originally raced more than 90 years ago. 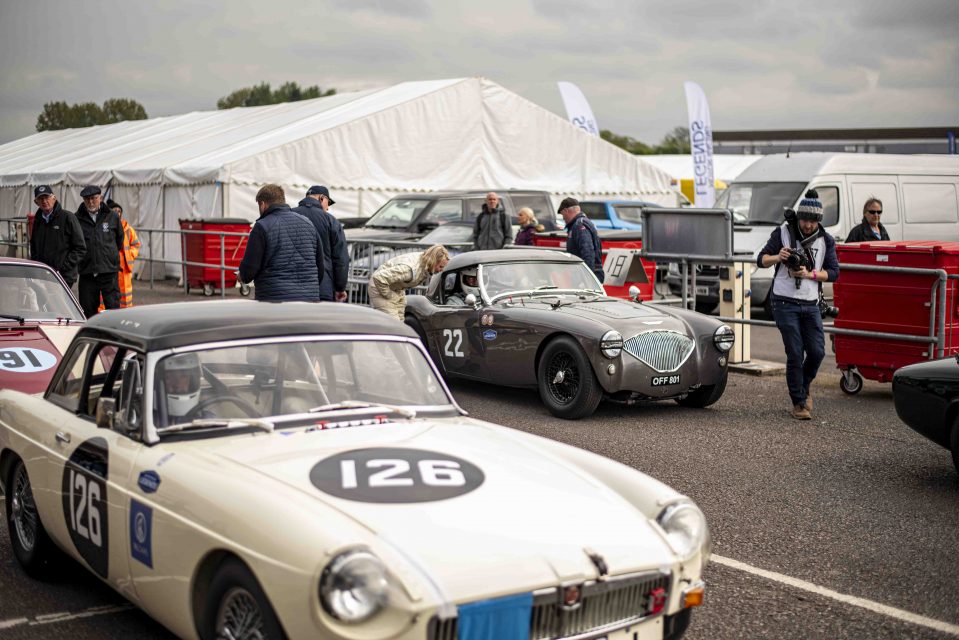 Among a weekend of motorsport highlights, the epic, three-hour endurance battle of the Royal Automobile Club Pall Mall Cup and the two 40-minute races for C1 by Duncan Hamilton ROFGO for original factory Group C cars shone particularly brightly, with the return of the Group C beasts in their iconic liveries to Donington Park going down a storm. Few who were there will forget the sight of the ex-Paul Newman Spice SE89P being hunted down by a trio of Silk Cut Jaguars and a thunderous Lola T92/10. 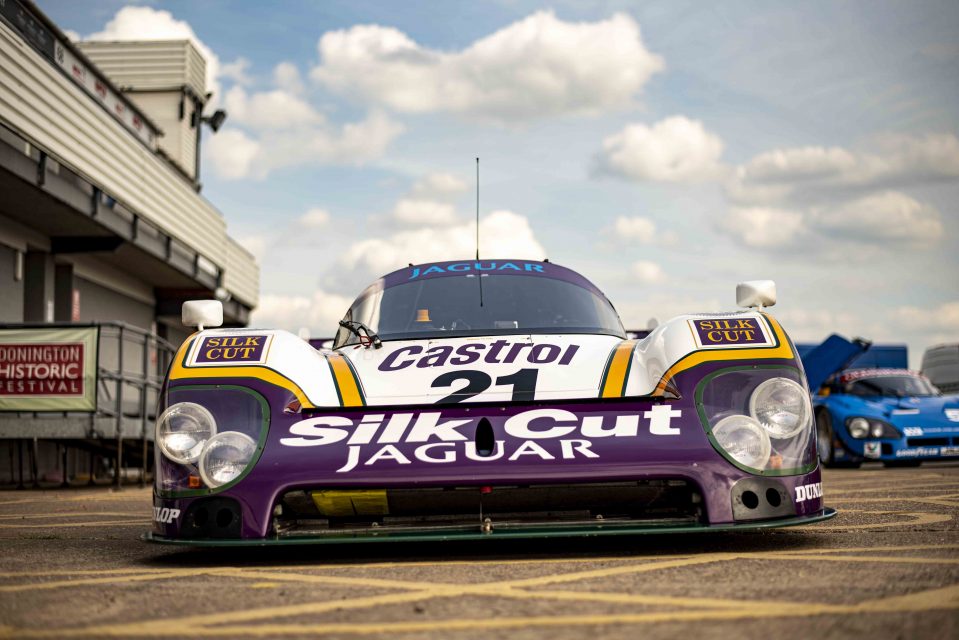 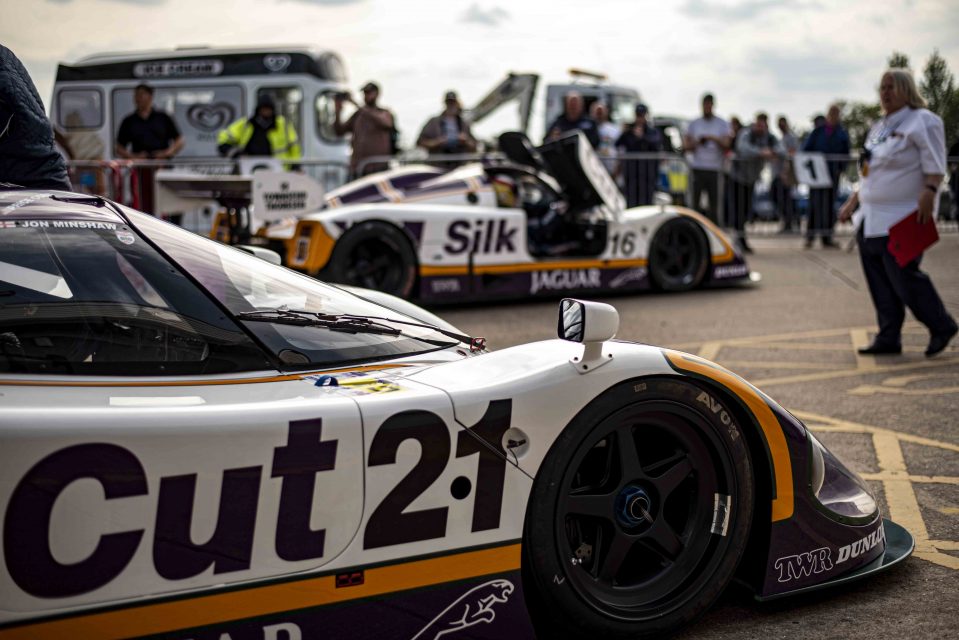 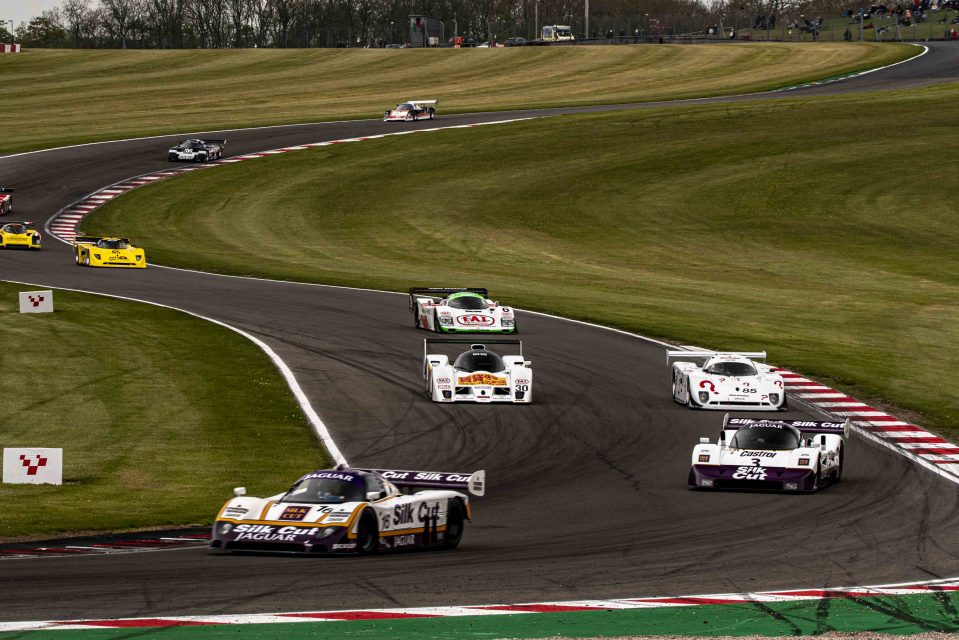 The Infield and Melbourne Hairpin played host to hundreds of gleaming cars brought along by members of dozens of car clubs, 100 of which were showcased out on track each day in the lunchtime parades. The all-access Paddock and daily pitlane walks allowed visitors to get up close to the astonishing array of racing machines – with the Group C tent proving a particular draw. Members of the Sporting Bears Motor Club brought along some fabulous machines of their own, giving passenger rides which raised several thousand pounds for a local charity, and everyone craned their necks to watch the daily Spitfire flypasts from the Royal Air Force Battle of Britain Memorial Flight. 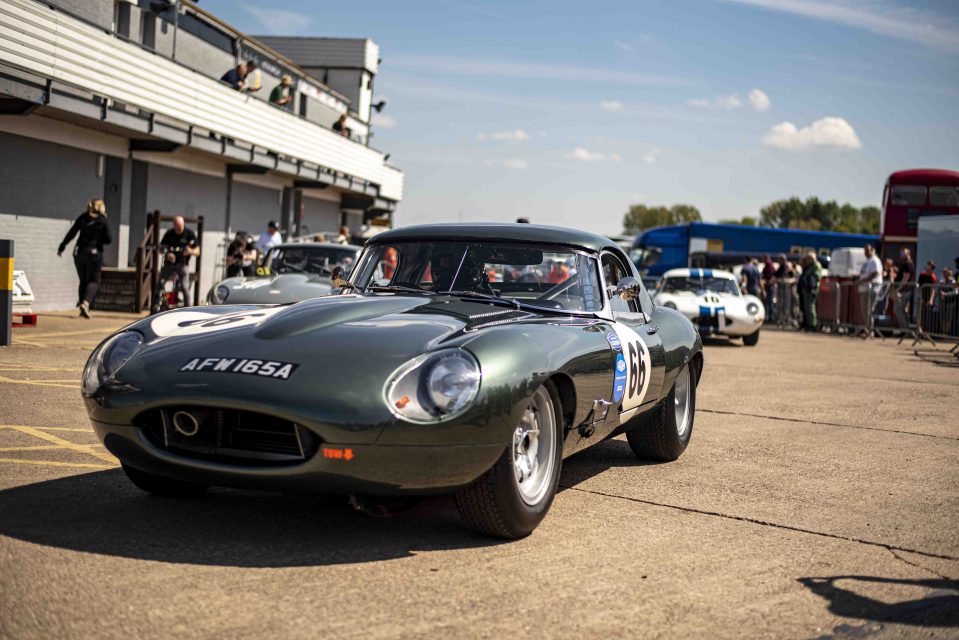 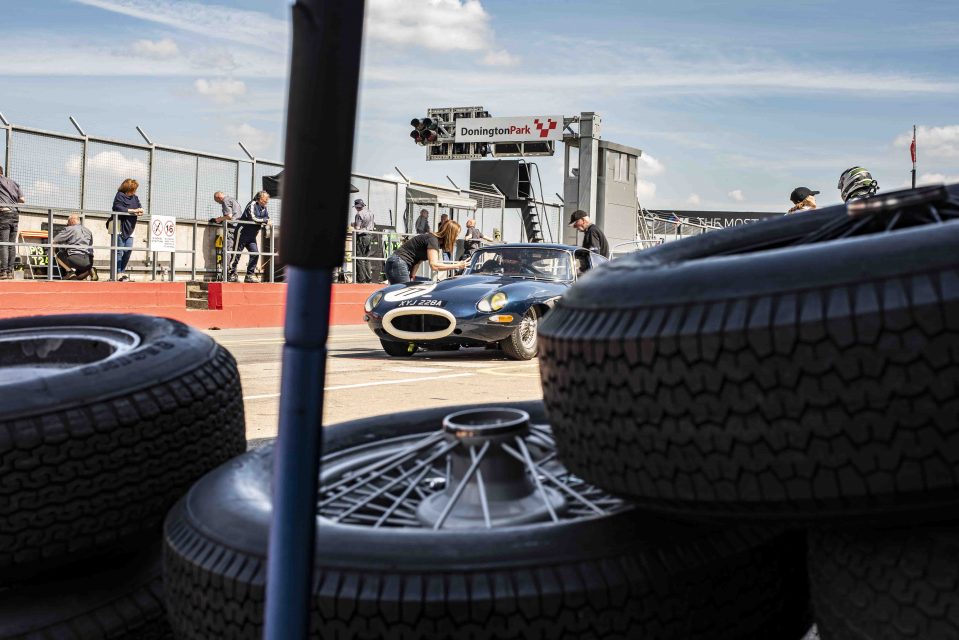 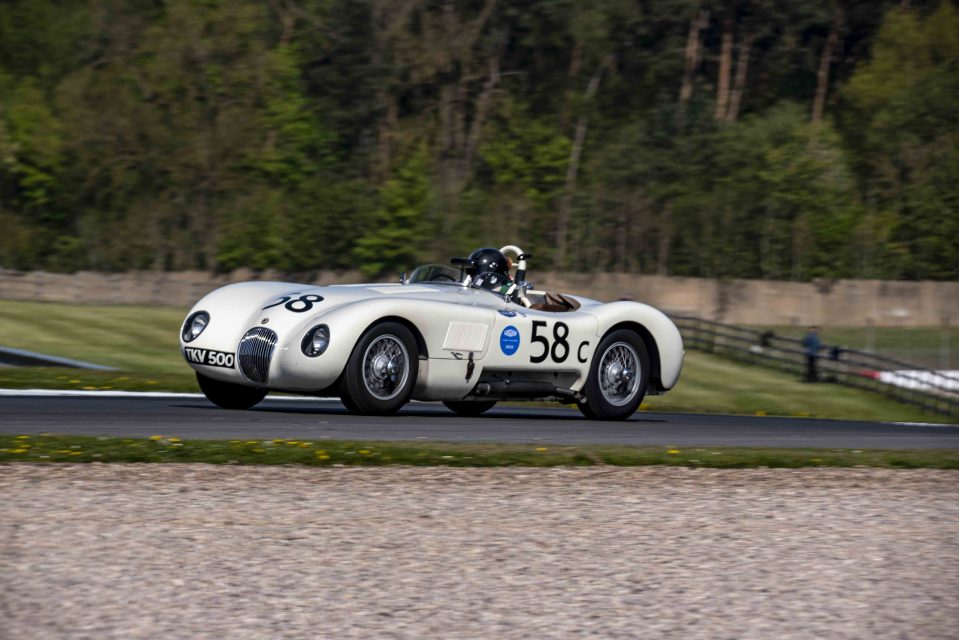 Danny Winstanley took the honours in the first race of the weekend, the Jaguar Classic Challenge. This turned out to be an E-type 1-2-3 with the Gary Pearson/Alex Brundle car in second, followed by Joaquin Folch/Simon Hadfield. 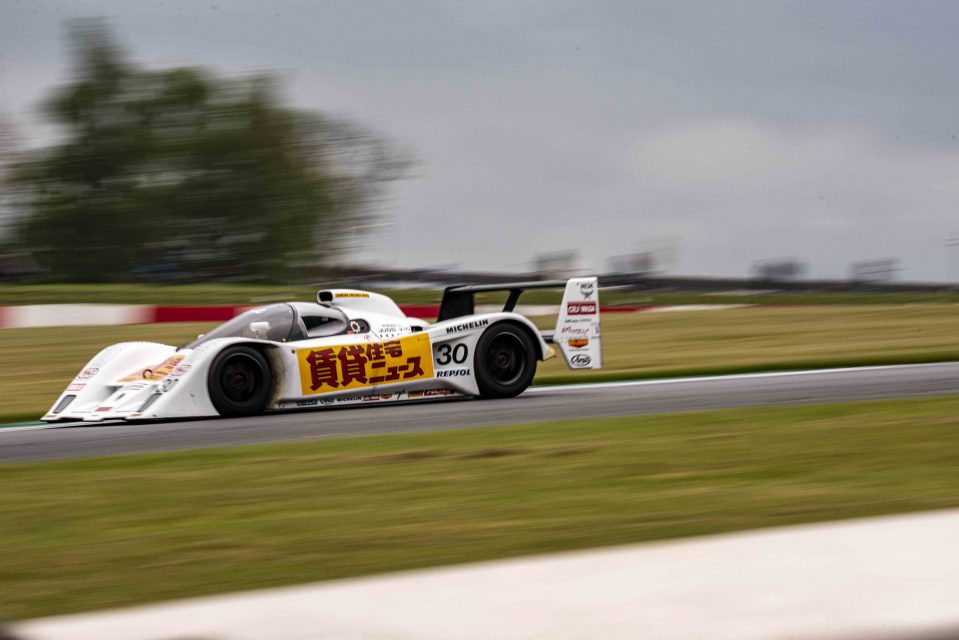 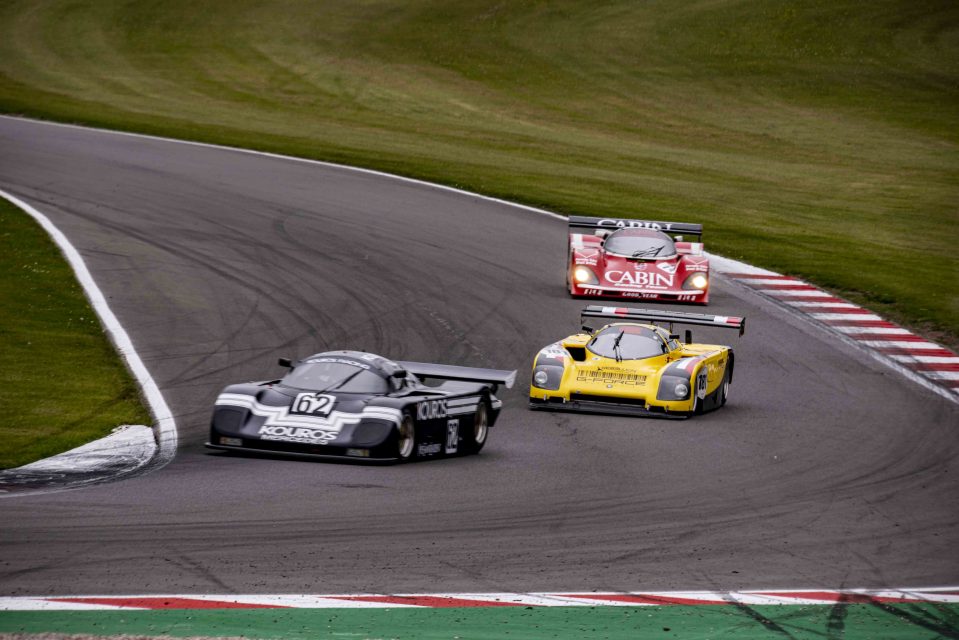 The ex-Paul Newman Spice SE89P blasted its way to victory in the hands of Rob Huff in the first of two C1 by Duncan Hamilton ROFGO races. And what a race it was! Andrew Bentley brought his XJR-8 home in second place, while fellow Jaguar pilot Phil Keen slipped down the field with gearbox issues, allowing David Hart to sneak third in the Lola T92/10. Race commentator Bruce Jones remarked afterwards ‘We hoped it was going to be good. But we didn’t expect that!’. 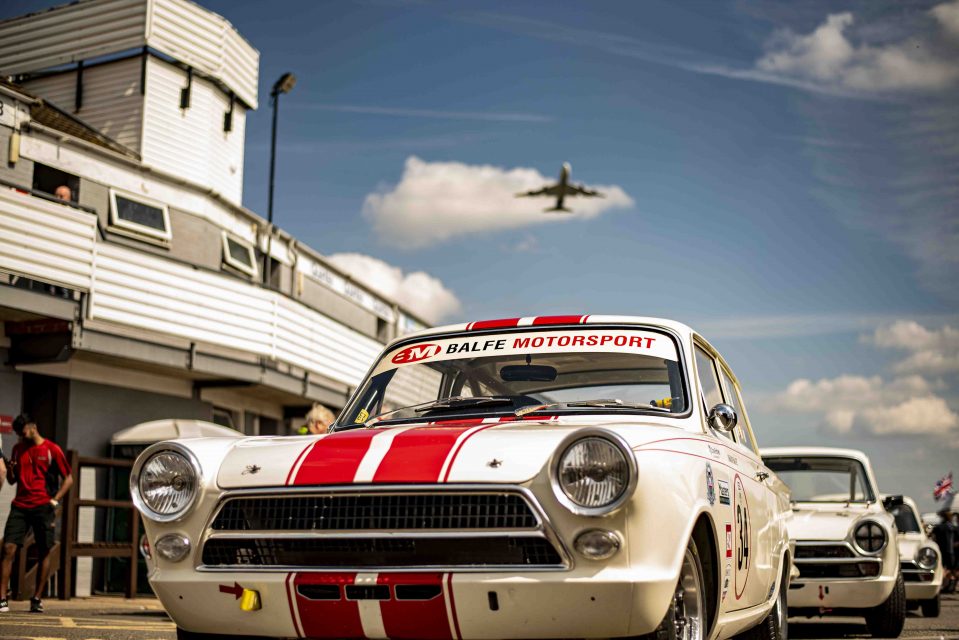 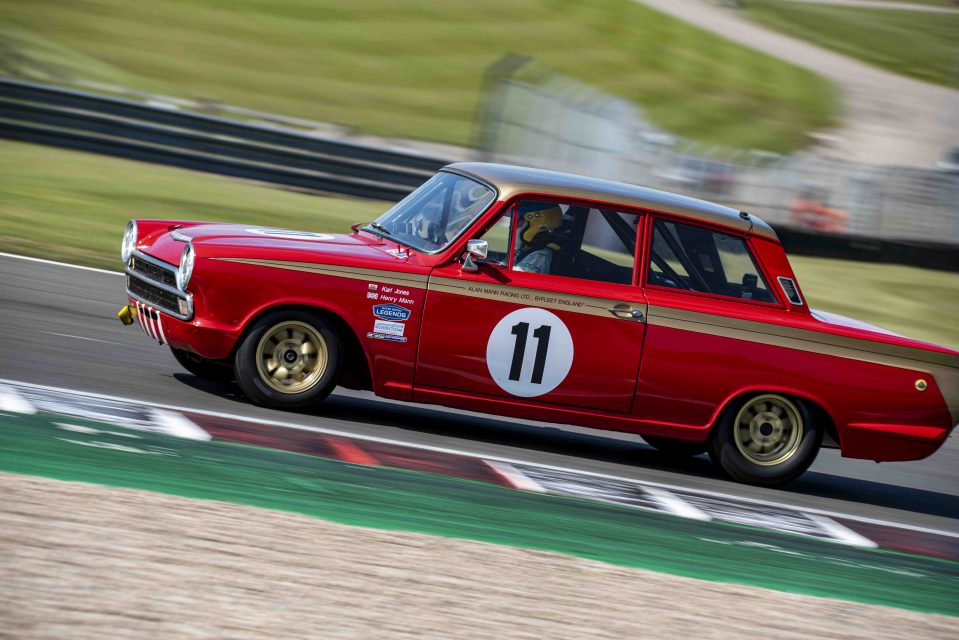 A cracking Sixties Touring Car Challenge with U2TC race saw Ford Lotus Cortinas piling into all corners sideways to take four of the top five spots in an astonishingly close 60-minute race. David Pittard fought a pitched battle with Julian Thomas, who did enormously well to hold Pittard off for as long as he could, but ultimately was pipped to the post. Andrew and Max Banks brought their Alfa Romeo Giulia Sprint GTA home in 3rd. 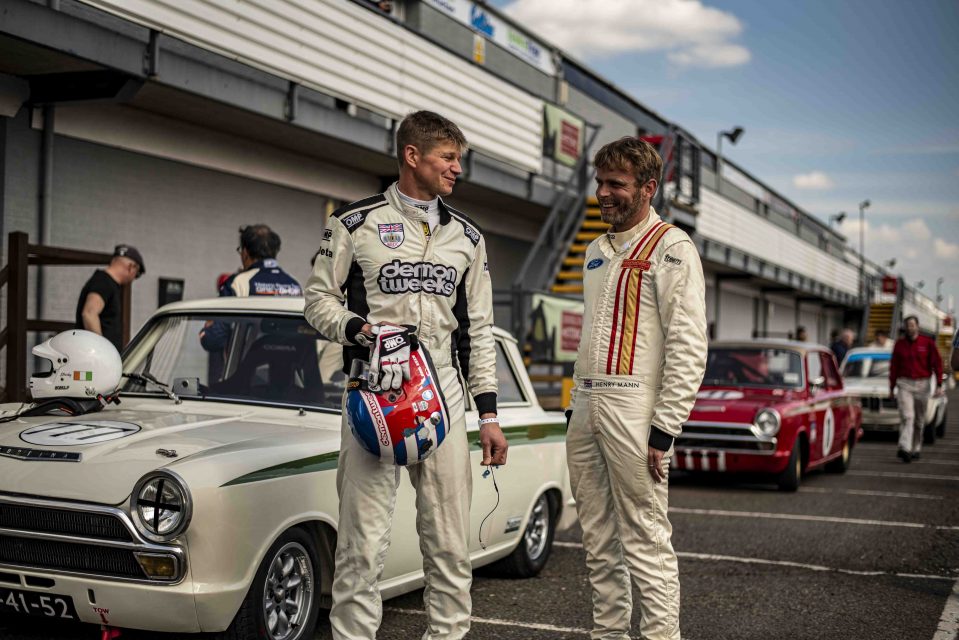 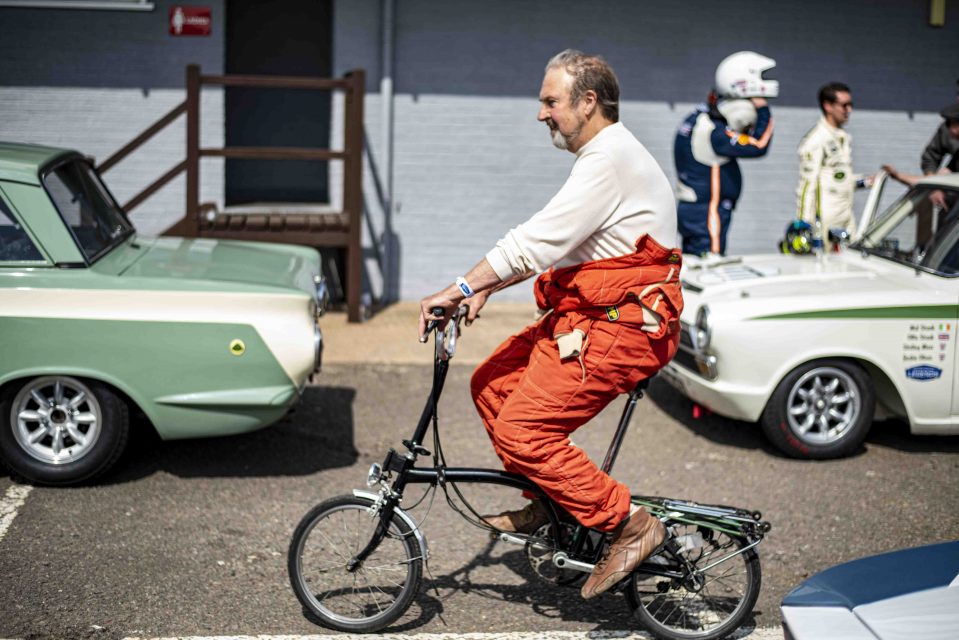 Saturday’s final race, the Royal Automobile Club Woodcote Trophy and Stirling Moss Trophy for pre-’56 and pre-’61 sport cars, saw a massive grid of 38 cars entered and presented a stunning sight as they streamed around Donington Park. Victory in the Stirling Moss Trophy went to John Spiers and Chris Ward in the Lister Jaguar Knobbly, with Tony Ward driving solo in a Lister Knobbly finishing in second place, followed by the Lotus 15 Series 3 of William Nuthall and Bernado Hartogs. Regular Woodcote Trophy winners Fred Wakeman and Patrick Blakeney-Edwards stayed true to form with another victory in the Cooper T38, with Ben Eastick and Karl Jones second in Ben’s D-type. The C-type of Nigel Webb and John Young finished third. 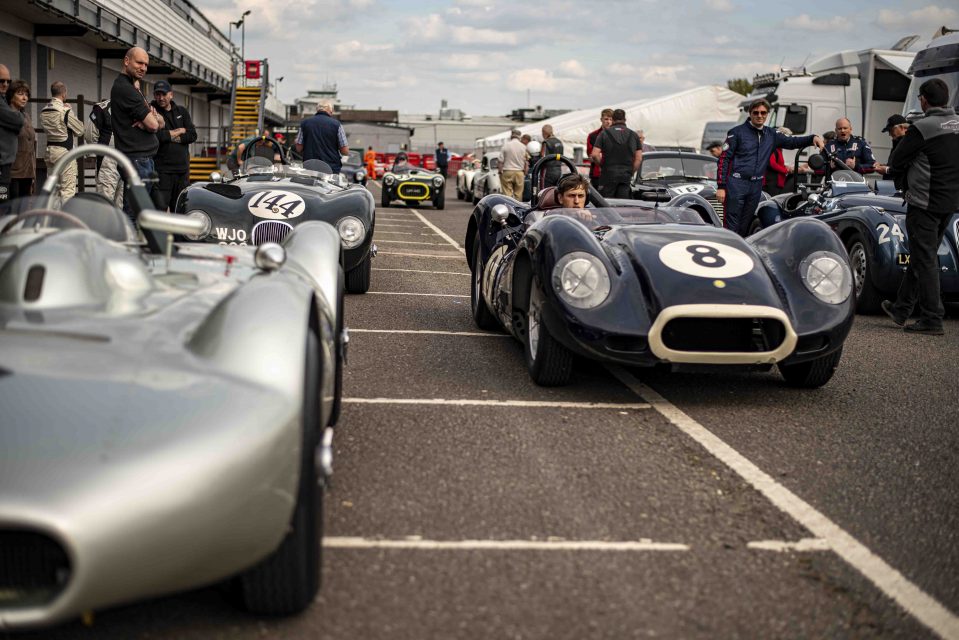 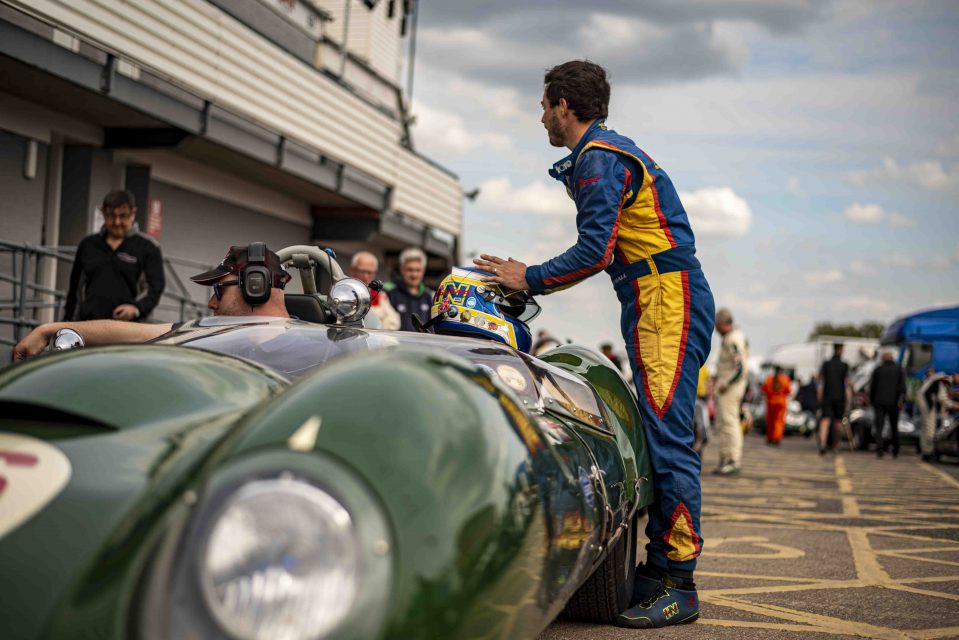 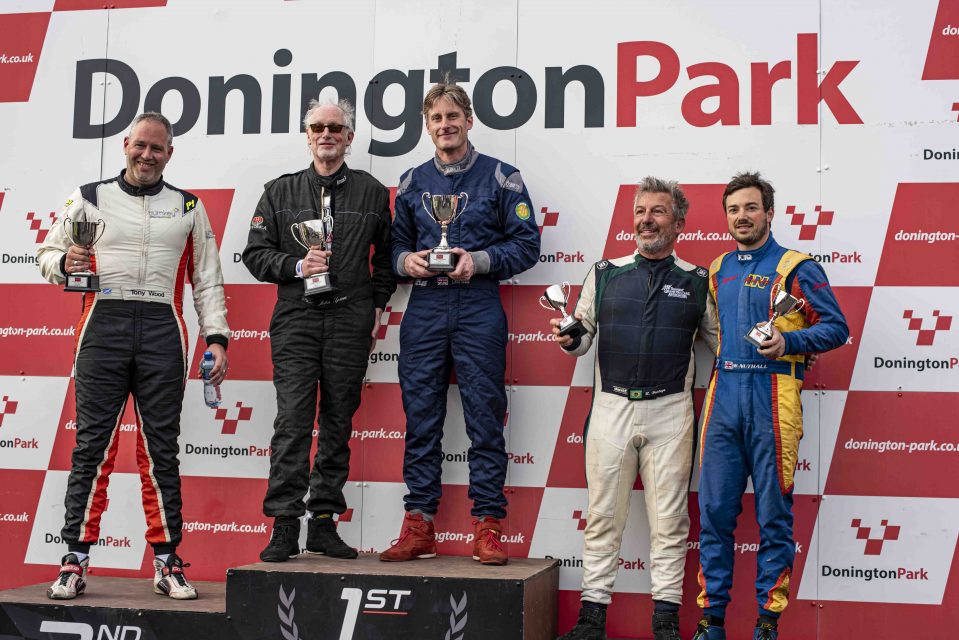 Sunday’s first race, the ‘Mad Jack’ for Pre-War Sports Cars, was a real eye-opener. Gareth Burnett took a commanding victory in his beautiful Alta Sports, followed by Lukas Halusa in the stunning Alfa Romeo 8C 2300 Zagato and Lukas’s father Martin in the family Bugatti 35B. Sue Darbyshire’s tiny Morgan Super Aero three-wheeler buzzed around the Bentleys and other big machines on the grid to finish in fourth. The Halusa Bugatti won the 1927 San Sebastian GP Formula Libre and was then hidden behind a wall during the Spanish Civil War and only discovered several decades later. The Halusa Alfa Romeo also has a notable history, having been a finisher in the 1933, ’34 and ’35 Mille Miglia races. 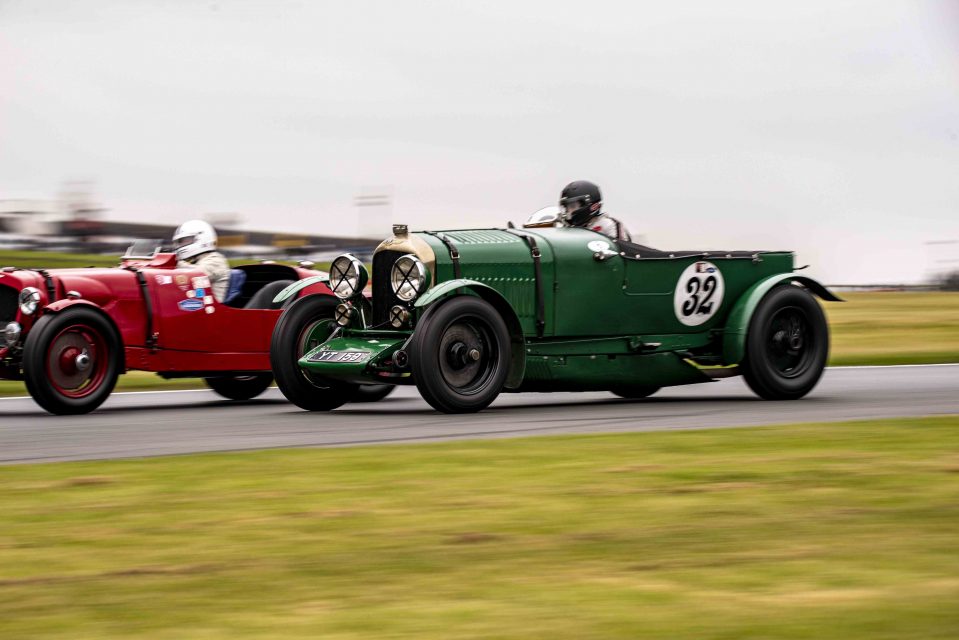 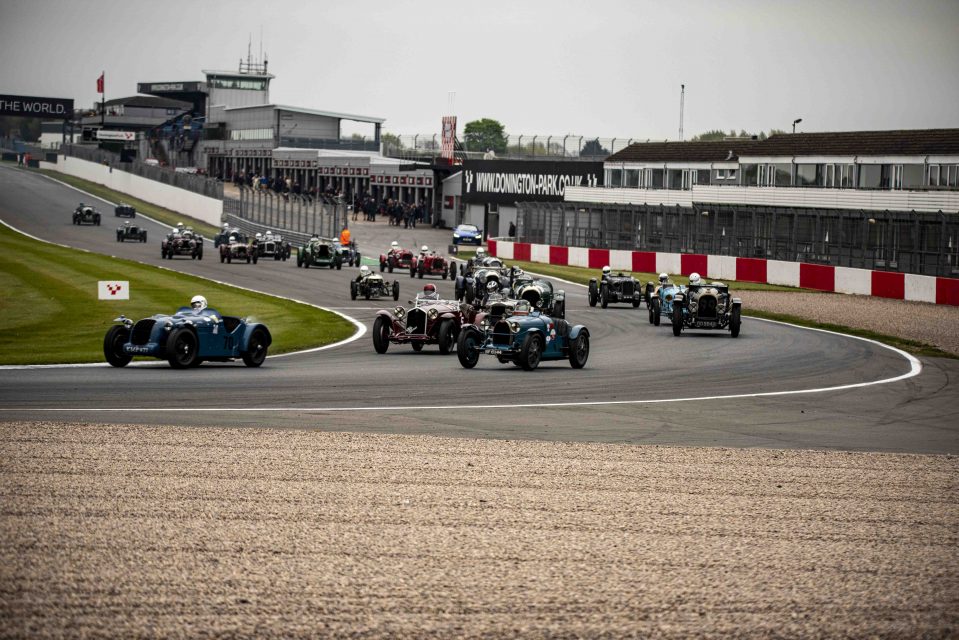 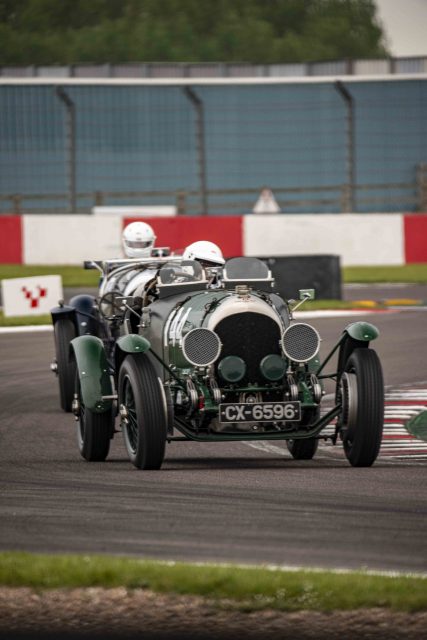 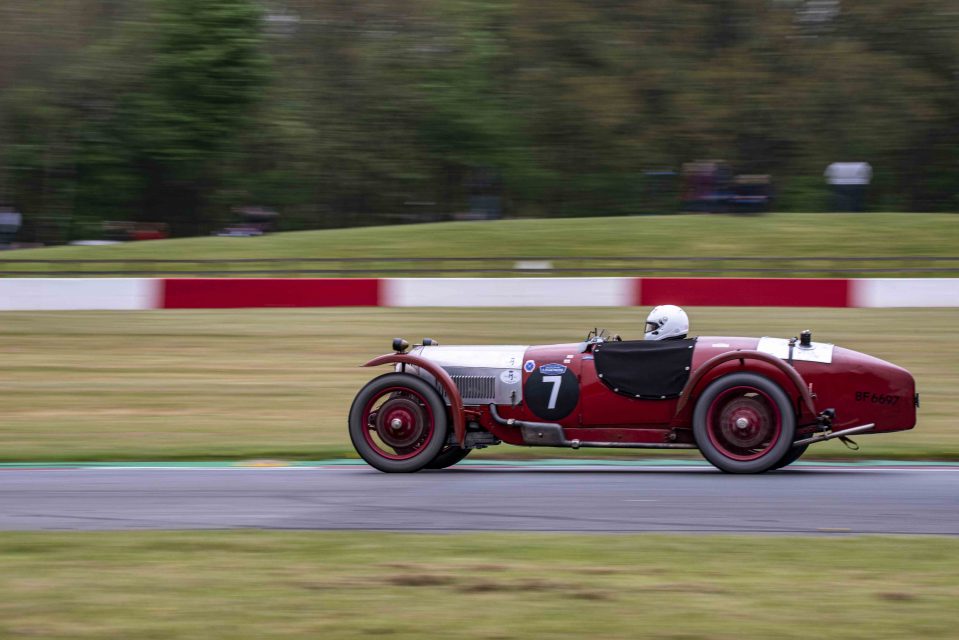 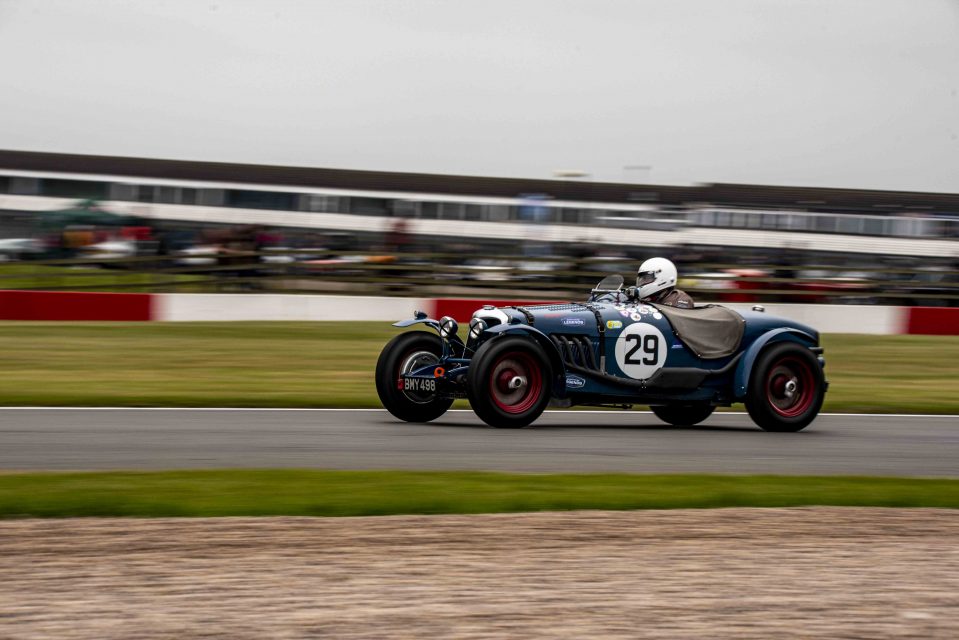 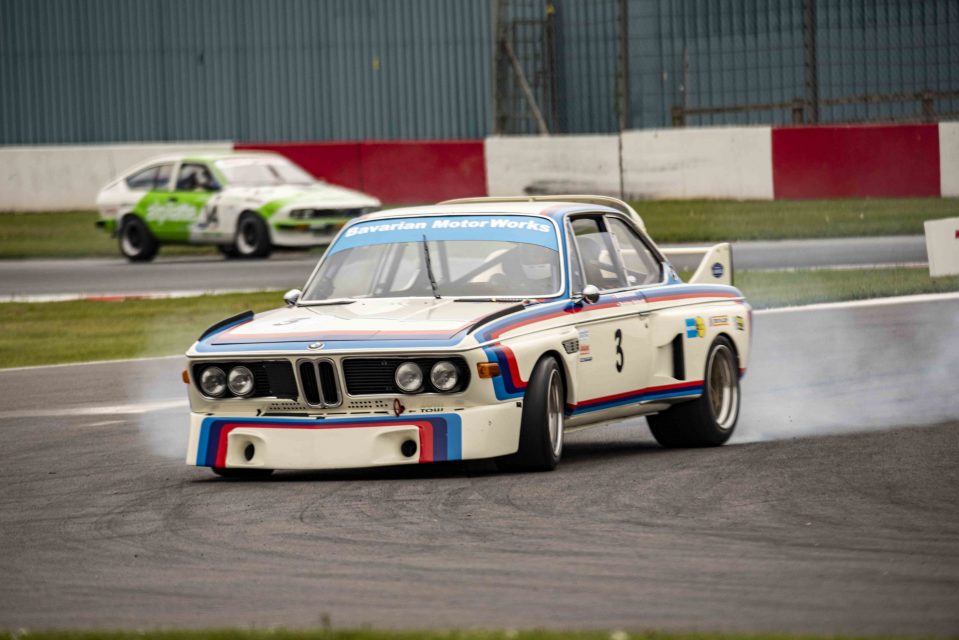 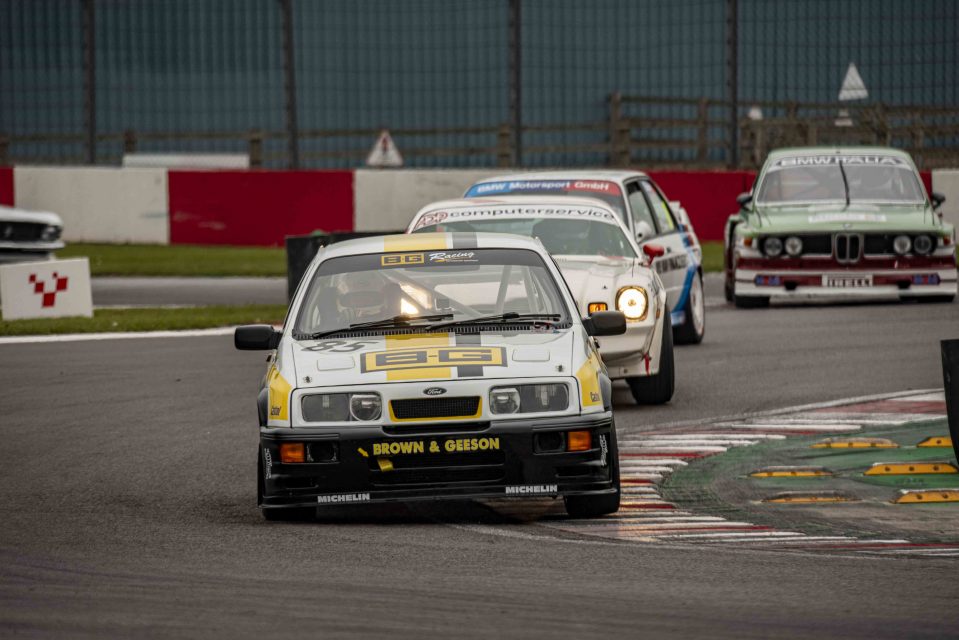 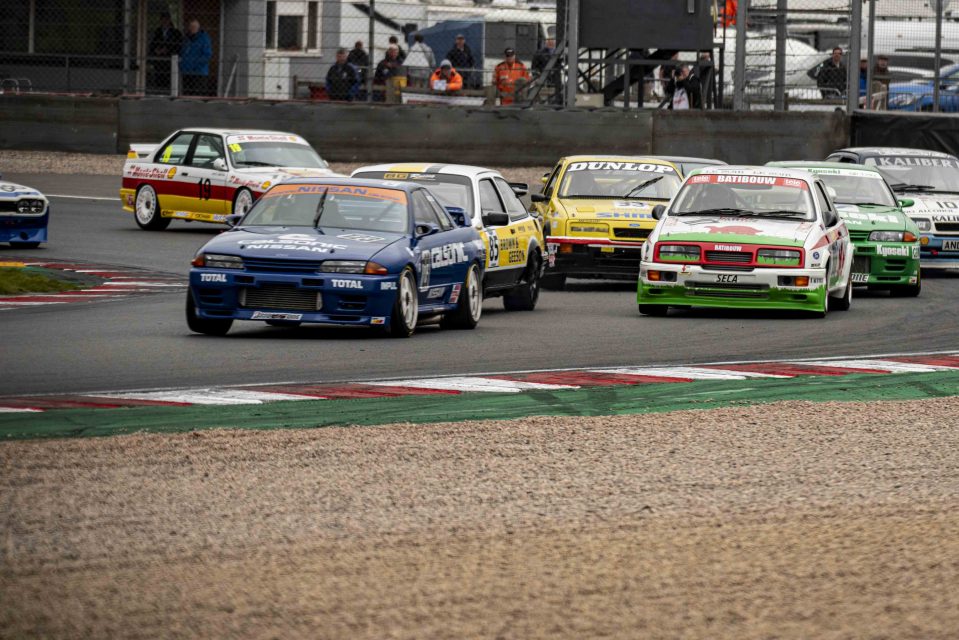 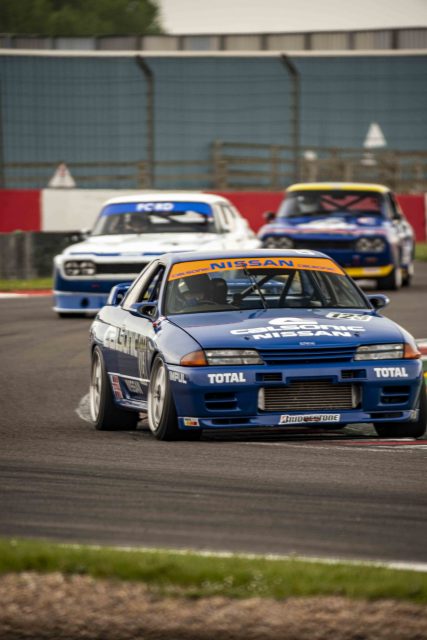 Sadly, a broken rocker which had indicated itself as a misfire in the first C1 race prevented Rob Huff bringing the ex-Paul Newman Spice out to play in the second C1 by Duncan Hamilton ROFGO race of the weekend, but Andrew Bentley mastered the damp conditions to take the win in the Jaguar XJR-8.  Dutch driver David Hart gave it a really good try in the wonderfully noisy Lola T92/10, trailing Bentley by a fraction over one second, with Mike and Matthew Wrigley bringing their Spice SE89P home in third. 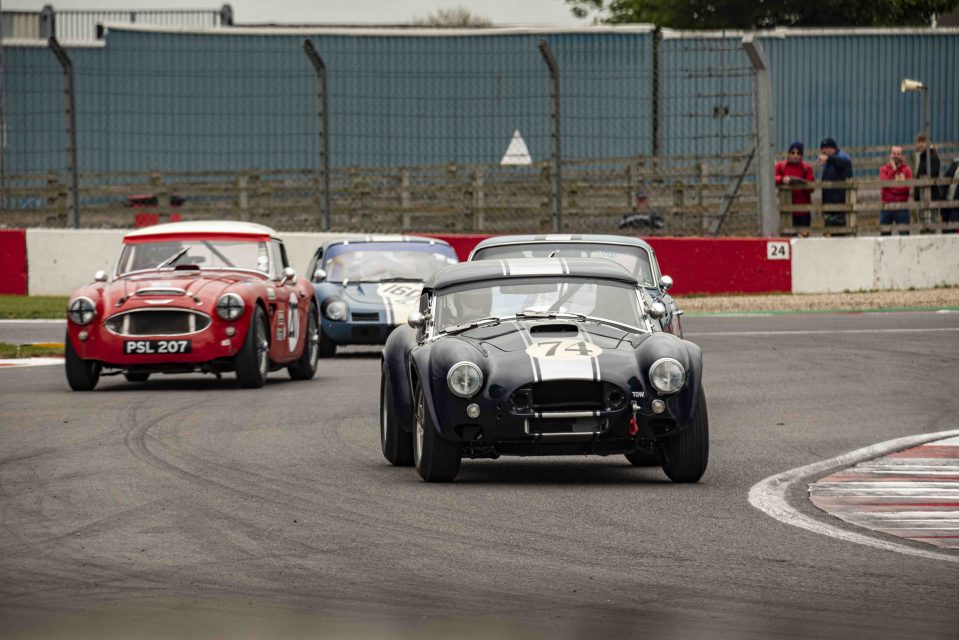 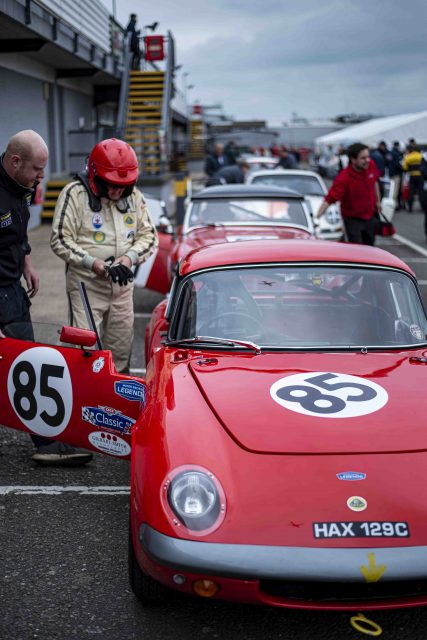 The weekend ended on a high note with the three-hour spectacular that is the Royal Automobile Club Pall Mall Cup. Victory went to the Jaguar E-type of Jon Minshaw and Phil Keen, who finished one lap clear, after inspired pitstop tactics rewarded them with a one-lap lead. The Shelby Cobra of Chris Chiles Snr. and Chris Chiles Jnr. came in in second place, while Roy Alderslade and Andrew Jordan brought Roy’s mighty Shelby Daytona Cobra Coupe home in third position. 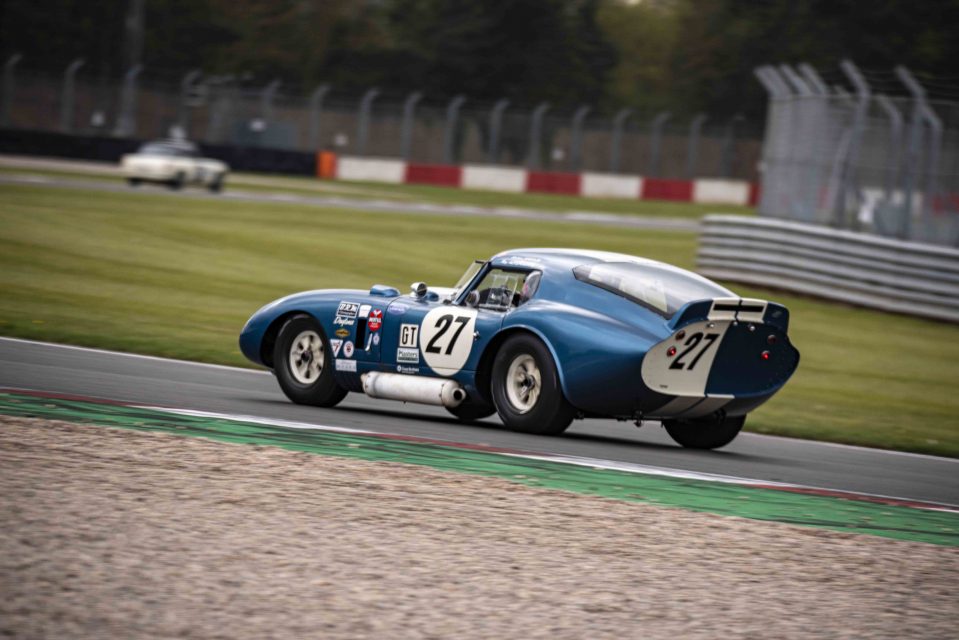 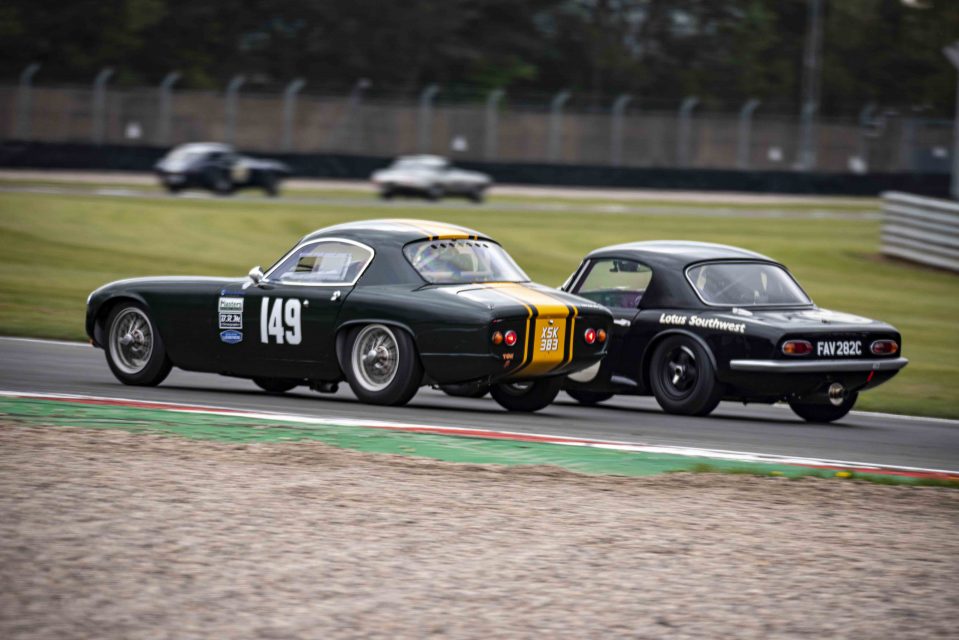 Next year the Donington Historic Festival returns to its traditional three-day format, bringing even more grids and even more variety to the action-packed timetable. For further information please visit www.doningtonhistoric.com, follow DHF on social media or sign up to the email newsletter to be the first to hear the 2023 dates.

Images are thanks to Full Throttle Photos – Oliver Flower – To contact him for reprints/ usage/permissions please follow the link.