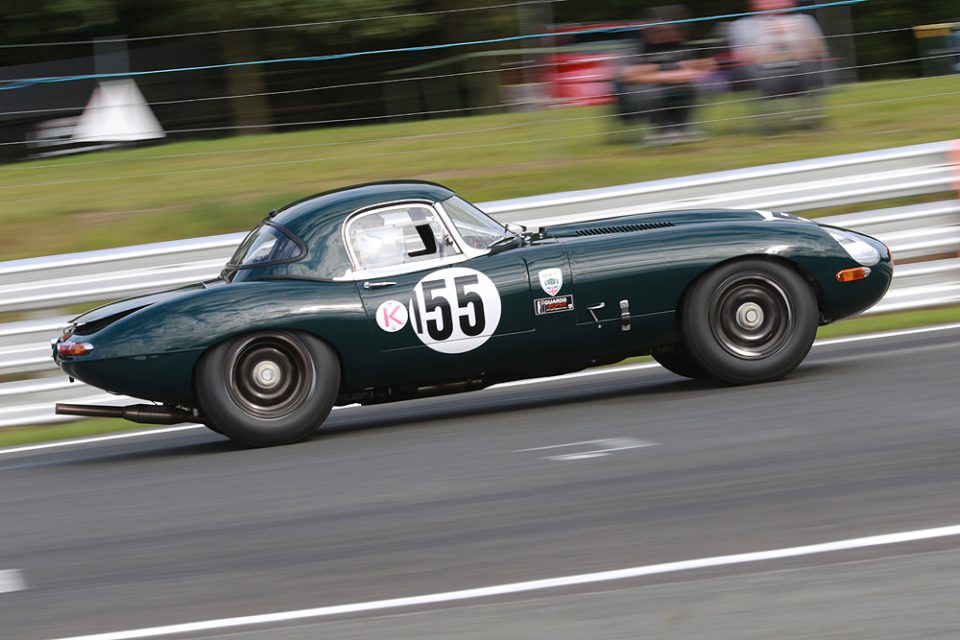 The crowd, limited by number, was socially distanced and across the venue all relevant precautions were taken. Sadly, that necessarily included closing the paddock to spectators as venue owner Motorsport Vision laid the foundations for an excellent weekend of racing. 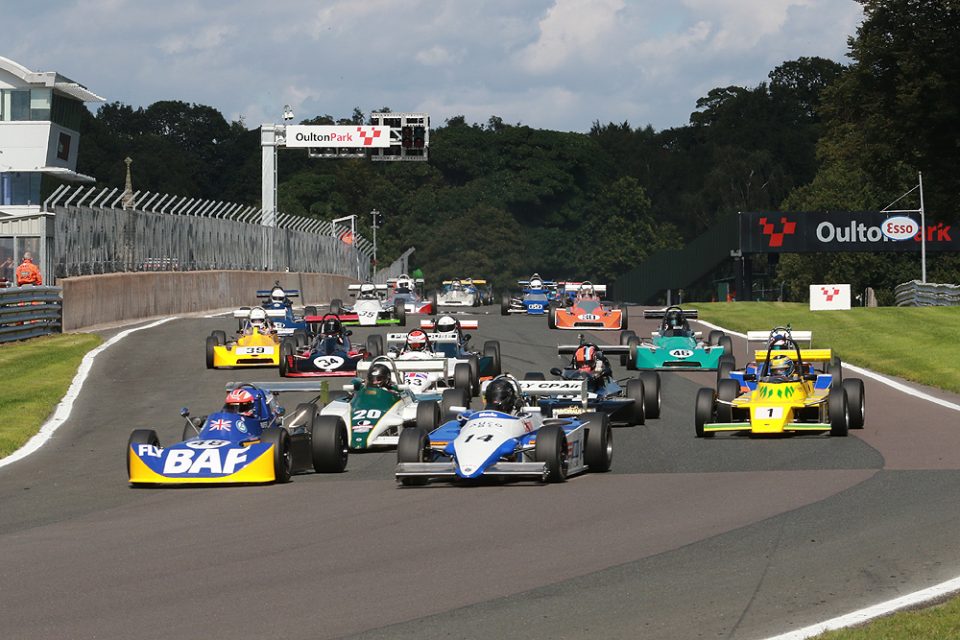 Other highlights included a Thundersports victory for local ace Tom Bradshaw (Chevron B19), two Historic Touring Car victories for former rally driver Peter Smith (Lotus Cortina), a Road Sports double for Kevin Kivlochan (Morgan Plus 8 and AC Cobra) and a hard-fought Pre ’66 Jaguar win for Jonathon Hughes. On his first race in the car, Tom Smith took a mighty Aurora Trophy double in the Formula 2 March 742 of Richard Evans, while the return of the ex-Ronnie Peterson March 722 of Nick Pancisi was a real crowd pleaser. 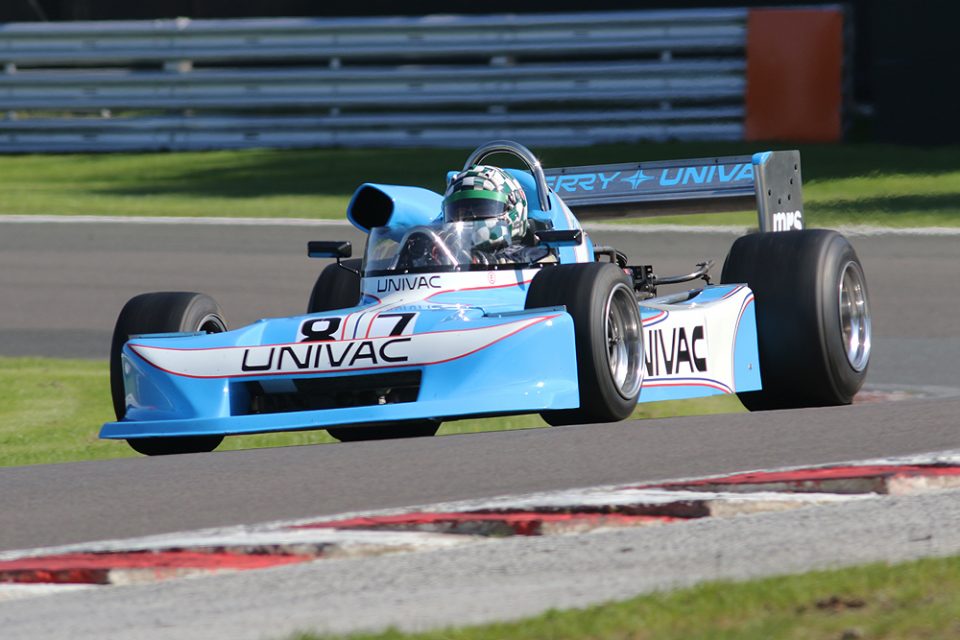 Cam Jackson won three races, including Sunday’s two Formula Junior races which marked 60 years of the category at Oulton Park. To celebrate this landmark, the famous Gold Cup trophy was presented to the Lincoln racer. 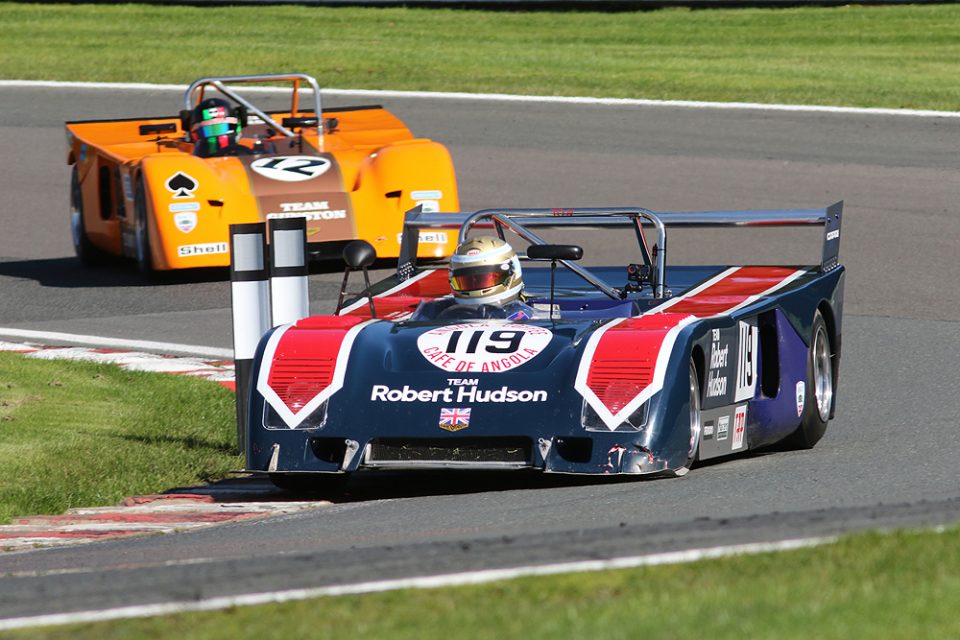 Tilley took his F3 double in the ex-Rupert Keegan March 743 but had to work very hard in the second race to overcome the fast-starting Ralt RT3 of Steve Maxted. With a determined pursuit, Tilley closed down the Ralt and edged ahead as they ran side-by-side from Shell Oils Corner to Britten’s. In the concurrent URS Classic FF2000 contest, Ben Stiles survived a broken damper and the challenge of Tony Hancock (Van Diemen RF82) and Callum Grant (Delta T78) to take two more wins. 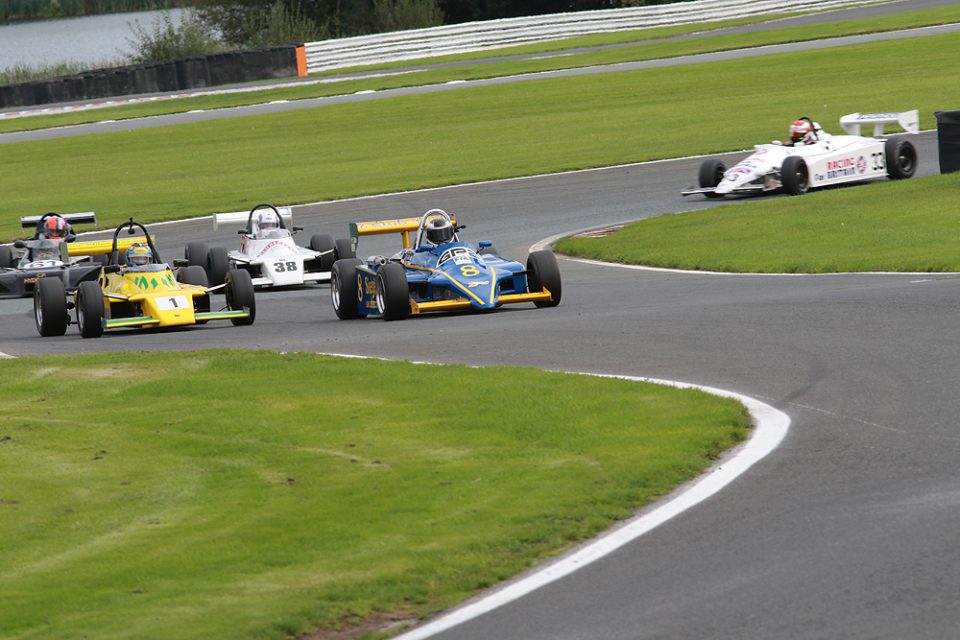 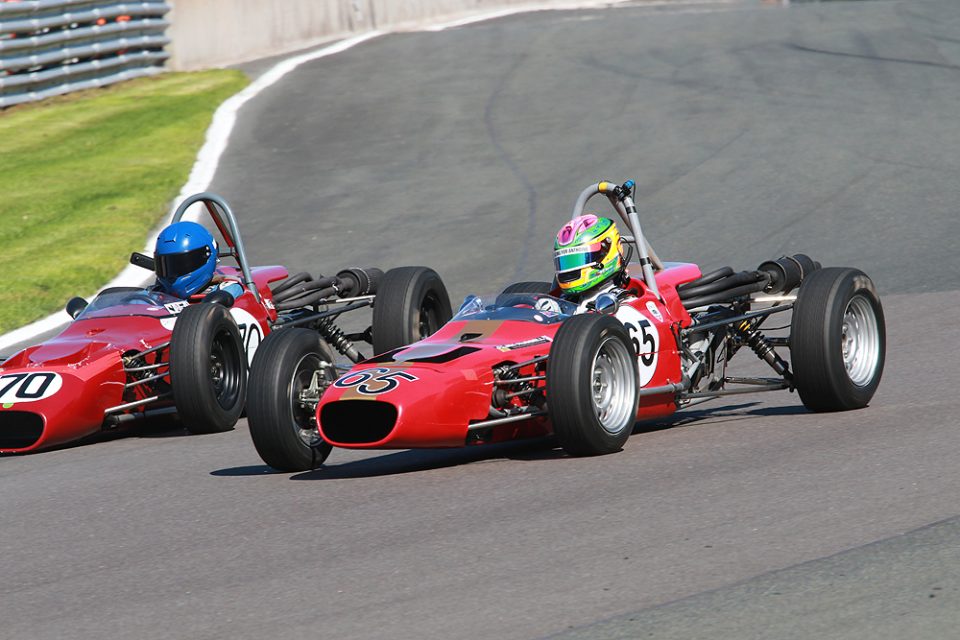 Livingston had a breakthrough weekend in Historic Formula Ford, winning twice against tough opposition. On Sunday, the young student had to contend with a relentless challenge from Linton Stutely (Royale RP3) but held his nerve for a first win in the championship. On Monday he got the jump at the start and immediately broke the tow to his rivals and was able to race clear as Cam Jackson, Stutely and Tom McArthur battled mightily for second. 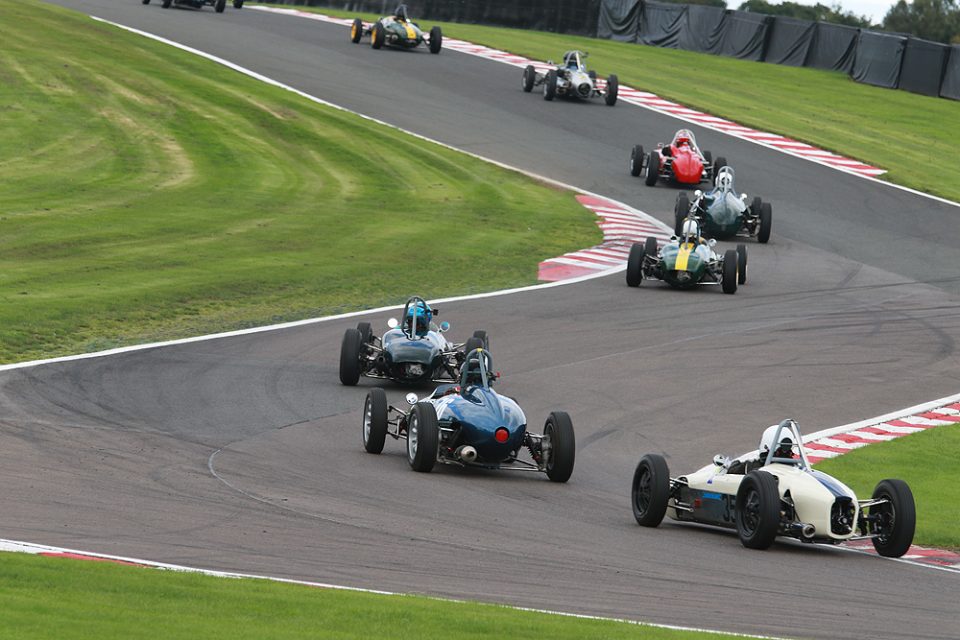 The HSCC Thundersports grid was a real crowd-pleaser although gearbox problems in qualifying prevented Dean Forward racing the stunning McLaren M8F. Instead, his team went back to Huddersfield on Saturday night to collect the Chevron B19 of Jamie Thwaites and Forward started from the back of Sunday’s grid. Up front, without the pole-winning McLaren, Tom Bradshaw dominated the race as Forward battled up to fourth behind Steve Worrad in the vast Can-Am March 717 and James Claridge (Chevron B23). On Monday, Bradshaw was out on the first lap with broken drive pegs on a rear wheel and Goncalo Gomes took over Claridge’s Chevron to get the better of Forward as Martyn Donn (Coldwell) completed the podium. 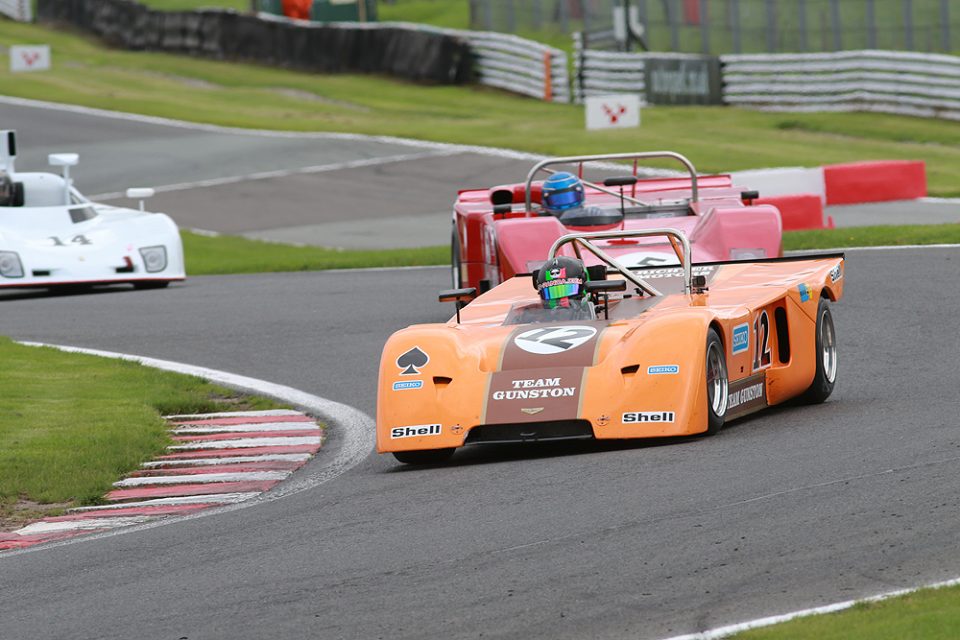 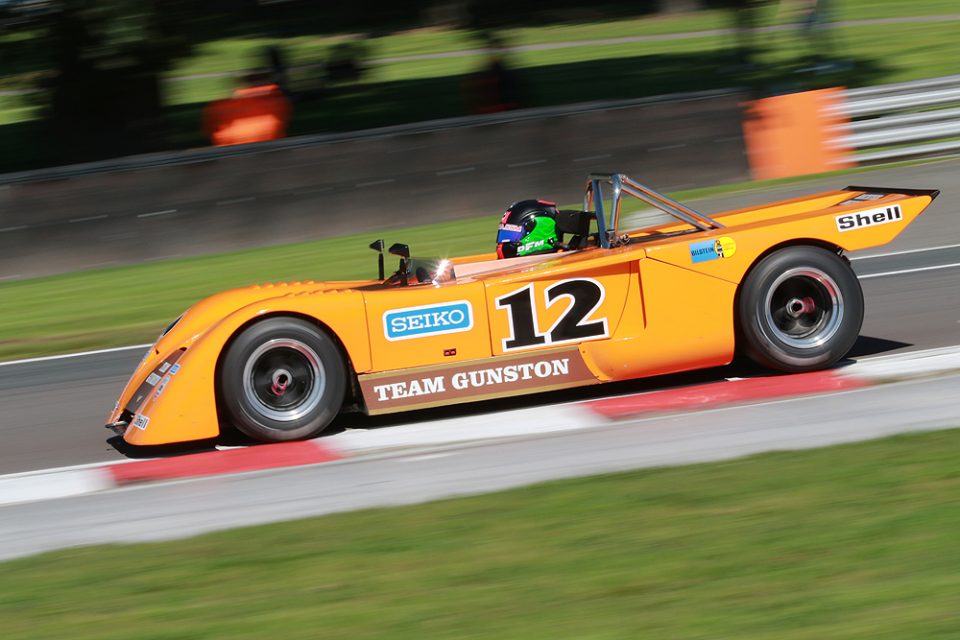 Tom Smith had never raced the F2 March 742 of Richard Evans before the weekend but drove superbly to take an Aurora Trophy double. In the opening race, Dan Eagling led the chase in his GRD 273 as Bolton racer Callum Grant took a fine third first time out in his Formula Atlantic March 79B. On Monday, Eagling was an early retirement so Grant moved up to second in an impressive debut weekend in the car. 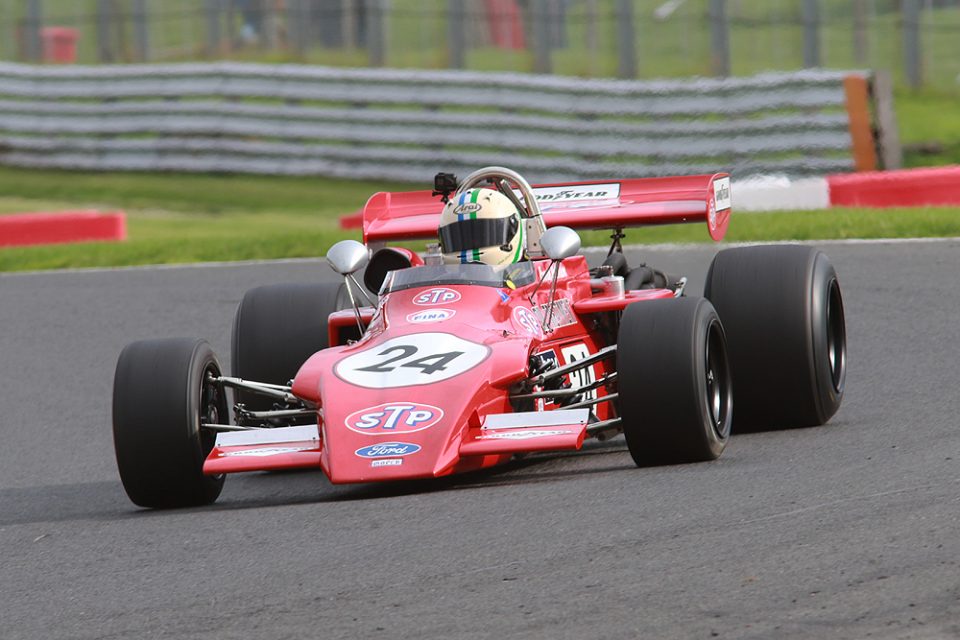 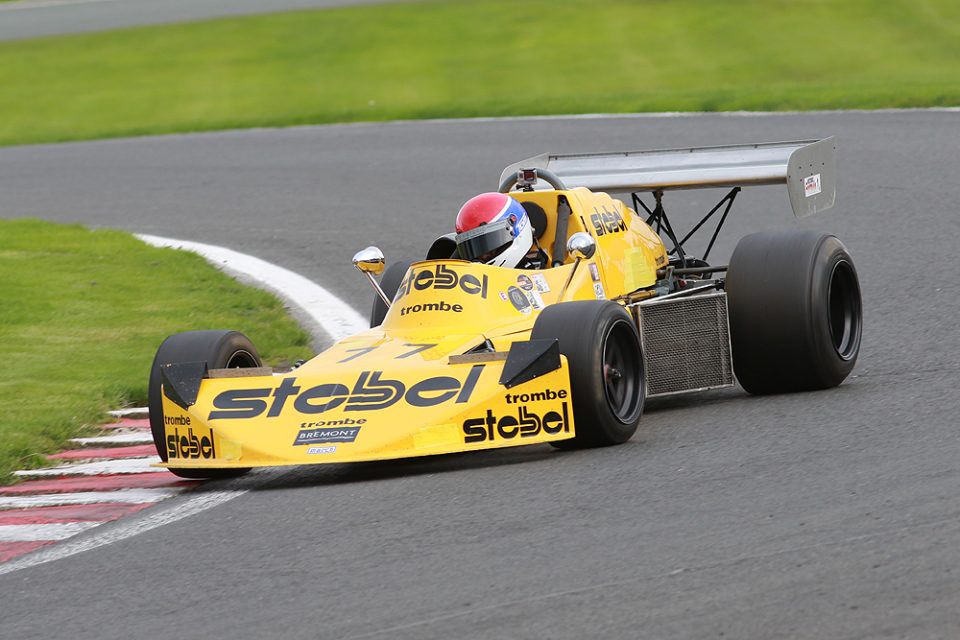 The man to beat in the FJHRA/HSCC Silverline Historic Formula Junior Championship continues to be Cam Jackson in his superb Brabham BT2 and he duly made it four wins from four races this season. Major rival Mark Shaw (Brabham BT6) retired from the opener and it was Sussex tree surgeon Clive Richards who moved up to second in his Lotus 22. 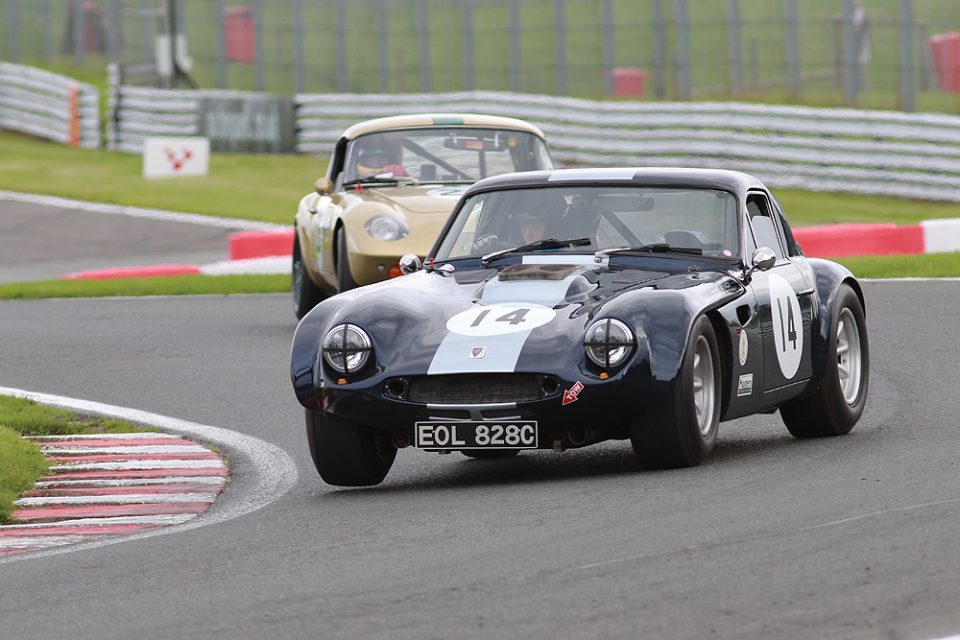 Kevin Kivlochan had a fine day on Sunday, winning both half-hour Road Sports races. In 70s Road Sports, Jeremy Clark out-qualified the Morgan Plus 8 but Kivlochan swept ahead on the first lap rush alongside Lakeside to Island Bend. The battle for third place was a real highlight as John Williams (Porsche 911SC) and Dave Karaskas (TVR 3000M) had a race-long dice and traded the place several times before Williams narrowly took the place. 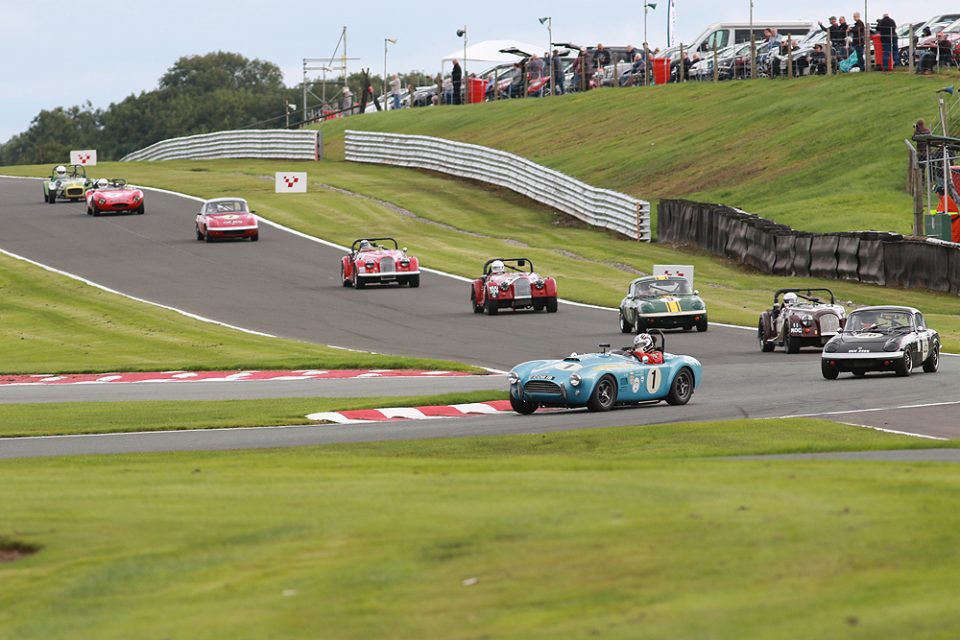 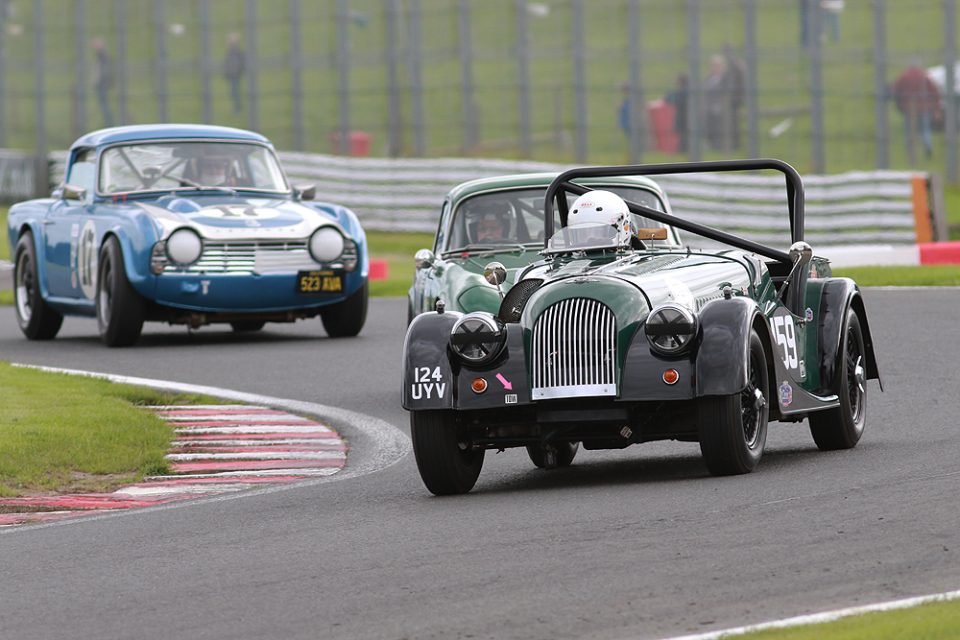 In the later Historic Road Sports thrash, John Davison chased KK’s AC Cobra early on before retiring with a sticking throttle as a fabulous contingent of Morgans packed out a bumper grid. Richard Plant (Morgan Plus 8) ran second for much of the race with Peter Garland’s similar car in pursuit and when Plant retired Garland moved up to second from the Lotus Elan of Jonathan Rose. 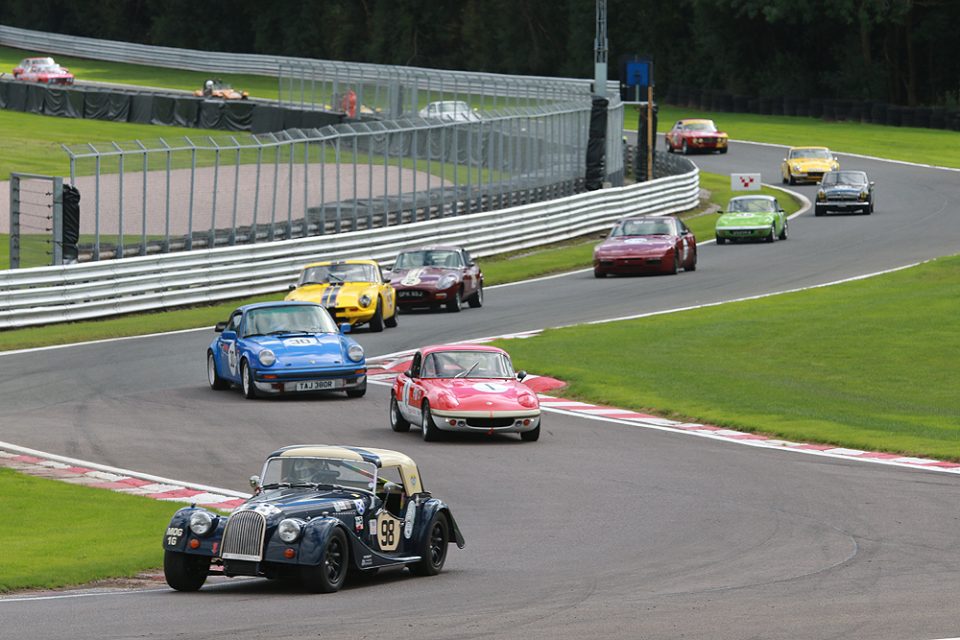 Contenders in the HSCC Historic Touring Car Championship had two races on Monday and delivered some typically crowd-pleasing action. In the opening race, Philip House led the field home but was handed a 10-second penalty for a false start and so Peter Smith took win in his Lotus Cortina. Though he has driven rally cars at Oulton Park, this was Smith’s first race at the track and he battled up from eighth on the grid. Later, Smith won again but was almost caught on the line by Richard Belcher, who had worked his Cortina up from the back of the grid after retiring in the first race with a detached fan belt. 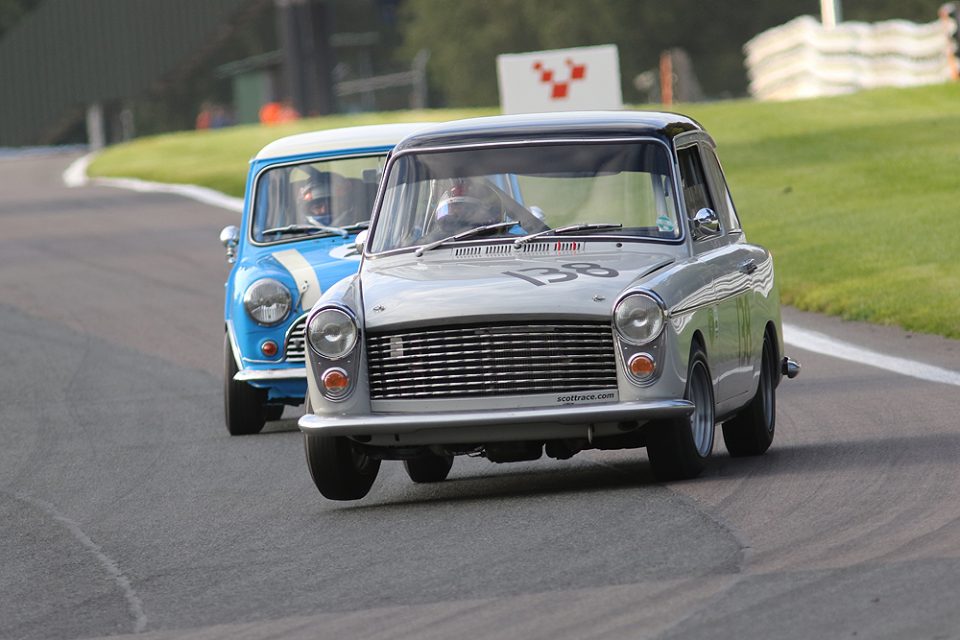 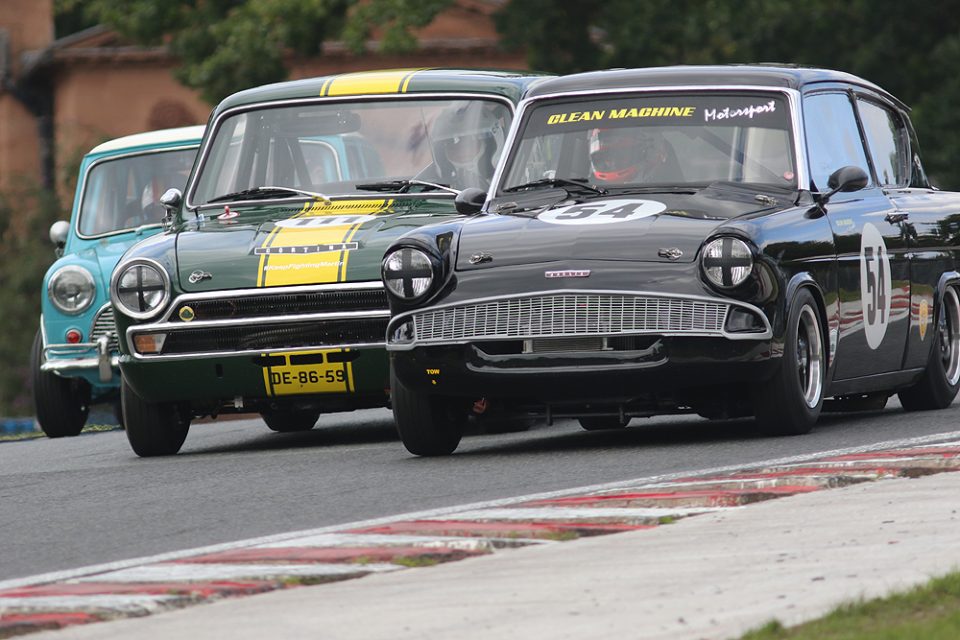 Later Touring Cars contested two races for the Dunlop Saloon Car Cup and there was victory in the first race for the fire-breathing Nissan R32 of local ace Ric Wood. Jason Hughes (Vauxhall Vectra) pressed Wood hard in the first race and then won on Monday when Wood retired with a blown turbo and Simon Garrad had to ease his pace in his Nissan. 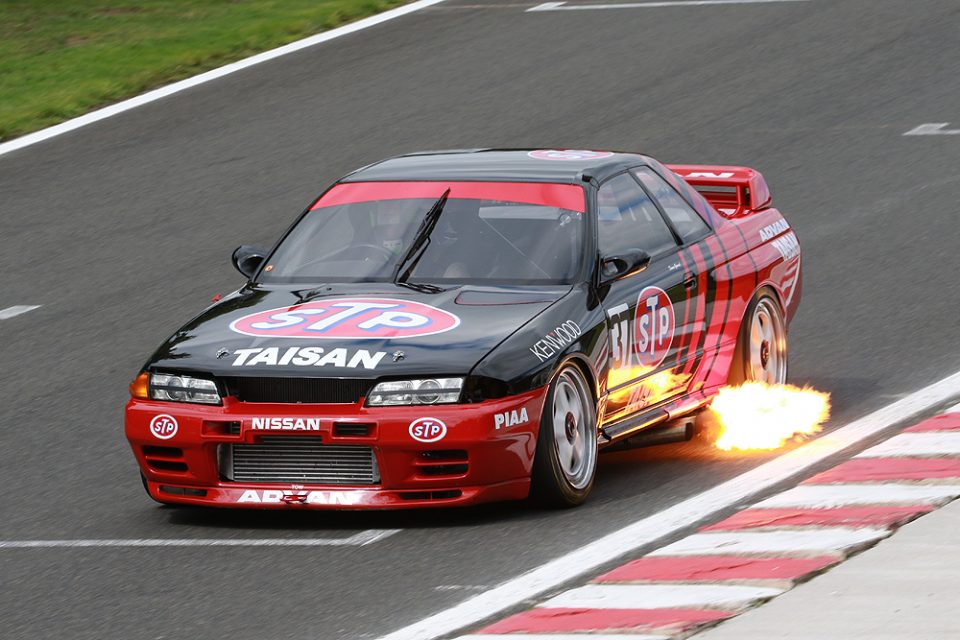 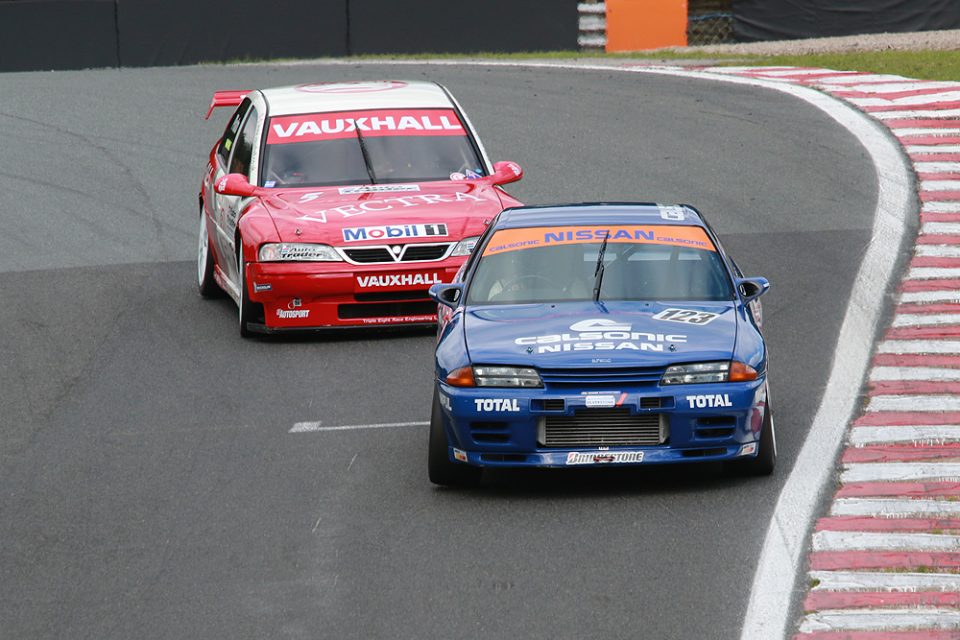 Andy Newall (Chevron B6) was the class of the Guards Trophy race and saw off the Brands Hatch-winning Chevron B8 of father and son Westie and Ben Mitchell, with Charles Allison third from another father and son pairing Hugh and Mark Colman. In the GT division, pit stop penalties came into play but the final result was a win for John Davison (Lotus Elan) over John Spiers (TVR Griffith). 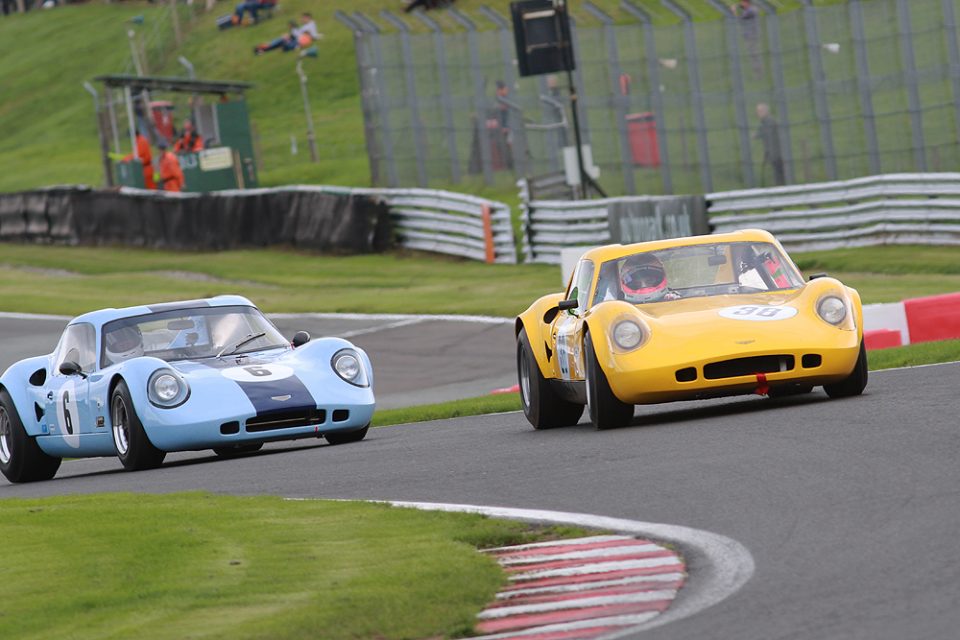 Fresh from a Formula Junior victory at Mallory Park a week earlier, Jonathon Hughes took a hard-earned victory in the hour-long Dunlop Historic Trophy for Pre ’66 Jaguars. For most of the race, Hughes was locked in combat with the similar E-type of Jon Minshaw but after a couple of moments under braking for Lodge, Minshaw eased his pace in the final laps. 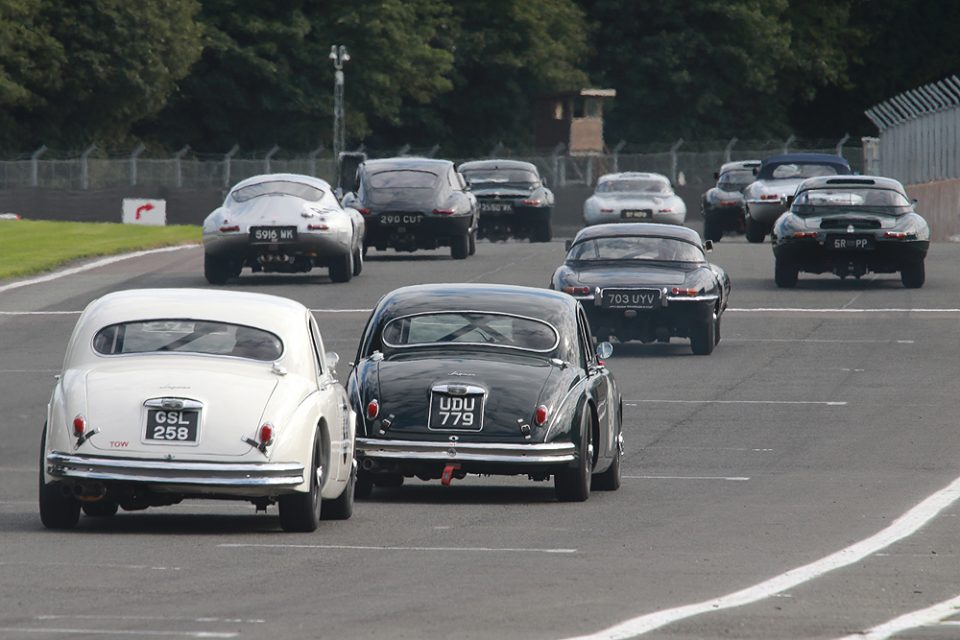 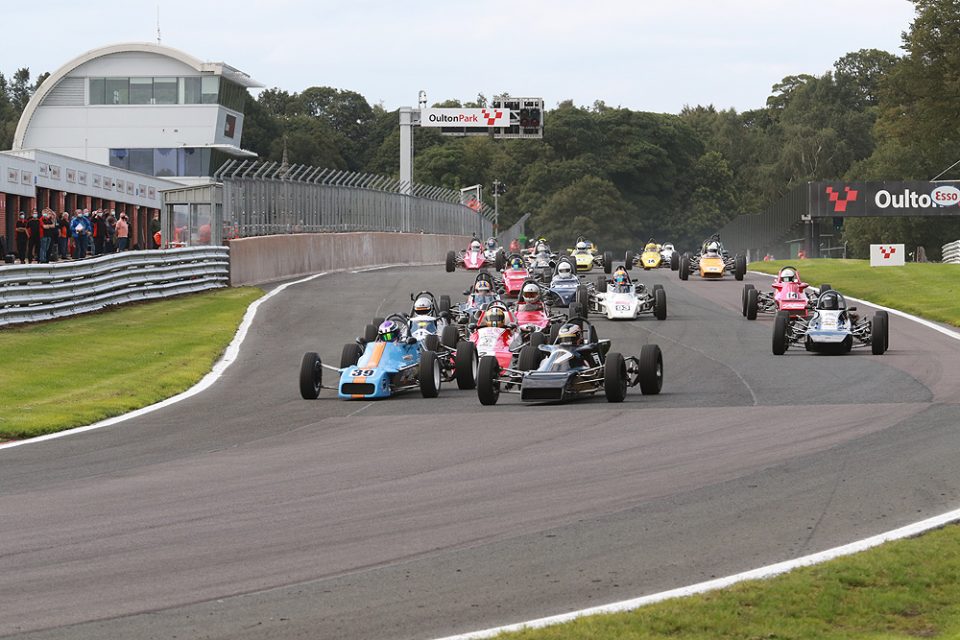 There was some tremendous racing in the Classic Formula 1600 Championship, although the first race was lost after two red flags. Stuart Kestenbaum’s Crossle 20F flipped at Hislop’s after a tangle of wheels, but he was thankfully unharmed. When the re-started race was halted for another incident, the race was abandoned. Later on, the second race ran to plan with some fine battling all the way down the pack as Cam Jackson (Van Diemen RF80) bagged his third win of the weekend by beating Mike Gardiner (Crossle 32F) by a tenth of a second after a fabulous contest. Henry Chart (Van Diemen RF81) took third, but only after a big battle with Samuel Harrison (Royale RP29).

Rounding out a very full weekend was a round of the Heritage Formula Ford Championship, with an open class added. Jordan Gronkowski won clearly as Tom Brown (Van Diemen RF91) won the Heritage division in second place.

Words and Pictures with thanks from Paul Lawrence

Our Website uses cookies to improve your experience. Please visit our Young guns star at HSCC Oulton Park Gold Cup page for more information about cookies and how we use them.