Steve Parrish – My Life as a Racer – Parrish Times

I was first aware of Steve Parrish as a small child, growing up in the same village of Steeple Morden in Royston as him. We used to regularly see his bikes whiz past going out of the village on a test run and occasionally Steve would use the school playground as a launch pad to do some donuts with an unsuspecting journalist in tow.

Needless to say, I found his latest book ‘My Life as a Racer’ a fascinating and hilarious read, even quite shocking in places. Steve talks with fond memories and a great deal of respect about his life long mate and fellow racer the late Barry Sheen, and by the sound of it they really were the terrible two-some of racing. Living life to the max and playing some really wicked practical jokes on pretty much everyone around them.

Steve talks about how it all started with Pourus Racing the team he formed with his mates from The Coach and Horses pub near Harston Cambridgeshire and how with the help of a few supporters his talent was soon recognised and it wasn’t long before he found himself competing on the World Motorcycle Championship stage with the legendary Barry Sheene as his team-mate.

For me his insight into what those big races were like was the most fascinating part as well as his honesty about how terrifying the TT races were and still are as a rider. Aside from laughing at some of the crazy jokes played on friends such as John and Charlie Brown amongst others which were  – it must be said  – slightly cringe worthy!

But all in all, Steve has enjoyed a full and fun life, his long career as a commentator after racing is testament to his fun charismatic character and well, it is no surprise he doesn’t hold back in any of the details here. Definitely an eye opener!  Sarah 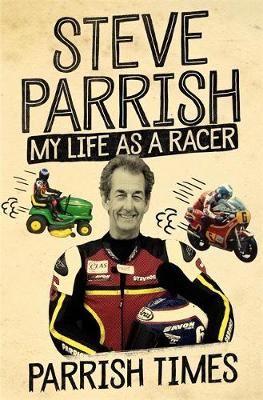 Our Website uses cookies to improve your experience. Please visit our Steve Parrish – My Life as a Racer – Parrish Times page for more information about cookies and how we use them.