Each year the Royal Automobile Club’s Historic Awards offer a chance to celebrate outstanding achievements within the British historic motoring world from a much-loved couple whose invaluable support will be well known to classic rallying crews, to an entrepreneurial young man already making his mark in the world of vintage motoring, the recipients demonstrate the depth and breadth of the historic motoring movement.

Whilst lockdown prevented the awards evening being held at the Royal Automobile Club in Pall Mall, the Club naturally ensured that each winner had their own special occasion and could celebrate in style. Trophies and champagne were delivered, with the delighted winners able to make their acceptance speeches from their individual locations in an online awards evening, streamed live on Thursday 28 January.  You can catch up here!

And the winners were…

The winners of the Lifetime Achievement award are Peter and Betty-Ann Banham. For decades, this highly skilled and endlessly enthusiastic duo have been the backbone of historic rallying. Acting as a ‘sweep crew’ and working mechanical miracles on innumerable events in the UK and overseas, the couple are responsible for getting hundreds of cars and drivers to the finish and really are the unsung heroes of the sport. 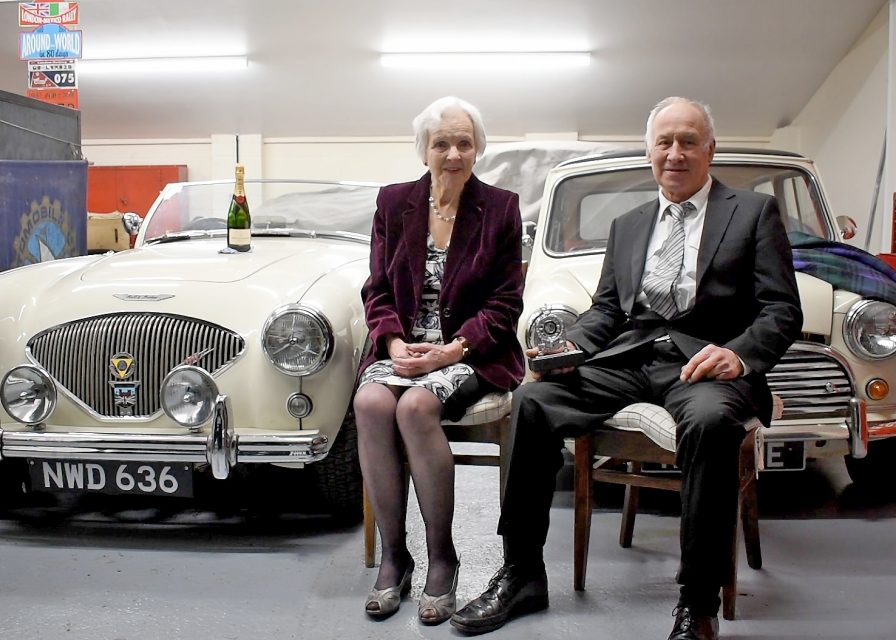 The Collection award (supported by Footman James) was won by the British Motor Museum for its impressive performance during the lockdown of 2020. Its team kept the museum active and accessible to the public with a prolific online presence, which included the staging of an entire exhibition.

In a year in which many motorsport events were cancelled, and those that did run were presented with new and unprecedented challenges, the judges in the Competitive Event category nevertheless had a superb selection to choose from. The award went to the 2020 HSCC Legends of Brands Hatch Super Prix. This ran on the second weekend after the permitted return of racing at the start of July and, more than any other, was the event which showed that major historic race meetings could run to the ‘new normal’ of COVID rules.

The winner of Motoring Spectacle was an innovate hybrid of an online and a physical event. Classics for Carers – the brainchild of automotive photographer and writer Nick Chivers – was a ‘stay at home’ motor show to raise funds for NHS charities as participants displayed their classic cars on their own driveways during lockdown. With an original target of around £1,500, the event eventually brought in £17,500. Raising spirits as well as funds, it brought communities together while respecting the all-import social distancing rules.

Gary Pusey’s painstakingly researched and expertly written story of the pioneering African wildlife conservation efforts of Ted Reilly, and the extraordinary role played by his Land Rover Jezebel, which was published in Land Rover Monthly, won the Outstanding Journalism category.

For her tireless work in securing dozens of historic motoring apprenticeship opportunities – even during lockdown – Operations Director for the Heritage Skills Academy, Janice Pitchforth, won the Personality award (supported by HERO-ERA). Janice has been singularly instrumental in promoting and developing apprenticeships throughout the Heritage industry and has restored the faith of a disillusioned industry in the potential and commitment of a new generation of engineers.

The winner of the Race Series award (supported by A. Lange & Söhne) was the GT & Sports Car Cup. During 2020 its races featured large entries of cars of exceptional quality. Driving standards, particularly in the very wet race at Castle Combe, were exemplary, with the owners playing a major role by having to drive for at least 50% of the distance rather than relying too much on ‘the professionals.’

The award for Restoration (supported by Bicester Heritage) went to the quite remarkable restoration of the 1948 Land Rover JUE 477 by Ineos Automotive and Julian Shoolheifer. Beginning with a vehicle which had languished on a Northumbrian hillside for decades, they took the brave decision not to over-restore and went to incredible lengths in order to retain as much of the original example as possible. In addition, the judges chose to select the 1954 Lancia Aurelia B20 GT for a Special Mention, not just because of its now-stunning condition but also as its restoration was entirely managed and undertaken by a small group of young apprentices at Classic Motor Cars (CMC).

Finally, the future of the historic motoring and motorsport world rests in our young people, and the winner of the Young Achiever award (supported by 1762 from Brewin Dolphin and StarterMotor), is 24-year-old Jack Bond. Jack already has 16 years of Vintage Sports Car Club membership under his belt – at age 14 he was campaigning his family’s 1926 Bullnose Morris. In addition to competing, he works at Tip Top Engineering and recently cast, machined and sold his own run of Morris cylinder heads.

Ben Cussons, Chairman of the Royal Automobile Club, said: “With a turnover of £18 billion and providing employment for 113,000 people, the sizeable contribution the UK’s historic motoring and motorsport world makes to Britain’s business and leisure industry should not be underestimated, and there has never been a better time to be rewarding success in what has been an extraordinary year.

“From keeping businesses active to producing events when all the odds were stacked against the organisers showed such determination. There was also an impressive line-up of online activities within the entries, which just reinforced how resilient and innovative the industry has been in keeping the wheels turning.

“The standard of entries this year has been superb and the judges, who are central to the integrity of the awards and experts in their fields, had a tough time honing them down to the finalists. I am especially encouraged by the quality of nominations for the Young Achiever Award; new for this year, it really highlights the passion amongst the young guns for the industry.

“I would particularly like to congratulate Peter and Betty-Ann Banham, the recipients of this year’s Lifetime Achievement Award. Their outstanding contribution to the historic rallying community and the support they have given competitors for decades is overwhelming and just highlights those unsung heroes behind the scenes keeping the engines running.

Their extraordinary feats eclipsed only by the enormity of their goodwill, exceptional teamwork, charitable spirit and industrious approach are not only etched in the archives of historic rallying but in the anecdotes of thousands of competitors whose days they have saved.

“It’s now upwards and onwards to tackle 2021 and be back here on Thursday, 25 November, celebrating in style the achievements of this year.”

Our Website uses cookies to improve your experience. Please visit our Celebration of UK’s Historic Motoring World page for more information about cookies and how we use them.