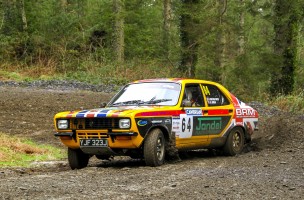 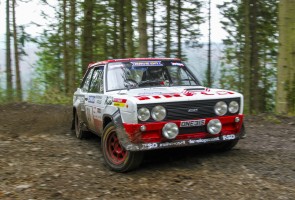 UK historic rallying 2016 started with the Cambrian Rally in north Wales last weekend receiving  16 entries for the Historic section of the event. As has become normal all but two were Escorts of various specifications but the two that weren’t were just a bit special.  Kevin Theaker of RSD in Malton, North Yorkshire, best known for building running the Escorts of Steve Bannister and Matthew Robinson, has been toiling away for a number of years with the most exciting project ever to grace British events, a Group 4 Fiat 131 Mirafiori. Julian Reynolds took the first of the five cars that now exist to 3rd overall on the 2014 RAC Rally but the team decide after that success to regroup and develop the car a bit further before it appeared again.

On the Cambrian the top Historic seed was the ever exciting Matthew Robinson, with Sam Collis beside him, having the first outing in his 131. The production of this wonderful car has not just been a matter of opening the parts book and ordering every part needed to build the car. Virtually every engine component along with a vast number of other parts had to be made from scratch and MSD now are ready to sell new cars to customers and guarantee a full parts back up.

Things looked to be going quite according to plan when on the first stage Robinson was only  two seconds slower that the BDG Escort of Jerry Bailey/Graham Lacey but the plan didn’t continue on the second stage with little niggles costing many seconds. The car finally retired on SS6 when a large rock in the middle of the road smashed the diff casing.

The other interesting car was the 1600 cc Avenger BRM of Baz Jordan and James Grattan –Smith. In the seventies the factory team tried so hard to get the BRM engine to work and provide competition for the all-conquering Escorts. Unfortunately the cylinder head port angles limited power to just over 220bhp, but the world of engine building has changed and Baz tasked Jondel engines with rectifying the problem.  Baz now has two BRM engined cars, one a two litre with over 240 bhp and the other a 1600 which was the car he had on the Cambrian. Unfortunately mechanical problems intervened again and retirement beckoned on the third stage.

While all this mayhem was going on Leominster’s Theo Bengry and Les Forsbrook in their Escort were chasing Bailey hard and eventually overtook to win by 37 seconds.  The 2 litre class was won by yet another Ford, this time the Pinto engined car of Dave Forrest and Charlie Carter, Dave being the MD of Leeds Porsche independent, Strasse. Robin Shuttleworth/Ronnie Roughead in a Mk 1 Mexico took the 1600 class.

This weekend sees the first round of the BHRC, the Red Kite Rally based in Llandovery which uses the forests of Crychan and Caio and the famous Route 60 gravel road on Epynt.