Silverstone Auctions have some rare and interesting cars for sale at this weekend’s online auction scheduled for 31st July and 1st August. We pick out our favourites:

Amongst the classic competition cars we chose the following: 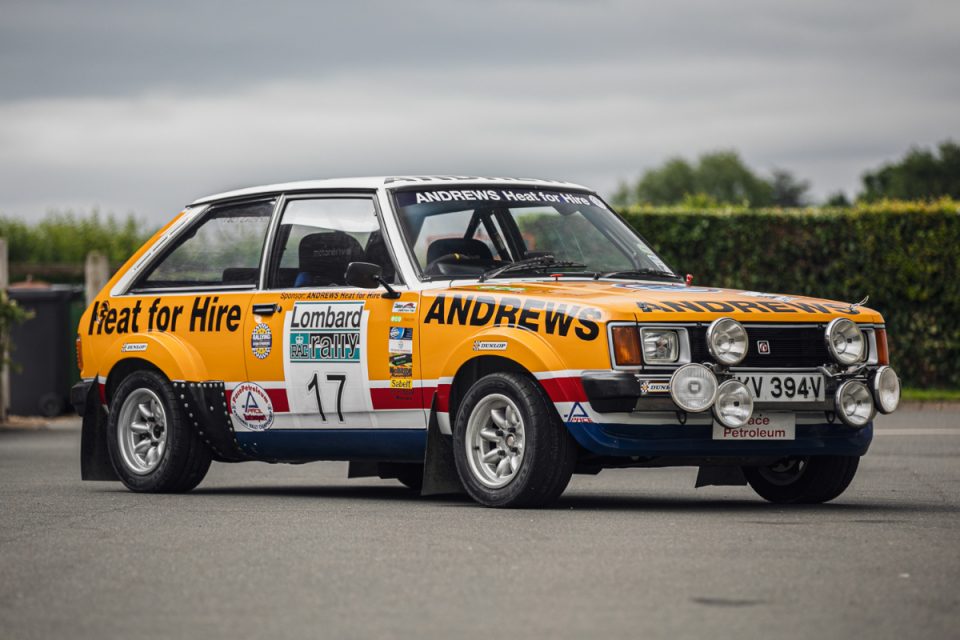 1981 was a milestone in the World Rally Championship, it was the start of the four-wheel drive era and Audi were back on the scene. However, Britain’s Russell Brookes and co-driver Mike Broad were to compete in the championship with the Talbot Lotus Sunbeam.

Russell had agreed to join Talbot in a Mike Little prepared car for the 1980 and 1981 seasons with his long standing and most successful sponsor, Andrews Heat For Hire. 1981 was a great year for Talbot taking the manufacturers championship.

This is Russell and Mike’s fully restored 1981 Lombard RAC Rally championship car which has more recently been used regularly in demonstration events. Since its retirement from the world stage Russell used it competitively on national events, his last being the Halloween Historic Stages in 2010. It was also used competitively by up and coming drivers and Ladies Rally Champion Louise Aitken-Walker.

This fabulous Talbot Lotus Sunbeam still retains its original running gear and is regularly maintained. The car is in full rally specification with an MSA passport and also many original parts have been kept and are offered.

Estimated at £100,000 to £125,000 this is a superb rally car and if our demo ride at Goodwood with Owen Murphy is anything to go by, in the right hands these cars are absolute little pocket rocket ships! 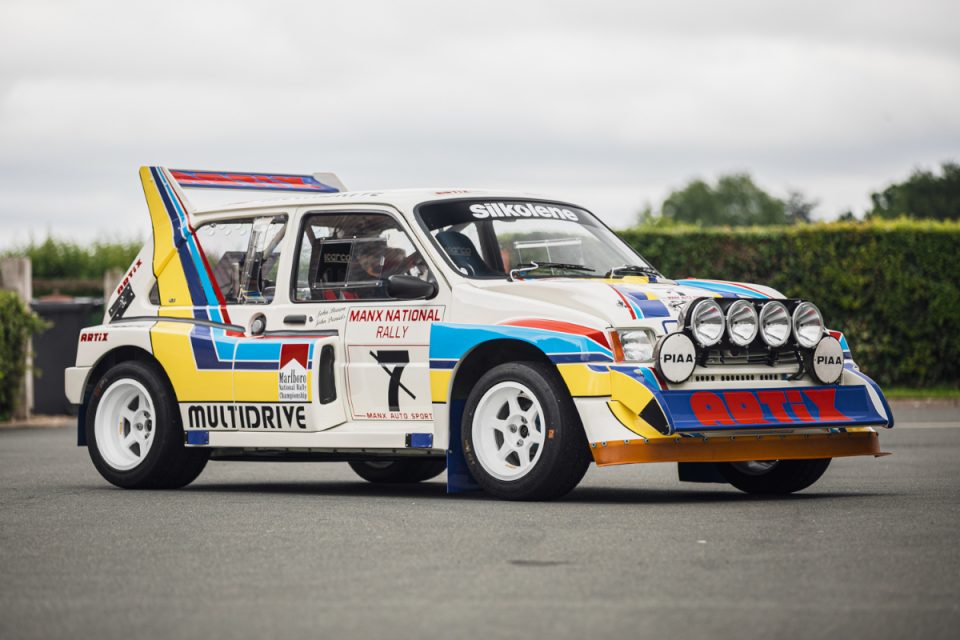 Love this car, I remember watching the rallying in the mid 80s and I think it was because we had a Metro, that we were always routing for the MG Metros to win.  This is one of the first works cars to be supplied by Austin Rover Motorsport to a privateer team, ARTiX Ltd.

Following the demise of Group B rallying the car was subject to the new rules and the 3.0-litre engine had its power performance reduced in line with these new regulations. However, this car still retains the unique micro-chip in the ECU which allows it to run at the higher pressure and more BHP.

The 6R4 was driven very successfully by John Brown in the British Rally Championship, taking several top places, but due to lack of development by Austin Rover the cars was sold on. It continued to be campaigned taking further victories and went on to be one of the most successful 6R4s.

The car underwent a full bare metal restoration about four years ago and is now presented in the original ARTiX livery. Many of the original features have been kept and restored and the Goodman 2.8-litre engine has been fully serviced and tuned by John Manklow, one of the original engine builders. 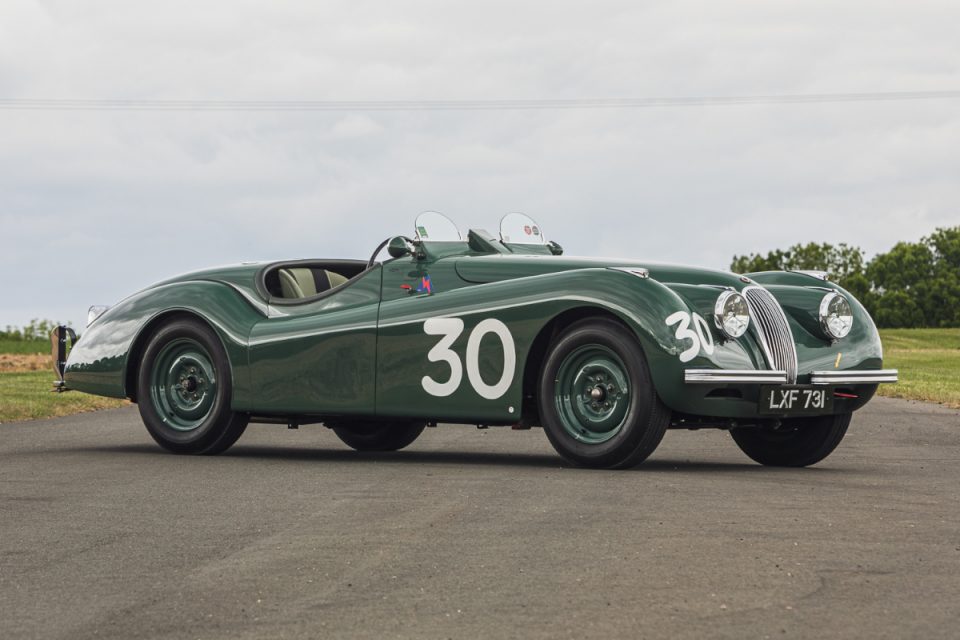 You have to admit, it is a beautiful car, apparently this one was fully restored back in 2011 and has been maintained ever since. Its first owner was an enthusiastic amateur race who happened to be friends with Duncan Hamilton. Upon collecting the car new, he entrusted it to Hamilton to test it out during 1951 at national and international meetings. For 1952 they both needed a faster car so decided to sell the XK120.

After it was sold, the Jaguar was still seen taking part in many competitions, including a spell in Ireland before coming back to the England in 1968. Estimated at £390,000 to £450,000 this is an historically important Jaguar with a comprehensive history file and raced by one of the most successful drivers of the 1950s.

For road car fun Porsche lovers will be getting their knickers in a twist over the 35 Porsches going under the hammer from the Stuttgart Collection. The cars are all beautifully kept an amazing group of hand-picked Porsches clearly that have been collated over many years, here are our favourites: 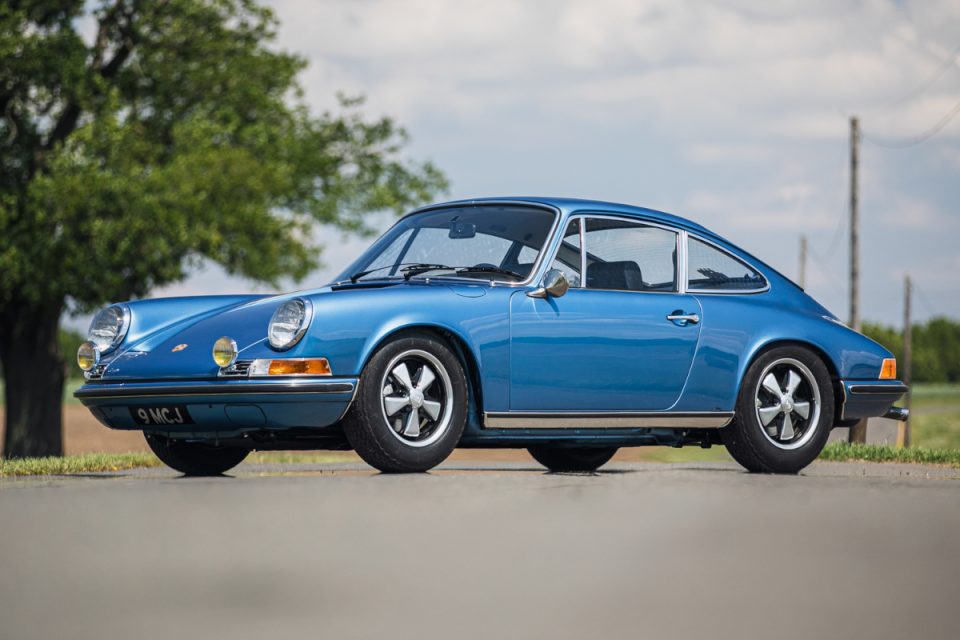 A matching numbers 911 S with rare factory options and the desirable non-sunroof, this is a top of the range Porsche and only 44 examples were sold in the UK in 1971. 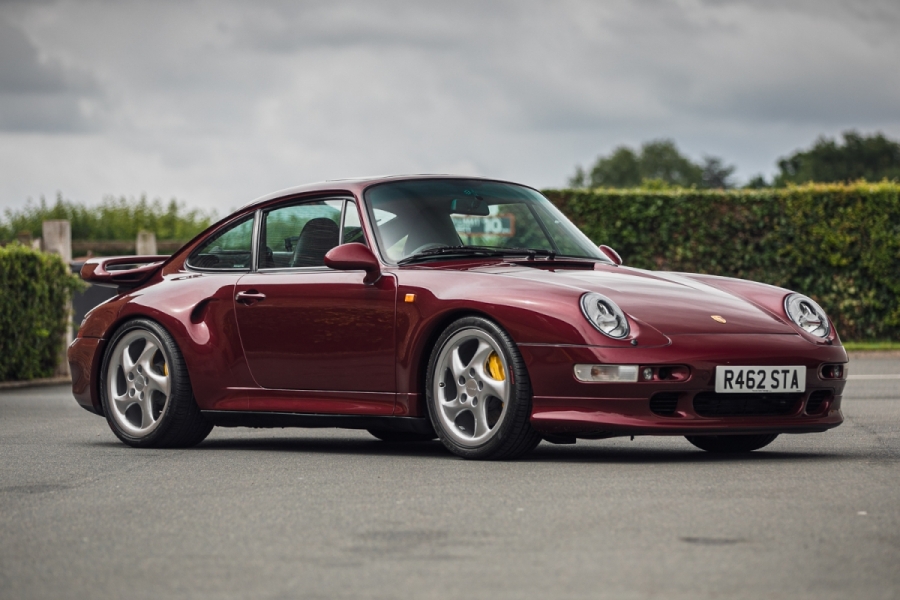 This is one of two 1998 911 (993) Turbos S’ being offered in this auction, but what a car great colour Arena Red, shame about the grey leather but I could over look that for the joy of owership I think! 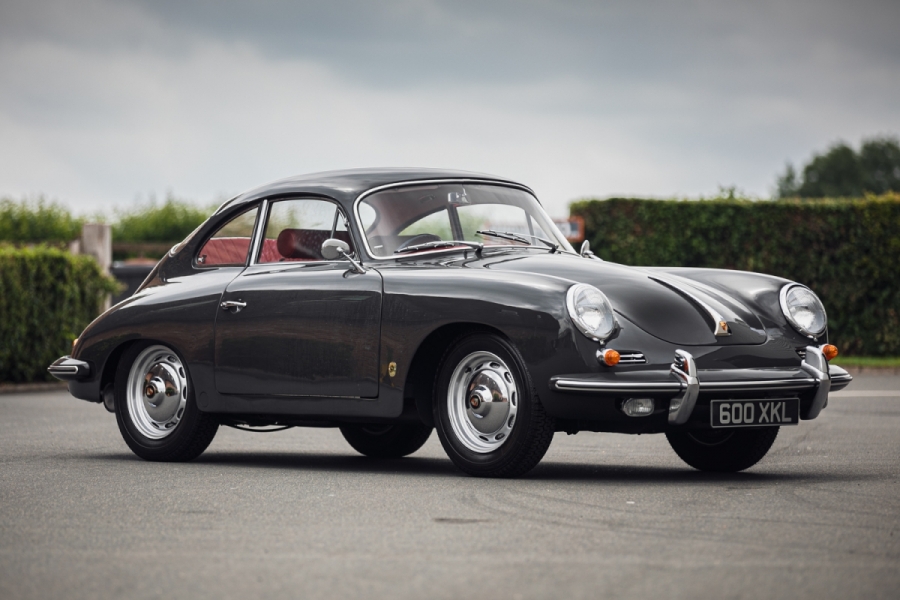 A personal collection goal of mine is to own one of these, and this is simply stunning 1963 356B T6 Super 90  – this one was supplied new by AFN in London.

The previous owner found the car and upon realising its significance, set about a full-ground up restoration. The aim was to return it to its original specification of Slate Grey with a Red leatherette interior and the engine was rebuilt, set up and tuned by Porsche specialists Andy Prill.

In 1989 this 356 was granted FIA Competition Papers and used on road rally events including Le Rallye de Monte-Carlo Historique three times in the 1990s. The extensive history file has pictures of the car on the rally, the original green and brown buff log books, old FIA papers and Porsche’s Certificate of Authenticity.

A matching numbers 1963 356B T6 Super 90 is an extremely rare and collectable car and at the time of consignment, this was the only right-hand drive car on the market.

What about the unusual ? 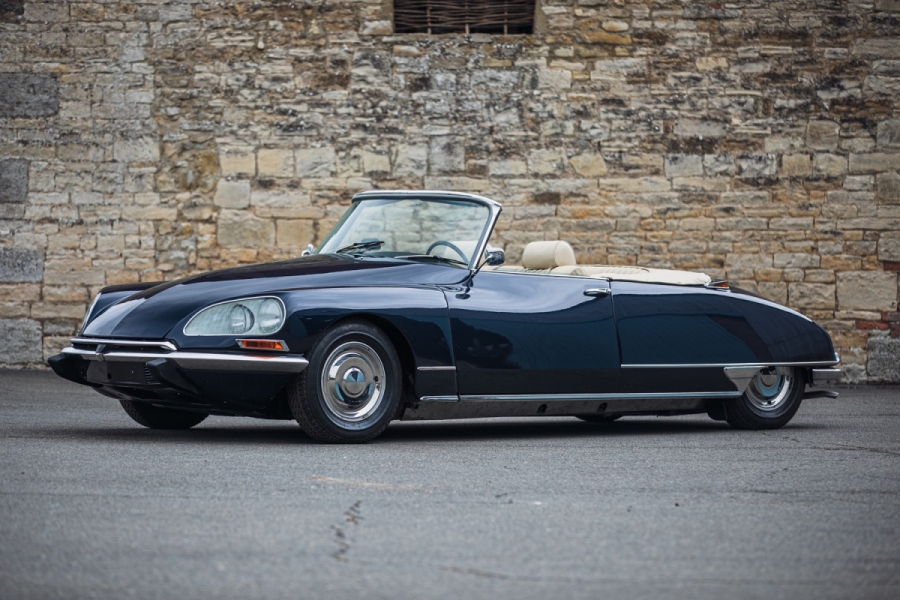 There are some amazing retro cool Citroens in the auction including this 1970 Citroën DS21 Decapotable Coachwork by Henri Chapron. The DS is an iconic name that has been attached to some fantastic designs and this Decapotable is one of them. A rare convertible that was sold new to Germany and had two owners prior to coming over to the UK where it gained an MOT in 2007. It then went to Hungary for a short while before coming back to the UK in late 2009. It has resided in this significant collection until now when it is to be auctioned for an estimated £90,000 to £105,000. 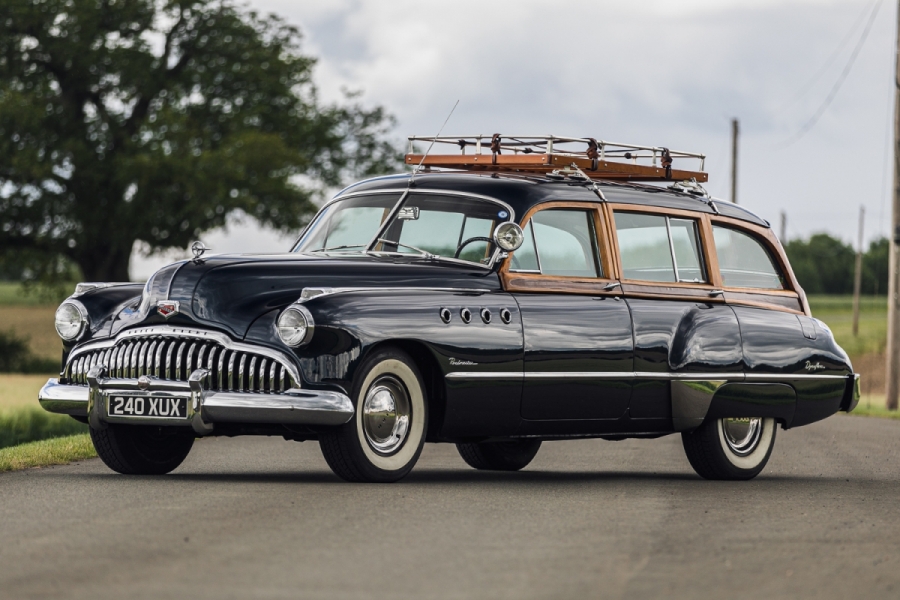 If you have a large family or like your classic cars on the large side, (think – Ghostbusters car ) then you may want to check out the various Woodies on offer including this  1949 Buick Roadmaster Estate Wagon or a 1973 Citroen DS23 Safari  not everyones cup of tea and indeed I may disown you as a friend if you buy either of these!

Silverstone Auctions are now booking appointments for those interested in viewing the Lots at their centrally located private storage facility.

They can be contacted on 01926 691141 or email enquiries@silverstoneauctions.com and would be happy to talk with you about any of the cars offered in the sale.

The auctions starts at 11am on both the 31st July and 1st August with a break for 15 minutes around 2.45pm on each day.

Our Website uses cookies to improve your experience. Please visit our The rare and unusual feature in this weekend’s Silverstone Auctions Sale page for more information about cookies and how we use them.