The Historic Sports Car Club organise one of the UK’s most prominent historic racing festivals of the 2020 season at this weekend’s Oulton Park Gold Cup (29-31 August), we take a look at the form. 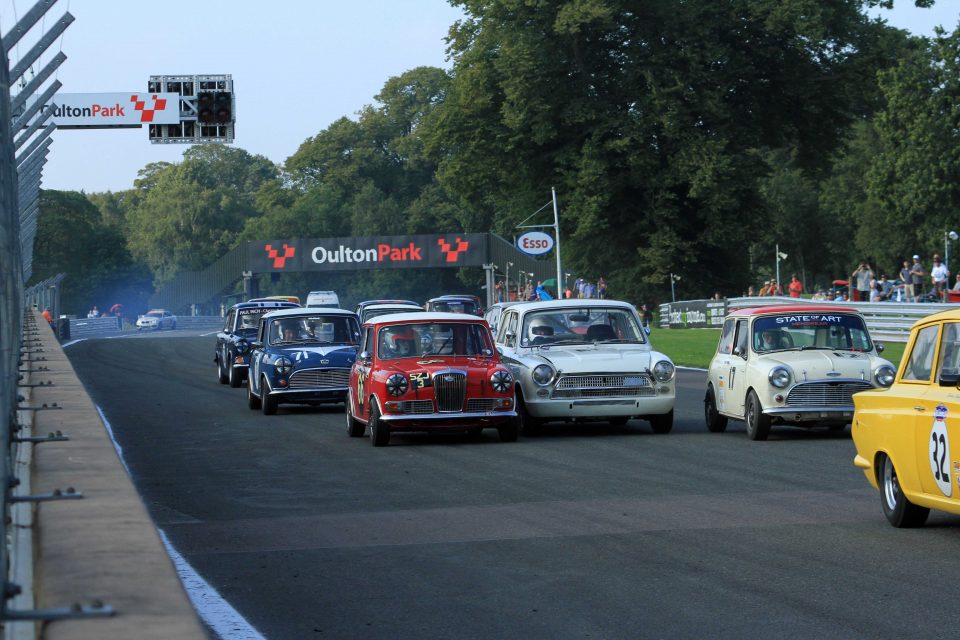 From a very full 21-race weekend, stand-outs will include two races for Formula Junior to mark 60 years of the category at Oulton Park. To celebrate this landmark, the famous Gold Cup trophy will be presented to the aggregate winner of the Formula Junior races.

The man to beat in the double-header for the FJHRA/HSCC Silverline Historic Formula Junior Championship is undoubtedly Cam Jackson in his superb Brabham BT2 after a double win at Brands Hatch. In fact, prolific winner Jackson will be bidding for a clean sweep of six wins in three cars this weekend. His chief rival, as at Brands, will be former Formula 3000 racer Mark Shaw in his Brabham BT6.

From the capacity grid, a strong front-engined field will deliver a race within a race and leading contenders will include Justin Fleming and Iain Rowley in Lola Mk2s and Mallory Park winner Jonathan Hughes (Terrier Mk4).

In the HSCC Historic Formula Ford Championship Jackson will continue his bid to win a third straight title in three different cars: this year is the unfashionable March 709. At Brands, Linton Stutley took the fight to Jackson in his Royale RP3 and two more mighty contests are likely. Joining the fray is rapid youngster Horatio Fitz-Simon who joins fellow front-runner Pierre Livingstone in the Speedsport squad, while Matt Wrigley, Rob Wainwright and Danny Stanzl all have podium ambitions. 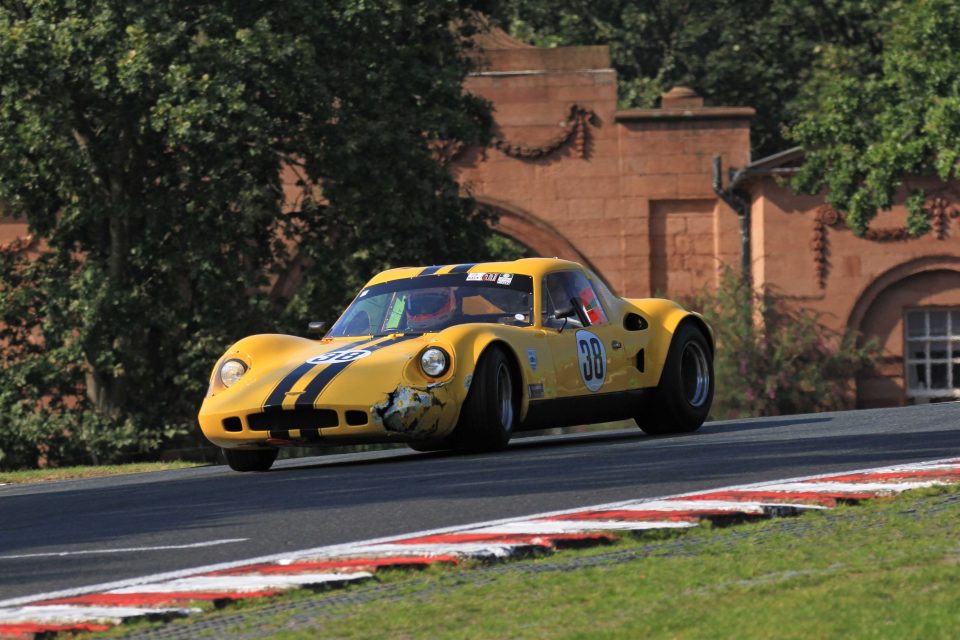 The HSCC’s Dunlop Saloon Car Cup builds on the former Super Touring Trophy to broaden the range of eligible cars. New on the grid will be experienced historic touring car racer Simon Garrad in his newly-prepared Nissan Skyline R32. After selling his Super Touring Renault Laguna to Germany, Garrad commissioned local engineering ace Ric Wood to build him a Skyline for use in the DSCC and this will be the car’s first race weekend.

Mark Wright is an established front-runner in his Ford Sierra RS500, BMW M3s are entered for Mark Smith and Nicholas Bartlett, while former BTCC racer Jason Hughes will be a pacesetter in his Super Touring Vauxhall Vectra.

Some of the most spectacular single-seaters of a generation will deliver the glory in two races for the HSCC’s Aurora Series, with a good contingent of Formula 2 cars. Matt Wrigley will be the benchmark in his March 782 and up against him will be another March 782 in the hands of F2 newcomer Brian Morris. This is the ex-Ghinzani car coming back to racing after a long lay-off.

Running within the Formula Atlantic class will be Bolton’s Callum Grant on his debut race weekend with his March 79B and his pace should be good despite the power disadvantage to the 2-litre F2 cars.

The Historic Road Sports Championship is typified by sporting competition from large and varied grids. Setting the recent pace has been current champion Kevin Kivlochan in his stunning AC Cobra. Kivlochan hoped to carry on where he left off at Brands last month but knew that the return to the grid of the Lotus Elan of John Davison was going to present a real challenge. Sure enough, Davison won narrowly at Brands and now that battle will be rejoined at Oulton Park. 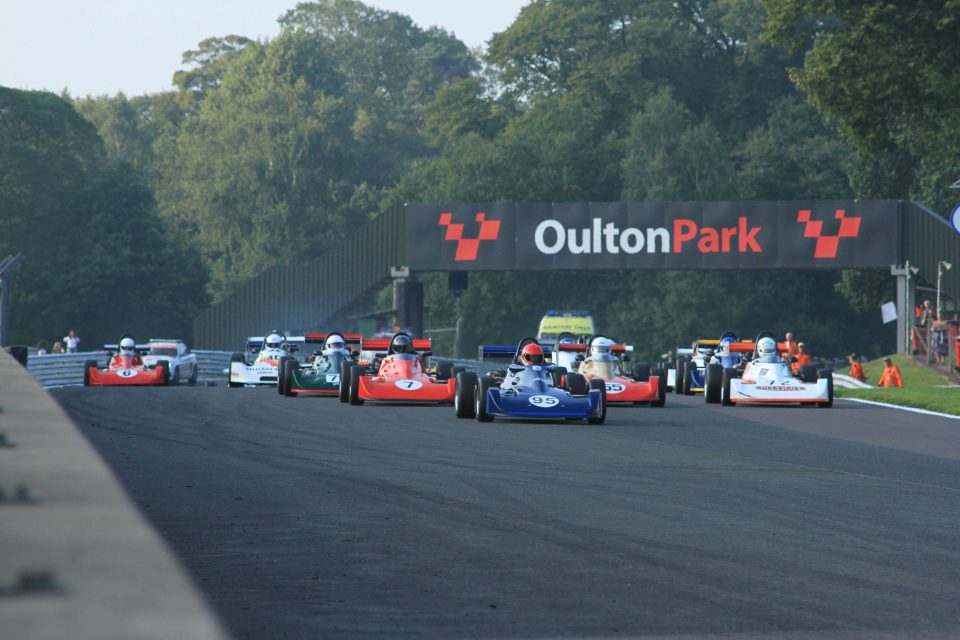 No less than six Morgan Plus 8s will be aiming to get into the action and it is Richard Plant who could head this squadron of Malvern’s finest. From the smaller-engined cars, look out for the Ginetta of Mark Godfrey and the Elan of Jonathan Rose, while Nigel Griffiths brings another AC Cobra to the mix.

The HSCC 70s Road Sports Championship is one of the club’s core championships and has been delivering great value racing for competitors for more than 25 years. The man they have to beat is double champion Jeremy Clark who made his intentions of completing a hat-trick clear by winning the belated season-opener at Brands Hatch in mid-July.

Heading the challengers to Clark is Kevin Kivlochan, who switches to his Morgan Plus 8 for the 70s race, and he will be tough to contain at Oulton Park. Meanwhile, Dave Karaskas, another driver with wide-ranging experience, was a major threat to Clark at Brands Hatch in his TVR 3000M.

The HSCC Guards Trophy is one of the weekend’s longer racer with a 40-munute enduro featuring mandatory pit-stops and optional driver changes. At least seven cars from the Chevron B6 and B8 range are due on the grid and several of them are potential race winners.

Last time out, a mid-race safety car set up a storming finish as father and son Westie and Sam Mitchell scored a memorable debut win in their B8. Elder son Ben is due to share with dad at Oulton but they have plenty of rivals including two of the cars that were hunting them down in the closing stages at Brands Hatch.

The hard-charging Andy Newall now has the B6 that scored many wins over three decades with Michael Schryver, while single-seater and GT ace Michael Lyons again teams up with former BTCC star Anthony Reid in a rare Lenham. John Spiers (TVR Griffiths) and John Davison (Lotus Elan 26R) head the GT pack, while the field is graced by a rare outing for the stunning Lotus 47 of James Claridge. 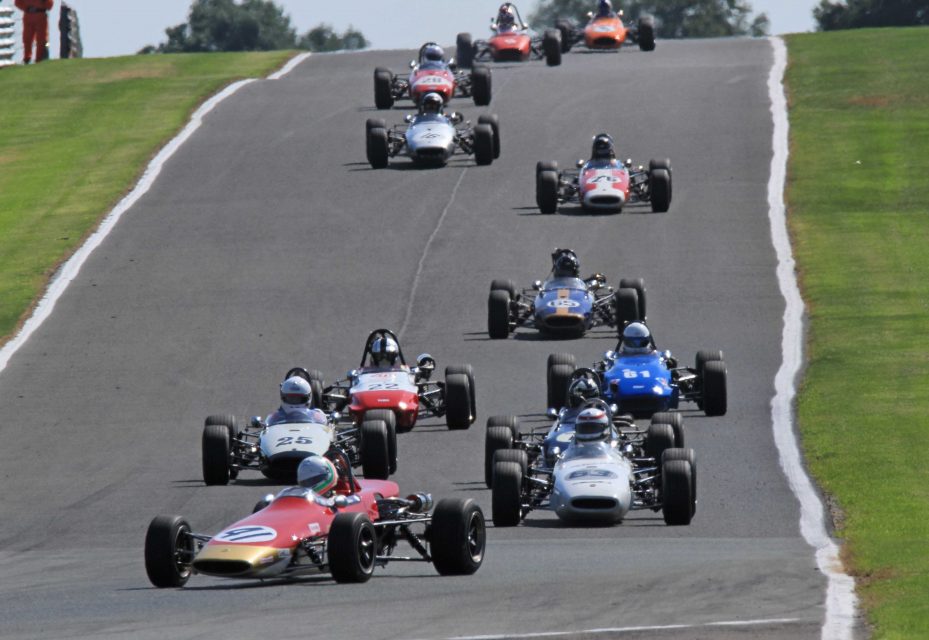 Topping the F3 entry will be Brands winners Andrew Smith (March 783) and young Benn Tilley (March 743). Each took a win at Brands Hatch and Smith had the edge on pace in Kent. Ranged against the Marches will be a gaggle of Ralts, notably the RT3 of former champion Gaius Ghinn and the RT1 of Keith White.

Topping the URS FF2000 pack is another young ace, Ben Stiles in his Van Diemen RF82. Leading the chase of Stiles will be Benn Simms, Anthony Hancock and Andrew Smith, not to be confused with the other Andrew Smith on the grid!

Monday is a busy day for contenders in the HSCC Historic Touring Car Championship with a qualifying session and two races. Peter Hallford flies the stars and stripes in his Mustang but will face a ferocious challenge from a gaggle of potent Lotus Cortinas. Notably, local ace and leading modern GT racer Jon Minshaw joins the fray in a Lotus Cortina and will surely be a major contender. 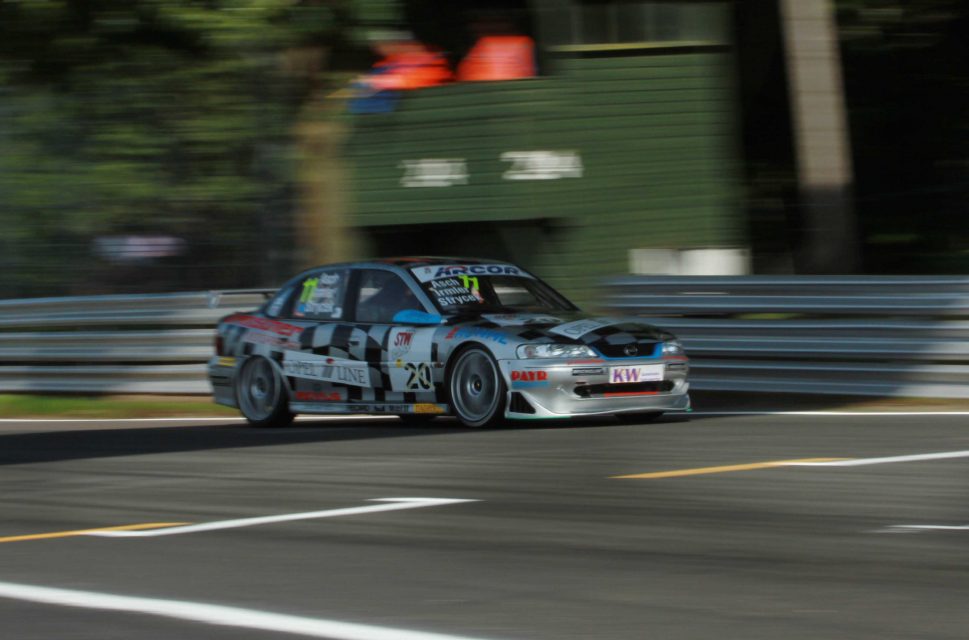 Joining Minshaw in the Cortina pack are Mike Gardiner, Richard Belcher and Roger Stanford and this quartet of cars is sure to give the rumbling Mustang a hard time. Mixing it with the Cortinas should be reigning champion Bob Bullen in one of five Ford Anglias in the field. From the ranks of the smaller-engined cars will come Mini racers Roger Godfrey and Barry Sime, while heading the Imp pack will be the Singer Chamois of Steve Platts.

For sheer spectacle in historic racing, the HSCC Thundersports series takes some beating and the weekend will deliver a wonderfully varied field of sports-racing and GT cars for a pair of races.

Two cars stand out at the head of the entry and both are sensational crowd pleasers from the days of the mighty Can-Am sports-racing cars. Winner of the first race at Brands Hatch was the awesome McLaren M8F of Dean Forward and the 850bhp monster will be tough to beat at Oulton Park. Meanwhile, the driver of Richard Dodkins’ equally huge March 717 is yet to be finally confirmed but a year ago Calum Lockie made it fly.

From the ranks of the 2-litre cars come a gaggle of rapid contenders, topped by the racing return of the famous Chevron B26 ‘chocolate drop’ now in the hands of John Emberson. The B23 of James Claridge and the Osella PA3 of John Spiers are other podium contenders while Mike Fry (Lola T86/90) tops the Sports 2000 division.

Monday’s action includes four Formula Ford races and two of them are for the Classic Formula 1600 Championship. The shortened season kicked off at the Brands Hatch last month and now an excellent grid will gather for rounds three and four at Oulton Park.

Just as he did in Formula Junior, Cam Jackson started his season with a perfect double in his Van Diemen RF80 and he heads to Oulton Park in pursuit of a total of six wins in three different cars.

The Dunlop Historic Trophy for Pre ’66 Jaguars will be a special one-hour race during the Gold Cup weekend, with mandatory pit stops and the option of two drivers.

Inevitably, the faster E-types will set the overall pace at the head of the field and an intriguing contest is in prospect as Jon Minshaw and his son Jack race against each other. They have previously shared E-types in longer racer and Jack has shown tremendous form given his modest experience. Now he will go head-to-head with dad (in two of dad’s cars) as the third generation of racing Minshaw starts to make its mark.

Other leading E-types include those of John Spiers, Martin Melling and Jason (brother of Jon) Minshaw, Jamie Boot and Jonathan Hughes. Away from the E-type ranks, Richard and Tom Butterfield and Glenn Pearson/Peter Dorlin will battle in Mk1 Saloons and Rick Willmott represents the XK models.

For details about spectator admission to the event, please visit www.msv.com

Our Website uses cookies to improve your experience. Please visit our Oulton Cup Gold Cup Preview page for more information about cookies and how we use them.