What is happening with the UK’s Concours events?

The London Concours has been given formal approval to run on 19-20 August by its venue, (the Honourable Artillery Company HQ’s 20,000 sq/m lawn – near to Bank and Moorgate) meaning it’ll be the UK’s first major automotive event to take place since February.

What will change?   There is likely to be a revised hospitality plan, audience capacity and increased venue space as well as separate morning and afternoon tickets.

What is on show?  Feature displays of ‘The Lost Marques’ – a collection of car manufacturers lost to time – ‘The Speed of Sand’, which brings together the Hot Rods that annually gather on Pendine Sands, ‘The Era of the Hypercar’, which collects the latest and most innovative performance cars. 100 automotive icons from the modern day to the early 20th Century,  with displays from specialist automotive dealers and manufacturers.

Tickets available at www.londonconcours.co.uk/tickets. (In the unlikely event of cancellation, ticket buyers will be given a full refund or their ticket can be deferred to 2021.) 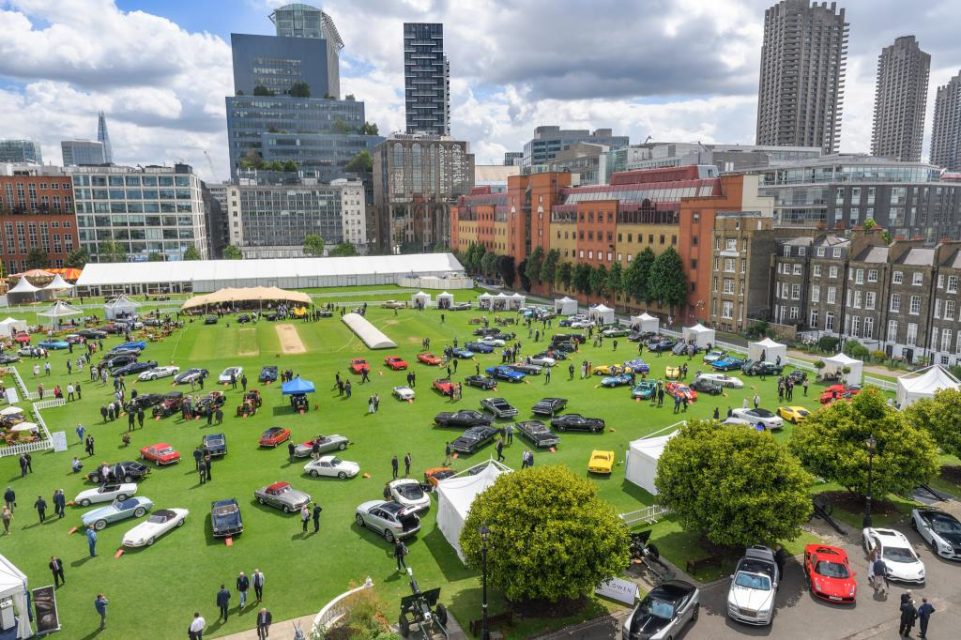 Hampton Court Palace’s – Concours of Elegance is all set to be staged at the usual venue on 4-6 September with social distancing measures in place. For more details and tickets can be purchase here: https://concoursofelegance.co.uk

Salon Prive is also still planning to go ahead with their event on the new date of  23 -26th September from Blenheim Palace. With so few events taking place, manufacturers are struggling for events to launch new models, so this could be beneficial for the event hosted by Andrew Bagley on the lawns of Blenheim Palace. Tickets and full refund guaranteed in the case of a cancellation are back on sale at : https://www.salonpriveconcours.com

Auto Royale – the new multi class Concours which was set to be staged for an inaugural event this summer in the grounds of Althorpe has been postponed until 2021. A new date has yet to be set.

In light of the thousands of classic and supercars, which this year would have been appearing at concours events around the globe but are instead languishing in garages, they now have the chance of taking part in an online concours that could raise thousands of pounds for Unicef.

Hothouse Media are launching a Concours Virtual to be run across social media and the website www.concoursvirtual.com to give owners the chance of taking part in a global event and to allow enthusiasts around the world to see some of the best cars ever made. The cars will be judged by a group of motoring experts and celebrities.

The online concours, which starts on June 30 and runs until August 9, has already attracted dozens of vehicles and a unique group of expert judges, from Wayne Carini, the TV star of the Discovery Channel’s ‘Chasing Classic Cars’, to classic car collector and Pink Floyd drummer Nick Mason, and Goodwood Festival of Speed and Revival founder, the Duke of Richmond.

How does it work?  The concours has 17 classes, ranging from Cars of the Art Deco period to Concept Cars of the 1970s, and 70 years of Formula 1. There will also be a special tribute class to the late Sir Stirling Moss. The classes will be judged by more than 40 judges from the world of classic and supercars, who will ultimately choose the Best in Show.  Collectors who are interested in submitting their car for the Concours should visit the website www.concoursvirtual.com and register their interest all entrants will be asked to donate to Unicef.

The general public will also be able to vote for their favourite concours cars in each class as well as for their overall favourite for the People’s Choice Award. Closing date for entries is June 15.

Our Website uses cookies to improve your experience. Please visit our What is happening with the UK’s Concours events? page for more information about cookies and how we use them.