Britain returns to racing with the Masters Festival at Donington

A cold but sunny Donington Park saw Britain’s return to racing in an Easter weekend treated to no less than seven Masters races, but to make up for the absent spectators Masters Live Streamed all 5 hours of Saturday’s racing action, so you are able to catch up right here if you missed it!

In Masters Historic Formula One, Steve Hartley took two strong pole positions in his McLaren MP4/1 but come the races, Mike Cantillon had the upper hand twice in his Williams FW07C. Especially in Saturday’s race, Hartley and Cantillon kept viewers – and each other – on their toes from start to finish in what was an enthralling fight for the win. Behind them, Steve Brooks in the Lotus 91, Warren Briggs in the McLaren M29, Mark Hazell in the Williams FW08 and Lukas Halusa in the McLaren M23 all played their part in two stunning races.

The Masters Endurance Legends also qualified and raced twice, with Max Lynn posting a brilliant sub-1-minute time in Saturday’s qualifying but the wins went the way of Lynn Jr’s BR01 teammate Jack Dex and Steve Tandy in the Lola B12/60. The Lynn family backed up Dex for a BR01 1-2-3 on Friday but Tandy bravely kept all three Russian cars behind in a tense finale on Saturday.

The Masters Historic Sports Cars staged the opening race on Friday, with Tom Bradshaw running home a dominant winner in his Chevron B19. Jonathan Mitchell (Chevron B19) and Chris Beighton (Lola T70 Mk3B) had a race-long scrap for the remaining steps on the podium, while the efforts of Alex Brundle in Gary Pearson’s Lola T70 Mk3B were a case of what-could-have-been, the Lola an early casualty with a broken gear linkage. See Full HSCC report and race footage here 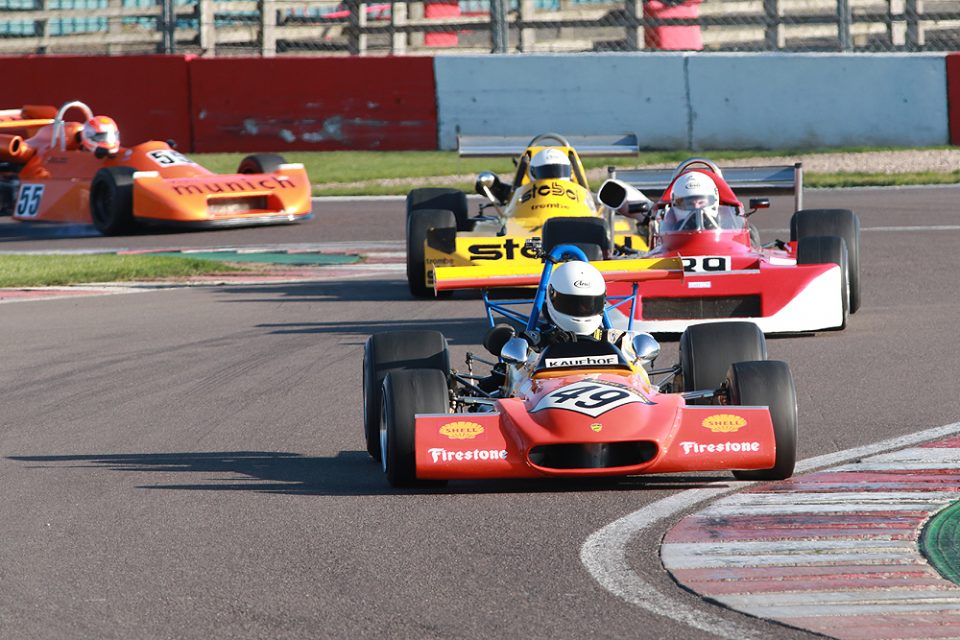 The Masters Gentlemen Drivers, meanwhile, caused a Friday night fever of the right kind, as Gary and John Pearson won an exciting five-way battle for victory. Initially running fourth to pole-sitter Mike Whitaker, the James Cottingham/Joe Twyman Cobra and the second Pearsons Engineering E-type shared by Alex Brundle and Gary Pearson, their E-type in the hands of John Pearson successfully defended an ever decreasing margin to Whitaker’s TVR Griffith.

And then Saturday produced a corker of a Masters Pre-66 Touring Car race, as Marcus Jewell and Ben Clucas very much held their own against a five-strong Ford Mustang challenge. There was heartbreak for Alex Taylor as his Mustang ran out of fuel, leaving Craig Davies to offer the strongest Mustang challenge to the winning Lotus Cortina. Steve Soper was the early leader in the pole-sitting Mustang shared with Henry Mann but a long pitstop and a subsequent penalty put the Alan Mann Racing Mustang out of contention.

Next up on the Master’s Calendar is their first race weekend in the US, as the Weather Raceway at Laguna Seca will host the Masters Speed Festival on May 15-16. Then it is back to the UK for our traditional late-May date with the Masters Historic Festival at Brands so two proper spring meetings on both sides of the Atlantic coming up!

Our Website uses cookies to improve your experience. Please visit our Britain returns to racing with the Masters Festival at Donington page for more information about cookies and how we use them.