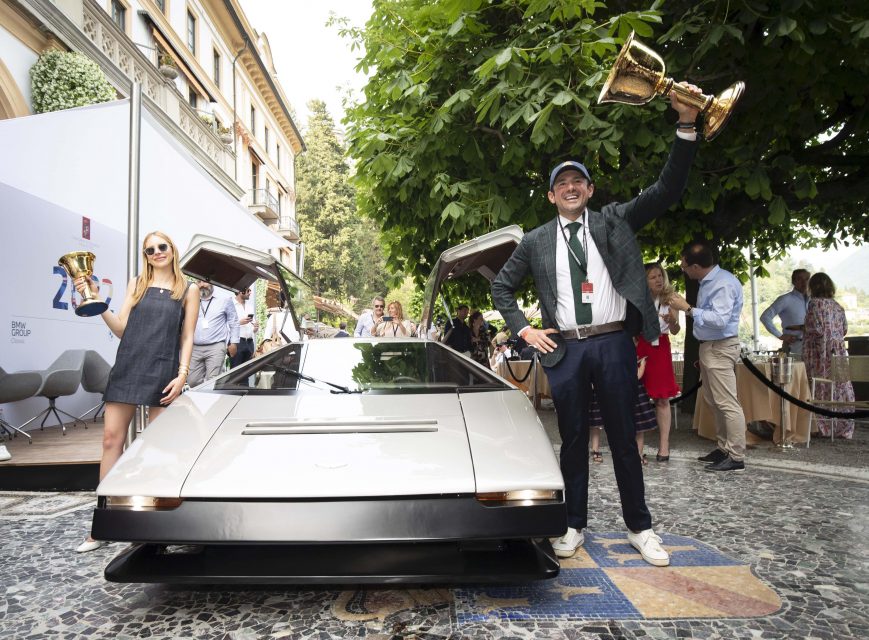 The Aston Martin Bulldog restored in the UK By Classic Motor cars in Bridgnorth, Shropshire, has become the youngest car ever to win the prestigious Coppa d’Oro award at the Concorso D’Eleganza at Ville D’ Este on the shore of lake Como. The Trophy is one of two top awards and is voted for by other entrants to the Concours.

More than more than 6,000 hours went into the restoration of the famous Aston martin Concept car which when it was unveiled by Aston Marin in 1980 quickly became the stuff of legend for car fans around the world. Only one car was ever built, and its futuristic design and v 8 engine took it to 192 miles per hour but not the 200 mph that Aston martin had planned.

In 1981, Aston Martin found itself in hard times and was forced to sell the car to a buyer in the middle East and the car disappeared from view

Two years ago, the car was found and purchased by car collector Philip Sarofim who asked Richard Gauntlett the son of the former owner of Aston Martin to manage the restoration of the car with the aim of reaching the 200 mph it never did when it was built.

Phillip Sarofim said: “The win at Ville D’Este is a momentous occasion – to win such a prestigious and historic award on its first concours is a testament to CMCs incredible work and the wild vision of and engineering skill of Aston Martin. The next challenge is to get the car to 200 mph, and we will do that later this year at a location which we will announce shortly.”

Tim Griffin the managing Director of Classic Motor Cars in Bridgnorth said “The Italian award is a tribute to the team at CMC who will be over the moon about the win.”

Our Website uses cookies to improve your experience. Please visit our Aston Matin Bulldog wins Coppa d’Oro award at Ville D’Este page for more information about cookies and how we use them.