A song for Porsche lovers at the Nordschleife!

A song for the Ring Meisters – The world of Motorsport is well and truly opening after the ravages of the global pandemic. Olaf Manthey has become a race marshal, Misha Charoudin’s long dormant alter ego Boosted Boris has returned from obscurity as a shamanic warrior guide, and Walter Röhrl waits in the snowy mountains to train ‘The Chosen One’ to be a better driver. All of this can only mean one thing – the public days or ‘TF’ Season at the Ring has started.

What is the TF Song?
The TF Song is rock track and a satire on boy racers and overeager young visitors to the Ring, or any race track. Beginners in motorsport can feel fear. This fear turns to adrenaline, and gives rise to bravado, and sadly often results in sticky consequences. The message is clear: Respect the Ring.

The Pineapple King is apparenty a reference to the German phrase ‘Goldene Ananas’ or Golden Pineapple, perhaps the equivalent of the ‘wooden spoon’ in English. It’s a non-existent prize for, has come to be associated with people who treat public ring sessions as a race. You can’t win a prize on public days, except perhaps the metaphorical and far from desirable Pineapple.

What is going on in the video?
The video tells the story of a young would-be Ring warrior who comes to the track with the wrong idea of winning. He is spotted by YouTuber Misha Charoudin’s alter ego Boosted Boris who decides he is in fact ‘The Chosen One’. Then, with the help of Röhrl and Manthey, he finds himself retrained, renewed and ready to return to the Ring for a victory of a very different kind. There are also cameo appearances from the first British Nürburgring journalist Dale Lomas, and even former Lamborghini works driver and FIA GT1 World Championships race winner Stefan Rosina. 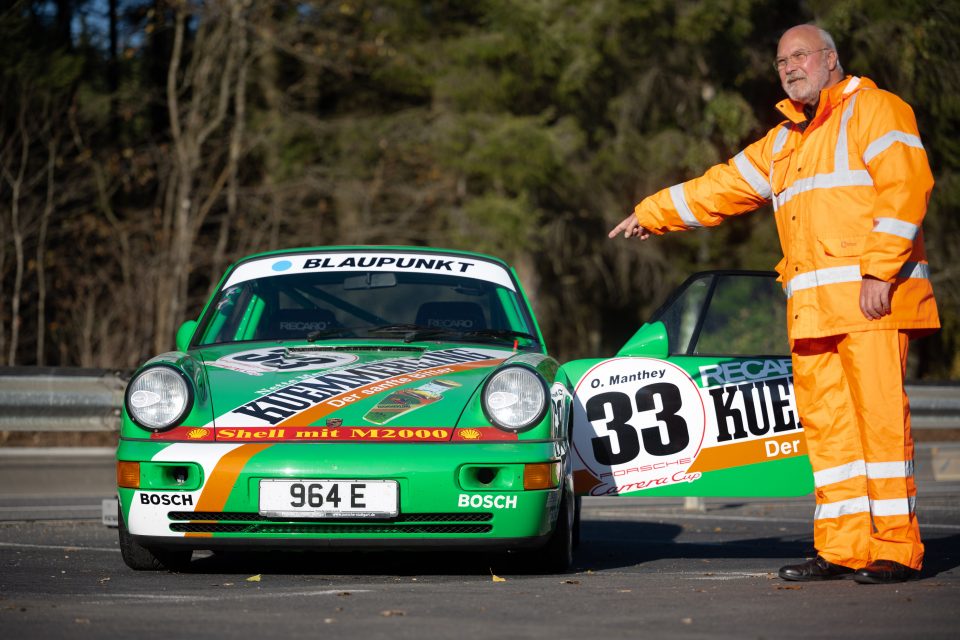 Feature Cars
Many cool cars appear in the video, including German legends of VLN and motorsport. Nürburgring Regular the Foxtail Manta features, as does ‘Kermit’, the recently rediscovered and restored race Porsche 964 in which Herr Manthey won his very first Porsche Supercup title.

All for a good cause: The Heizer Monkeys have been active in trying to help the community since the devastating floods faced by the region around the Ring. Joey volunteered in the aftermath and ended up giving dozens of short concerts to emergency workers and volunteers who had returned coming out of the disaster zone. The band also recorded and released the song ‘You Ahr Not Alone’ to raise money for the victims.

TF Song T-Shirts and other merchandise will be available through the website heizermonkeys.com in the coming days and proceeds go directly to the EifelKind Charity, made up of VLN racers who have been collecting donations in the paddock for disabled children in the region for more than a decade. EiFelkind has been at the forefront of disaster relief fundraising and is now fundraising on behalf of the motorsport community for Ukrainian refugees.

Our Website uses cookies to improve your experience. Please visit our A song for Porsche lovers at the Nordschleife! page for more information about cookies and how we use them.