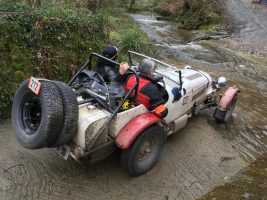 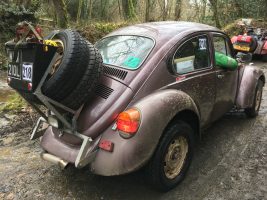 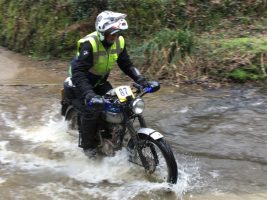 We spent our Easter Saturday on Crackington hill being splattered with some very muddy mud but to the delight of the children, watching some of the competitors on the 96th London to Lands End Trial.

A huge entry of over 95 Motorcycles and 126 cars entered the event with many of the motorcycles retiring along the way due to snow and sleet raining down overnight up in the hills. (Who would blame them) 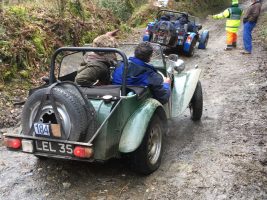 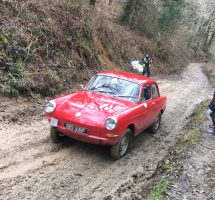 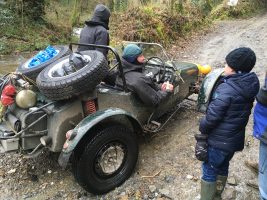 But in the end I was delighted to see it the Triumph T100 of Patrick Lloyd Jacob who won the Motorcycle Class A, Kathryn Martin picked up Class B on a Yamaha CRF and Andrew Craddock won Class C on his Yamaha TTR.

Amongst the four wheeled vehicles it was the Hillman Avenger of Lester and Dan Keat who came out on top,  other class winners included the VW Beetle of Craig and Nigel Allen and the MG J2 of Bill and Liz Bennett plus a Ford Popular, MG Midget and an VW Notchback.  Not what you would expect when you see the video!

If you were on the event – we would be delighted to hear how your trail went!  Get in touch.  sarah@autoaddicts.co.uk

It was in 1904 the Motorcycle Club (already 7 yrs old) instigated the London Edinburgh Trial establishing itself as a premier promotor of long distance reliability trials.  In 1908 the then new Chairman Charles Jarrott came up with the idea of the London to Lands End Trial. Open only to motorcycles in the early years. Later cars were admitted and as roads improved so did the machinery, the route became progressively harder with more riding in the hills. In the late 20s and 30s entry rose to over 500 vehicles. Today the trail still attracts a huge entry and spectators enjoying two or three hours of entertainment over the Easter break.

You can find the full results here

Our Website uses cookies to improve your experience. Please visit our London to Land’s End Trial 2018 page for more information about cookies and how we use them.