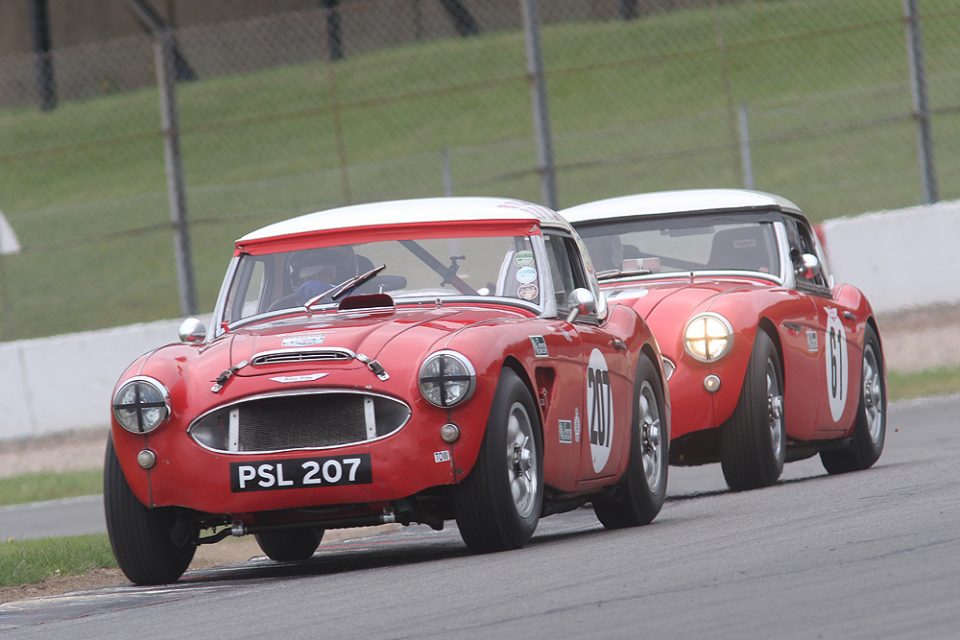 The Historic Sports Car Club race meeting at Donington Park over the weekend (26/27 June) delivered on every front, with fantastic racing from bumper grids being enjoyed by a healthy crowd of spectators.

On one of Britain’s favourite tracks, the Formula Ford and Formula 3 action stood out and it was Historic Formula Ford 2000 that produced some epic race action from a vast entry of cars. In Formula Ford 1600, the fact that Cam Jackson won twice on Saturday in both Classic and Historic Formula Ford, was not a surprise but in both races he had to work incredibly hard as Jordan Harrison ran him close in the Classic race and Tom McArthur ran him even closer in Historics. 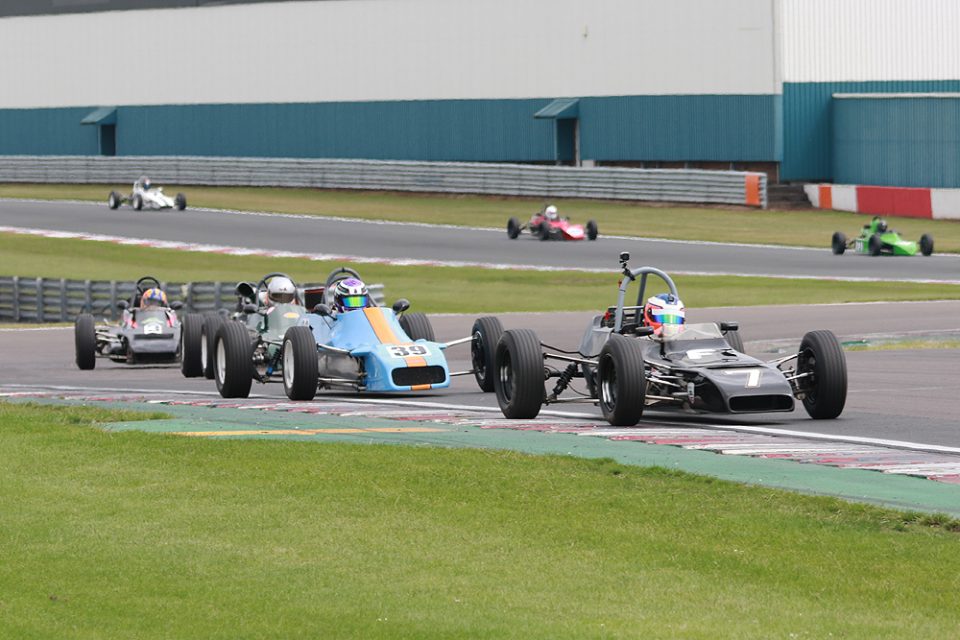 The Classic Formula Ford opener started with a mighty five-car train as Jackson and Jordan Harrison were chased by Henry Chart, Samuel Harrison and Rick Morris, but Morris was struggling for pace and dropped off the tail of the park as Jackson and Jordan Harrison went clear. Meanwhile, Chart and Samuel Harrison battled mightily over third in a contest that often went side-by-side and ran all the way to the flag. 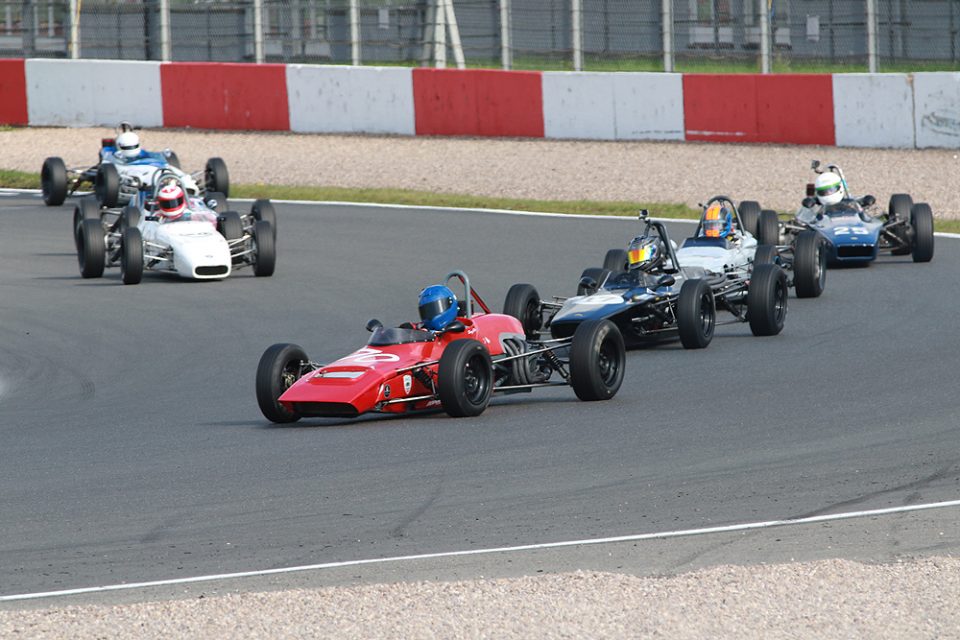 A broken gear linkage cost Jackson the chance of another victory in the second Classic race on Sunday, as Jordan Harrison worked into the lead at the expense of Chart as Samuel Harrison was side-lined with gearbox woes. 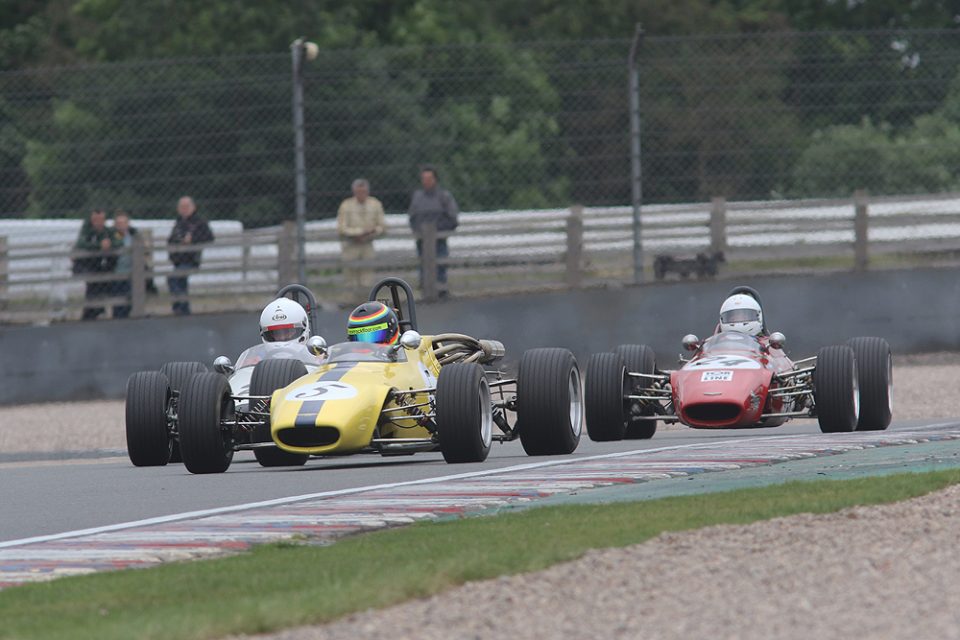 Saturday’s Historic Formula Ford opener featured a dramatic last lap after a race-long lead contest. On the final tour, Jackson’s Winkelmann jumped out of gear over the kerbs at McLean’s and McArthur could not avoid contact which sent his Titan up and over the back of the Winkelmann. Somehow, both cars continued although the Winkelmann had damage to the carburettor. Down into the chicane, McArthur challenged again but spun, which dropped him to fifth behind Callum Grant, Horatio Fitz-Simon and Matt Wrigley. 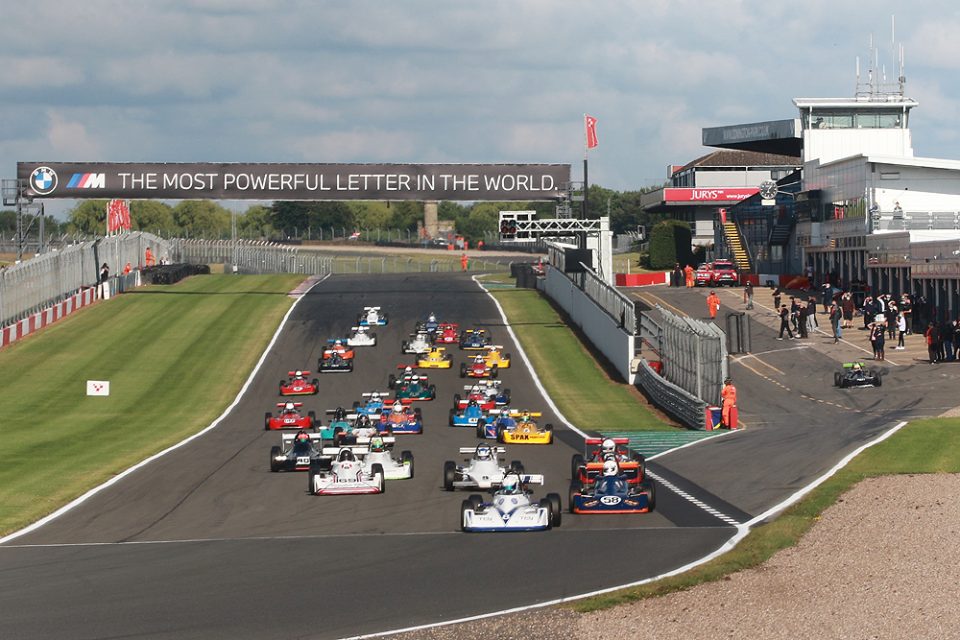 On Sunday, there was another fabulous lead contest as Jackson, McArthur and Fitz-Simon went wheel-to-wheel. McArthur did well to fight back after a moment with a backmarker and was able to slipstream ahead on the final lap for a well-deserved victory at Jackson’s expense. 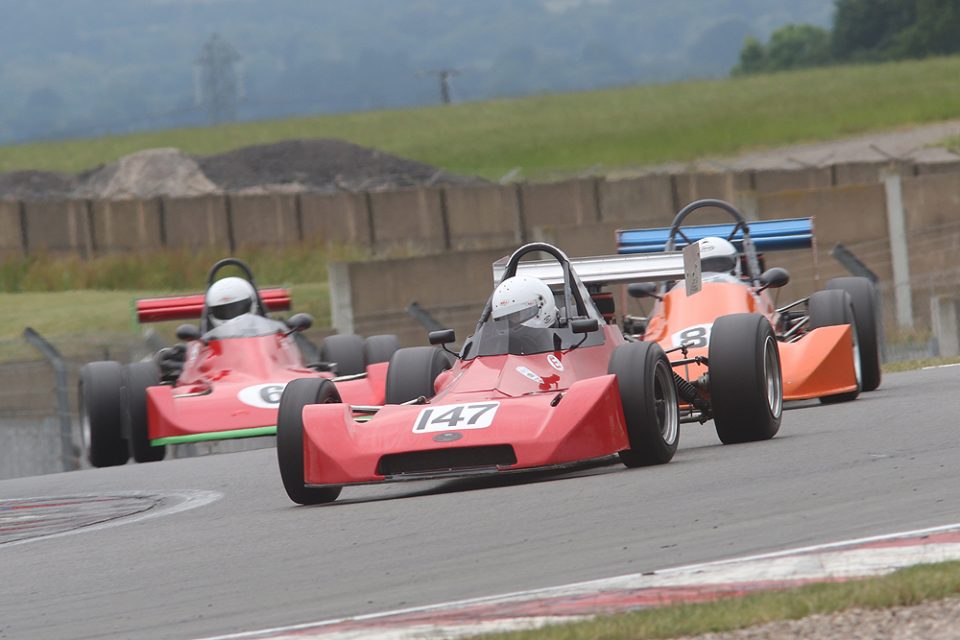 It was a big weekend for Historic Formula Ford 2000 with two qualifying races needed to sort out a capacity 32-car grid for the final each day. Young Ben Glasswell starred in the first qualifier to bounce back from an early delay and win convincingly from Ian Foley while young Molly Dodd impressed enormously by finishing fourth behind Brian Morris. 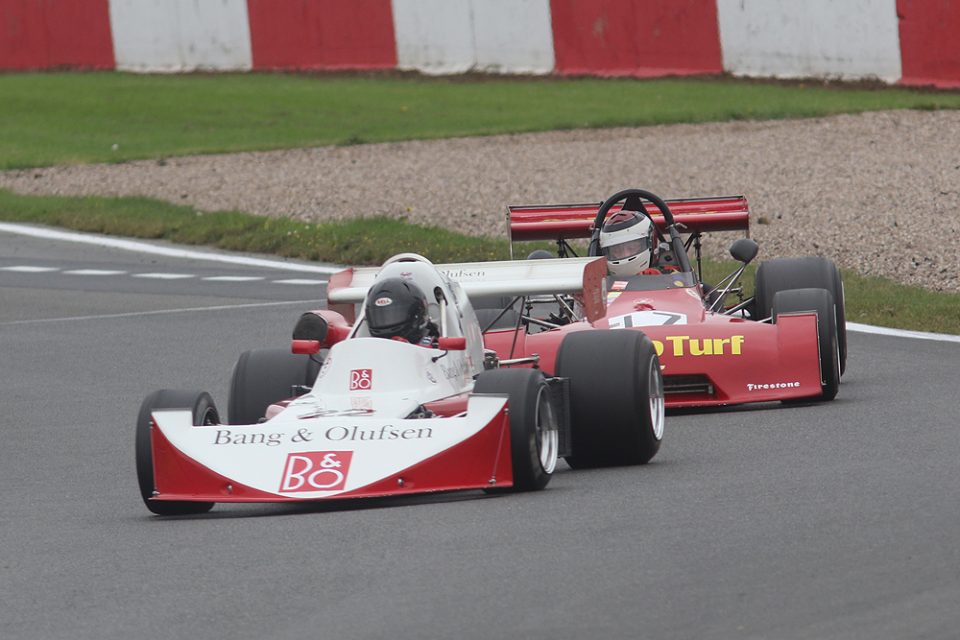 The Saturday final, which was halted by a first-lap red flag after a four-car tangle at Redgate, fell to Graham Fennymore, despite a dogged pursuit by Ian Pearson with former multiple champion Andrew Park back in third and struggling to match the pace with some brake issues. into an excellent fourth came Benn Tilley on his category debut in the Delta T80 of Simon Ayliff. 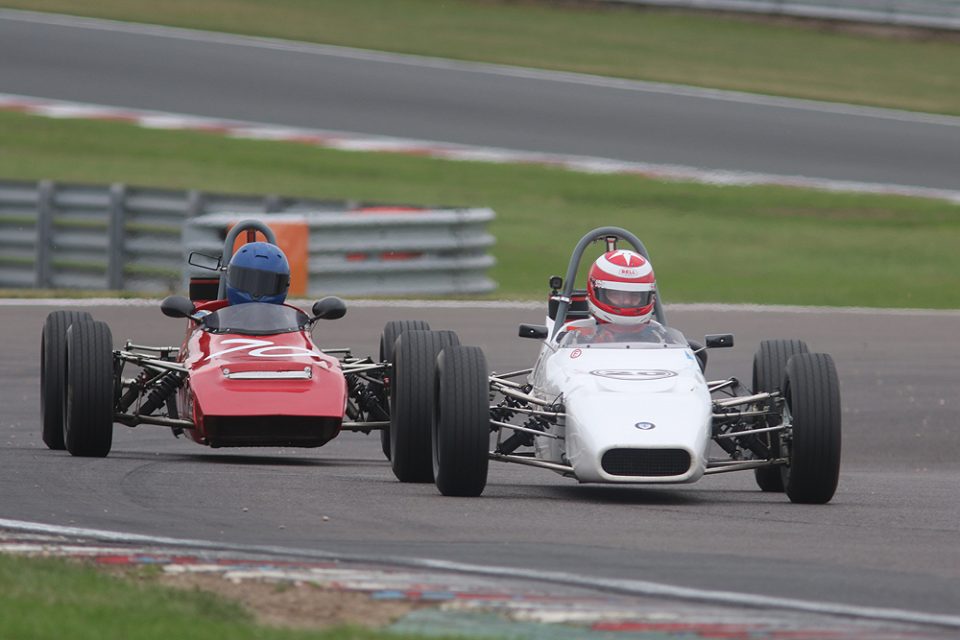 One of the best races on the weekend was Sunday’s Historic FF2000 final when Fennymore repeated his Saturday but only after intense pressure from both Pearson and Park. 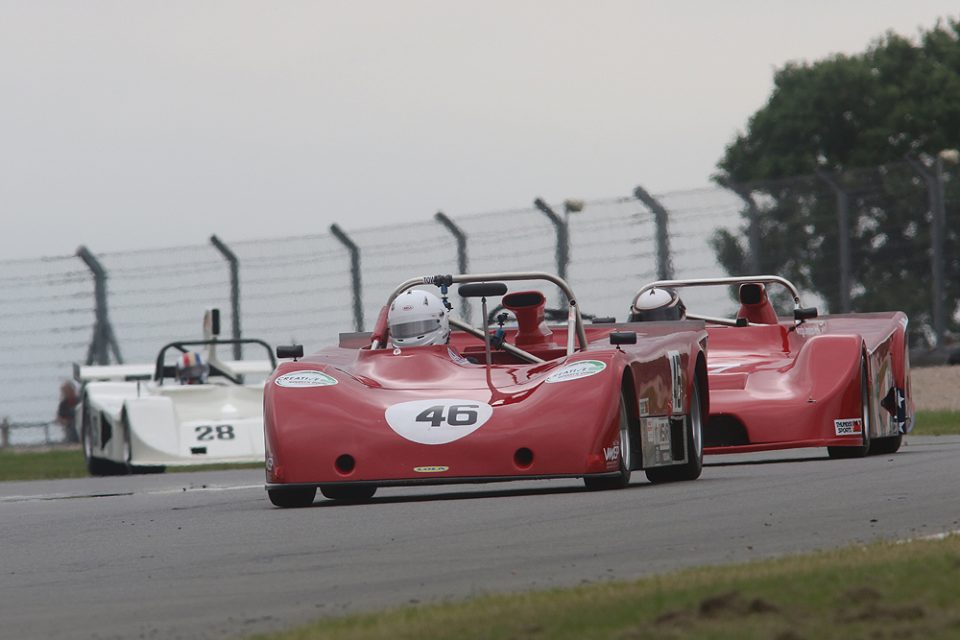 Earlier, the second heat had fallen to Adrian Reynard after a tussle with Graham Ridgeway and it was Fennymore who set the pace in the final despite some fierce opposition. With his Royale working more to his liking, Pearson was even closer while Park was attacking for the lead when he ran wide and lost time on the grass. That allowed Tilley up to third as Park recovered before Glasswell arrived in fifth.

Dean Forward ultimately had a relatively straightforward run to a double victory in the pair of Thundersports race in his mighty McLaren M8F after Calum Lockie’s March 717 was side-lined in both races. On Saturday, the March led to the end of the opening lap before a broken input shaft sent Lockie cruising to the pits.

On Sunday, Forward lead from the front as Lockie started the March from the back of the grid and charged through to second before the front bodywork detached itself on the pit straight and forced him to retire. 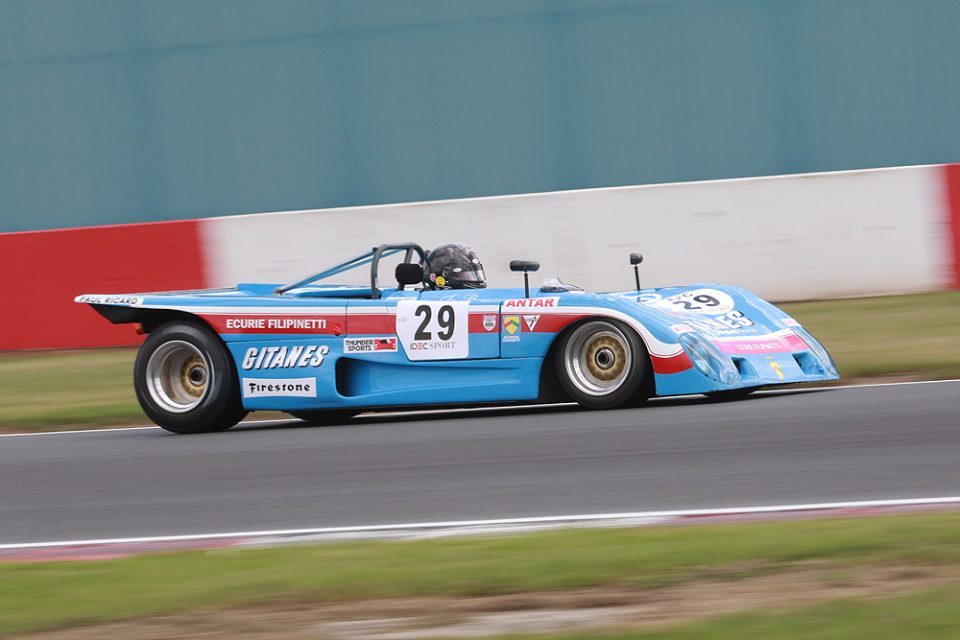 Best of the 2-litre cars on Saturday was John Burton (Chevron B26) from Mark Richardson (Lola T290) while Trevor Welsh (Lola T492) raced hard to top the Sports 2000s. With Burton not starting Sunday’s race, Richardson led the chase of Forward once Lockie retired after 12 laps, with John Spiers (Osella) rounding out the podium. A fabulous Sports 2000 battle went all the way to the flag as Welsh drove like a demon to fend off Will Schryver and Tim Jacobsen after many place changes. At the end of half an hour of racing, a third of a second covered the battling trio. 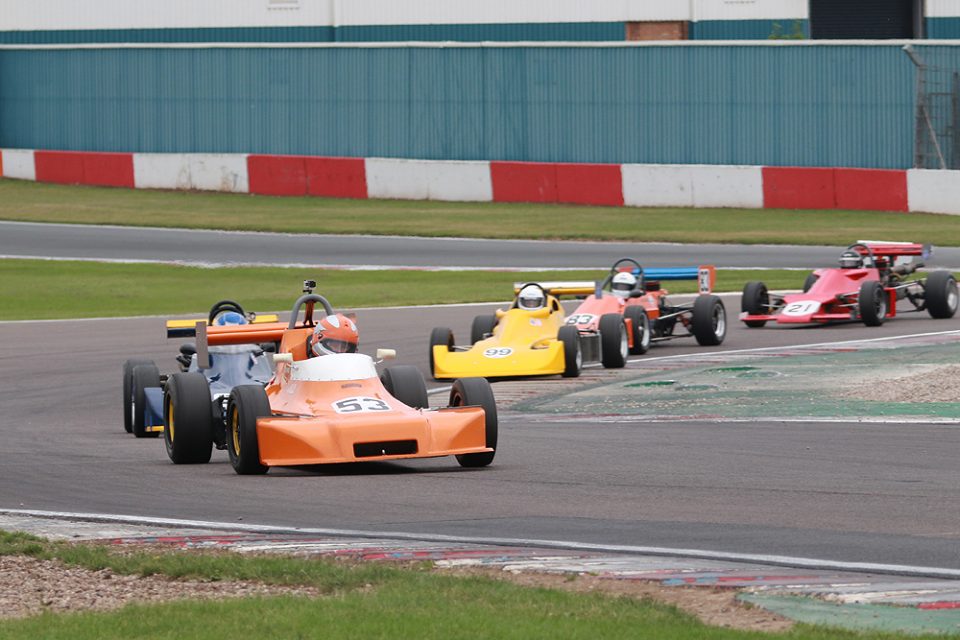 Cam Jackson was on target to add a third win in the Guards Trophy until the Lenham P70 he was sharing with his brother Dominik retired mid-race when third gear exploded and left Andy Newall with a clear lead in his Chevron B6.  Newall drove flat out all the way to the flag to ensure another victory from the B8 of Mark Colman. 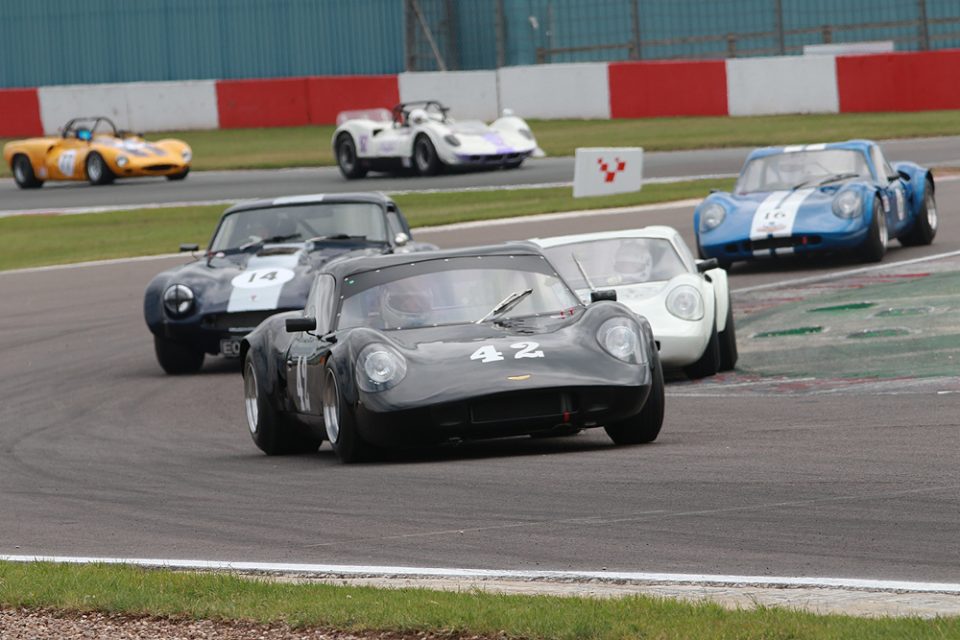 Into third came father and son Westie and Sam Mitchell, who edged ahead of the Elva Mk7S of Nick Pancisi and Andy McMillan. In the GT contest John Spiers (TVR Griffith) was a clear winner over a fabulous battle of the Lotus Elans, which finally went to Andrew Haddon, but only after John Davison got delayed by a backmarker. Then, on the final lap, the Haddon car cut out and coasted over the line as Davison closed right in. 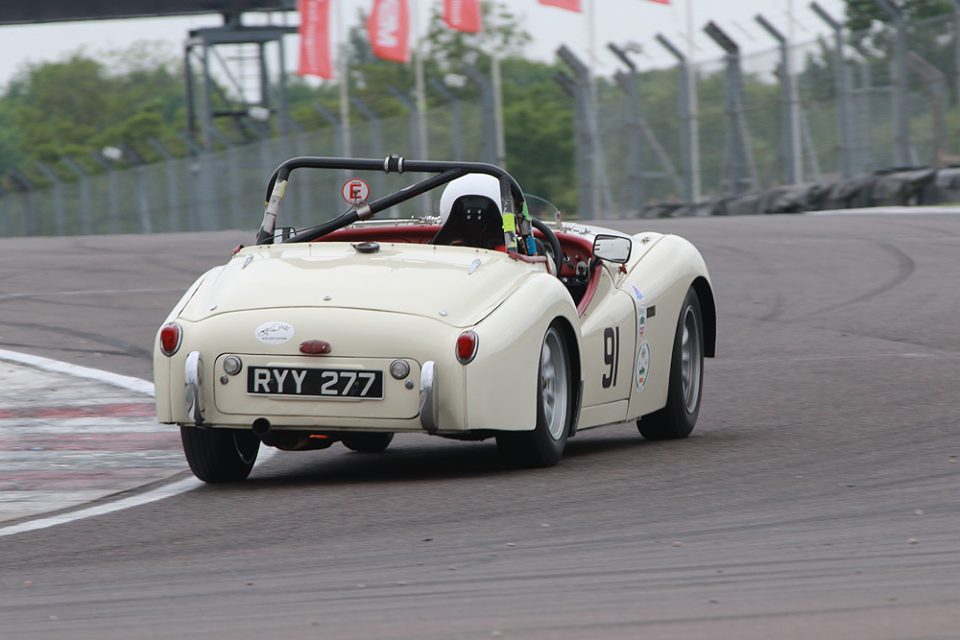 Michael Lyons blitzed the Aurora Trophy field in his F5000 Lola T400 despite the best efforts of Martin Stretton (Formula 2 March 712) in Saturday’s first race. Lyons doubled up on Sunday as Paul Campfield (Chevron B24) pipped the flying Martyn Donn (Chevron B27) by half a second for the runner-up slot. 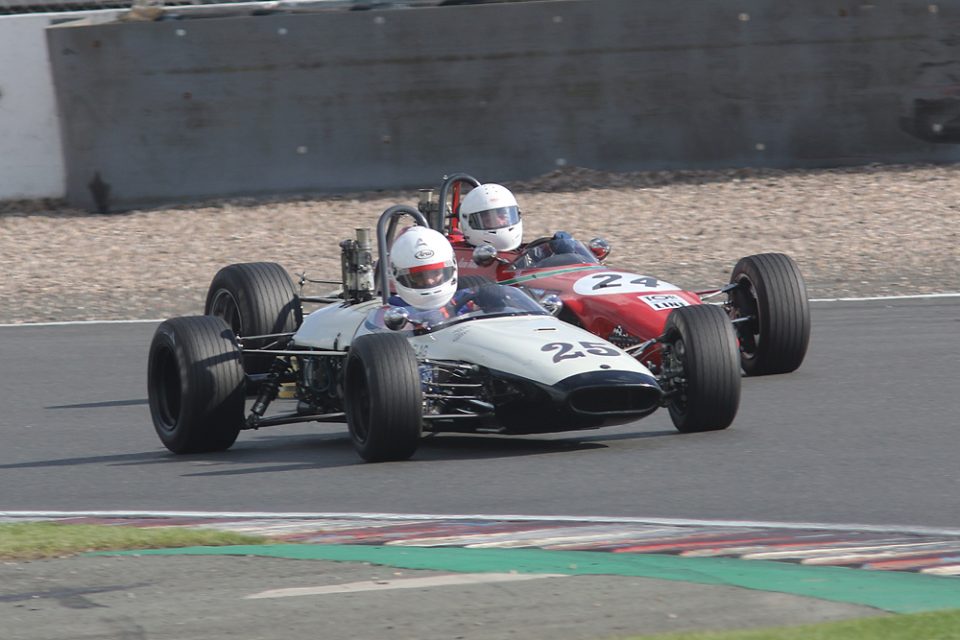 Two tremendous Historic Formula 3 races featured mighty three-way battles for much of the race as the leaders ran three abreast on the pits straight in a battle that featured fierce competition but excellent driving standards. However, in a frustrating weekend, Benn Simms retired his Chevron with a worsening misfire on Saturday. Instead, Andrew Hibberd, in his first run in his Brabham BT18 for nearly two years, just edged clear of Jeremy Timms after a fine battle although the gap was greater at the flag after Timms had a last corner spin. The second race was just as good as the first one, although Simms had to retire with further engine maladies leaving Hibberd to fend off Timms by a second. 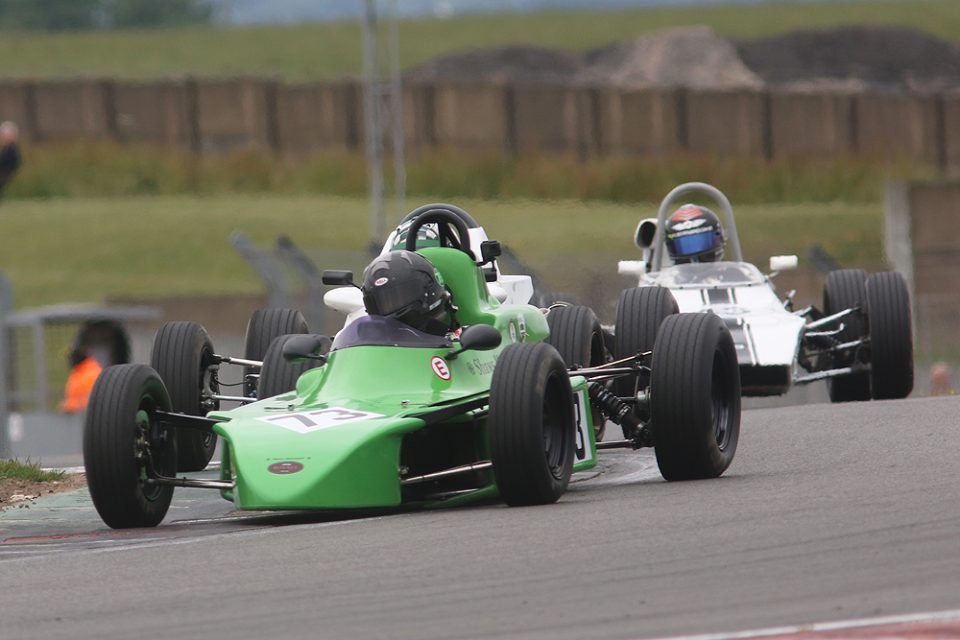 The Historic Road Sports produced victory for John Davison as the two Elans of Davison and Paul Tooms battled with Kevin Kivlochan’s AC Cobra. Kivlochan spent much of the race recovering from an early moment and just caught Tooms on the drag to the line to take second by a fifth of a second. 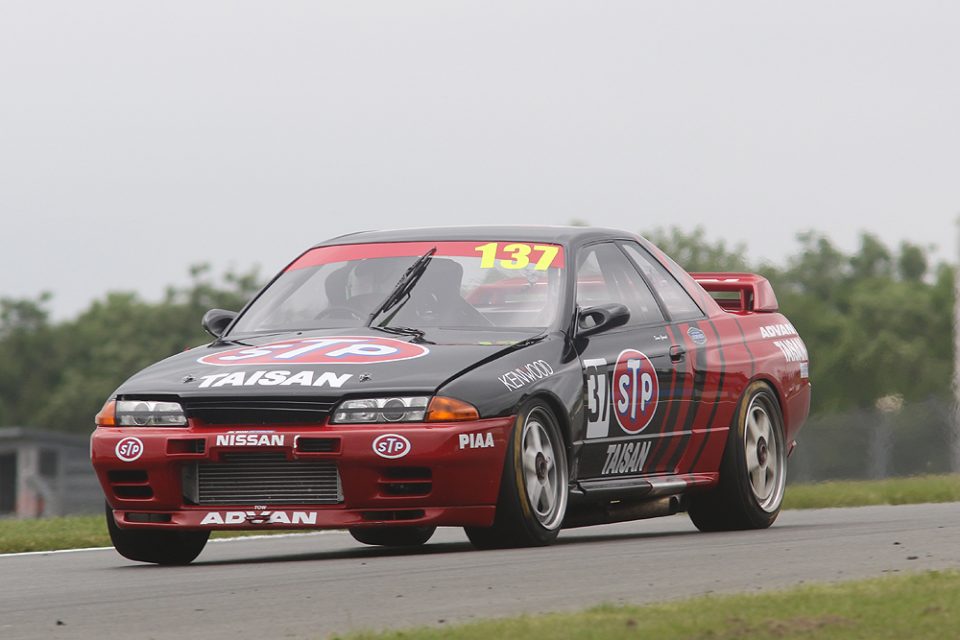 In the Historic Touring Cars, Dan Williamson (Ford Falcon) maintained his excellent form to win twice as battles raged all down the field. In the opening race, Marcus Jewell and Mark Martin headed the Lotus Cortina pack while later on Martin turned the tables by a fraction of a second after a fabulous battle. 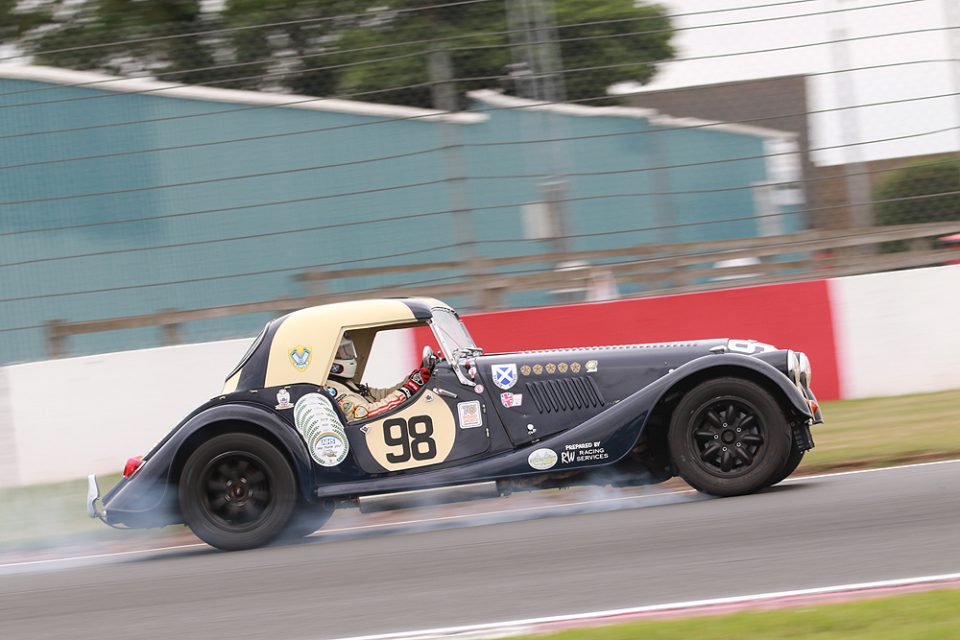 The 70s Road Sports race had to be restarted after an oil/water/coolant slick was laid around most of the circuit and left three cars in the gravel at various locations. However, at the restart, the order was the same as Will Plant headed his father Richard in a Morgan one-two, while Jim Dean forged his Lotus Europa into third ahead of Kevin Kivlochan’s Morgan. Meanwhile, a fine grid for the guesting GT and Sports Car Cup race was headed by the Lotus Elan of Andrew Haddon and Andy Wolfe, which was able to gradually out-pace the AC Cobra of Simon Garrad/Chris Chiles junior.

Our Website uses cookies to improve your experience. Please visit our Superb Donington weekend for HSCC page for more information about cookies and how we use them.