One of the highlight events of the Historic Sports Car Club’s season is the annual Legends of Brands Hatch Super Prix over the weekend of Friday to Sunday 9/10/11 July. 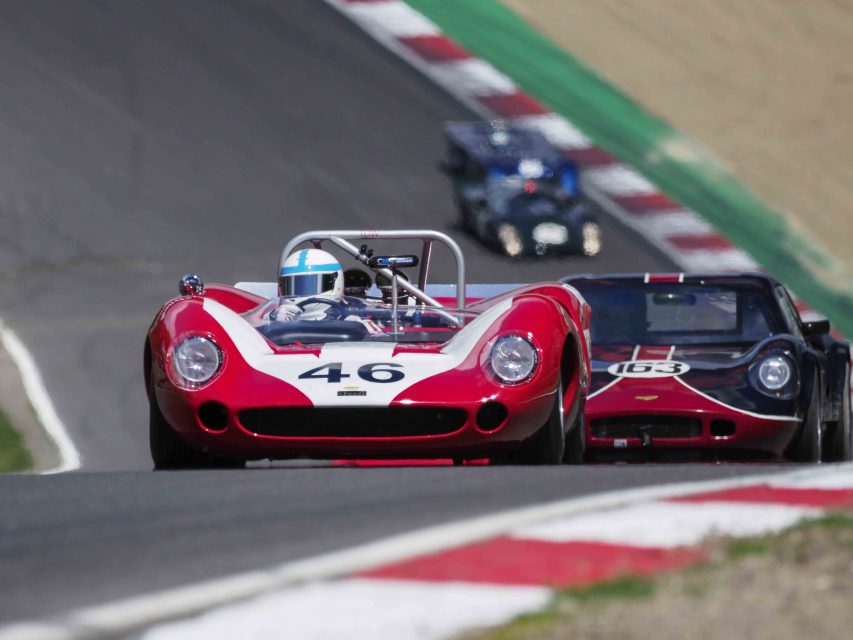 A fantastic entry of 400 cars will gather at the famous Kent track for three days of action, starting on the Indy circuit on Friday and then moving to the fabulous Grand Prix circuit for Saturday and Sunday. It is a real highlight of the season for many races as they get the chance to tackle the famous GP circuit.

There are bumper grids across many of the races including a capacity field of Formula Juniors for a race on Saturday. Both front and rear-engined cars will line up together in an entry that includes the very rapid Chris Goodwin, Clive Richards and Michael Hibberd, all in Lotus 22s. The Brabhams of Mark Shaw and Richard Wilson will also be amongst the faster rear-engined cars.

In the front-engined section, a gaggle of potential front runners include Stuart Roach in his Alexis Mk2 and the Lola of Justin Fleming. It’s a fine and varied field and should deliver some great races all down the order.

Another bumper entry is for the third race of the season for the Guards Trophy which has a 40-minute race on Sunday for a capacity field of GT and sports-racing cars of the 60s. At Donington last time out the Lenham P70 of the Jackson family was heading for victory before a gearbox failure struck. This weekend car owner Simon shares with his son Cam, one of the leading historic races of the era, and they will be tough to beat.

The other Lenham of father and son Robert and Ben Tusting should also be in contention while a gaggle of Chevrons is headed by Donington winner Andy Newall (B6). Charles Allison, James Schryver, Hugh Colman and father and son Westie and Ben Mitchell are other leading Chevron racers.

Among the GT field, setting the pace should be the TVR Griffith of John Spiers as well as the pair of Shelby Daytona Cobra Coupes of Michael Cullen and Mark Martin. However, a raft of rapid Lotus Elans will give the more powerful cars a tough time, notably John Davison in his former championship winning 26R.

Historic Formula Ford 2000 plays a significant part in the weekend, with two heats and a final on Friday and a further championship race on Saturday. Topping the entry is multiple champion Andrew Park and double Donington winner Graham Fennymore, who will re-join the fabulous battle they had last time out, along with Ian Pearson, who had his Royale RP30 right up with the pacesetting Reynards.

The Historic Road Sports Championship is another series having a bumper season and has a 25-minute race to bring the curtain down on Sunday. The Morgan +8s and Lotus Elans usually set the pace along with Kevin Kivlochan’s AC Cobra. Phillip St Clair Tisdall and John Shaw feature in the Morgan pack, while John Davidson heads the Elan contingent with support from Jonathan Rose and Fraser Gibney.

Running in a single race on Saturday is the Thundersports series, with a wonderful grid of sports racing and GT cars from the 1970s and early 80s. The entry is currently headed by the 2-litre prototypes of John Spiers, Simon Watts, Mark Richardson, Julian Maynard and James Claridge as Osella, Chevron and Lola battle just as they did in period. Among the closed cockpit cars, John Sheldon (Chevron B16) is a key contender, while Neil Merry fields his Chevrolet Corvette in the GT class.

A fine field of Historic Formula Ford 1600s will race on both Saturday and Sunday in two rounds of the championship. It’s been a remarkable season for Cam Jackson so far, and he has a handy points’ advantage. But Donington proved that he can be toppled when Tom MacArthur drove a mighty race to finally come between the Winkelmann and another victory.

Though MacArthur is not entered for Brands, other drivers will take up the battle, including Matthew Wrigley, Will Nuthall and, notably, Horatio Fitz-Simon, who was right in the lead battle at Donington. A huge contingent of over 50s drivers will contest their own division, with drivers like Brian Morris, Ross, Drybrough and Tim Brise to the fore.

Another strong grid of Formula Fords will contest two rounds of the Classic Formula Ford 1600 championship, although current pace setter Cam Jackson may not be among them. However, Jordan Harrison in his Lola T540E showed the pace to beat Jackson at Donington and he will head the entry along with veteran Formula Ford racer Rick Morris, young karter Joseph Ahrens and Stuart Kestenbaum, one of the most experienced Formula Ford racers of all.

Racing with the Classic Formula Fords will be the 1-litre Historic F3 cars, with Michael Hibberd having a rare race in the ex-Chris Irwin Brabham BT18 taken to two wins at Donington by his son Andrew. His rivals include Simon Armer (March 703) and Ian Bankhurst (Alexis Mk8).

Racing on both Friday and Saturday will be the Classic F3/Classic FF2000 Championship. Pacesetters so far have been Andrew Smith in his March 783 and young Benn Tilley in his earlier March 743. However, a strong entry at Brands will bring drivers like Richard Trott (Chevron B43), Ian Jacobs (Ralt RT3) and Keith White (Ralt RT1) into the picture.

Sharing the grid for a pair of races will be the Aurora Trophy and the new Geoff Lees Trophy for single-seaters covering the 1970s and the 1980s. In the Aurora grid, the Formula 2 cars of Mark Charteris, John Harrison and Matthew Wrigley should be the pacesetters, whilst the Geoff Lees Trophy, catering for the 1980s cars, will get underway properly with Formula Ford Festival winner Rory Smith heading the entry.

The 70s Road Sports grid will have a 25-minute race on Sunday with another fine field headed by the Morgans of father and son Will and Richard Plant. Will has been the man to beat this season and Kevin Kivlochan will take up the battle in his Morgan. Several rapid TVRs will be topped by the hugely experienced Dave Karaskas in his 3000M.

Racing on Sunday only will be the Historic Touring Car Championship and it is Dan Williamson who is setting the standard this season in his Ford Falcon. He has several other American V8s as rivals, including Peter Hallford and Rob Fenn, while the quickest of the Lotus Cortina contingent should be Mike Gardiner, Bob Bullen and Mark Martin.

Running on Friday will be a field of Classic Clubmans and before they jump into their Formula 2 cars, Mark Charteris and John Harrison will field their familiar Mallocks at the head of the field. In the Formula Ford-engined class Steve Littler and Dave Facer are notable contenders. Out on Friday only is a guest race, a round of the Champion of Brands Formula Ford series for the Peter Rogers Trophy.

The guest races are topped by a fabulous field of period Grand Prix cars from the Historic Grand Prix Cars Association with three races across the weekend. The cars of the 1950s and early 1960s will make a glorious spectacle at Brands and these wonderful cars make a very welcome addition to this weekend’s programme.

On Saturday, a further eight races will run from 13.40 after qualifying from 09.00

On Sunday nine races will start from 12.00 after qualifying from 10.00

Our Website uses cookies to improve your experience. Please visit our HSCC heads to Brands Hatch for Super Prix page for more information about cookies and how we use them.