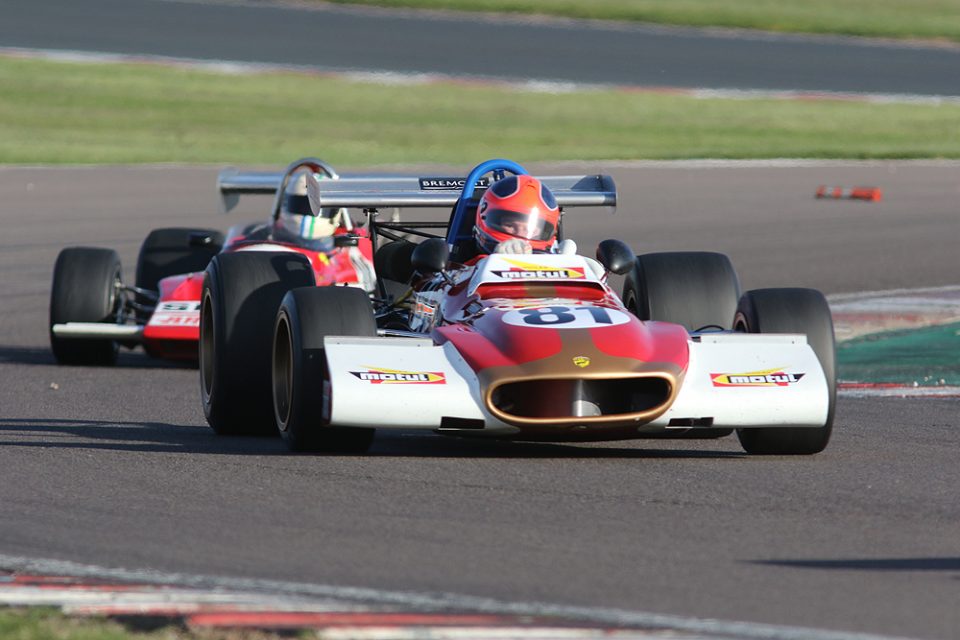 After two wonderful races F2 victories went to Callum Grant and Andrew Smith and it was Smith who also shared the Classic F3 wins on Friday with Conor Murphy. Although spectators could not be admitted to the event, a big audience enjoyed the coverage of the F2 races via a live-stream on Saturday afternoon. 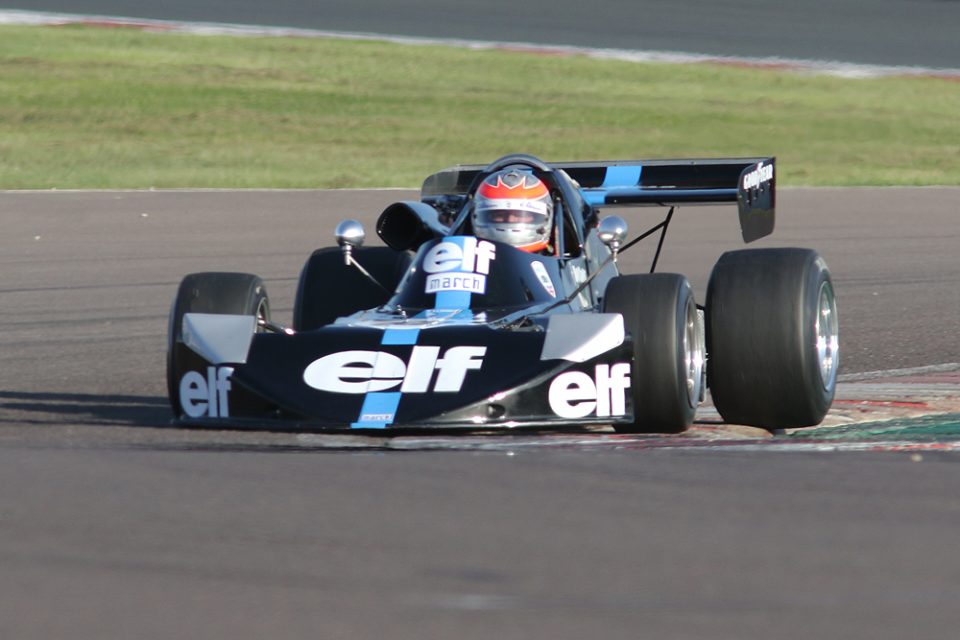 Despite the absence of the usual contingent of European racers, who were greatly missed both on and off the track, a fabulous 27-car field still assembled at a cool but bright Donington Park for a double-header. The F2 cars made a glorious spectacle at the superbly-presented track and it was Martin O’Connell who dominated qualifying in Sandy Watson’s Chevron B40. However, he switched the Chevron off shortly before the end of the session with a suspected dropped valve. 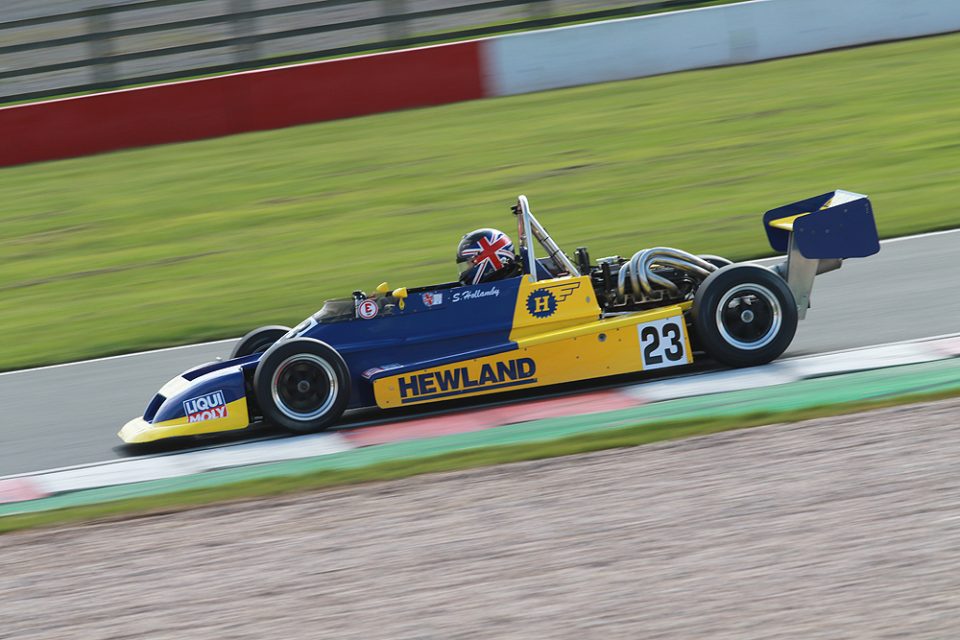 As the grid assembled, the front row was absent as second fastest qualifier Mark Charteris had a fuel leak develop on his March 742 as the team warmed the engine up before the race. With the front row missing it was Rob Wheldon who took the early lead in his March 762 with Matt Wrigley’s Chevron B40 in hot pursuit. Smith (March 742) was another retirement with an electrical problem. 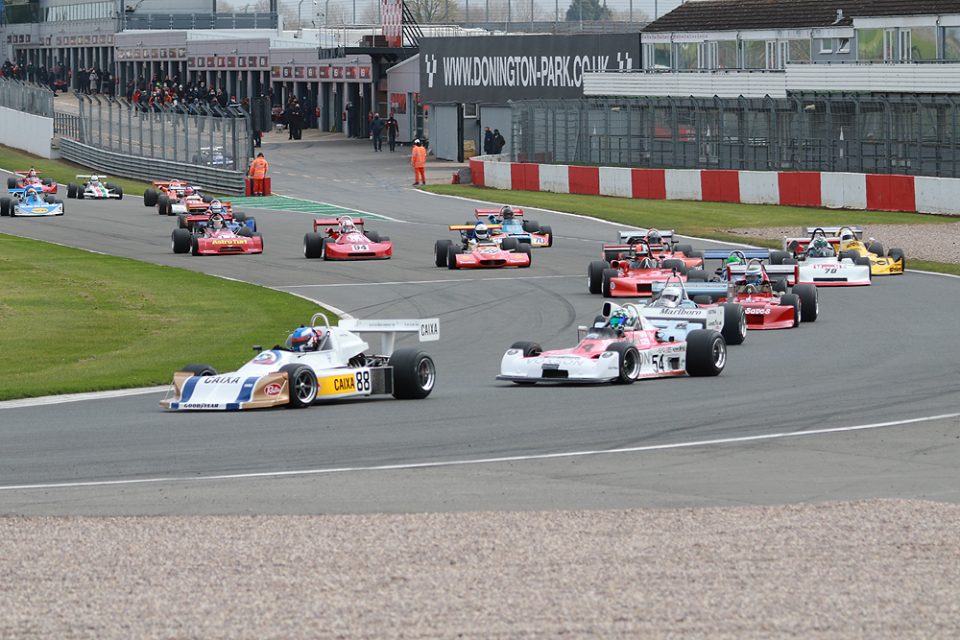 Fraser Gibney settled his Chevron B40 into third while Grant, driving superbly in his Formula Atlantic specification March 79B, set about the task of dislodging Martin Stretton (March 712) from fourth. He eventually did and duly set off in pursuit of Gibney. Meanwhile, up front, Wheldon retired with a broken driveshaft leaving Wrigley leading as Grant hunted him down. Then, with only a lap to run, Wrigley also lost a driveshaft so Grant jumped ahead and scored a famous win from Gibney and Stretton. “I didn’t expect that,” said an elated Grant. “It’s an amazing car with so much grip.” 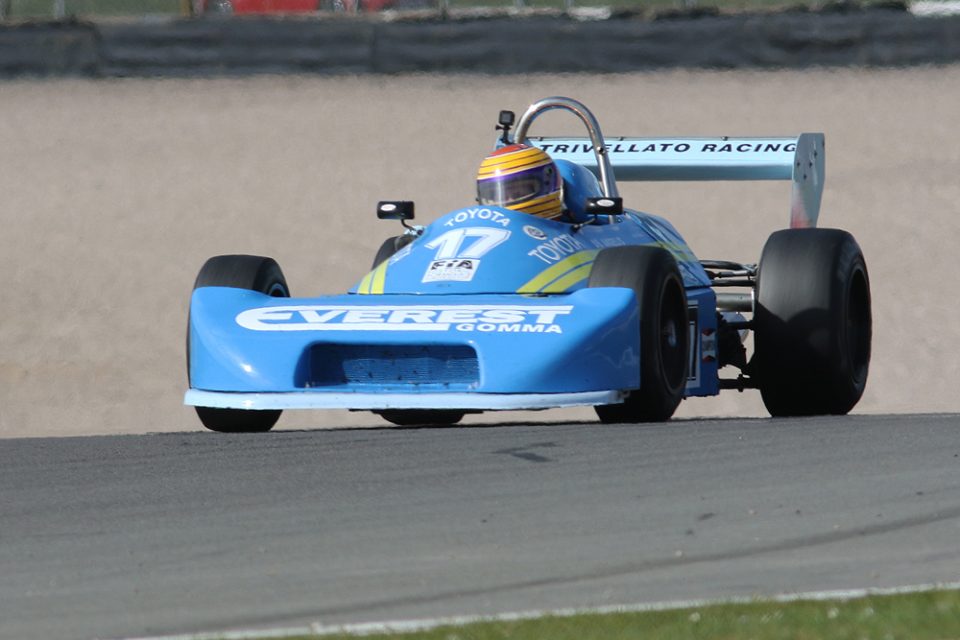 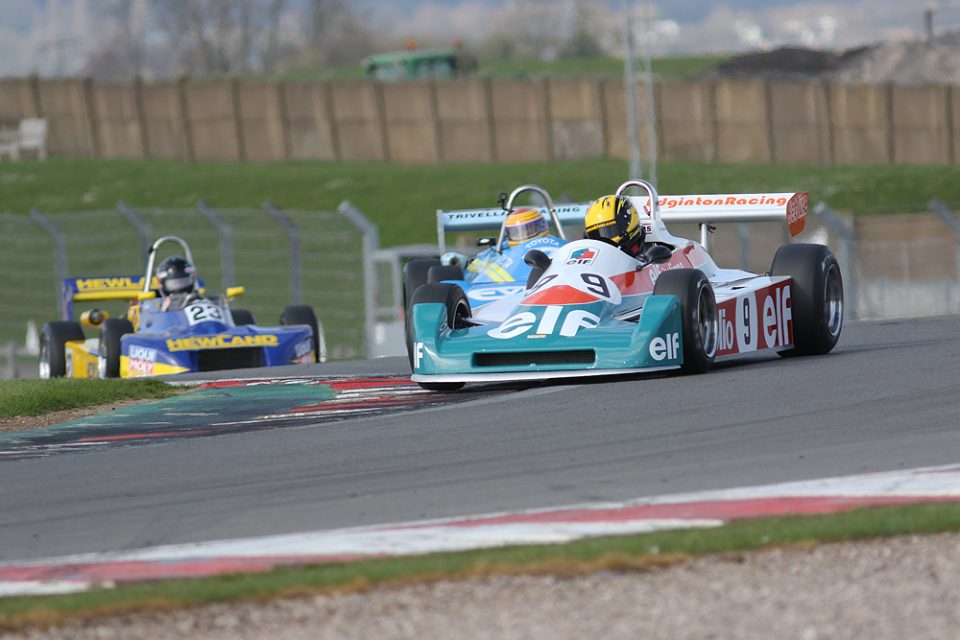 The second Historic Formula 2 race closed the weekend’s racing and was an absolute barnstormer. Race one retirements left Matt Wrigley, Rob Wheldon, Andrew Smith and Mark Charteris towards the back of the grid, all determined to get as far up the order as they could in the course of 25 minutes. 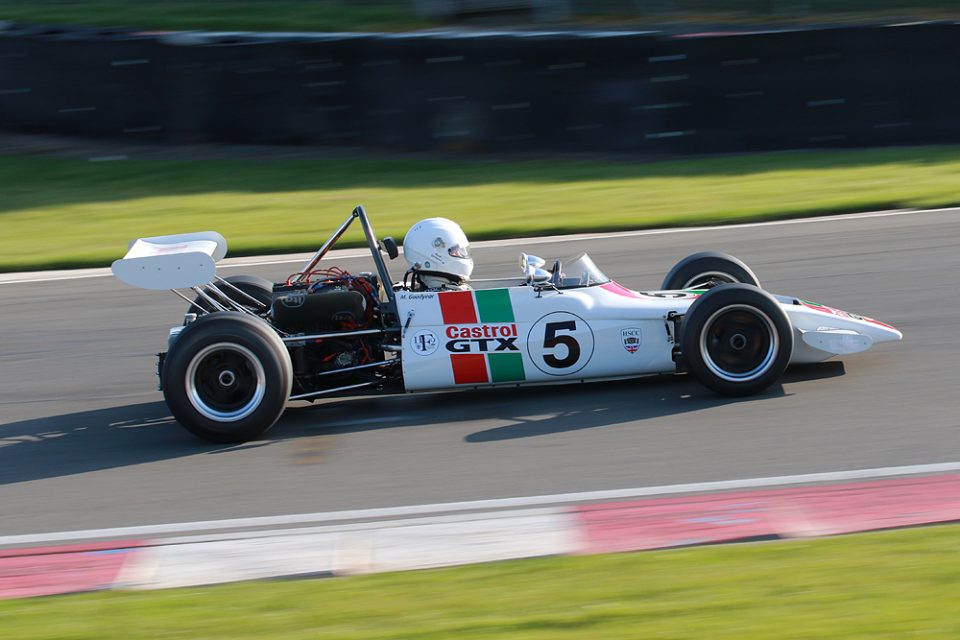 There was always going to be some hectic battling in the pack as the four front-runners fought to get through the order while Stretton and Grant set the early pace at the head of the field. Stretton got away best and headed Grant into the opening laps as the pack started to sort itself out. 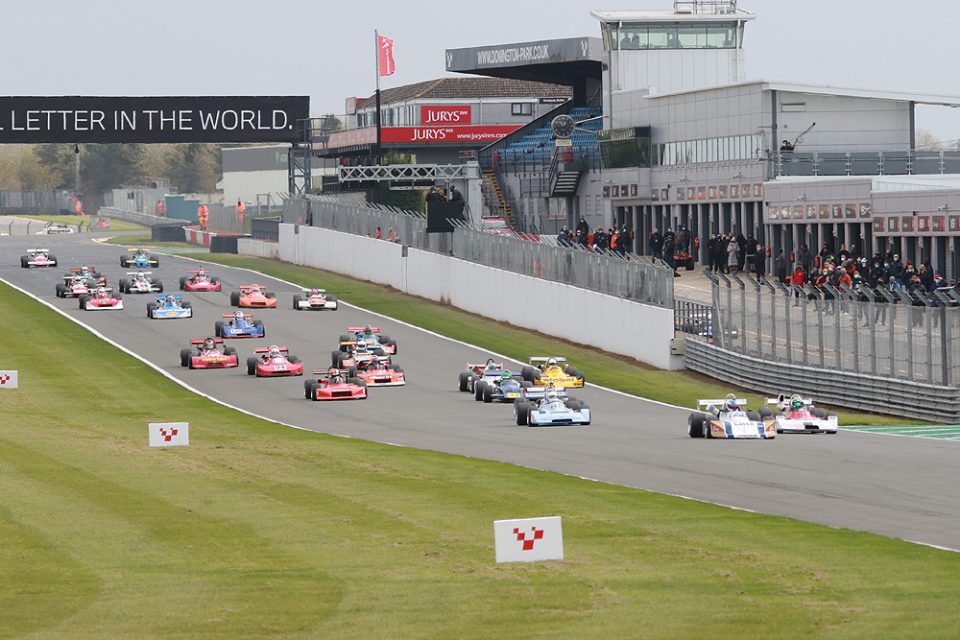 Before long, it was Smith making the best progress from the lower order starters and he passed car after car as he tigered his way through to the front. He then reeled in Stretton and Grant and sliced decisively ahead to secure a superb victory after a commanding drive. “That was quite a bit of ground to make up,” said Smith of his charge. 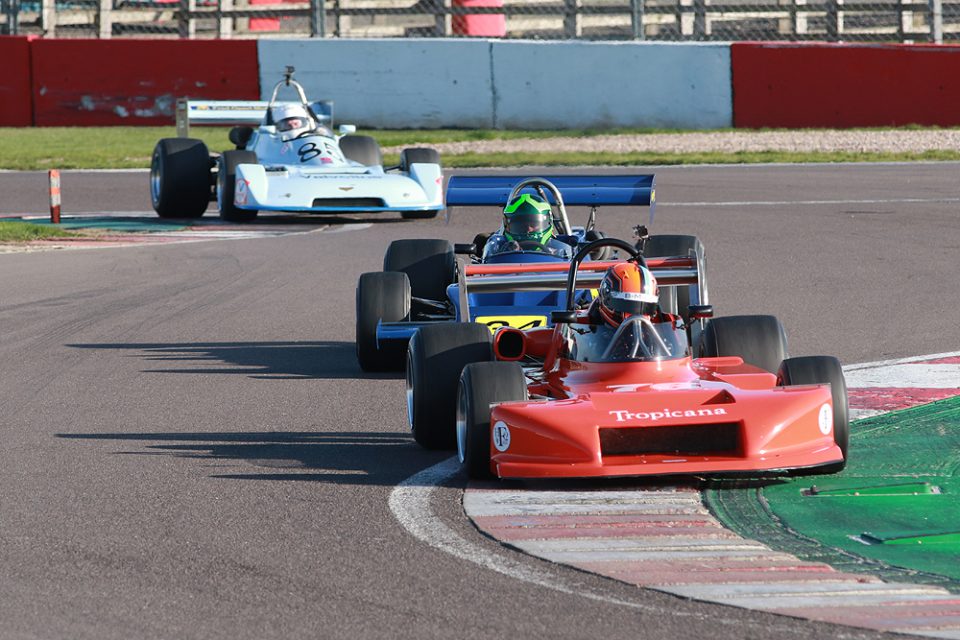 Grant always chased Stretton for second but never quite had a chance to challenge and that was how they finished as a late safety car took them to the chequered flag in convoy. Wrigley came through strongly to finish fourth with Charteris in hot pursuit. Martin Wood rounded out a fantastic Formula 2 debut with a strong sixth, having fended off the race long challenge of David Tomlin (Motul M1) and Goodyear again won his class. “I’ve had the best day ever,” said a jubilant Wood after a long break from racing. With battles all the way down the order it was a fine way to wrap up the weekend and open the Historic Formula 2 season.

The Classic Formula 3 and Classic Formula Ford 2000 season kicked off with a double-header on Good Friday. The end result was wins for Connor Murphy and Andrew Smith in Formula 3, and a double win for Eric Pagano in FF2000.

Murphy and Smith were the class of the F3 pack after some stunningly fast times in qualifying. In the opening race, Murphy got the jump at the start and, after an early safety car period, had built a small cushion to Smith. However, lap-by-lap, the gap came down, and it was less than a fifth of a second by the finish as Murphy took his first Classic F3 win in his March 803. 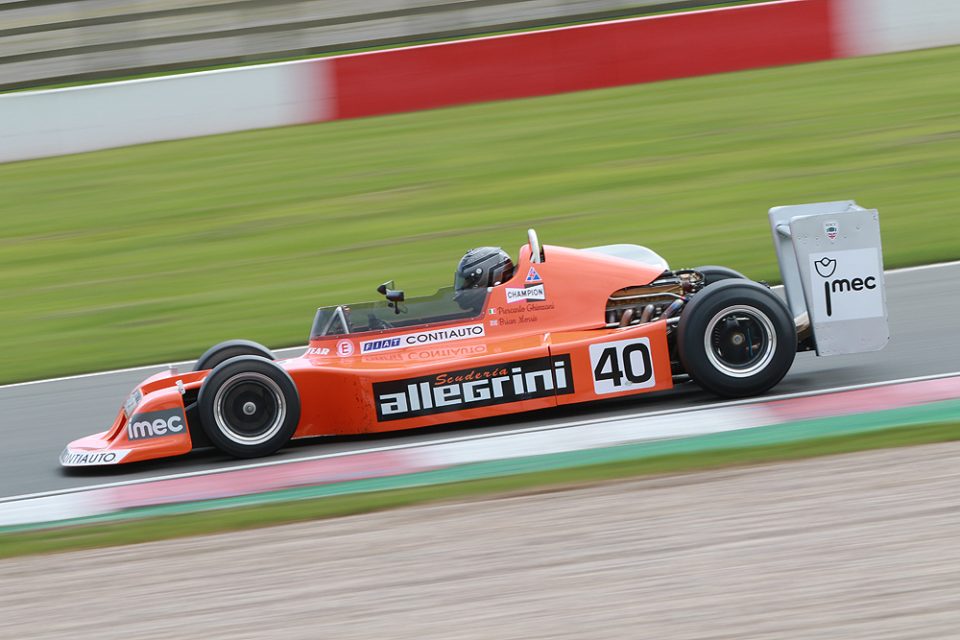 Behind them, Benn Tilley dropped time off the start after being caught out in his first standing start in his March 743. However, he battled back ahead of Anthony Hancock’s Lola T670 to claim third place.

In the second race, Murphy again led until he was caught out in traffic at McLean’s and lost the lead to Smith. Soon afterwards, the Murphy March headed for the pits and retirement when a misfire set in and that left Smith comfortably clear of the battle for second. Once again Tilley got the better of Hancock to take the place and further back a tremendous dice between Lee Cunningham, Shaun Hollamby and Keith White went all the way to the flag.

In the FF2000 section Pagani spent most of both races with Murray Shepard right on his gearbox. That was how they finished in the first race and in the second race it was just as close, if not closer still, until a skirmish going into Redgate left Shepherd spinning and losing time before recovering for second place.

Words and Photos thanks to Paul Lawrence.

Our Website uses cookies to improve your experience. Please visit our Historic F2 stars at Donington Park page for more information about cookies and how we use them.