There was plenty of heroic action and superb racing away from the main event at this year’s Spa Six Hour meeting not least the eye watering bravery required to drive LMP cars on a wet dark rainy Spa. We take a look at some of the race highlights. 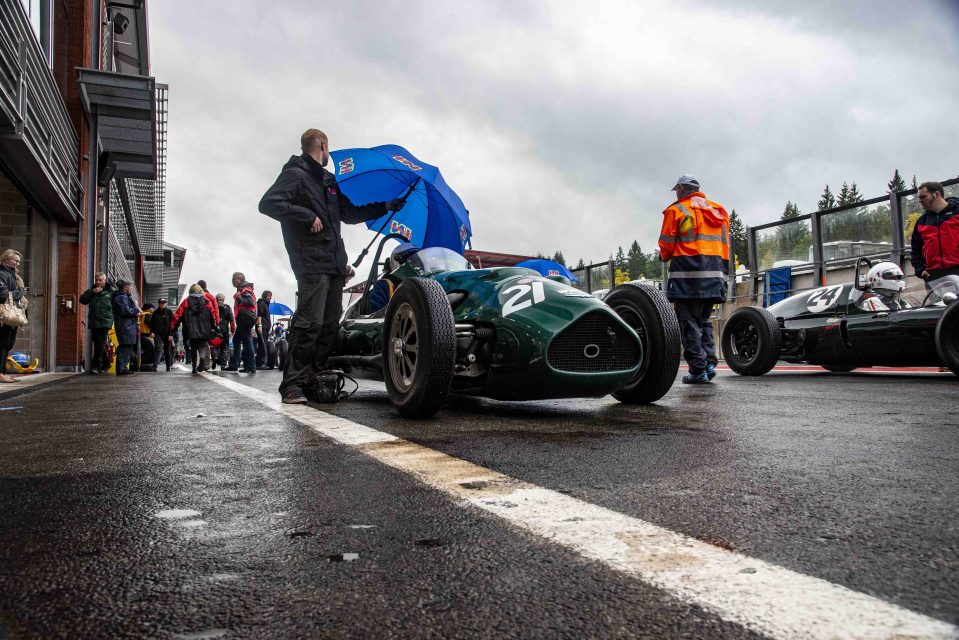 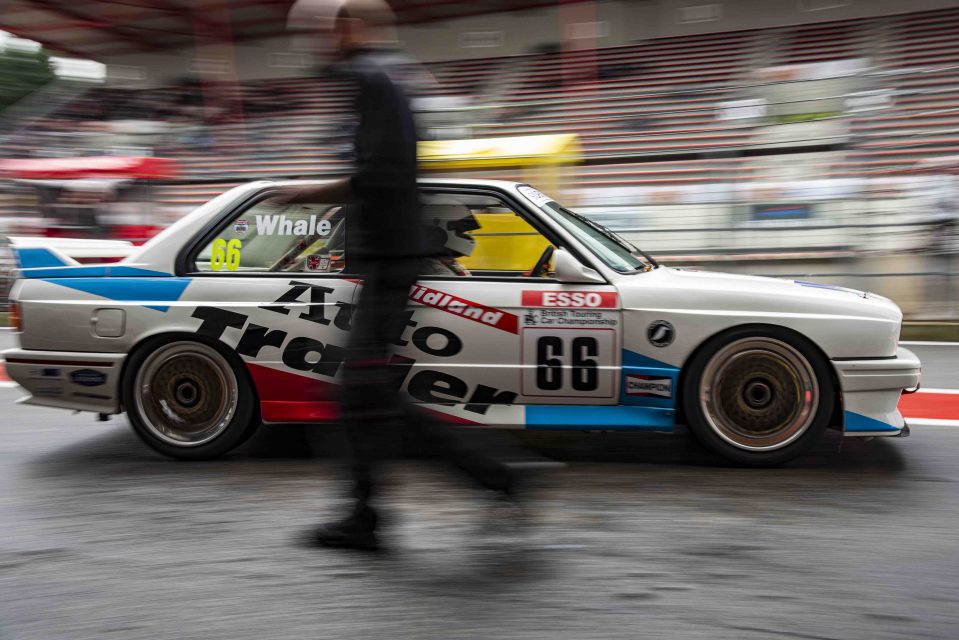 Mixed conditions all weekend made survival tough at times, and tyre choice crucial, but Dance in his Weisberg tools tribute-liveried car wailed past Friday’s chequered flag 1.482s clear of Calum Lockie in Julian Thomas’ Kaliber Sierra RS500 which the duo had wrestled through from the back of the grid following a stub axle failure in qualifying earlier in the day. 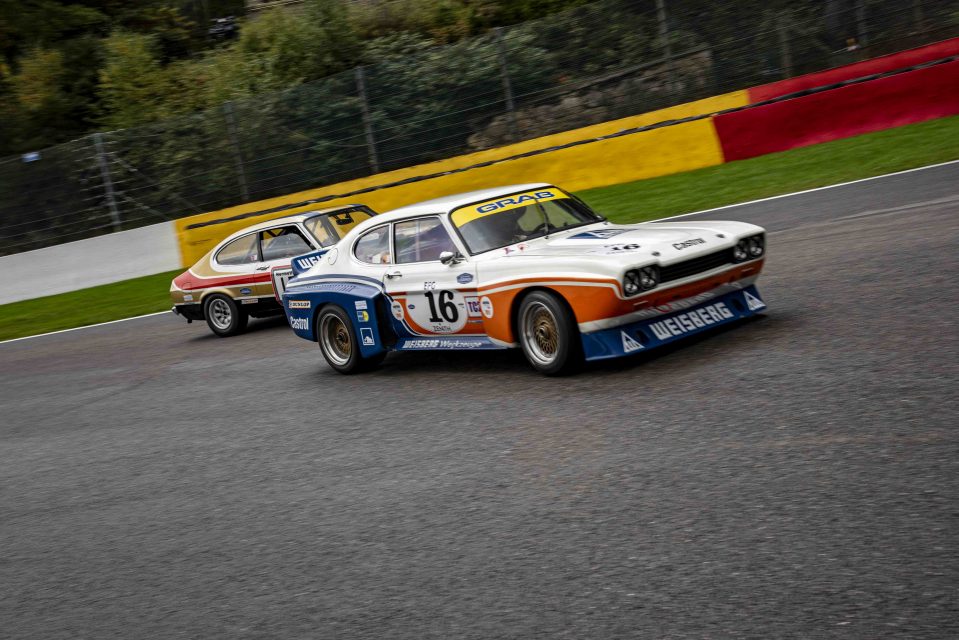 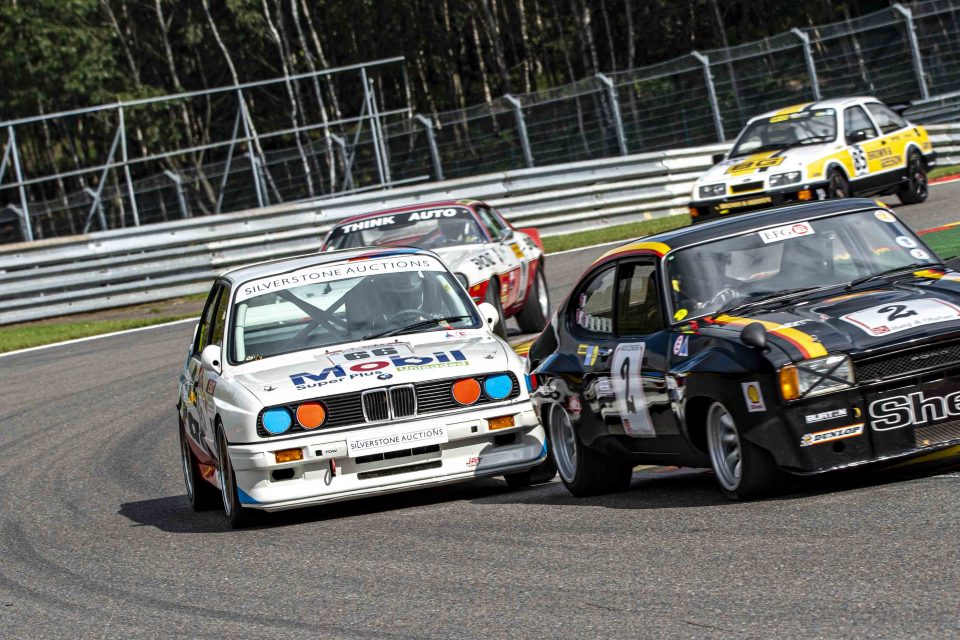 Saturday’s wetter going was manna to Whale in his father Nick’s original Auto Trader ‘Beemer,’ with its 2.5-litre DTM-spec engine. “Spa in the wet is M3 territory. Spa in the dry is not; we’d have been about 10th,” smiled Mr Silverstone Auctions, who soloed in the opener. Dance summoned all his reflexes in the potent Capri-GAA to finish runner-up, 1.855s behind and clear of the Sierras of Max and Ian Goff and Sean and Daniel Brown, the latter’s completed earlier in the week. 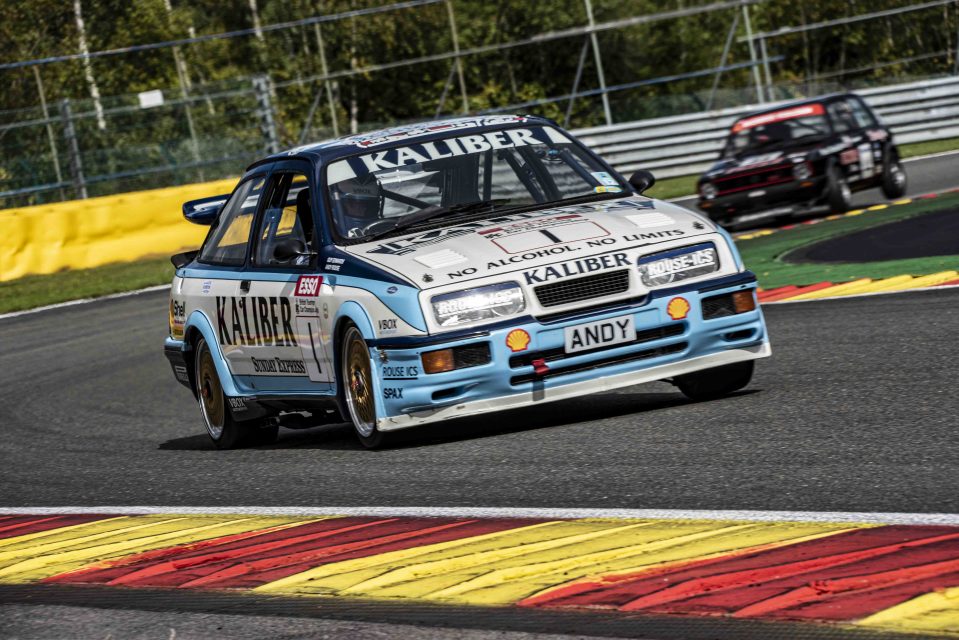 The TDT Group 1 set also had different winners. James Hanson/George Pochciol (Ford Capri) beat the gallant VW Golf GTi of Jim Morris/Tom Shephard and John Spiers’ Capri by a few seconds on day one and finished 13th overall. Olly Bryant took his turn in the family Chevrolet Camaro – piloted by dad Grahame in the opener – and growled home eighth in the sequel, in which the plucky Golf was again second. 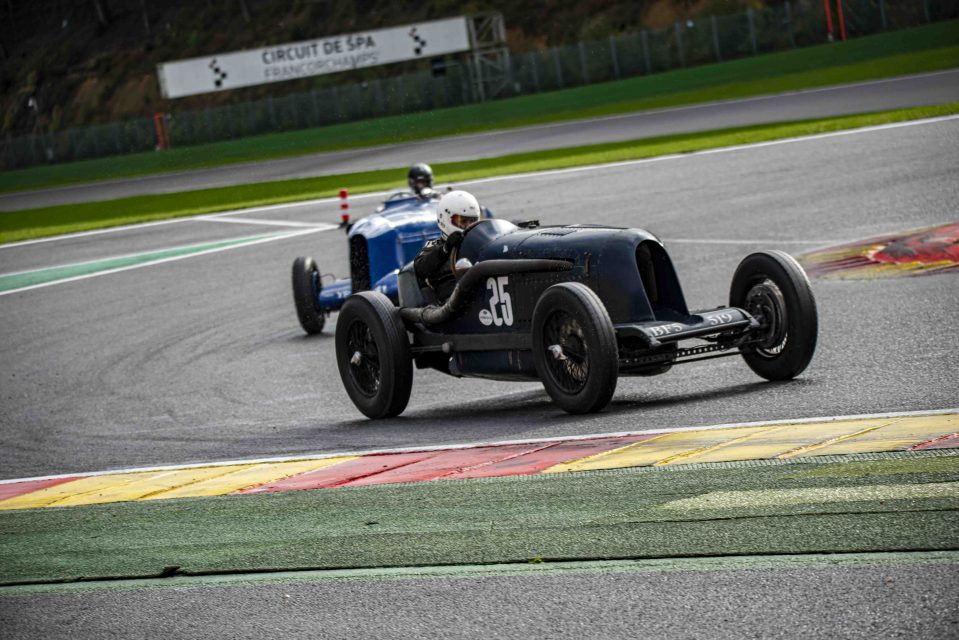 Unable to live with Tuluie’s monster as the rain fell, Gareth Burnett (Alta Sports) backed off to finish a safe second and claim Standard and Modified car honours. Third overall, and darling of the spectators, was the gallant 1260cc Morgan Super Aero of Ewan Cameron/Sue Darbyshire, whose aspirational rain dance was not quite answered. Staggeringly, the intrepid Cameron, who started Sue’s black three-wheeler, was quickest of all through the speed trap over the weekend, clocking 98.85mph on lap three of the race! 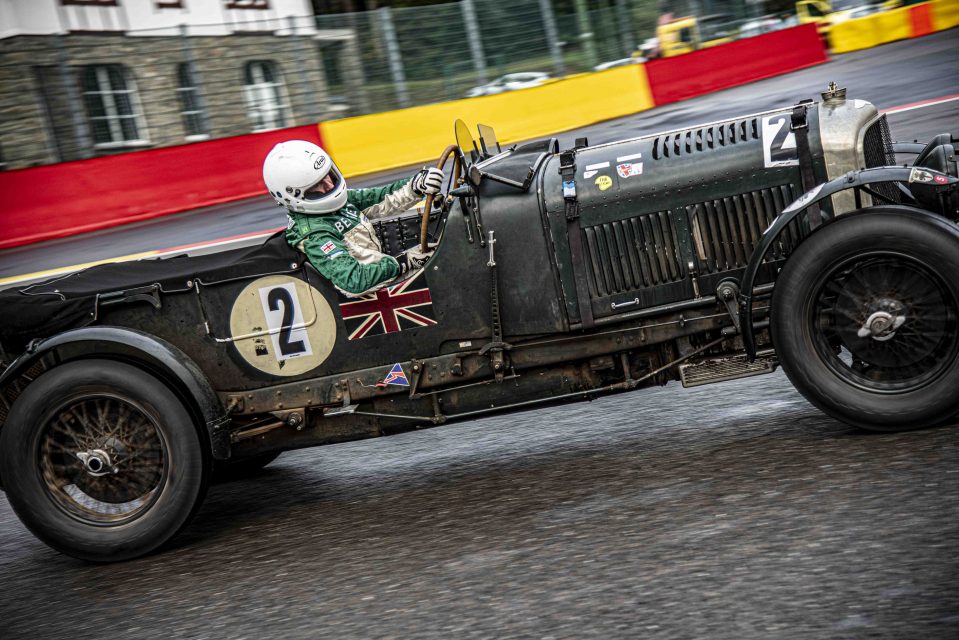 Also attracting much attention in the paddock and on track was German Stephan Rettenmaier’s gorgeous British Racing Green Alfa Romeo 8C 2300 LM – a sister car to Lord Howe’s 1931 Le Mans winner, albeit this example failed to finish the French classic – plucked from the family’s mouthwatering collection of Italiana and fettled by Ingo Grimm.

Driving their Costin-bodied Lister-Jaguar together for the first time, Rotterdam-based father-and-son David and Olivier Hart blitzed the Lister Motor Company-supported Stirling Moss Trophy race at the Spa Six Hours event on September 28. A combination of speed and tactics on a wet track won the day, Hart Senior stopping early from the lead to bring 20-year-old Junior’s lightning reflexes into play. 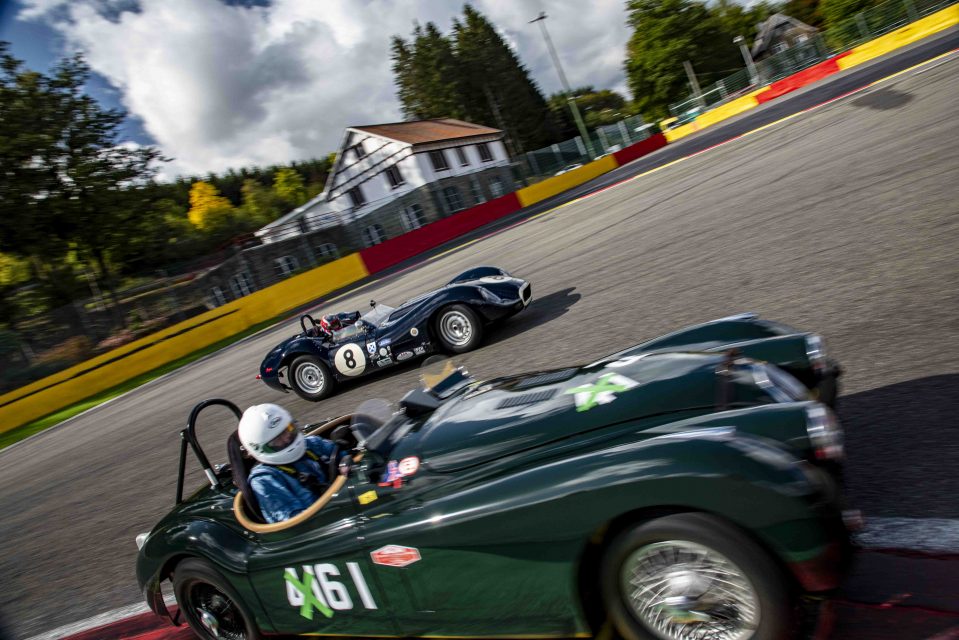 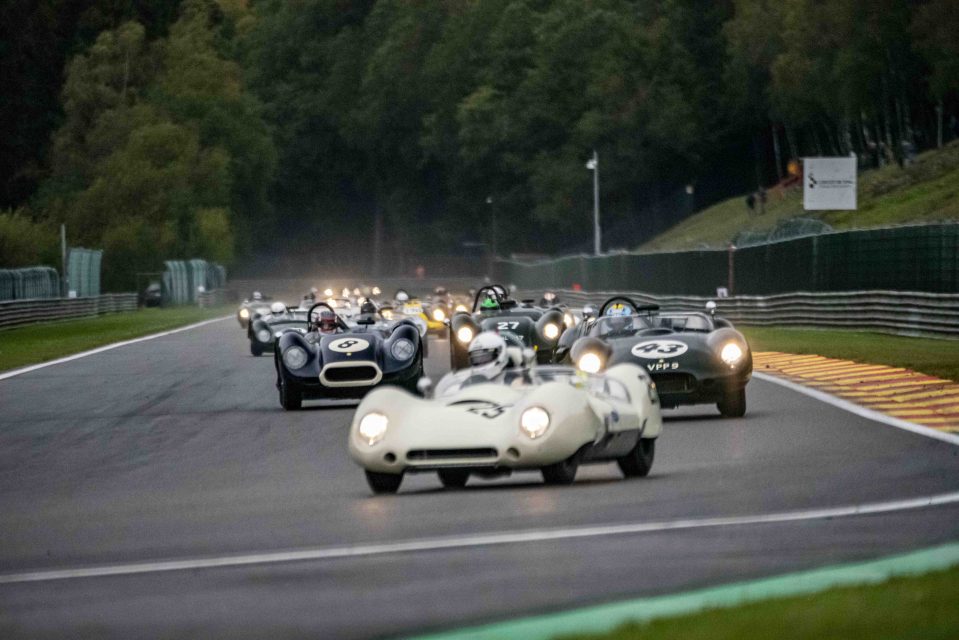 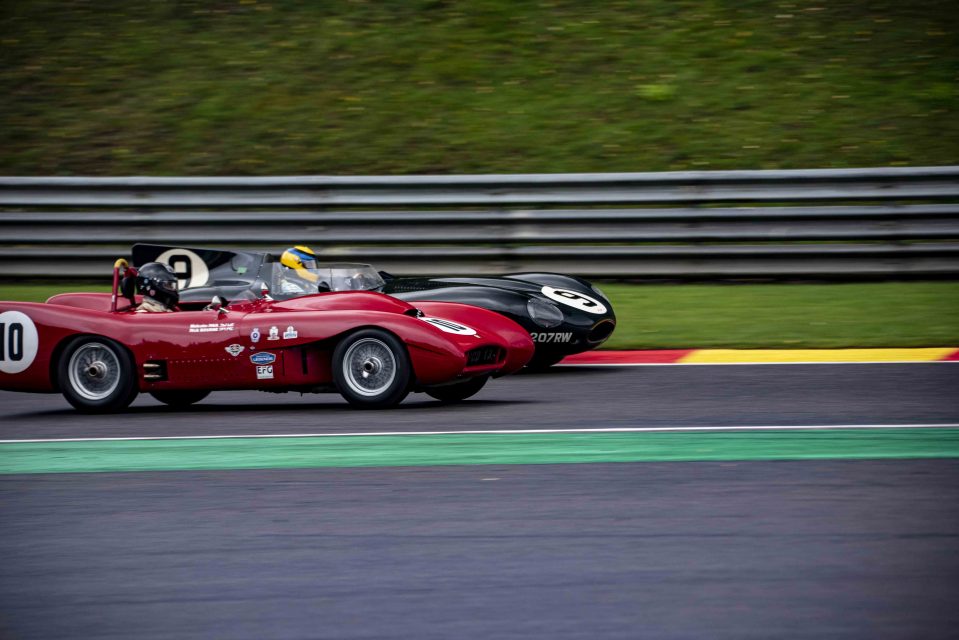 In the concurrent Woodcote Trophy Pre-1956 contest, Gary Pearson hauled Brazilian Carlos Monteverde’s white ex-Border Reivers/Jim Clark Jaguar D-type back to the head of the rankings, where he had qualified it 13th overall behind the cream of the Pre-’61 machinery. But Pearson had to work hard to overhaul Tim Llewellyn’s 6.6-litre Cadillac V8-engined Allard J2, handed over in the lead by son Oliver. Barely five seconds split them at the chequer, with the Maserati 300S of Spain’s Guillermo Fierro and British preparer Steve Hart third in the EFG Private Bank-supported race.

Julian Thomas and Calum Lockie ended their Masters Gentlemen Drivers season in style by taking their sixth win in the Shelby Cobra Daytona Coupé. On a very wet Spa-Francorchamps circuit, the pair led from the start but faced a strong challenge from the similar Daytona Cobra shared by James Hanson and Andy Wolfe. At the end of their stint, Hanson grabbed first from Thomas but then the former was hit by a stop-and-go penalty.

In an all-out effort to negate the deficit, Wolfe hunted down Lockie with fastest lap after fastest lap but his demon drive came to a premature end when on lap 21 his Daytona Cobra suddenly snapped sideways at the back of the circuit moments after he had wiped out Lockie’s advantage and was about to make his move for the lead.

Oliver Bryant produced a stunning wet-weather display by trouncing the opposition in the FIA Masters Historic Sports Car race at Spa. In his Lola T70 Mk3B, Bryant dropped his rivals by a minute to complete a dominant display and repeat his previous FIA MHSSC wins at this event. 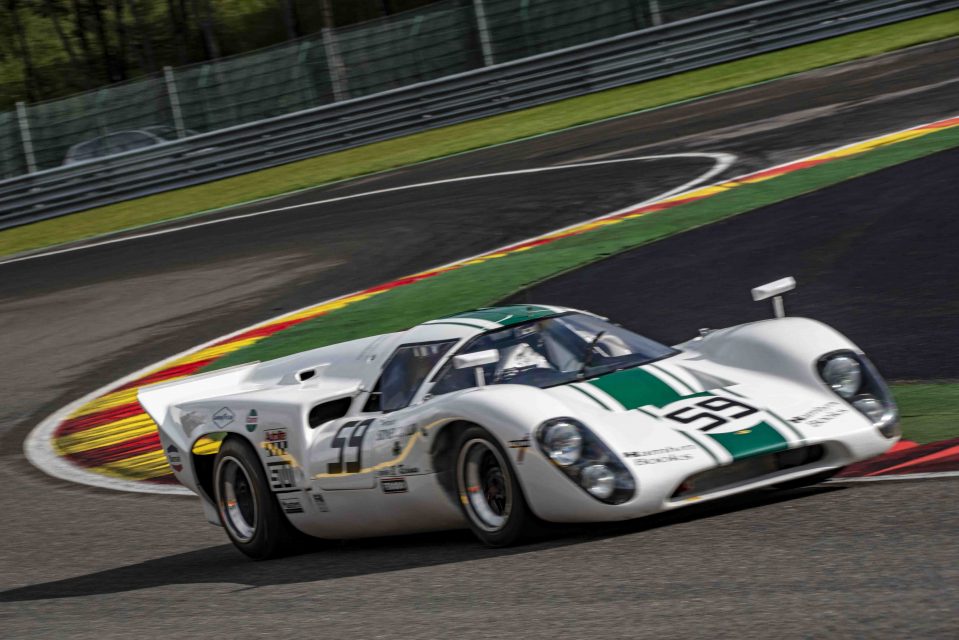 Leading the chasing pack were Jason Wright and Andy Wolfe in another T70 Mk3B, Wolfe hunting down and passing Max Banks for second on lap 16. Max’ brother Andrew had started the race from pole but their McLaren M6B was soon usurped by the unstoppable Bryant. Pedro Macedo Silva’s T70 Mk3B took a lonely fourth ahead of the Diogo Ferrão/Manfredo Rossi Lola T292 and Michael Gans in the Lola T290. 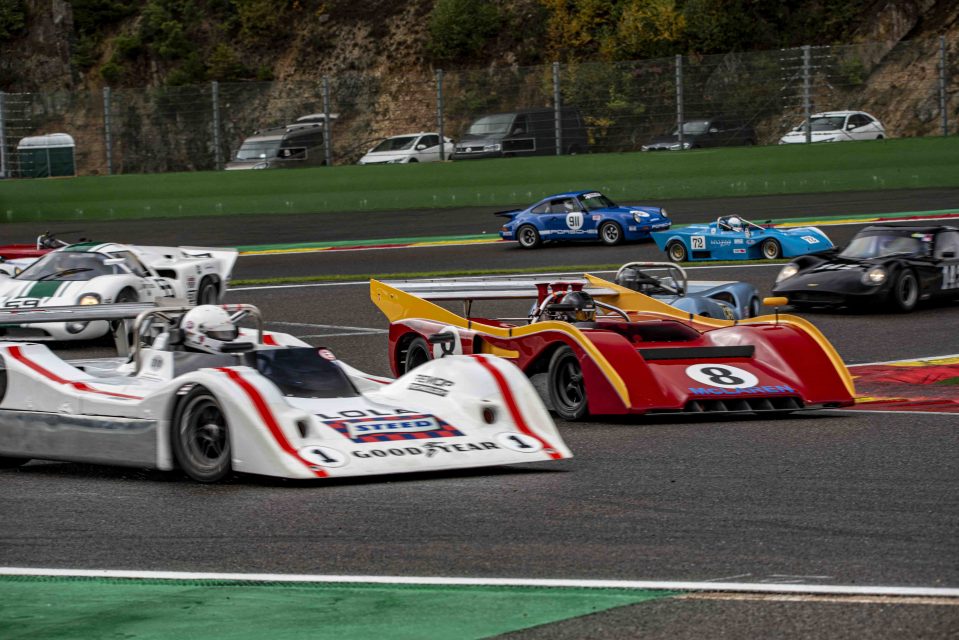 Steve Hartley braved the fickle Ardennes weather to win the weekend’s first FIA Masters Historic Formula One race of the Spa Six Hours meeting. In a wet race blighted by safety cars, Hartley’s McLaren MP4/1 hit the front in a final-lap dash to the line, beating Mike Cantillon’s Williams FW07C, who had claimed the lead from pole-sitter Christophe d’Ansembourg’s FW07C on the opening green lap. 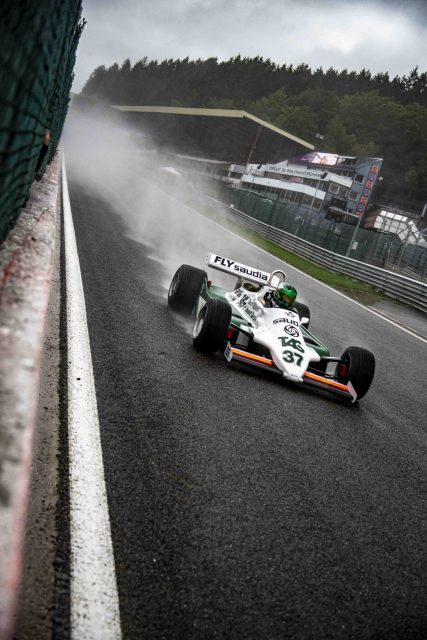 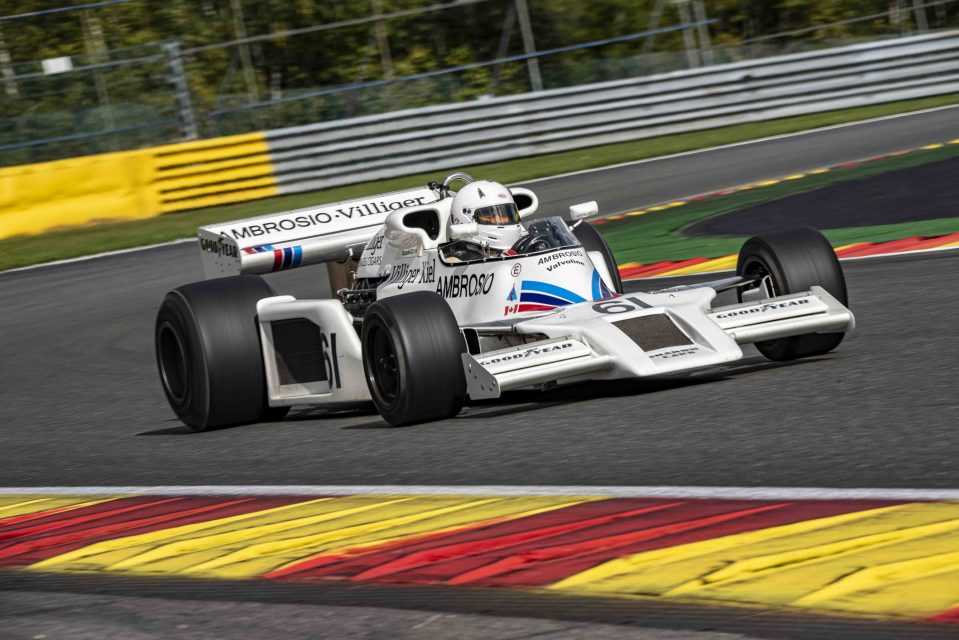 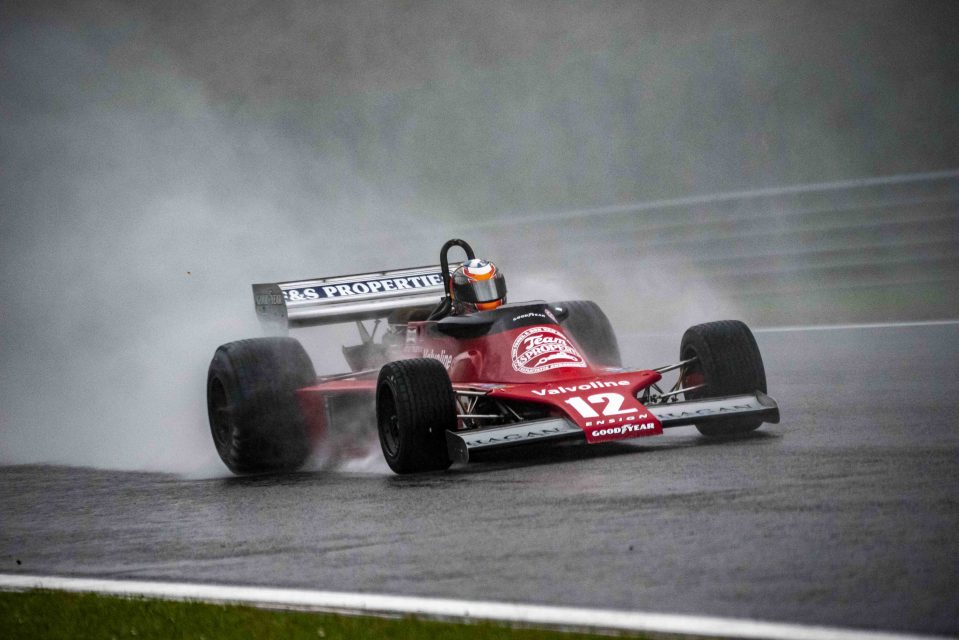 In race 2 Kyle Tilley (Ensign N177) was in a class of his own in a very wet second FIA Masters Historic Formula One race, taking the field by storm from sixth on the grid. Unperturbed by a triplet of safety-car interruptions in the opening stages, the American-based Briton hit the front by rising from fourth to first in one single lap. Posting fastest lap after fastest lap thereafter, Tilley eventually won by 16 seconds from Jason Wright’s Shadow DN8. 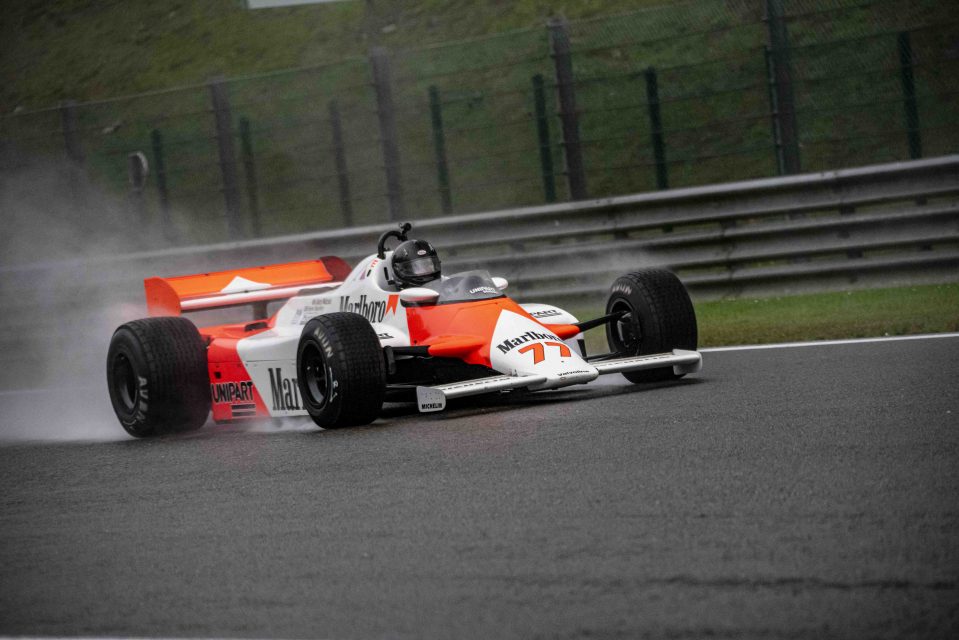 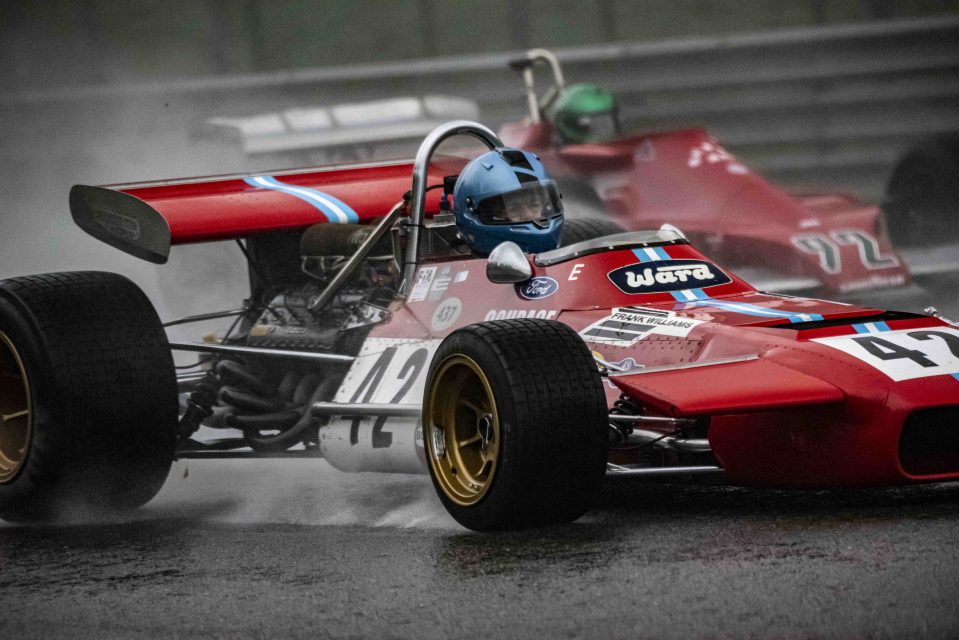 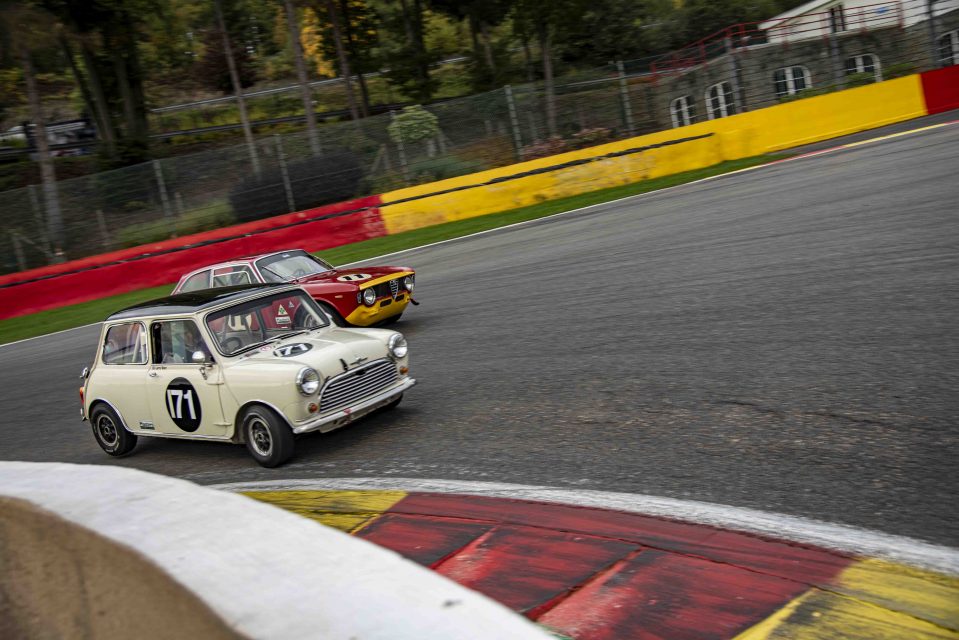 Davies jumped pole-sitter Hart at the start and never looked back. Behind the winner, Hart worked with Thomas in a combined effort to catch Davies before being hit by a five-second time penalty for exceeding track limits. That blunted the young Dutchman’s challenge in his second stint, in which he became focused on fending off a strong run by Alex Taylor in a Ford Mustang. 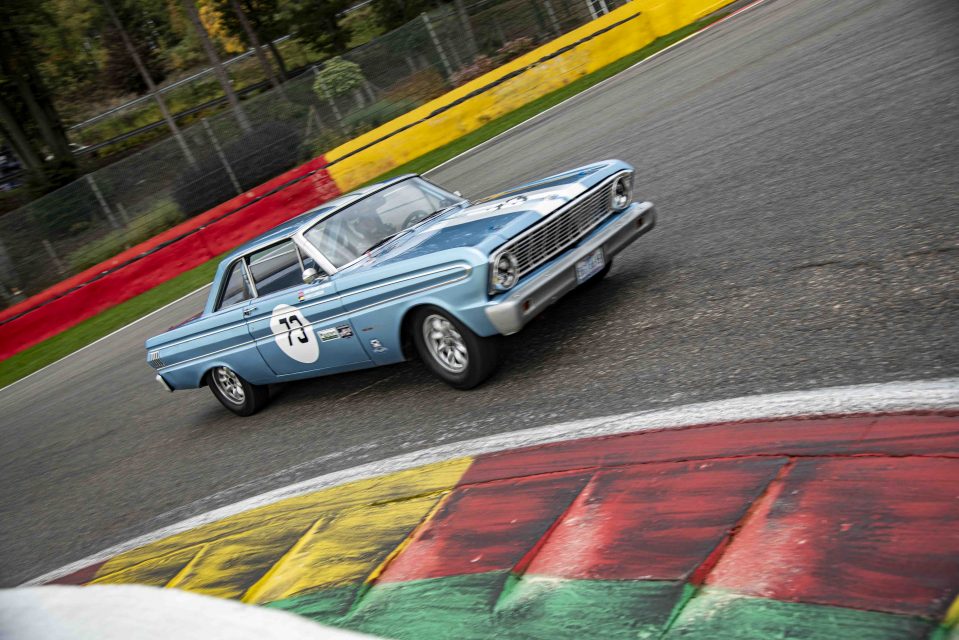 Steve Tandy was in a class of his own in the Aston Martin Masters Endurance Legends night race at Spa, his Lola-Mazda B12/60 edging out a lead of over 20 seconds before conserving the car for a dominant win over Christophe d’Ansembourg’s Lola-Aston Martin DBR1/2 and Kriton Lendoudis’ Peugeot 90X. As indeed d’Ansembourg had been hit by a 23-second time penalty for missing the pit window, it was nip and tuck with Lendoudis for second place – trailing the Belgian by just over 23 seconds! 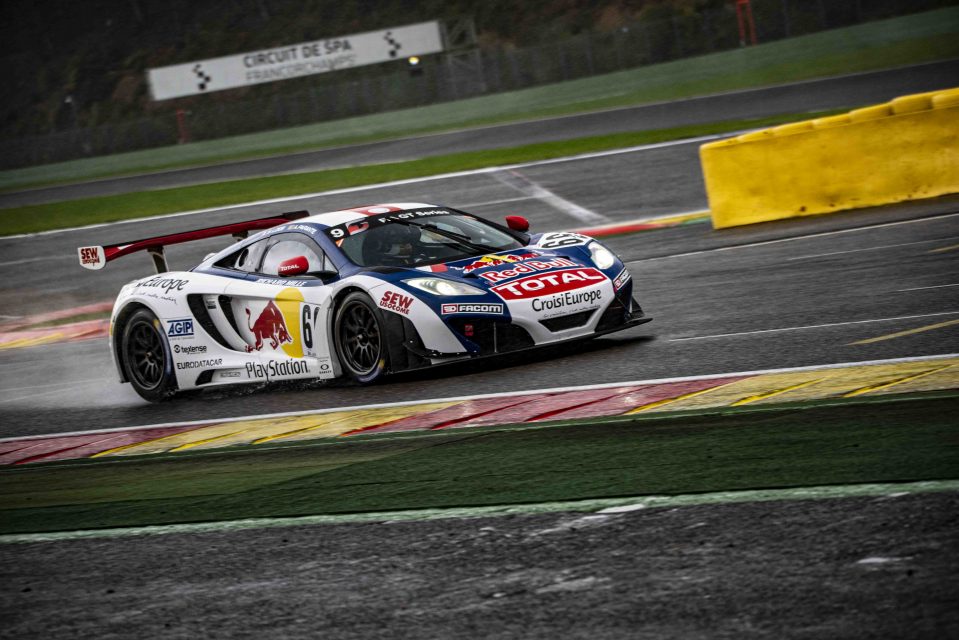 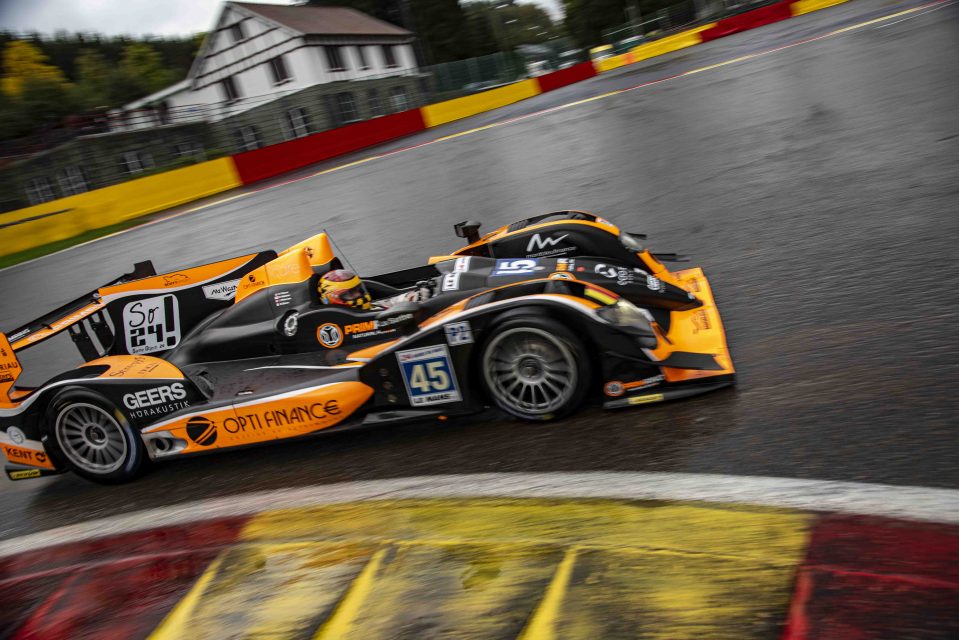 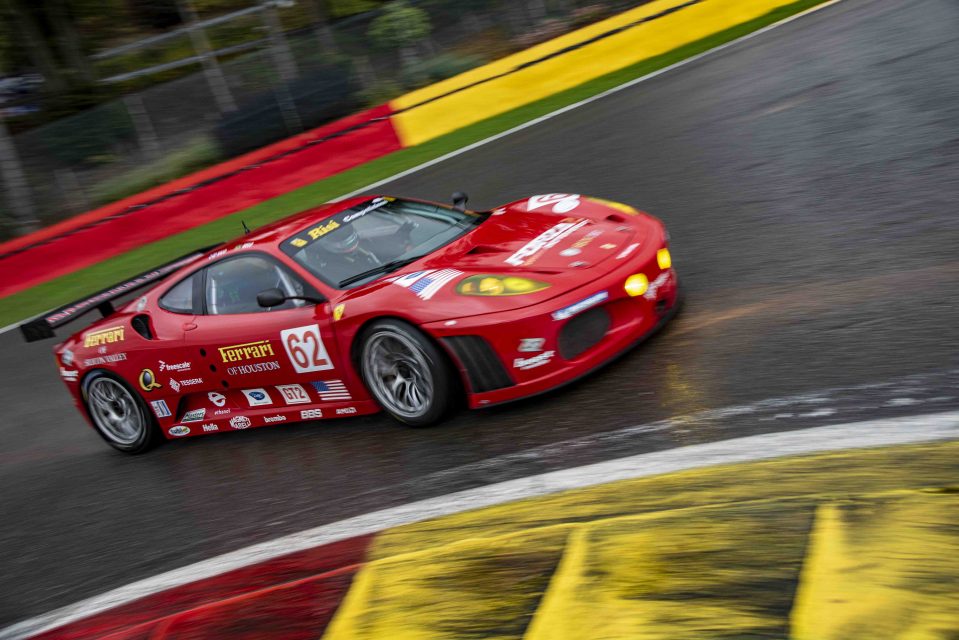 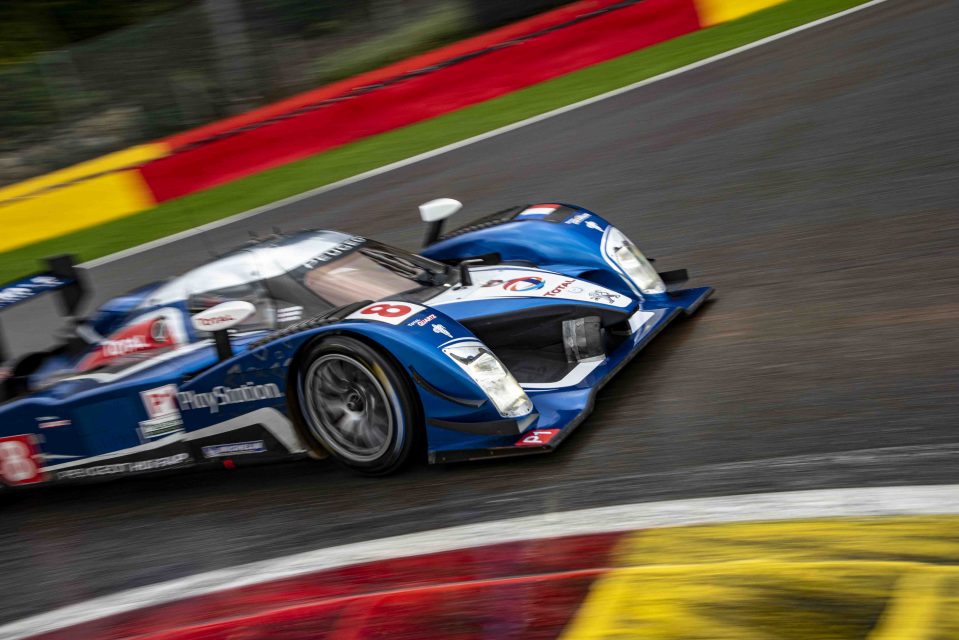 In the second race, David Hart and Nicky Pastorelli took their Maserati MC12 GT1 by the scruff of its neck to grab a stunning overall victory on a very wet Spa circuit. A quick first-lap pitstop for rain tyres and then a searing pace by Pastorelli in the wet proved to be the main ingredients for their win over Christophe d’Ansembourg’s Lola-Aston Martin DBR1/2. 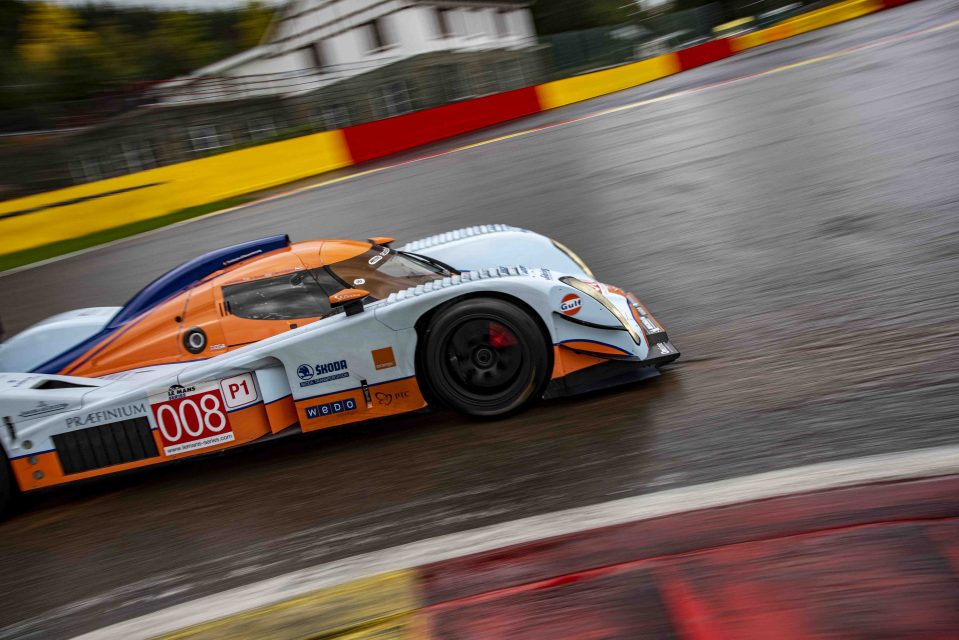 Having started out on rain tyres, Markus van Oeynhausen’s invitational Audi R8 LMS Ultra GT3 car crossed the line in third while Steve Tandy looked to have beaten Kriton Lendoudis to fourth after a tense fight between the Lola-Mazda B12/60 and the Peugeot 90X. Tandy’s pass in the final corner, however, came to be by overshooting the chicane, so the winner of the first race had to give the place back to his Greek rival. Meanwhile, Keith Frieser secured the P2 class win by finishing sixth in the ORECA-Nissan 03.

These fabulous images (and there are lots more) were sent to us courtesy of @fullthrottlephotosoliver -Please do not use them without his permission. If you would like to contact Oliver Flower for images of your car please click here – to email him directly via his website

Our Website uses cookies to improve your experience. Please visit our Spa Six Hour Support Races page for more information about cookies and how we use them.