1,750 km, 185 participants and many new features were enjoyed for the 35th edition of the historic re-enactment for vintage motorcycles 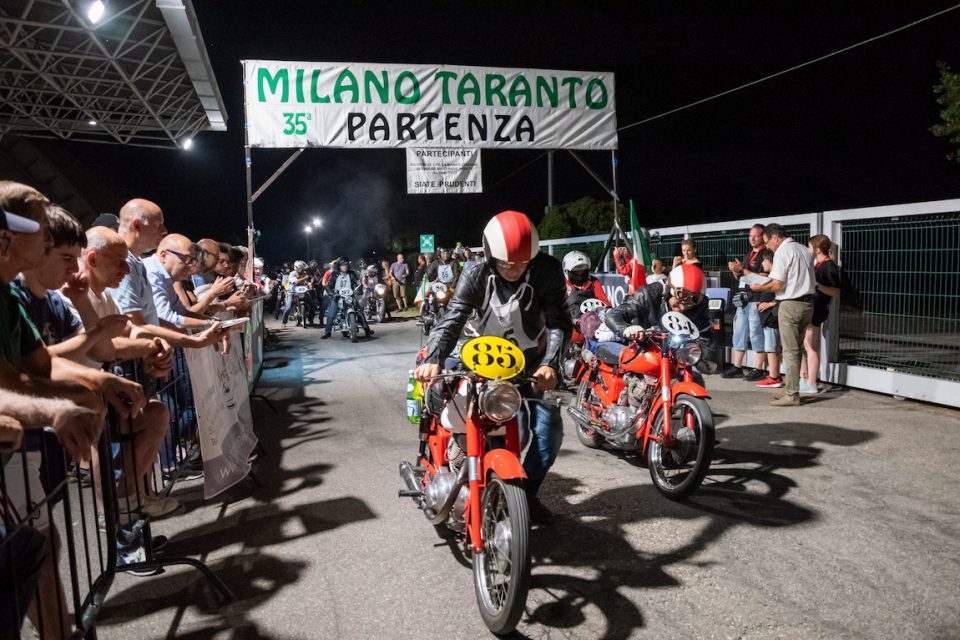 From 185 starters, 170 participants completed the 1,750 km of the Milan-Taranto 2022, held from 3 to 9 July last. Brave and passionate competitors who happily faced the 6 hard but incredible days of the historic re-enactment for vintage motorcycles, among a thousand emotions, discovery of the Italian territory, its beauties and its flavors, adventure, friendship. The event, also this year, was able to count on the support and warm welcome of local associations and institutions, present at the various daily stops and for the time controls.

There are also many innovations in the 35th edition which was that of the restart, after the two-year interruption due to the pandemic. The location chosen for the start is new, the Novegro Exhibition Park, where the participants were able to meet the race director, Tito Celoni, another novelty for 2022. Other more technical innovations were the involvement of the Italian Timekeepers Federation for the execution of the Time controls and the use of GPS locators for all participating motorbikes: elements that raise the level of the event ensuring greater precision and safety. 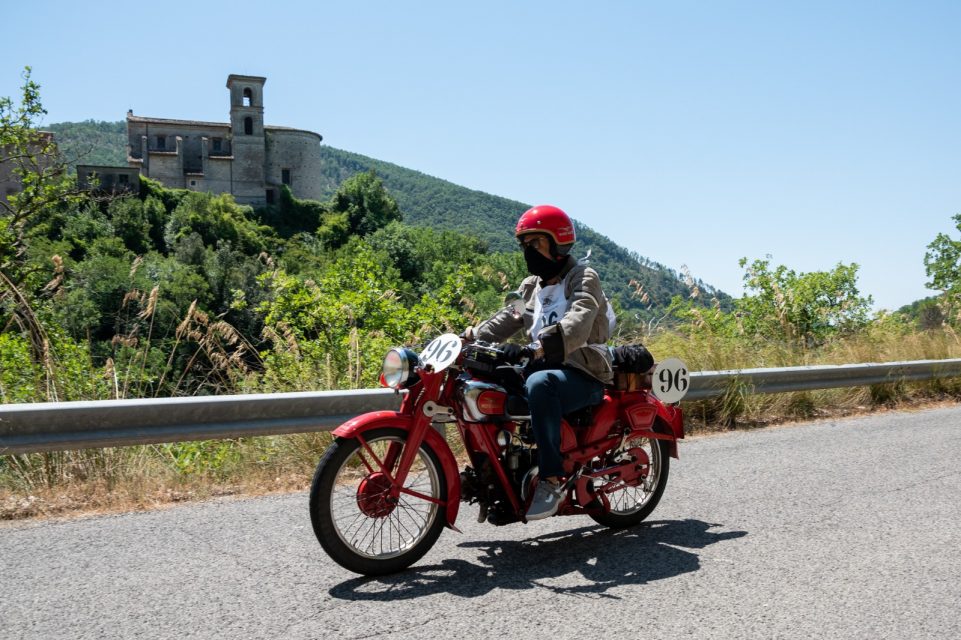 The 35th Milan-Taranto was a real party that lasted six days and all in the name of the enthusiasm to meet and rediscover the pleasure of living a unique and beautiful experience. 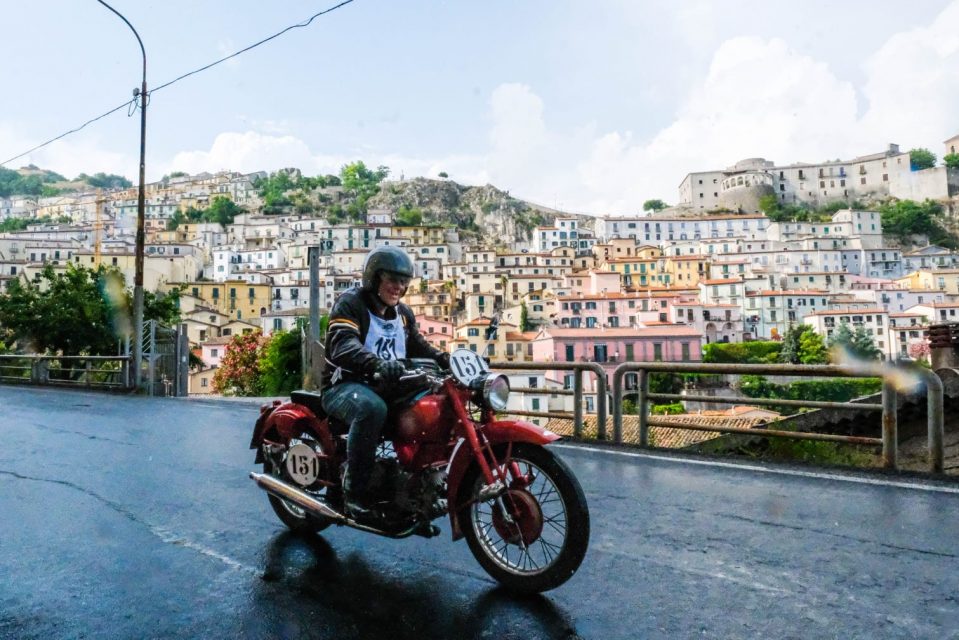 The 2022 adventure began from the early afternoon of a hot and sultry 3 July precisely from the Novegro Exhibition Park where the great heat and the beating sun were barely felt, between greetings and laughter, memories to share and new promises of many kilometers still to go together. Until the evening, arrivals, registrations and technical checks continued, all carried out by the MITA Staff led by the Sabatini sisters, Lina, Natalina and Claudia and, at midnight split, the departure which was attended, as usual, by the mayor of Segrate Paolo Micheli and Daniela Sapori for Eicma our institutional partner. 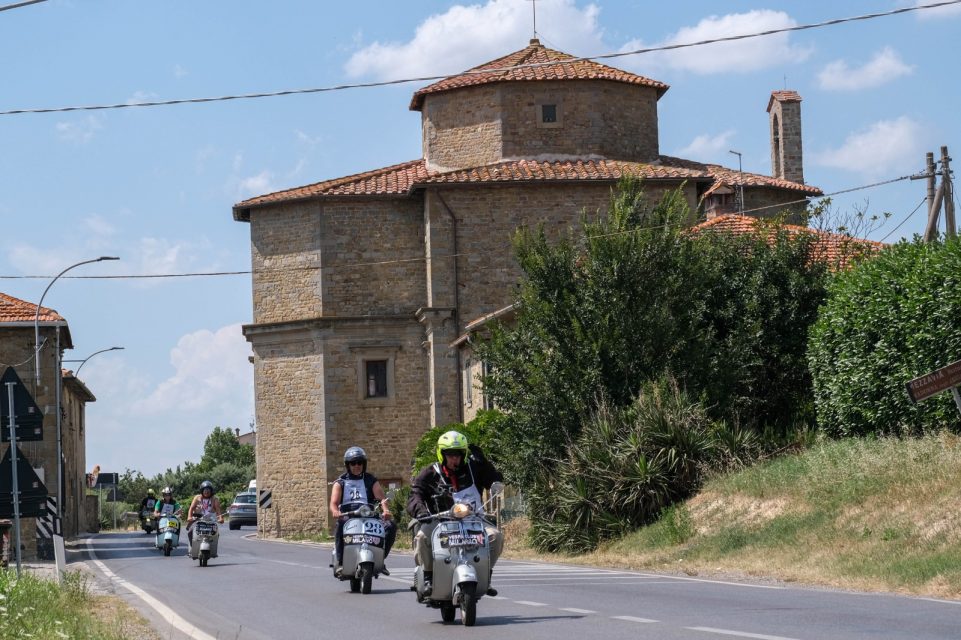 The first time control was in Crema where the Crema Moto Club and the municipal administration, awaiting the passage and the stop of the Milan-Taranto 2022, organized an entire day of motorcycle-themed events. The next stop was at Civilerghe di Mazzano, then Mantua and again Lendinara where the president of the Proloco Claudio Martello and the representatives of the municipal administration welcomed the Mita. Last stop in Argenta, in the company of friends of Motoclub 44011 and the Municipality of Argenta, with many typical specialties to savor, and then finally the finish line. Before concluding the first day, the visit of Giorgio “Matitaccia” Serra who presented the collection of illustrated books “Le Fiabe dei Motociclisti” to the staff and participants, the entire proceeds of which will be donated to the pediatric cancer wards. Also for this Milan-Taranto, Matitaccia donated the original work used as an image of the 2022 edition to the event. 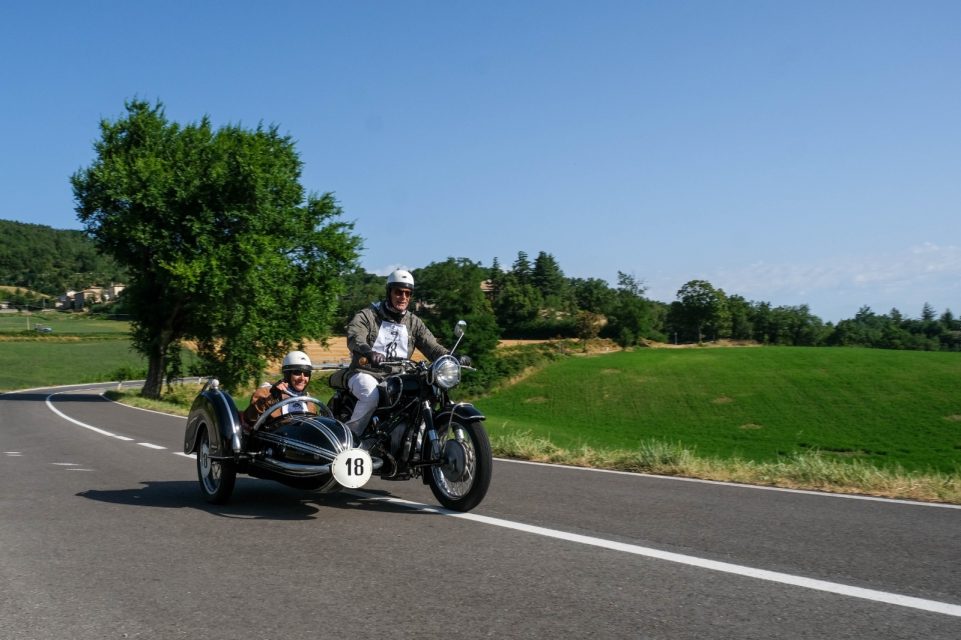 The second leg of the Milan-Taranto 2022 was in the name of the Central Apennines. As soon as the Tarantini left – this is the historic name of those taking part in the event – they faced the climb to the famous Passo della Futa, thus entering Tuscany up to Barberino di Mugello, to meet the “Svarvolati Mugellani” and in particular the president, Adriano Martinelli Fagiani. The municipal administration was also in Piazza Cavour with the mayor Giampiero Mongatti. At the second stop, in Dicomano, another crowded square was the backdrop to the buffet organized by the Municipality and “Il Corellino”. In Civitella in Val di Chiana there were representatives of the Municipality, Proloco and other friends of the event including Samuele Brezzi and Paolo Ciabini and the mayor Andrea Tavarnesi. Waiting for the Mita in Castiglione del Lago was Danilo Della Giovampaola who wisely coordinated the Umbri Regional Chefs Union, led by the president Gianna Fanfano and the Italian Federation of Chefs who proposed to those present delicacies such as cicerchia and “the caviar of the lake ”, The carp roe. Present the mayor Matteo Burico and the commissioner Elisa Bruni who did the honors of the house. Final stage in San Martino in Colle, “the home of the Milan-Taranto”, for a dutiful greeting to Patron Franco Sabatini, before arriving in Perugia. 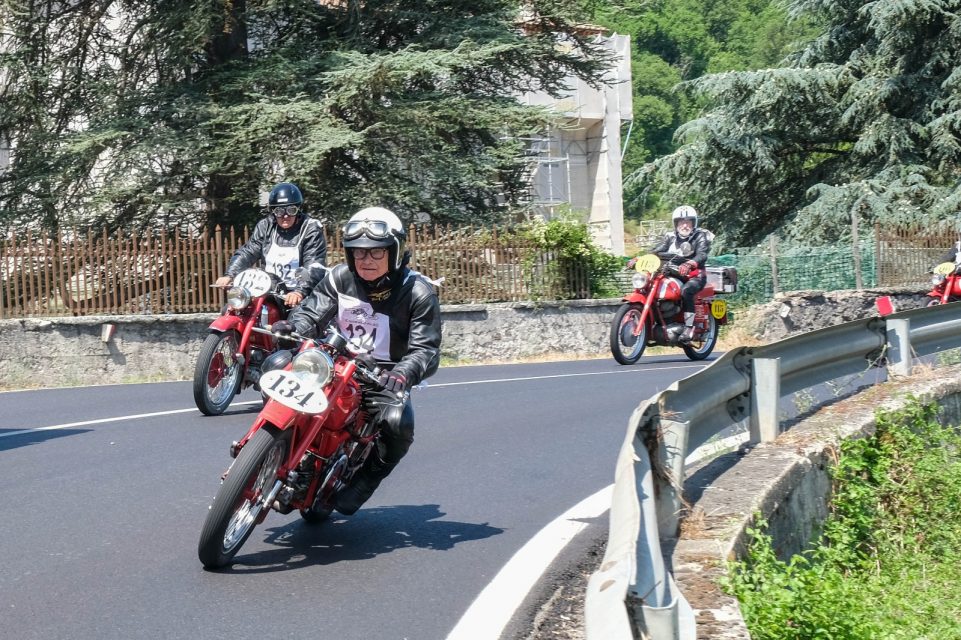 The third stage of the Milan-Taranto 2022 was again characterized by great heat and unforgettable views and places. Leaving Perugia, the crews and staff set off for Cassino. First stop in the small medieval town of Grutti, with the famous and delicious Christmas porchetta and the choreography of the Grutti Flag-wavers and Musicians Association. Present and proponent of the beautiful welcome were the president of the Per Grutti Association, Graziano Cerquiglini, and the president of the Sbandieratori e Musici di Grutti, Debora Trabalza as well as the mayor Enrico Valentini and the councilor for tourism Annalisa Alessandrini. Second stop in Montenero Sabino, a small favor of less than 300 inhabitants set in the Province of Rieti. Here to welcome the Mita were the mayor Lavinia De Cola with the deputy Elvisa Rossetti, the councilors Maurizio De Cola and Miriana Perilli and Stefano Graziosi, president of the Proloco di Montenero Sabino, with the members of the board busy preparing a tasty typical Sabine dish : the Fregnacce alla Sabinese. Another stop in Arcinazzo where, at almost 900 meters above sea level, the Stamp Control took place. Then Ferentino, welcomed by Massimo Datti, a historic friend of Mita who mobilized the entire Ferentino Moto Club, and also by the municipal administration, with the Mayor Antonio Pompeo, the councilor for tourism Angelica Schietroma and the councilor Giuseppe Virgili. Final stage in Piazza Alcide De Gasperi in Cassino among many local specialties such as cod in soup, croissant peppers, Atina green beans, canascioni with pecorino cheese and eggs, omelette Cassinese. Thanks to the Mayor Enzo Salera, the Councilor Concetta Tamburrini and the Vice President of the Moto Club Moto Mania Benito Mazzarella who were with us to continue the party that began today in the square during the evening. 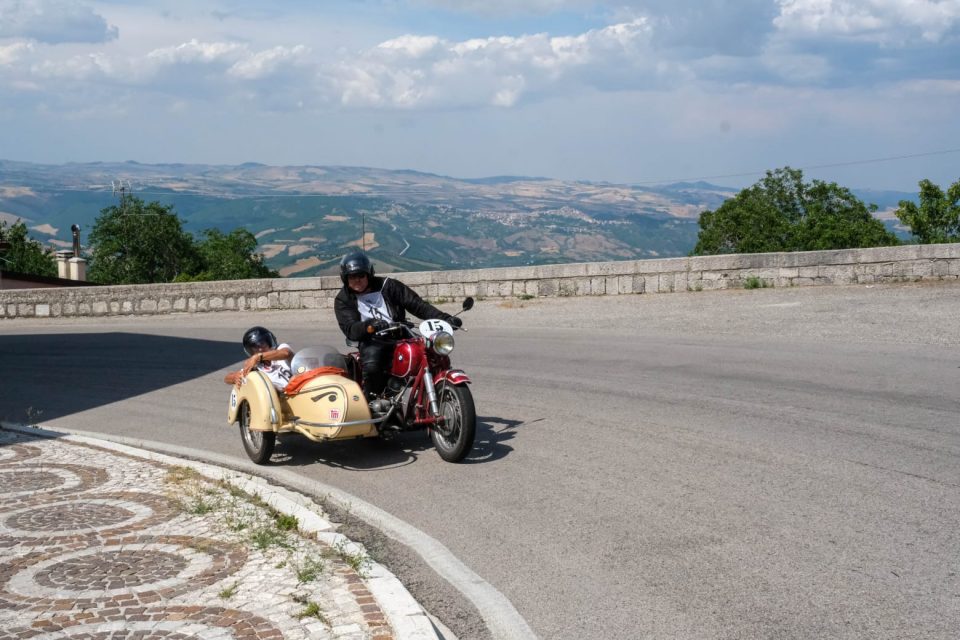 For the first stop of the fourth stage, the Milan-Taranto 2022 entrusted itself to the volcanic friend Giancarlo Valente who organized a nice and tasty welcome in Macchia d’Isernia at the Castle of the Conti di Ceglie Baroni family in Macchia Saracena. Also present were Maria Antonietta Mariani, president of Proloco Maccla, and the mayor Giovanni Martino. 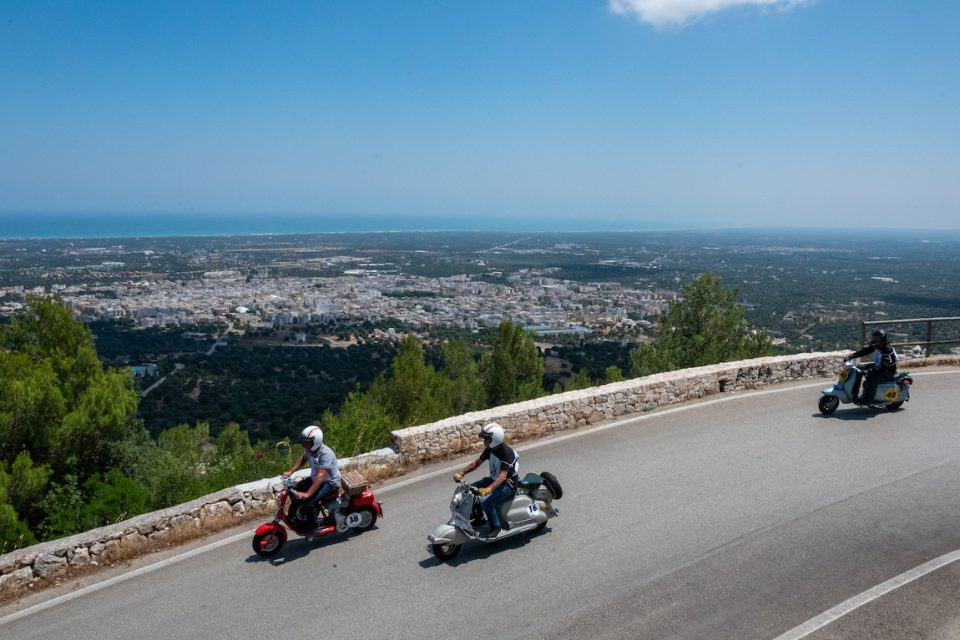 In Piedimonte Matese, the Antichi Sanniti Auto and Moto Club with the president Mauro Martino, the deputy Antonio Orsi and Annamaria La Penna and Raffaele Piazza were waiting for the Mita. Also present was the municipal administration and Coldiretti Caserta with representatives Giuseppe Miselli and Marcella Spinosa. The stand of Proloco Vallata Piedimonte Matese is also rich and very tasty: braid of buffalo mozzarella, fried torcinelli, Neapolitan pizza cooked at the moment, typical Neapolitan fried foods. 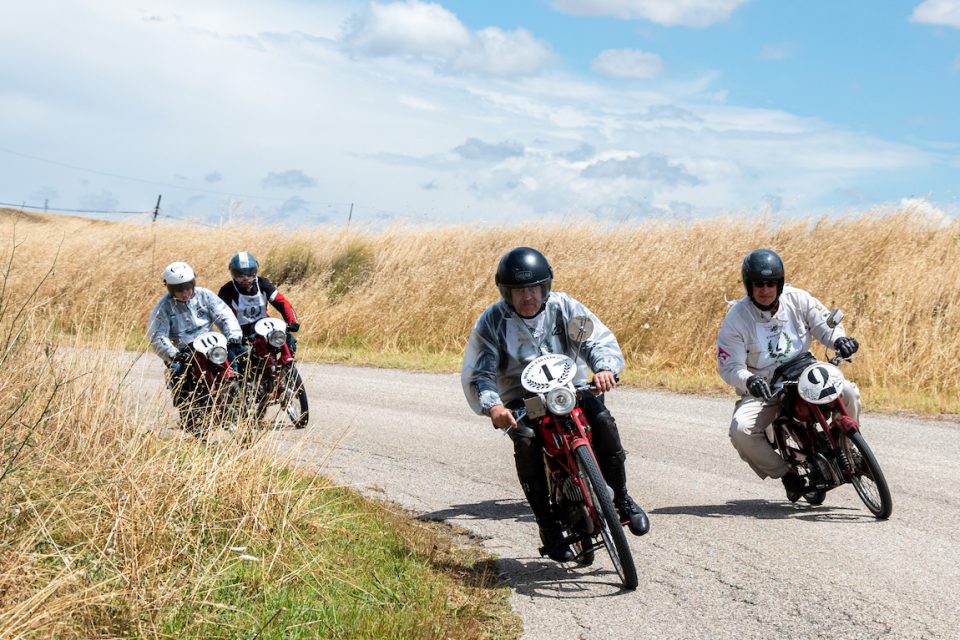 Third stop in Venticano with the Moto Club Venticano – among others present the president Luigi Villani – and also the mayor Luigi De Nisco. Here the participants were able to watch the preparation of the Caciocavallo Impiccato and then taste this delight. Restart for the climb to the “Cima Coppi”: the 1,135 meters of the Valico di Monte Carruozzo which put the smaller displacements to the test, but whose tenacity also prevailed on this test. Once I got off the mountains, the climb to the finish immediately began again which, even for the fourth stage, was in a square, Piazza Mario Pagano in Potenza, in the presence of the Lucania Motorcycle Motorcycle Club, representatives of the municipal administration and refreshed by the goodness of Piro pastry shop. 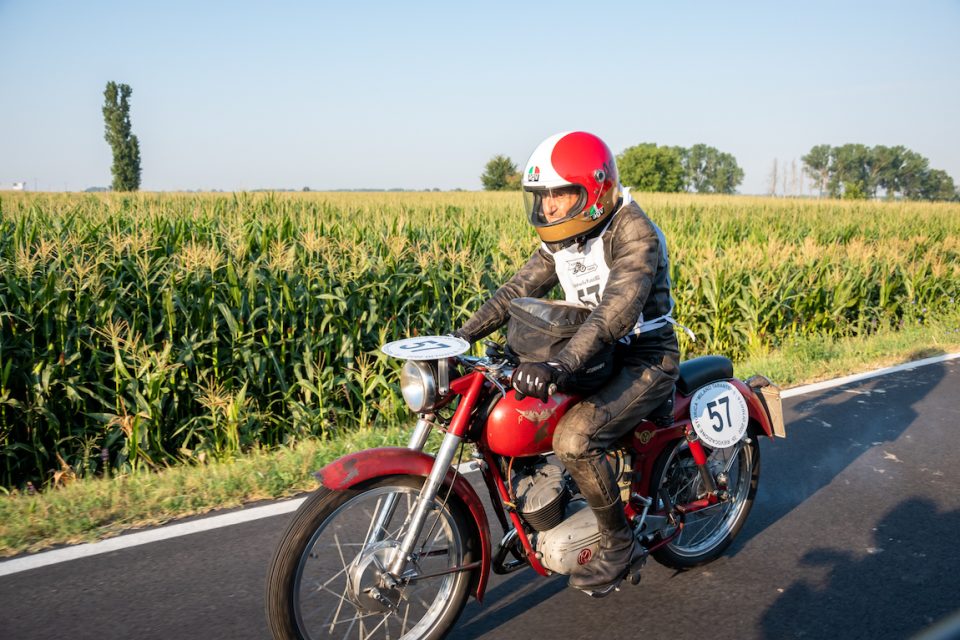 Opening the fifth stage of the Mita was the up and down the mountains of Basilicata up to the first Time Control of the day in Tricarico where Raffaele Dagnone and the Tricarico Bikers set up a nice welcome in Piazza Garibaldi, together with the president of the Civil Protection Antonio Mangiamele and to all the staff of the Proloco Tricarico and the Municipality of Tricarico. Here too a buffet with many local specialties: salami, soppressata, provolone, mozzarella, spicy homemade focaccia and the typical calzone of Tricarico 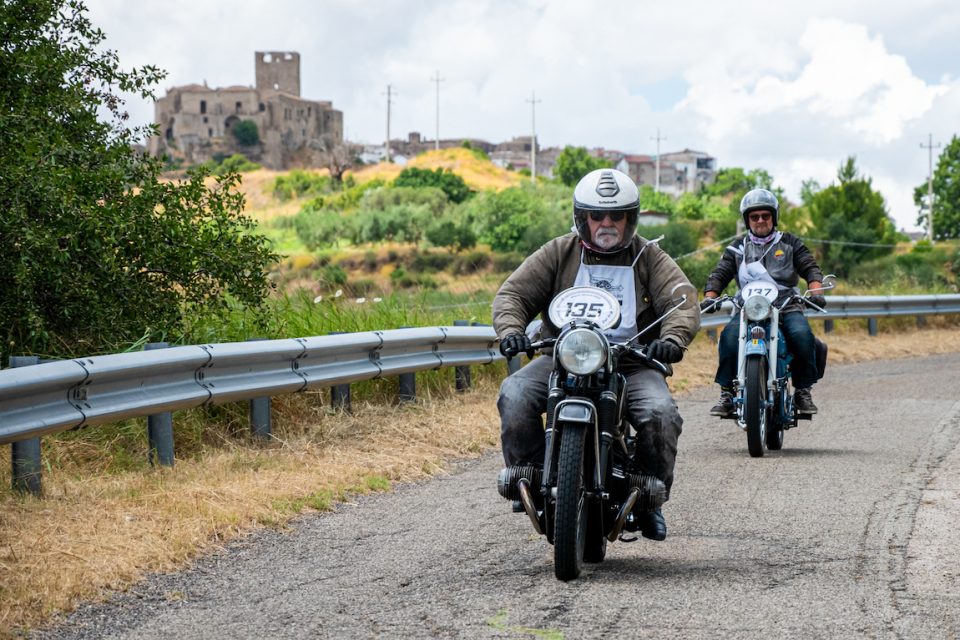 After climbing up to Miglionico for the Time Control which took place right in front of the majestic Malconsiglio Castle, the Tarantini started towards Gravina in Puglia, between seemingly endless roads and wonderful olive plantations. Upon arrival, the welcome is provided by Giuseppe Guglielmi, president of the Rombo Arcaico association, competing with his Perugina 175 from 1955. The location chosen by the association and the Municipality of Gravina was the wonderful Piazza Benedetto XIII where the refreshment was based on typical dishes from Gravina, from eggplant parmigiana to zucchini alla poverella, from the ball of gravina to the typical Apulian dish, rice, potatoes and mussels. Between rain and sun the journey to the next Stamp Control in Castel del Monte and also to the final finish line in Bari. 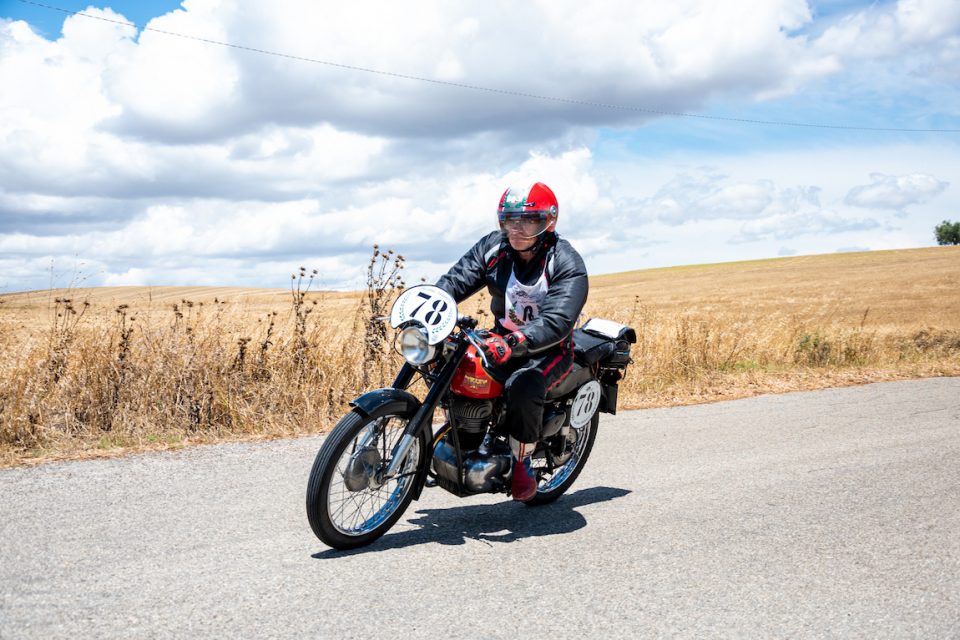 All Apulian, as per tradition, the sixth and last stage: the first 80 kilometers flew away in a flash, between dry stone walls, trulli and wonderful landscapes. First stop in the very green Selva di Fasano where Laura De Mola, president of the AS “Egnathia Fasano”, who coordinated the welcome with the help of the Municipal Police and who also brought greetings from the municipal administration, welcomed the Mita . A pleasant surprise was the meeting with the champion Vittorio Zito, driver of the historic Milan-Taranto in which he participated three times, even winning an edition. So there was the opportunity for a palmarès photo with Attilio Lucchi, son of the driver Vittorio who raced in 1951, and Michele Ronchei, son of the driver Antonio, “the eternal second” of the Milan-Taranto. The greedy moment, on the other hand, was based on very tasty panzerotti.

Another stop in Ostuni with the Vespa Club Ostuni: present the president Giovanni Totero, Luca Blasi and all the staff. The location chosen is breathtaking, between the sea, the olive trees and the Saracen Walls. At Villa Castelli then the Tarantini greeted, once again this year, the municipal administration and the many local friends, first of all Vito Ciracì, who accompanied the caravan of vintage motorcycles in the last kilometers of the marathon with his Guzzi Albatros number 217. 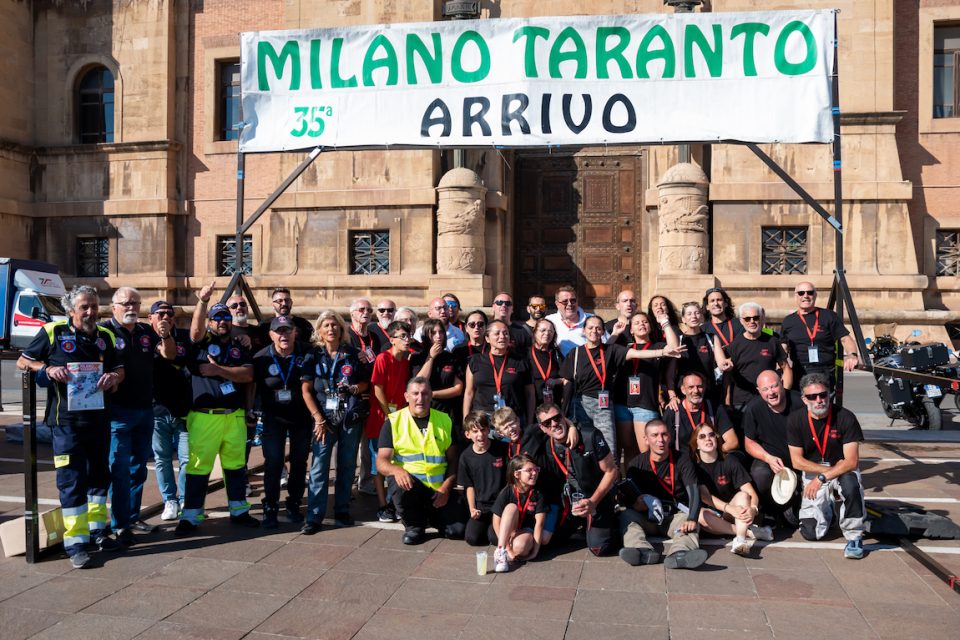 After the zig-zag through the streets of Taranto, the participants of the Mita 2022 finally crossed the finish line beyond which the last unexpected surprise awaited them: a great welcome party as it had not happened for many years and which allowed to sharing with many people the joy of having reached the end of these 1,750 tiring, intense and unforgettable kilometers. Here the greetings and thanks to the sports body Opes Italia Puglia Regional Coordination represented by Francesca Gatto and Massimo Donadei, and to the boys and girls of the Lambretta Club Taranto who have thought of a refreshment based on watermelon, fresh water, focaccia and a lot of sympathy . Also present were the mayor Rinaldo Melucci, the deputy Fabrizio Manzulli and Gianni Azzaro, councilor for sport.

The party lasted for a good part of the afternoon with congratulations, hugs, ritual photos and a lot of joy for the 170 participants who completed the 1,750 km of the route, among scenic and suggestive roads, to discover natural beauties, villages, traditions, culture and gastronomy.