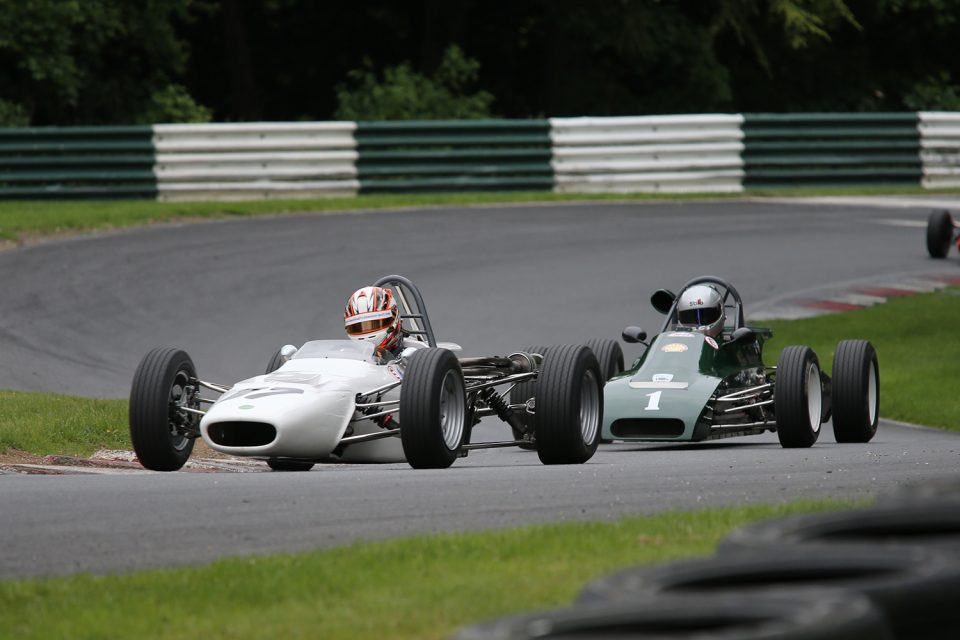 The annual visit to Cadwell Park by the Historic Sports Car Club coincided with the Platinum Jubilee (4/5 June) and some traditional grim British Bank Holiday weather. It was Tom McArthur who best mastered the conditions to win two Formula Ford races in Sunday’s rain.

Despite Sunday’s terrible conditions, the full programme was completed safely thanks to the dedication of the marshalling team and the co-operation of all the competitors. 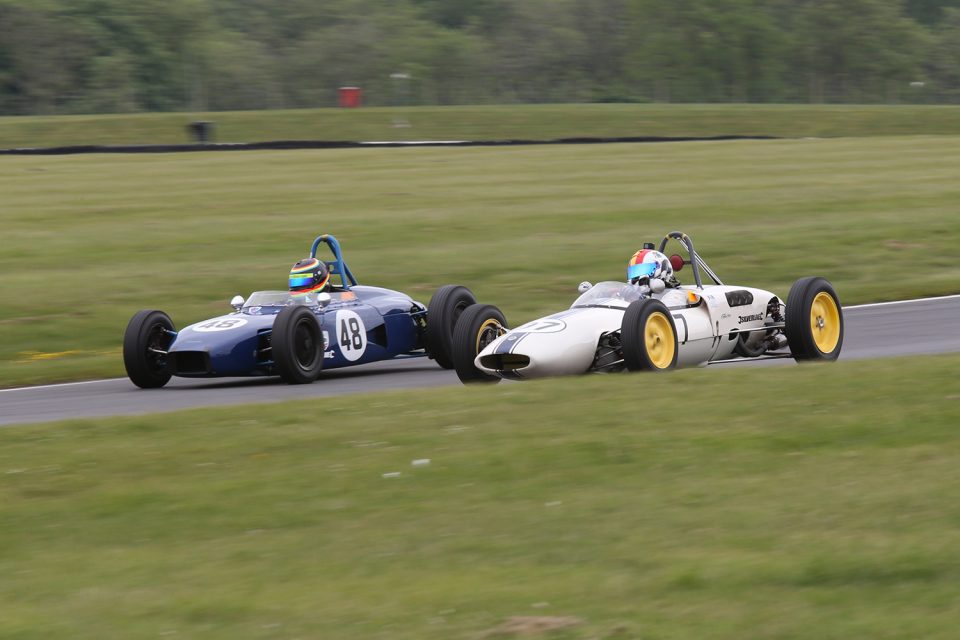 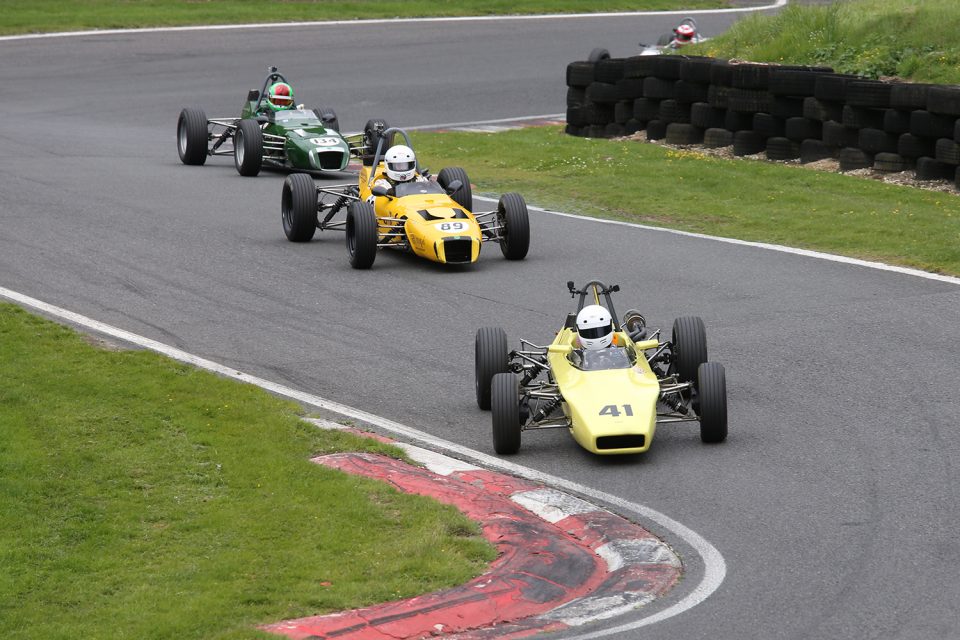 The two HFF2000 races were decided by a total margin of little more than half a second as Fennymore and Benn Simms battled furiously. After some wheel-to-wheel action Fennymore just got the nod on both days to bring the season tally to five wins for Simms and three wins for Fennymore. 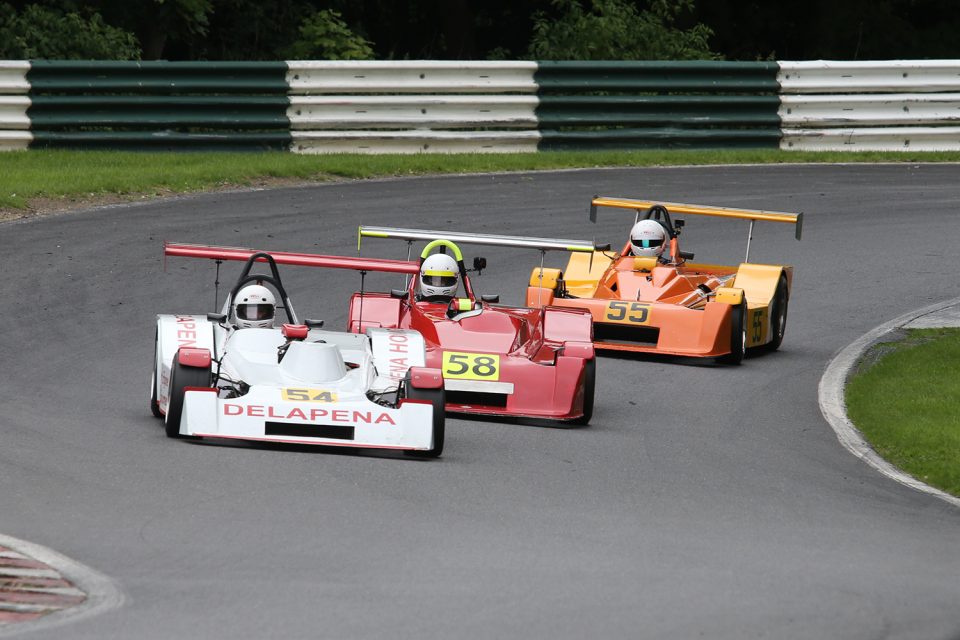 On Saturday, young Ben Glasswell drove a strong race to take third and was never too far back from the leading duo while staying well clear of Lee Bankhurst’s Royale RP30. On Sunday Bankhurst moved up to complete the podium ahead of the ever- improving Ollie Roberts. 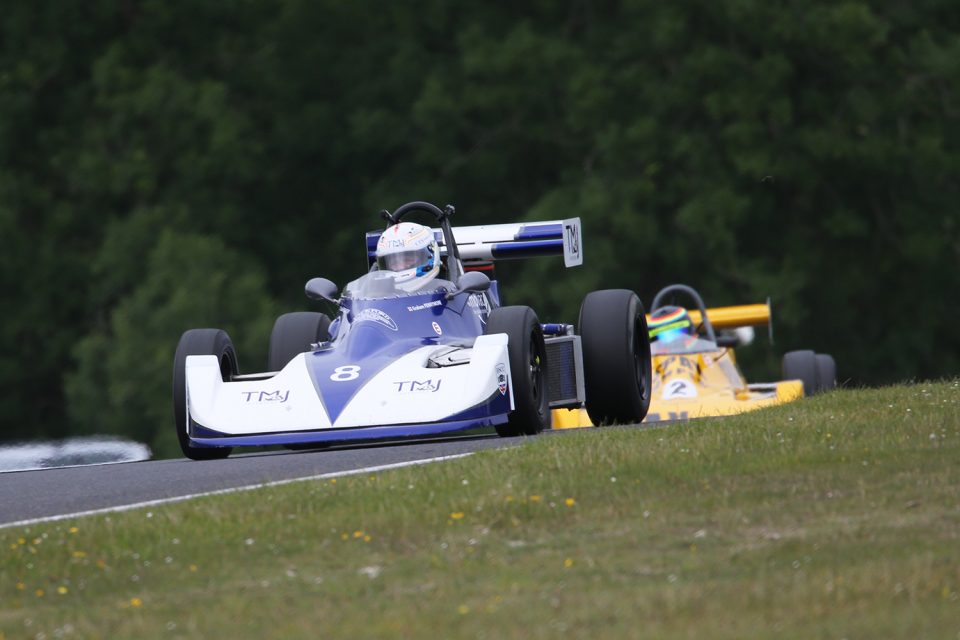 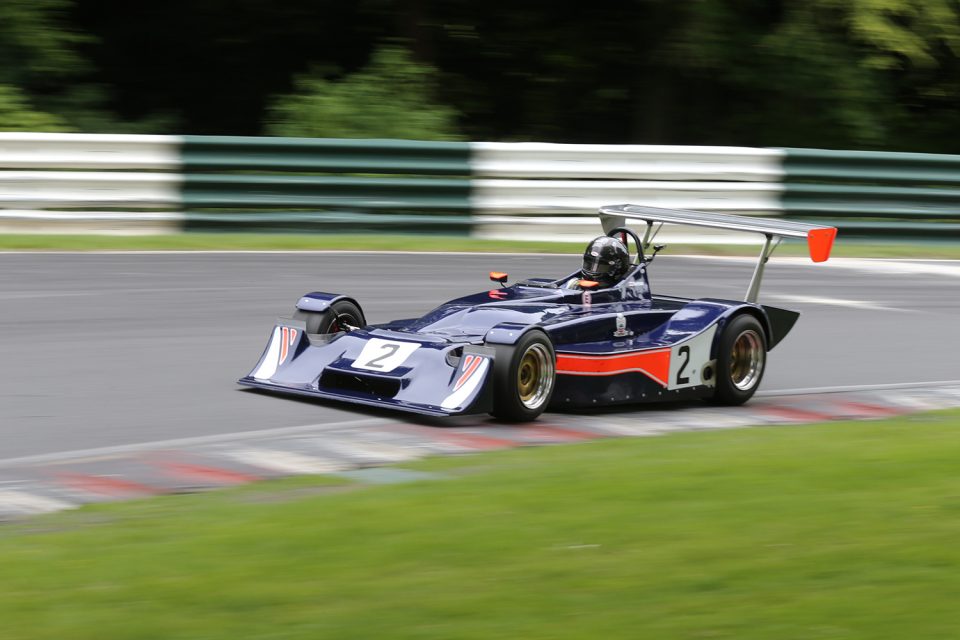 Historic Formula Ford 1600 victories were shared between Samuel Harrison and Tom McArthur. On Saturday, they battled mightily until McArthur’s Titan speared off at the Mountain and rattled along the barriers, smashing a brake disc in the process. That left Harrison well clear of Danny Stanzl, who hurled his Elden Mk8 around in acrobatic style over the twists, turns and brows of Cadwell. Relative newcomer Oliver Chapman was a strong third after fending off over 50s winner Rob Smith. 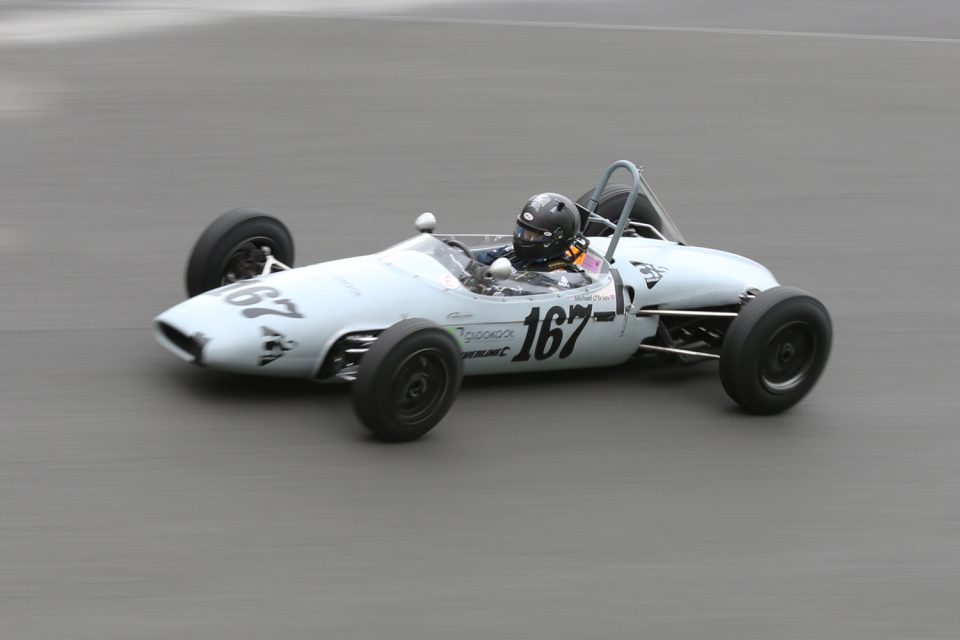 On Sunday McArthur was at the back of the grid but mastered the conditions to battle up the order and headed Samuel Harrison by three seconds at the flag, with Chapman completing the podium. McArthur also took Sunday’s win in Classic Formula Ford 1600 but on Saturday had been convincingly out-paced by Jordan Harrison in his Lola T540E. In Sunday’s rain, McArthur got the Merlyn ahead, but was only a third of a second clear at the flag as Jordan Harrison mounted a sterling challenge. 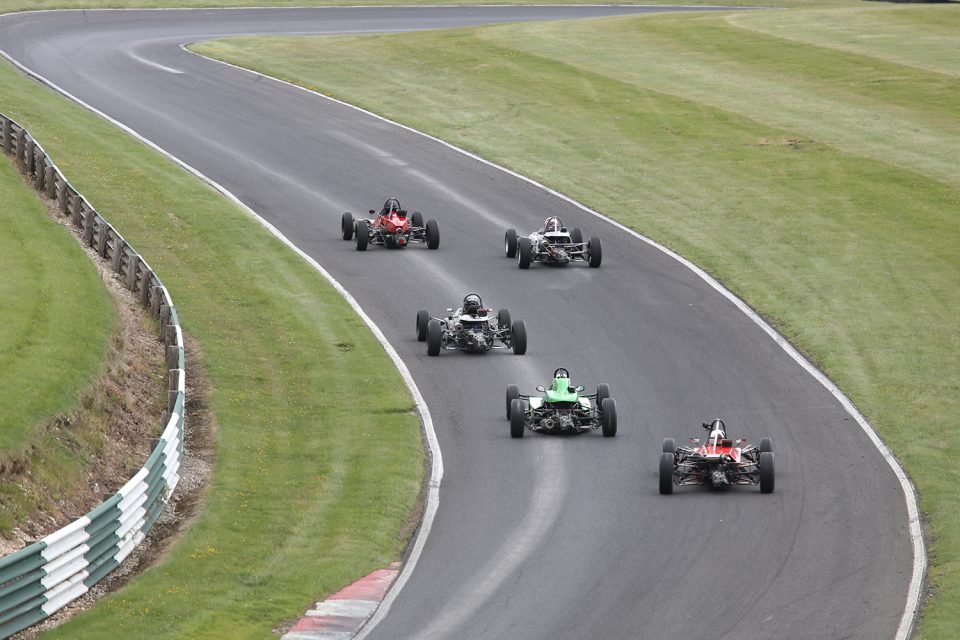 Michael O’Brien, as expected, was the class of the Formula Junior field and won both races at a canter in his Brabham BT6 as Benn Simms lead the chase in the drum-braked Caravalle Mk2 of Jim Blockley. The story was much the same on Sunday when the remaining runners were combined into one grid. Nic Carlton-Smith headed the earlier cars with his Kieft in Saturday’s race, and then rounded out the overall podium on Sunday behind O’Brien and Simms. 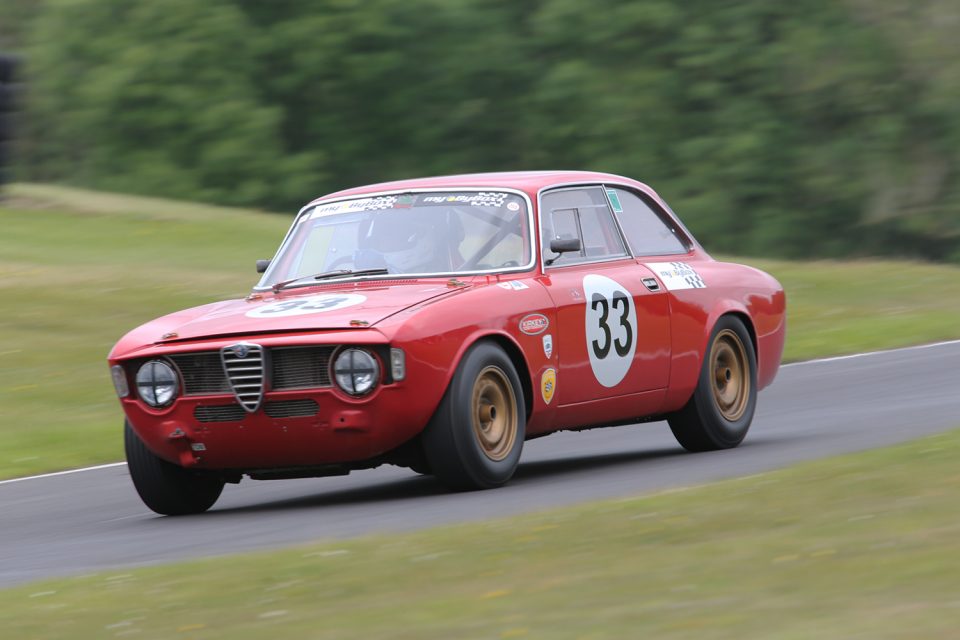 A strong 70s Road Sports grid delivered two good races and on Saturday it was Julian Barter who fended off the challenge of Jeremy Clark to win in his first race of the season in his TVR 3000M. Julian’s father Charles was back in third where he held off the Lotus Europa of Paul Tooms. However, on Sunday, it was Tooms who took control in the rain and fended off Barter Sr by seven seconds, with Julian back in third in the TVR in a fine battle with Adam Bagnall (Jaguar E-type) and Clark (Lotus Elan). 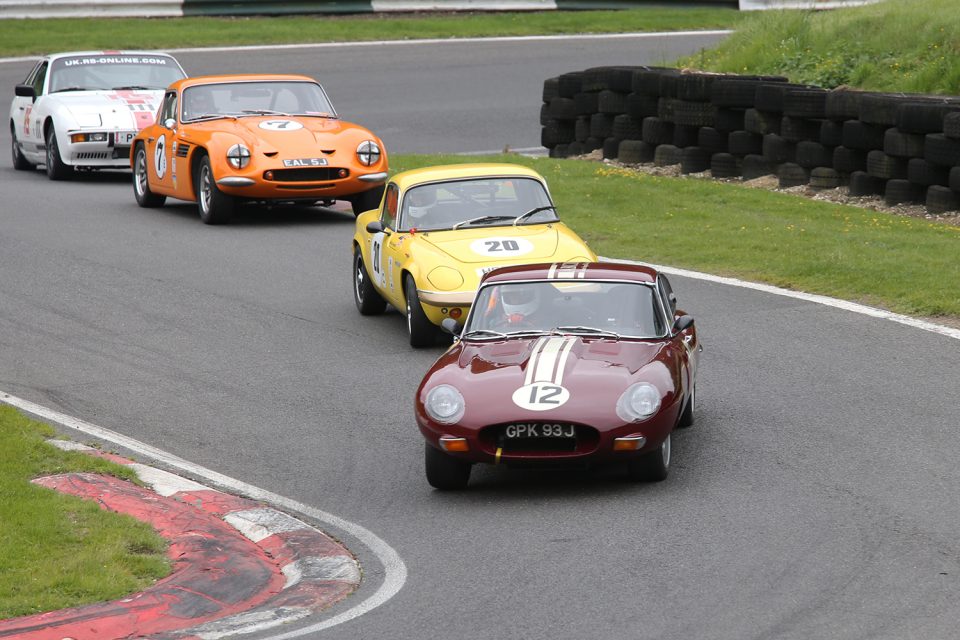 The Classic Clubmans field produced another Harrison win on Saturday, the third for the name as John Harrison held off a determined challenge from Alan Cook to take the spoils, while young Tom Muirhead drove well in the Formula Ford engined class to head Adam Patterson and Barry Webb. The second Clubmans race on Sunday was eventually dropped as a number of the drivers elected not to race in the difficult conditions. 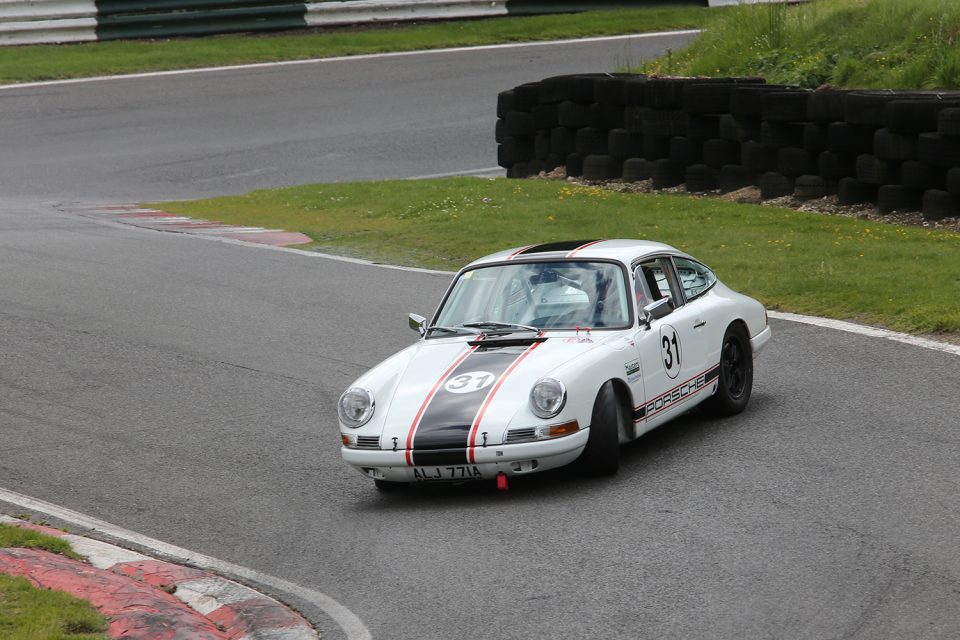 When Kevin Kivlochan slid his AC Cobra into the tyre wall at the hairpin in Historic Road Sports qualifying, he left the way open for John Shaw to take a commanding double win in his Morgan +8. In the dry, Jonathan Stringer’s Lotus Seven was a constant threat as the gap ebbed and flowed in traffic, while on Sunday it was Mark Godfrey who led the chase of the impressive Shaw in his Ginetta G4. 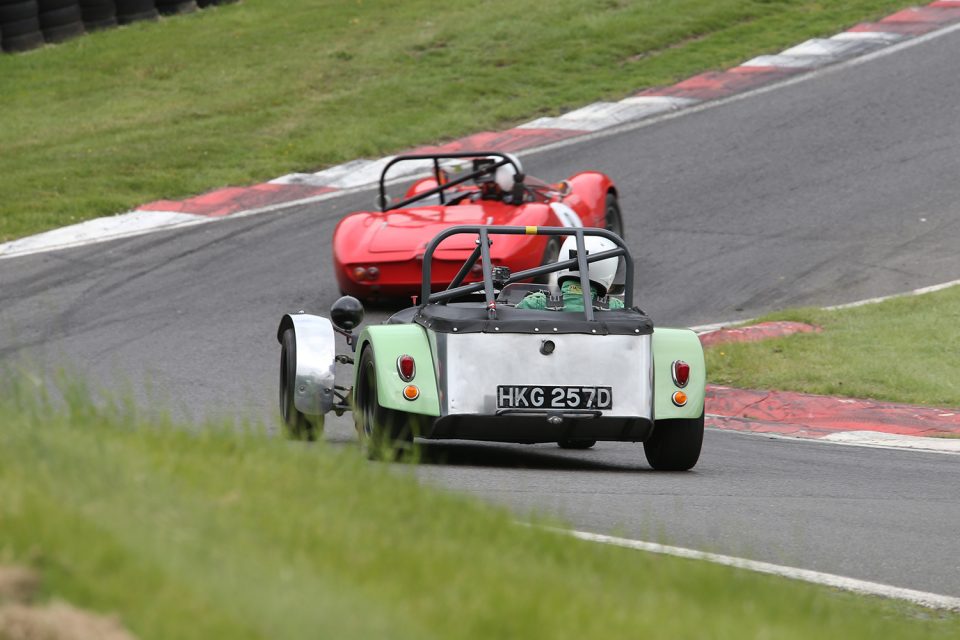 Sharing a grid each day were the Historic Touring Cars and the first pilot race for the HSCC’s new Historic Modsports and Saloons category. On Sunday morning, the three Modsports and Saloons moved to the front of the field as Myles Castaldini scored an emphatic win in his Davrian Mk8 from Steve Watton’s Turner and the Ford Escort of Ronnie Haines. Dan Cox, who was standing in for Jimmy Fuller, was best of the Historic Touring Car pack in Fuller’s Alfa Romeo Giulia Sprint. 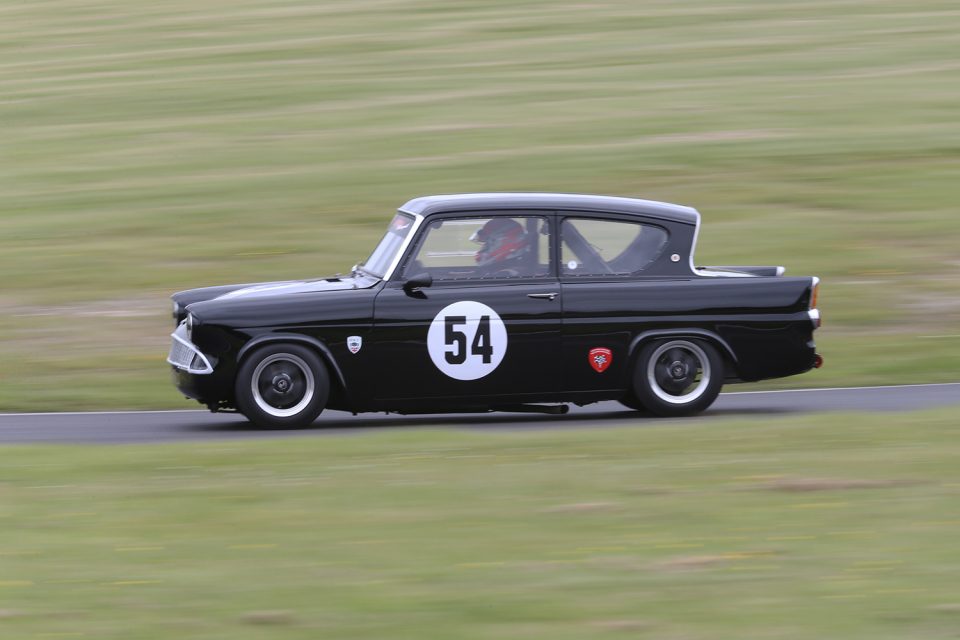 The story was similar later on Sunday in the second race as Castaldini won well with Watton second, while the best of the Touring Cars was the BMW 1800 Ti of young Harry Barton. Finally, two guest races up for the Northern Saloon and Sportscar Championship delivered two wins for the Subaru Impreza of Chris Huntley. 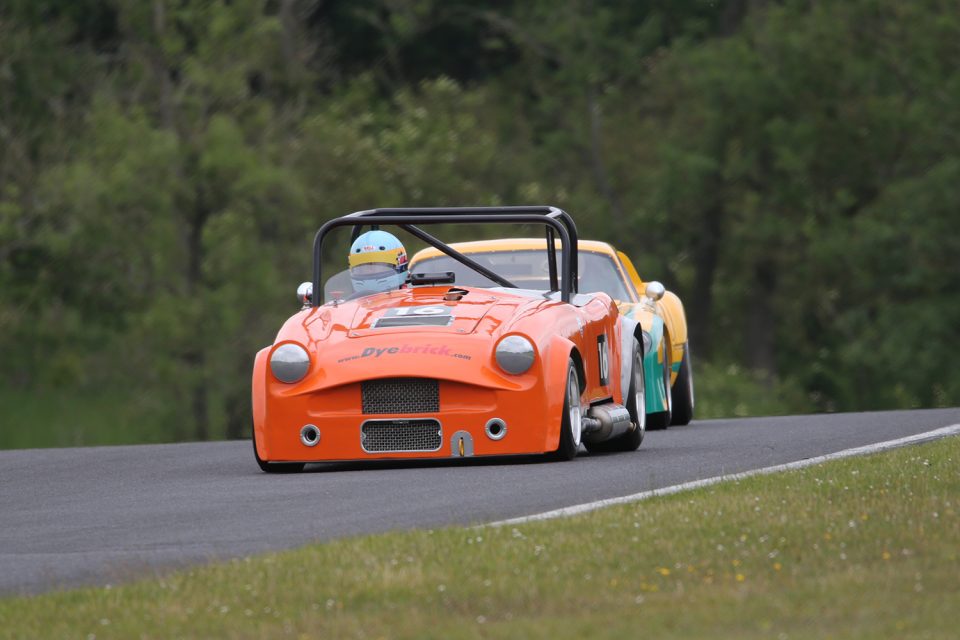 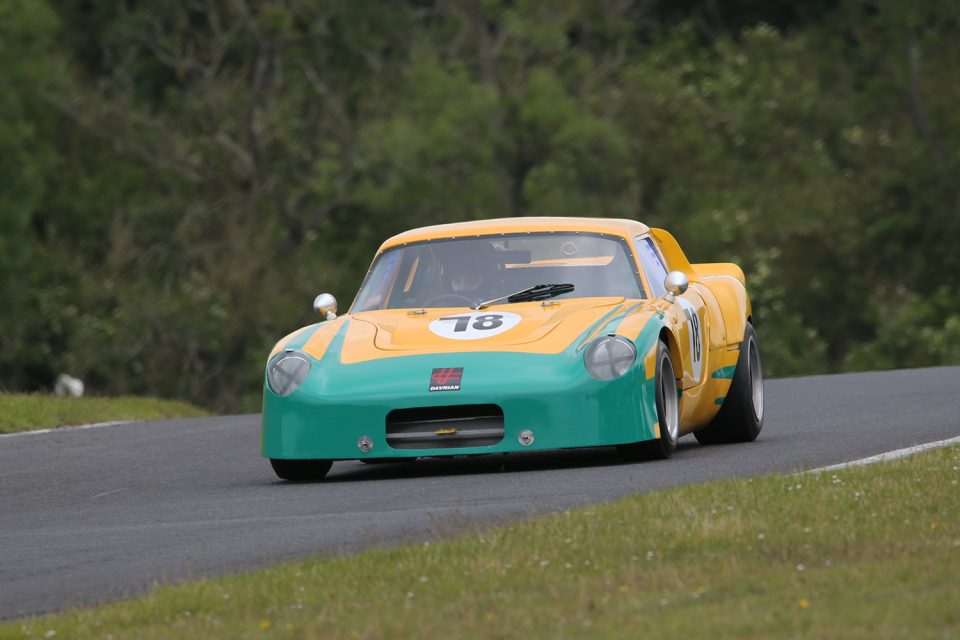 This year’s weekend of historic racing on the fabulous Lincolnshire circuit coincided with the Platinum Jubilee celebrations for the Queen’s 70 years of service to the people of the United Kingdom and the Commonwealth.

To mark this very special occasion, three awards were presented across the weekend. The HSCC Jubilee Cup for the ‘spirit of the weekend’ went to Historic Formula Ford 2000 racer Jen Ridgway. Despite the conditions, she raced on the tail of her racing idol Adrian Reynard on Saturday before a minor moment cost her 10 seconds to the man who founded the Reynard racing car dynasty.

The Queen Elizabeth Cup for the drive of the weekend was judged by circuit commentators Ian Titchmarsh and Marcus Pye and was presented to Benn Simms, who contested four races in Formula Ford 2000 and Formula Junior. He battled mightily with Graham Fennymore in FF2000 with his Reynard and took the fight to Michael O’Brien in Formula Junior in the drum-braked Caravelle Mk2 owed by Jim Blockley. 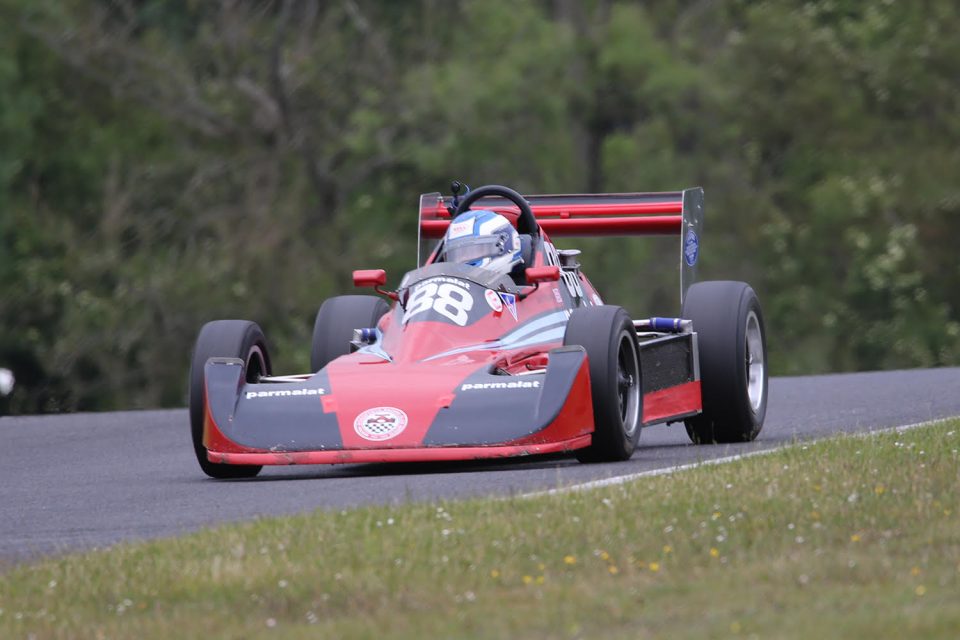 The Platinum Cup for the best presented car of the weekend, as judged by the HSCC’s team of scrutineers, was awarded to Porsche 911 racer Andrew Walton in Historic Road Sports. Walton worked tirelessly to build the 911 into a race car from a bare shell during Covid lockdown.

Andy Dee-Crowne, CEO of the HSCC, said: “I’d like to offer my congratulations to Jen, Andrew and Benn for being deserving winners of these special awards. Of course, after the challenging weather we faced on Sunday, all of our marshals and competitors deserve an award for their efforts in ensuring the event went ahead!”

Our Website uses cookies to improve your experience. Please visit our HSCC ad Cadwell Crowns Jubilee Winners page for more information about cookies and how we use them.