Only a few hours to go to the 35th Milan-Taranto!

The historic re-enactment for Moto d’epoch is almost at the end of the countdown to midnight on Sunday!

In fact, it is precisely at midnight, in the evening between Sunday 3 and Monday 4 July, that the now inevitable appointment with the re-enactment of the historic Competition will start, which was held until the mid-1950s and which, since 1987, has it was brought back to life by Franco Sabatini and now inherited by his daughters Lina, Natalina and Claudia, as a motorbike-tourist event reserved for classic vehicles and, for this reason, with an unattainable charm.

Competitors, divided into displacements and types (motorcycles, scooters and sidecars), will have to cross 1750 kilometers and countless stops carefully selected by the Organization in 6 days.

In fact, we start from the new location of the Novegro Exhibition Park and after about fifty kilometers in the middle of the night we arrive first in Crema and then in Ciliverghe di Mazzano (BS). A quick Stamp Check at the first light of dawn in the beautiful Mantua to then reach Lendinara (RO). With 335 km “on wheels” already, last stop of the day in Argenta (FE) and then finish at the arrival of the stage in Villanova di Castenaso (BO) for a well-deserved rest! A very intense and undoubtedly fascinating, tough stage that will test the Participants, not just the “veterans” such as Arcangelo Betti, born in 1938; but also the “new generation” such as Domenico Simonato who is from 2007 and Michele Cavazzini, who is one year older and riding together with the whole Cavazzini family, including Mrs. Silvana who, a passenger in the sidecar led by her son Fulvio, will face a another MITA at the remarkable age of ninety! 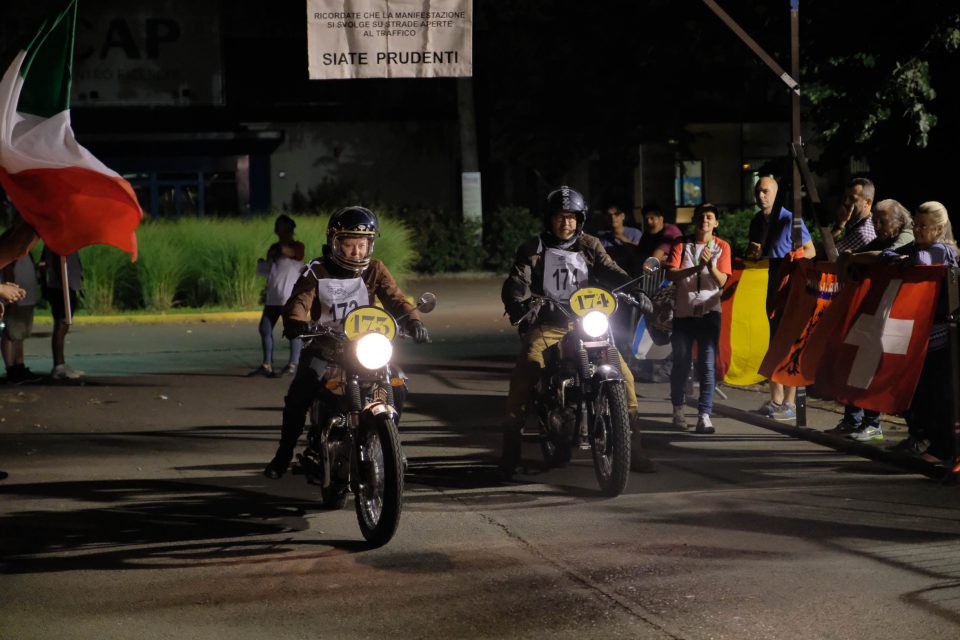 The second stage which will see the MITA multilingual caravan (111 Italians and 93 foreigners) cross the Apennines from Bologna to Perugia with stops for the Controls that will rank the “more regular” competitors in Barberino is very fascinating. of Mugello (FI), Dicomano (FI), Civitella in Val di Chiana (AR) and Castiglione del Lago (PG) and a significant Stamp Control right at the “home” of the Milan-Taranto in San Martino in Colle (PG). Arrival in Perugia in the late afternoon also for the many “pilotesses” who, not at all frightened by the kilometers and with the comforts of the time, have nothing to envy to their male colleagues: Carla, Chiara, Katrin, Maria Rosaria, Claudia have class and determination to sell!

Wednesday 6 July third stage still above 300 km, a great challenge for bikes that are on average 60/70 years old but also reach almost 100 like the Moto Guzzi Sport 13 of 1927 and GT16 of 1931 or the two Indian Scout 101 of 1928 which will be regularly at the start. The stops of the day are divided between Umbria and Lazio, with Grutti (PG), Montenero Sabino (RI) and Ferentino (FR) interspersed with a stamp control at the Arcinazzo plateaus. Finish line in the suggestive Cassino (FR). 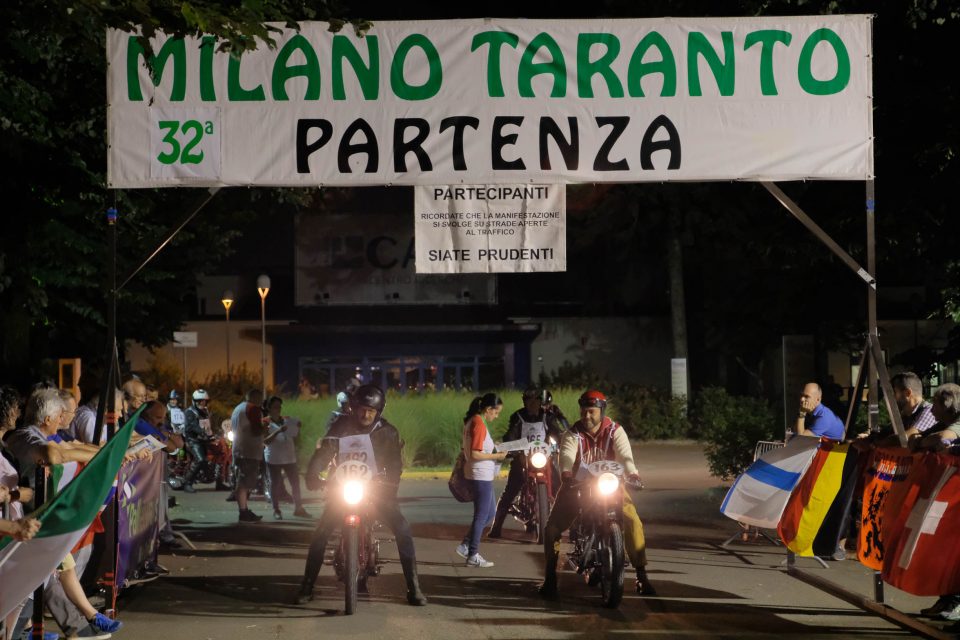 With the fourth stage begins the second half of # MITA22 and our “Tarantini” (so the pilots who faced the Historical Competition were called) will face a day full of up-and-down the mountains: Macchia d’Isernia ( IS), Piedimonte Matese (CE), Venticano (AV)… Places of the beautiful country to be discovered until reaching the finish line at the end of the stage in Potenza, after a “fresh” Stamp Control at 1135 meters. Del Valico di Monte Carruozzo which will reassure the 204 Participants who have been preparing and organizing for the Adventure for months. In fact, there are many clubs that participate in groups, the largest Italian Motoclub is the Vespa Club of Milan with 6 participants, the largest foreigner is the Falcone-Club Deutschland with 10 and then there are groups of English “Lambrettists” who each year are present en masse! Also noteworthy are two Participants from the USA. 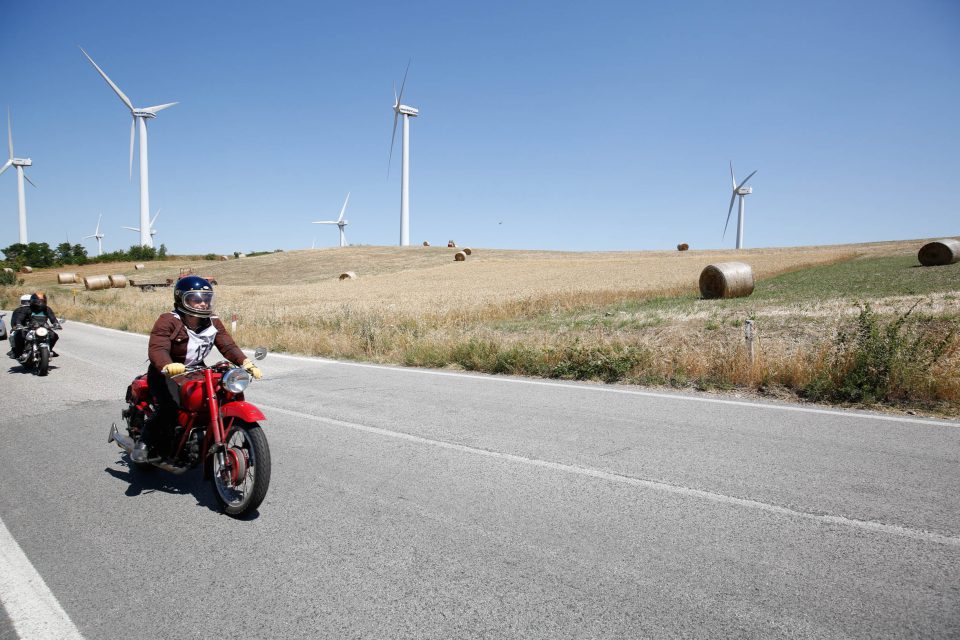 Fifth stage that on Friday 8 July will see the Milan-Taranto enter the beloved Puglia through other places that will be discovered and tasted! In fact, one of the characteristics of the event is the preparation of a very aggressive Final Ranking of the best stops, in which the various Administrations, Bodies, Associations and Motoclubs compete each year for the “Best Refreshment” award. Therefore, today’s stops in Tricarico (MT), Miglionico (MT), Gravina in Puglia (BA) will also be judged. To highlight the evocative Stamp Control in the unmistakable setting of Castel del Monte before the final arrival in Bari.

Last stage relatively short but which will touch very significant places such as Selva di Fasano (BR), a place known to motorcyclists for a famous race immediately after the war. But also Ostuni (BR) and the traditional Villa Castelli, before arriving right where the historic Milan-Taranto ended: the Lungomare Vittorio Emanuele III in Taranto.

In short, the elements for a memorable adventure are really all there: an adventure that can also be experienced from home, following the site https://www.milanotaranto.com and the Facebook accounts https://www.facebook.com/MilanoTaranto and Instagram https://www.instagram.com/milano_taranto/ of the event, always updated with stories, images and videos.

The complete route with all the places and times can be found here: https://www.milanotaranto.com/2022/06/percorso-2022-gli-orari-dei-passaggi/

Our Website uses cookies to improve your experience. Please visit our Only a few hours to go to the 35th Milan-Taranto! page for more information about cookies and how we use them.