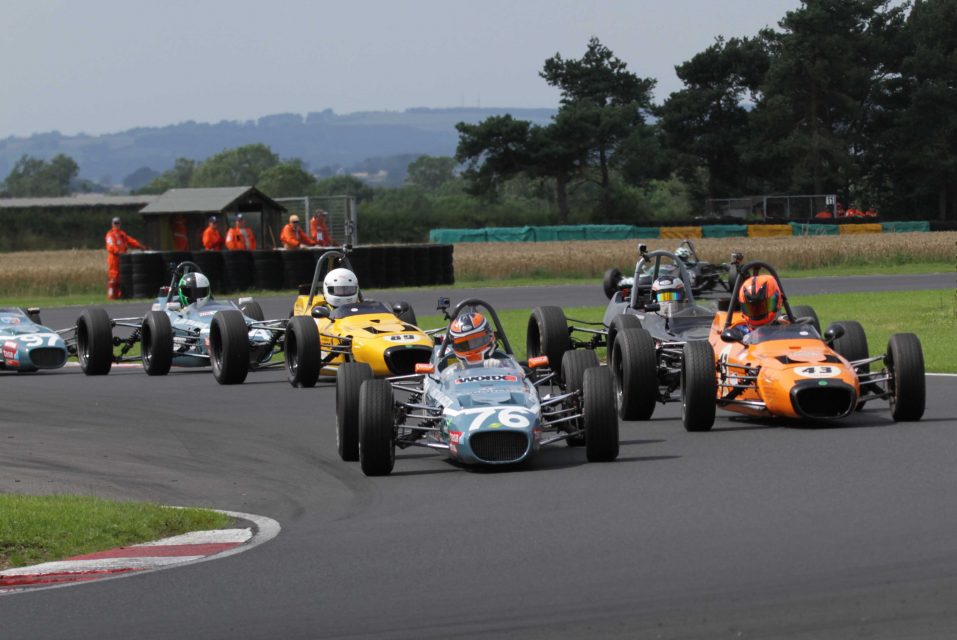 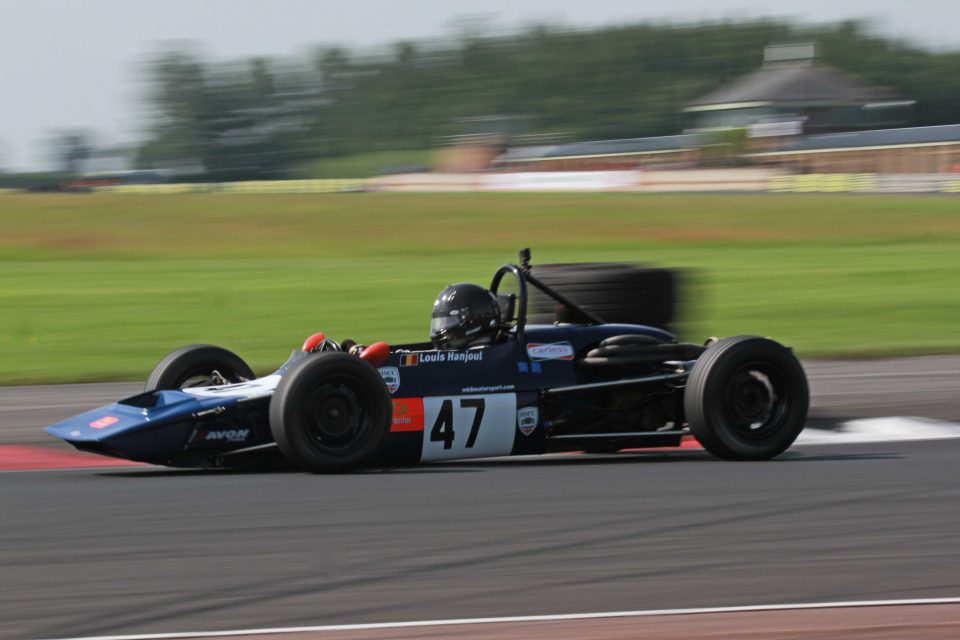 The Historic Sports Car Club’s season continued at the Croft circuit in North Yorkshire over the weekend (3/4 August) as nine of the Club’s categories provided some entertaining racing during the annual Retro and Classic Weekend.

2019 champion Andrew Park (Reynard SF81) won the first Formula Ford 2000 race from a bumper grid, though the race was shortened due to a red flag when Graham Ridgway’s Reynard tangled with Andrew Smith’s Royale. Benn Simms snatched the lead on the restart in his Reynard SF77 but was quickly reeled in by Park and second-placed Ian Pearson in his Royale RP30.

Park won again on Sunday, although his car was trailing smoke. However, both Pearson and Simms dropped out from second place, leaving Paul Allen’s Reynard SF79 to try and catch the ailing Park. The similar car of Jason Redding was third.

Jonathan Hughes was the winner of the first Historic Formula 3 race, running in conjunction with an invitation class for Classic Racing Cars. Hughes qualified quickest in his orange Merlyn Mk14A and was only seriously challenged when a mystery loss of power dropped him to second just after half-distance. Championship leader Simon Armer briefly led in his March 703 but had to settle for second ahead of Leif Bosson’s immaculate Brabham BT28.

Hughes dominated the second race too but Armer was not so lucky. He had passed Bosson for second after dicing for several laps, but had to retire a while later with mechanical problems. Bosson held on to second in front of Steve Seaman (Brabham). 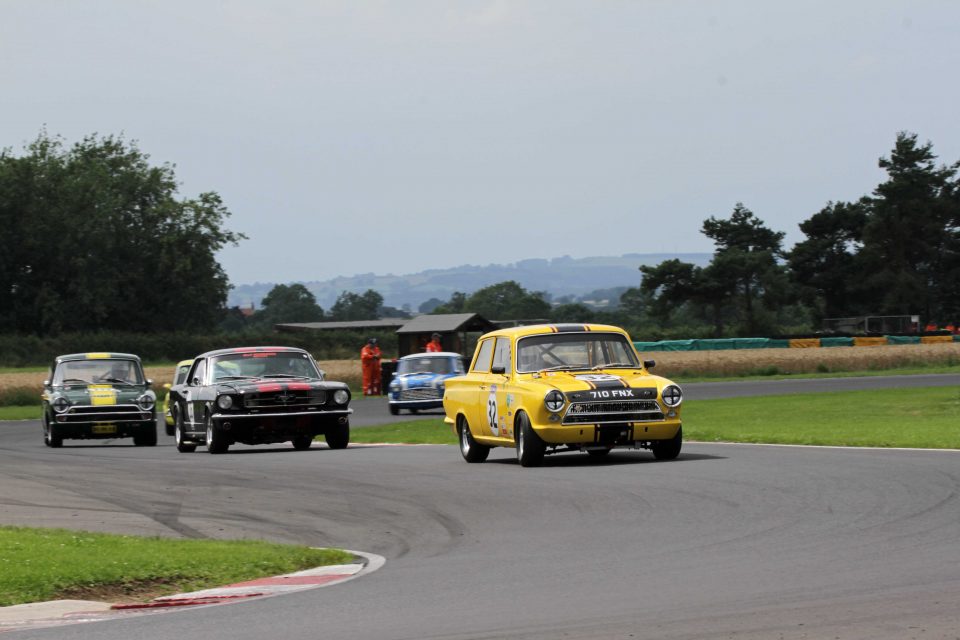 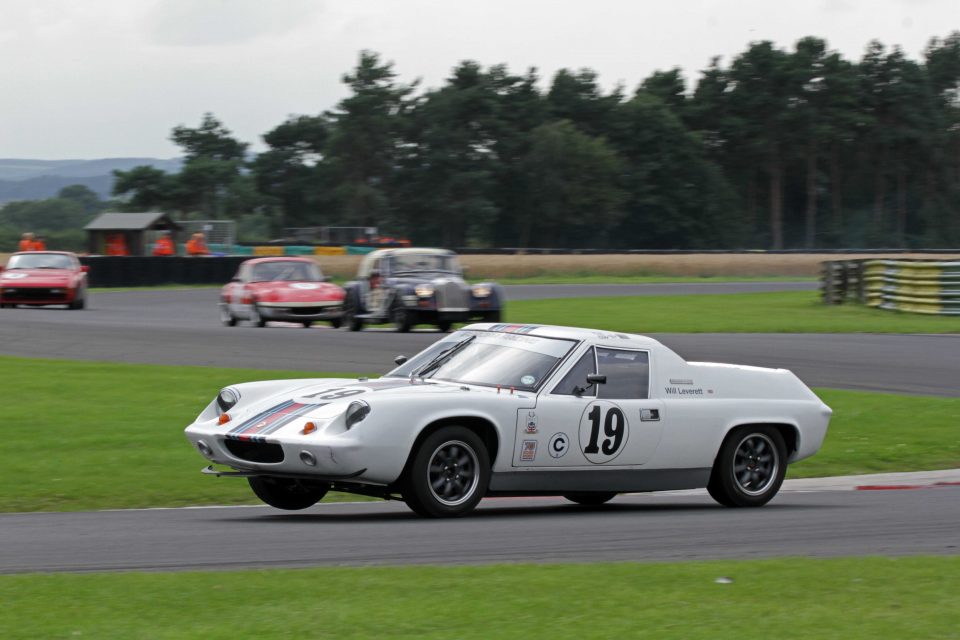 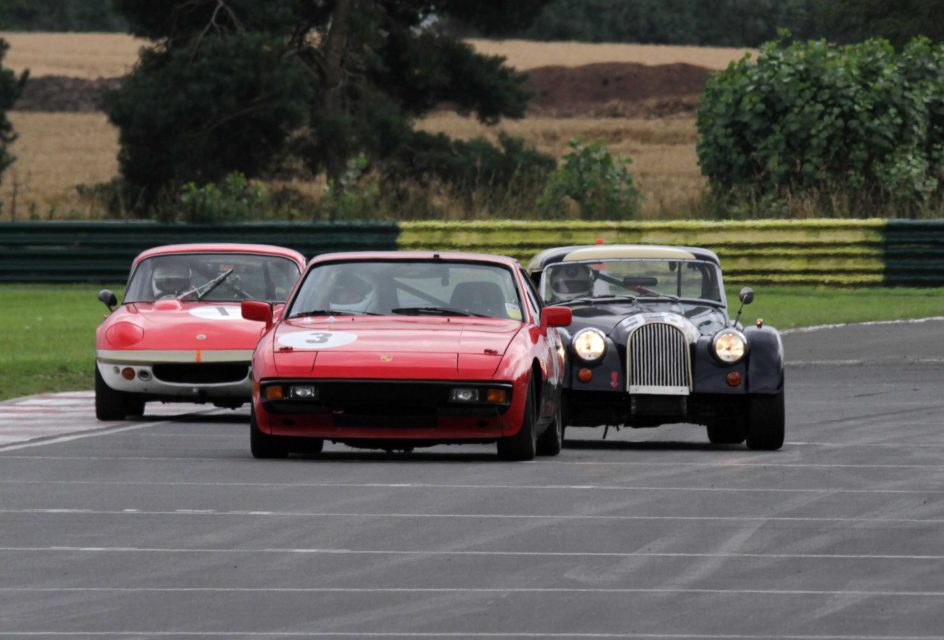 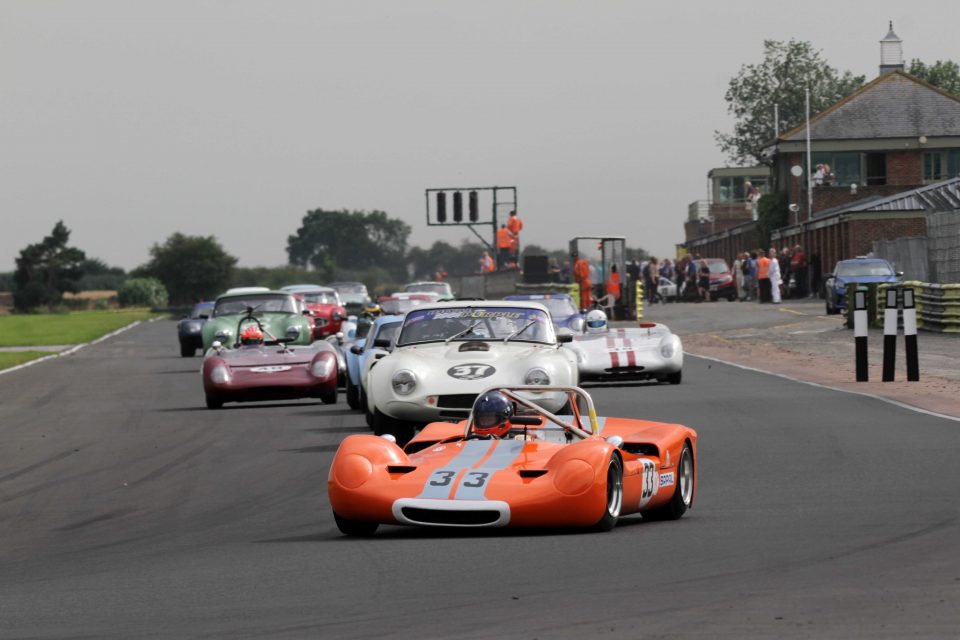 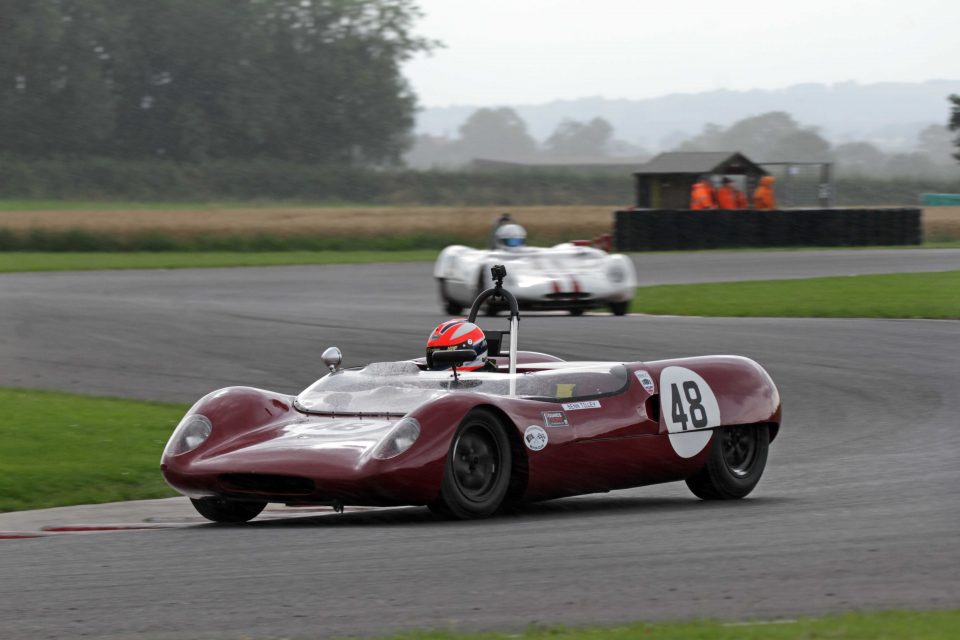 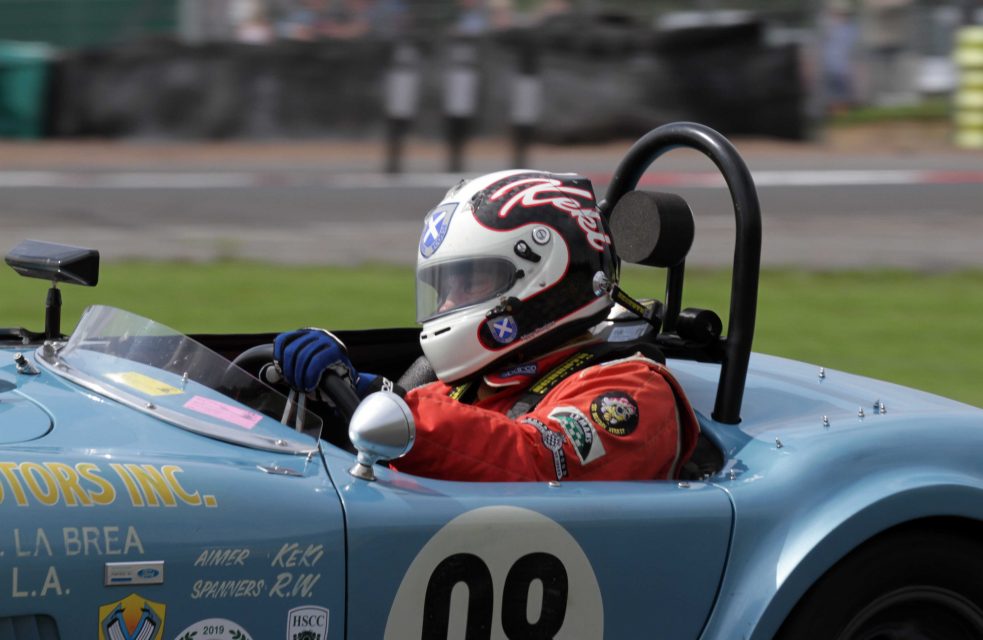 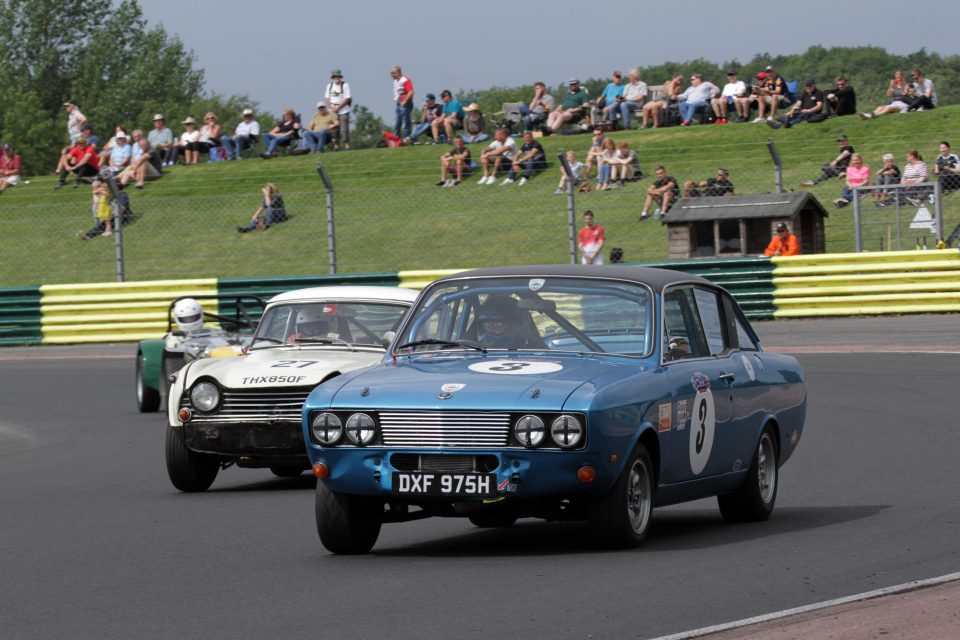 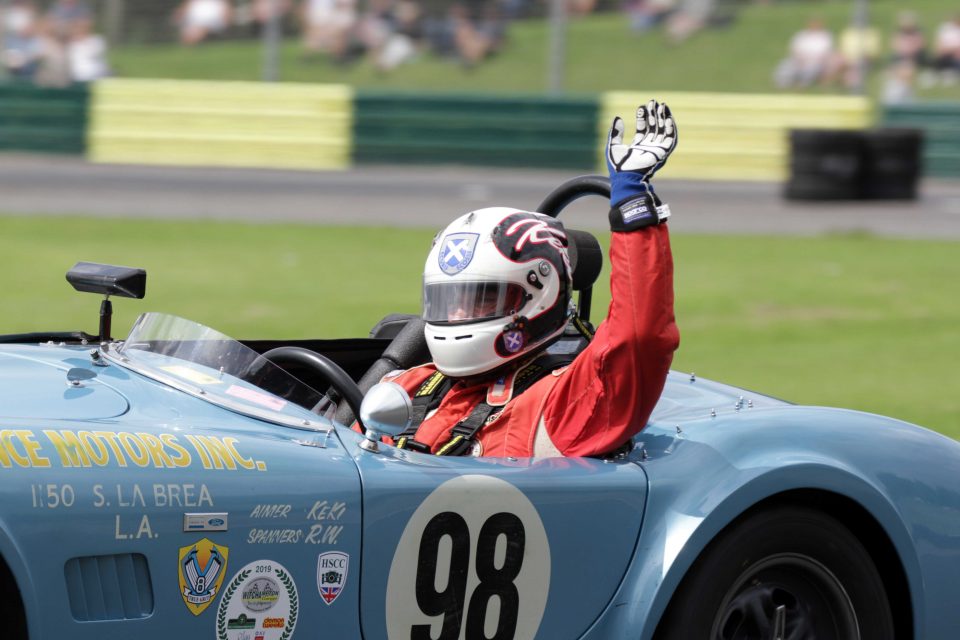 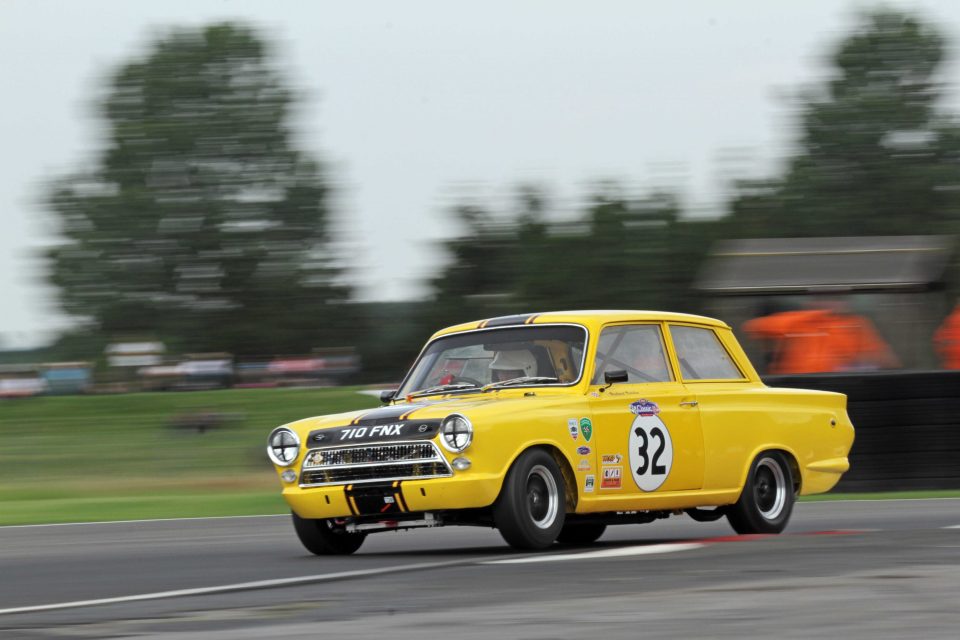 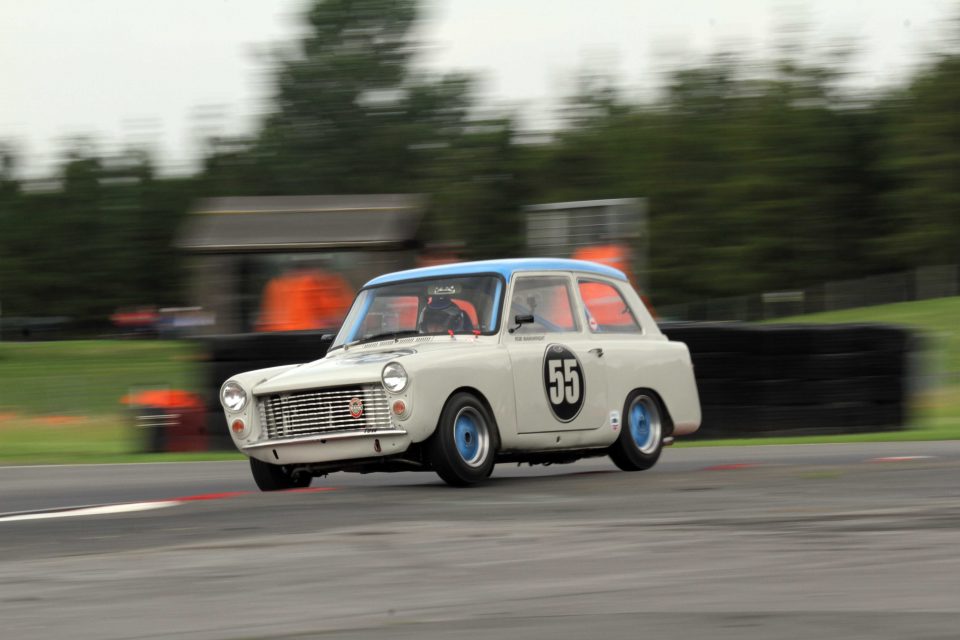 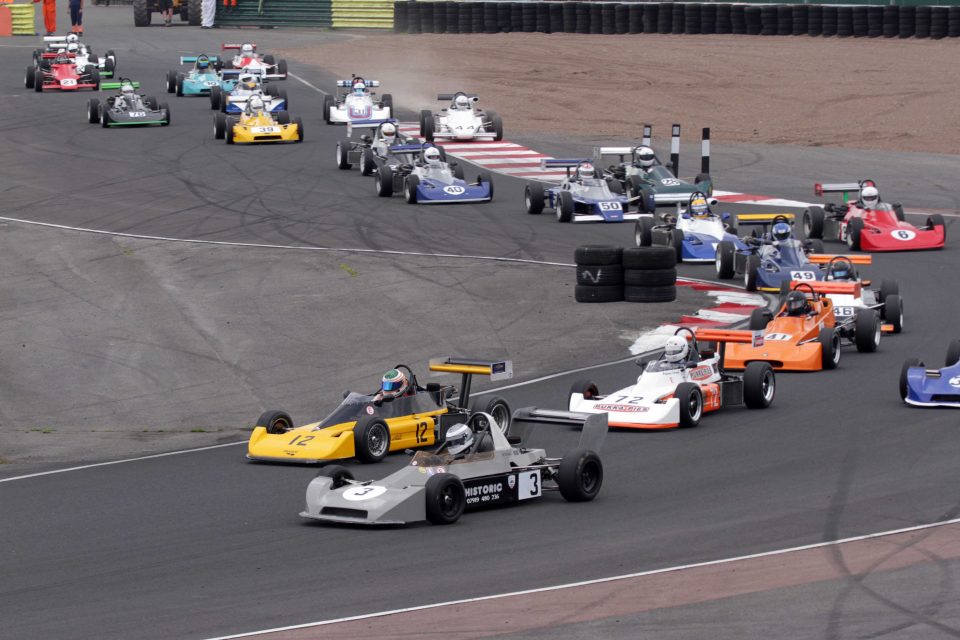 Mark Charteris pulled the same trick as Andrew Park in the Classic Clubmans race. His car was emitting ominous smoke for a lot of the race, but he still kept Alan Cook and Adrian Holey at bay. Cook also followed Charteris home in the second race. B class honours were taken by Gareth Barnett both times, after a fair bit of chopping and changing in midfield.

Cameron Jackson moved closer to the 2019 title when he won both Historic Formula Ford races in his Winkelmann, but not without some drama. The first race was split in half by a red flag, triggered by Pierre Livingston and Ted Pearson coming together between Sunny and the Complex.

Livingston led briefly off the line, shrugging off polesitter Callum Grant (Merlyn Mk20A) and Jackson. He was soon reeled in, however, and the fight was between Jackson and Grant. They traded the lead but Jackson prevailed once more. They were followed by Ben Tusting and Ed Thurston from Classic Team Merlyn, with Over 50s points’ leader Rob Smith leading the division in sixth place.

The second race should have been a showdown between Jackson and the Classic Team Merlyn drivers, as Grant stood down and gave his car to Pearson. However, Livingston and Thurston spent too much time chasing each other and Jackson got away. Their other team-mate Tusting was a distant fourth, ahead of Danny Stanzl (Elden Mk8) and Smith. Pearson was eighth, behind Crossle driver and Over 50 rival Chris Stuart. 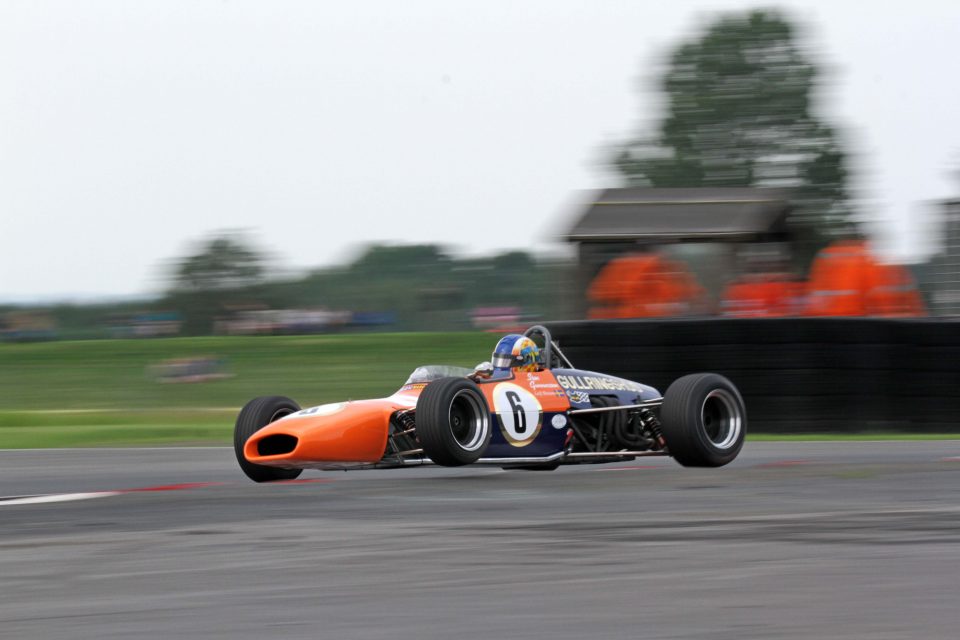 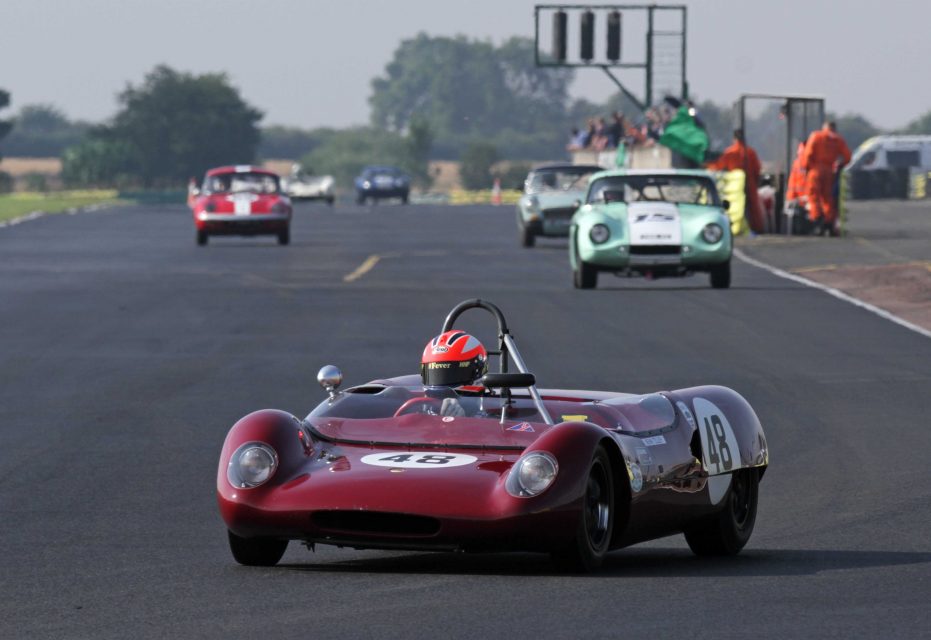 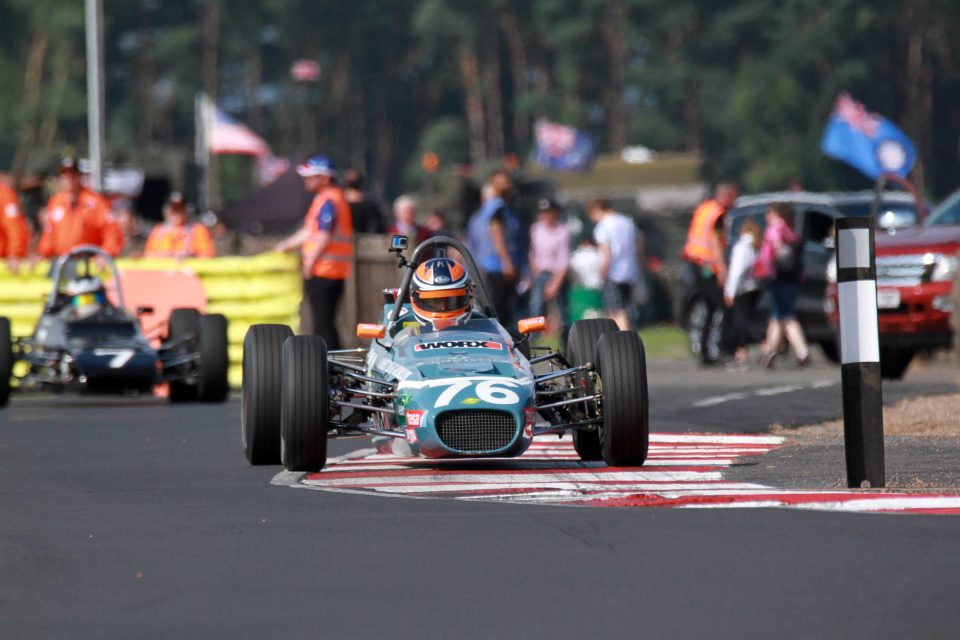 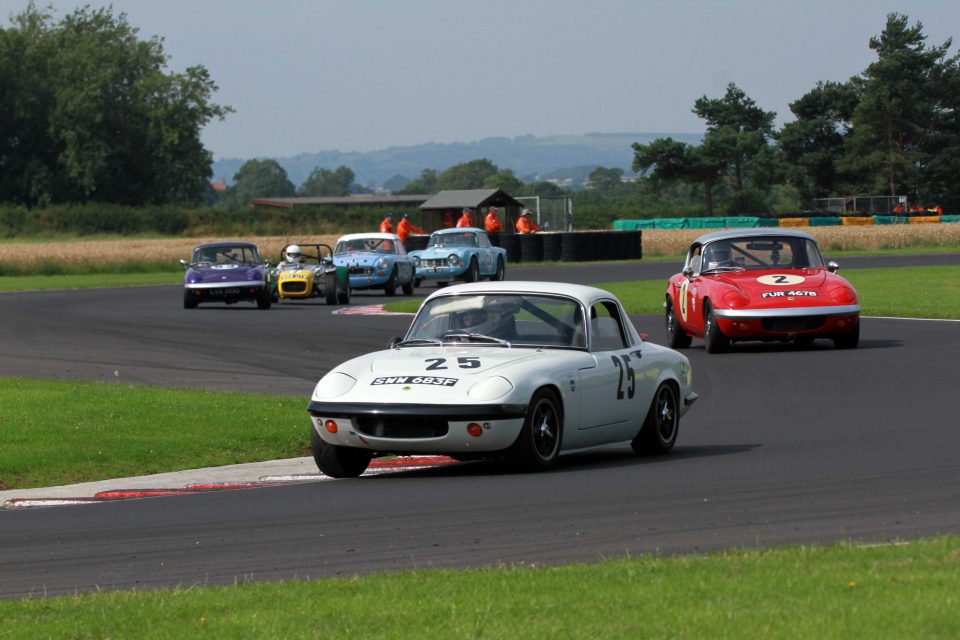 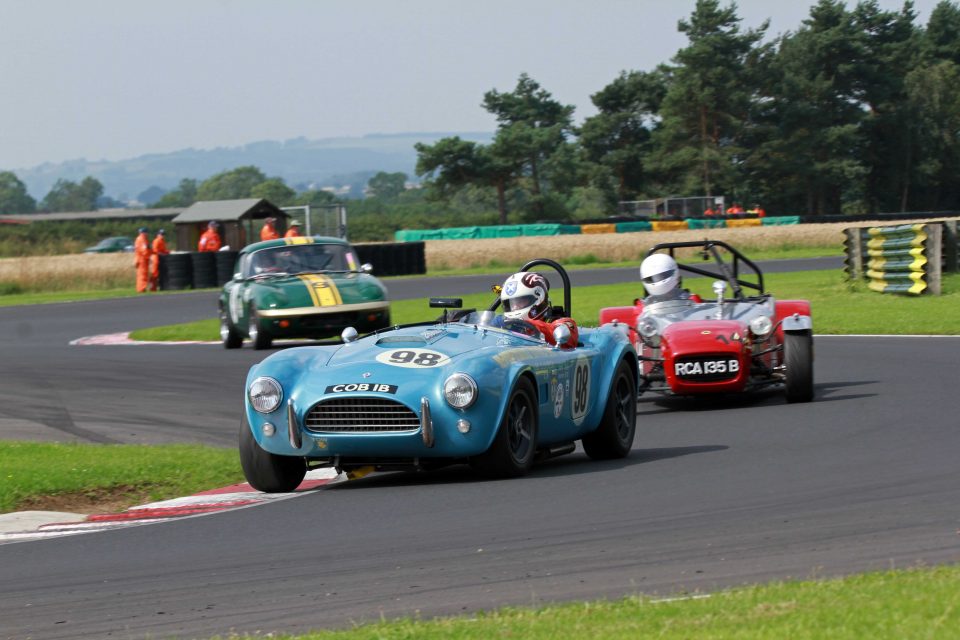 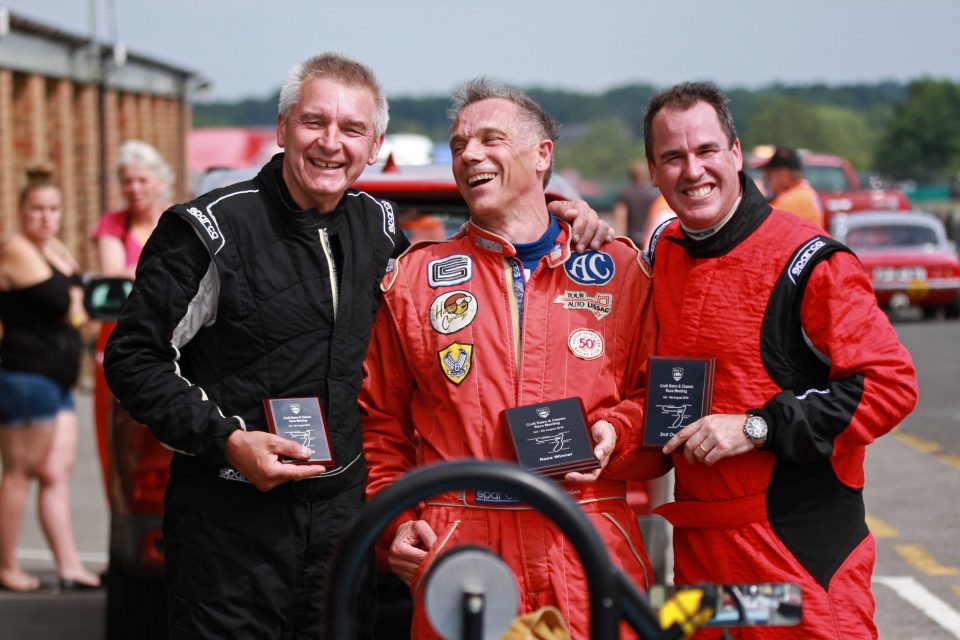 The 70s Road Sports races provided plenty of action and an array of different cars. The two races were won by last year’s champion Jeremy Clark in his Lotus Elan and Will Leverett in his Lotus Europa. These two were joined in the main battle at the front by Kevin Kivlochan’s Morgan Plus 8. Leverett’s father Mark was also in the mix, though although only for the first half of race one as he hit steering problems.

Kivlochan was second in both ‘70s Road Sports races but he maintained his 100% record in the Historic Road Sports Championship with two wins in his AC Cobra. Jonathan Rose’s Lotus Elan was second in race one, ahead of Roger Lee’s Lotus Seven, but this was reversed in race two. Lee pushed Kivlochan hard in the corners, where his lightweight Seven had the advantage over the Cobra, but Kivlochan’s superior straight-line speed kept him ahead. Barry Ashdown recovered from slow starts to finish fourth both times.

No-one could dispute that Ben Tilley deserved his Guards Trophy win in the Lotus 23B but equally no-one could deny that Peter Needham and Jon Waggitt threw the lead away in their Lenham P69, losing 24 seconds during a messy pit-stop. Both the Lenham and Peter de la Roche’s 23B were lapping strongly behind Tilley by the end, but they could not catch him. Mike Gardiner and Dan Cox were the leading GT crew in their TVR Griffith, finishing behind Nick Thompson and Sean McClurg in their Chevron B6.

The Jaguar Classic Challenge grid was modest, but Mark Donnor was made to work for his victory in his E-type. It took him seven laps to re-establish his lead after a slow start from pole and he was challenged by the E-type of Robert Farrell and David Coyne throughout, particularly when Coyne was at the wheel. Jamie Boot was third, never more than a couple of seconds behind the Farrell/Coyne car, with Mark Russell and Tony Jardine completing the leading group.

Both Classic Touring Cars races were contested by a leading group consisting of Richard Belcher’s Lotus Cortina, Jonathan Evans’s Mustang, the Lotus Cortina of Roger Stanford and Bob Bullen in his rejuvenated Ford Anglia. Belcher won both times but there was some shuffling of the pack in the first race, with Bullen briefly leading and Evans leading for a while longer but it settled as it had started. The second race featured some tussling in midfield instigated by Peter Smith in his Lotus Cortina, as the experienced Tom Bradshaw drove Evans’s car.

Our Website uses cookies to improve your experience. Please visit our Historic Sports Car Club at Croft page for more information about cookies and how we use them.