Finally the true Stirling Moss Tribute we have all been waiting for happened at this year’s Goodwood Revival a battle of the titans of modern historic racing and a truly magnificent battle. 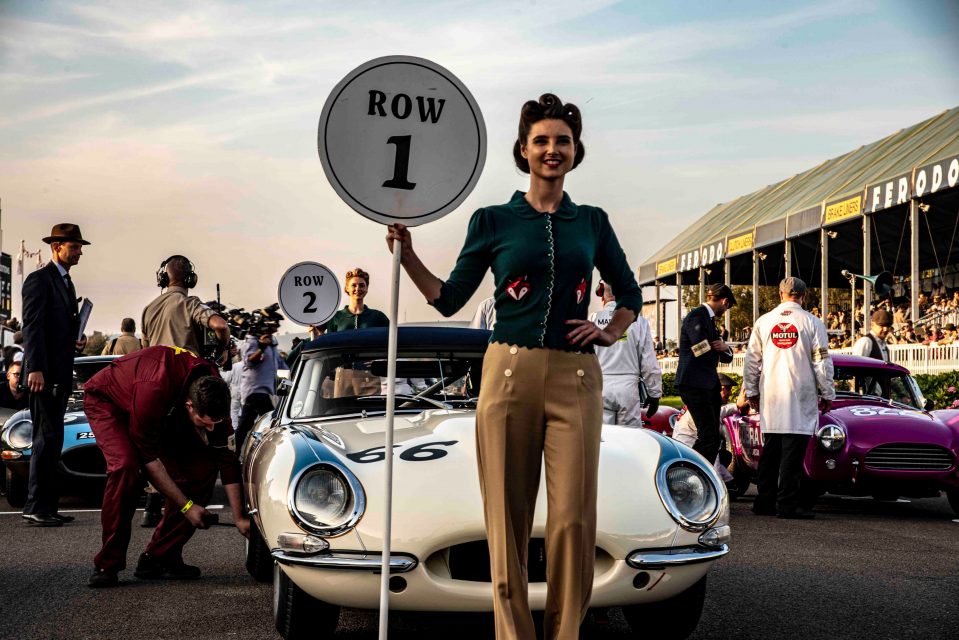 Formula One legend Jenson Button starred on his historic racing debut during a thrilling Stirling Moss Memorial Trophy encounter. The one-hour, two-driver race for closed-cockpit GT cars of the kind raced prior to 1963 kicked off the 2021 Goodwood Revival Meeting programme in thrilling style. The 2009 World Champion, who was sharing a Jaguar E-type alongside his friend Alex Buncombe, revelled in what was also his maiden race outing at Goodwood. 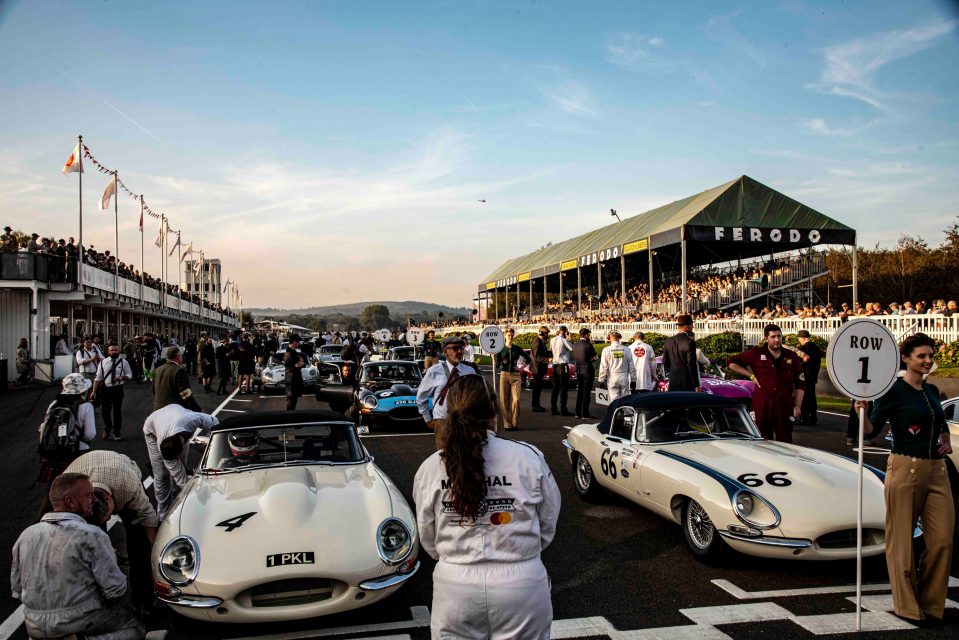 Nevertheless, victory was out of the question. Instead, it was the E-type of Harvey Stanley and James Cottingham. who claimed the spoils. Former World Sports-Prototype Champion Martin Brundle started from pole in the Jaguar he shared with his son Alex. However, it was Stanley who led away in. Second place was initially held by fellow Jaguar man John Young only for the veteran to endure a lurid spin. Stanley managed to eke out an advantage after Brundle Sr battled hard with new third place man Jon Minshaw in the E-type he was sharing with Phil Keen. 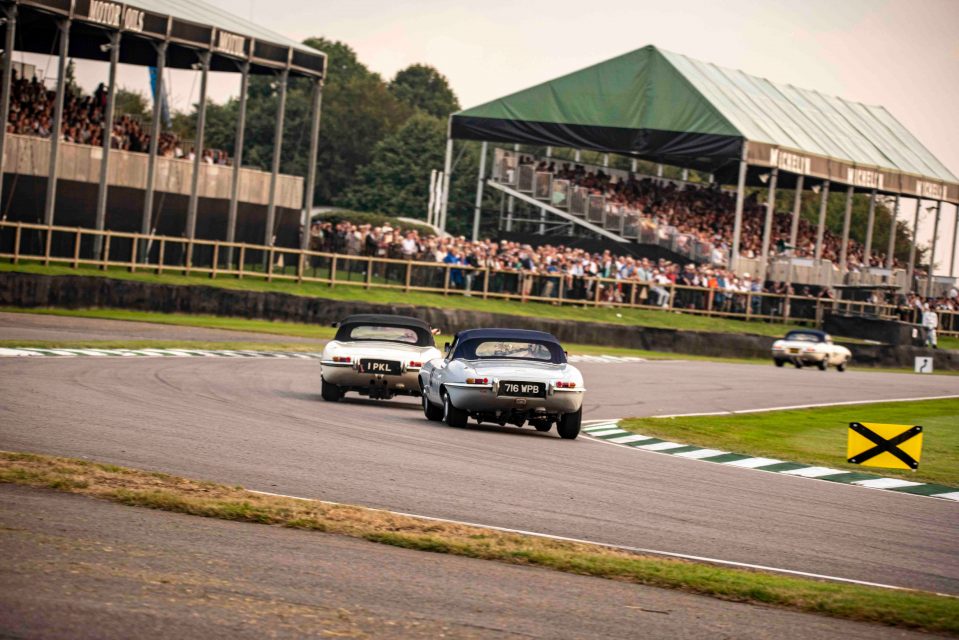 The lead trio managed to drop the ‘Dragonsnake’ AC Cobra of Mike Whittaker and Mike Jordan, the purple-hued car making its circuit debut at the Revival Meeting having previously been a star of drag racing. The top three stopped together 22 minutes in to swap seats with their respective co-drivers, the Cobra claiming the lead. Keen headed Brundle Jr on venturing trackside with Cottingham leaving the pits 20 seconds in arrears after his wingman had problems with his harness. 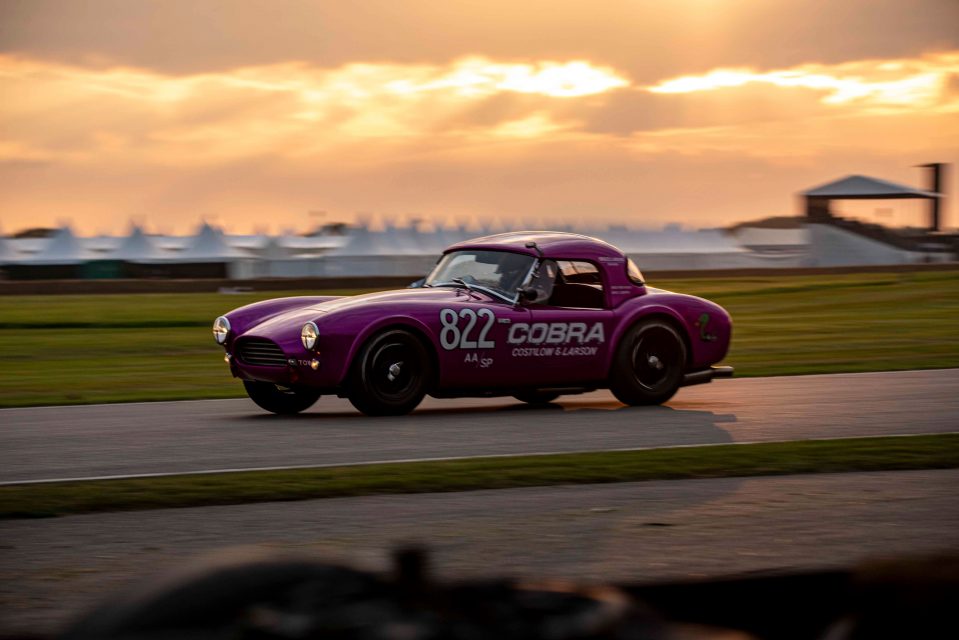 After 32 minutes had been run, and with most driver changes having been made, Keen headed the field with Minshaw following in his wheel-tracks, with Cottingham guiding the third-place Jaguar on its lock-stops as he clawed back lost ground. Unfortunately, the Brundle E-type spun on its own oil after the engine blew and connected with the barriers shortly thereafter. The safety car was brought out with 27 minutes left to run, the gap between Keen and Cottingham, which had been reduced to 14 seconds, was annulled at a stroke. 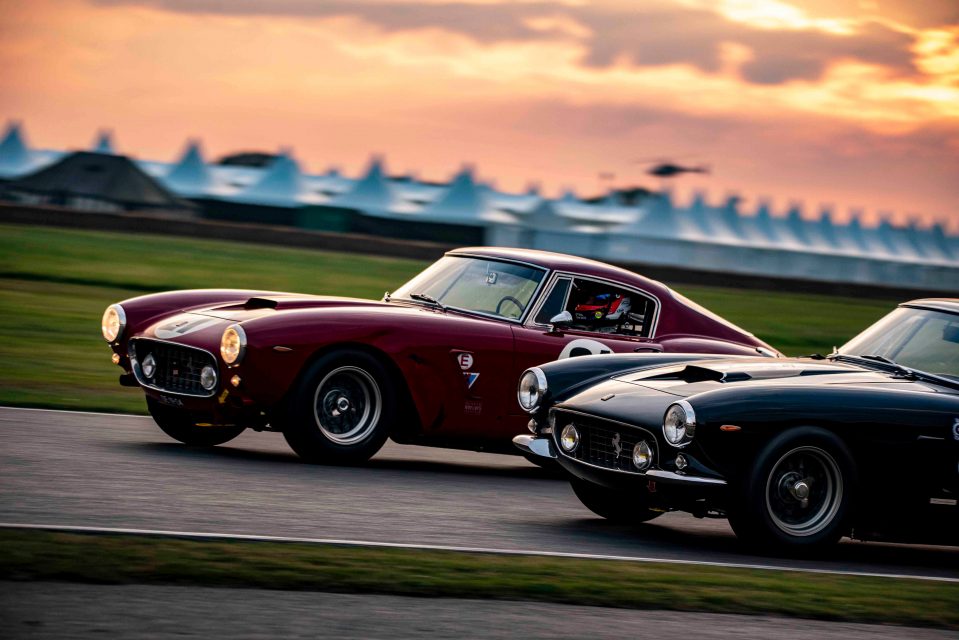 Racing resumed with ten minutes left to run. Keen blasted into the distance, although Cottingham soon made inroads. He jumped Keen with six minutes left on the clock and held on to take honours. Button, meanwhile, came home seventh 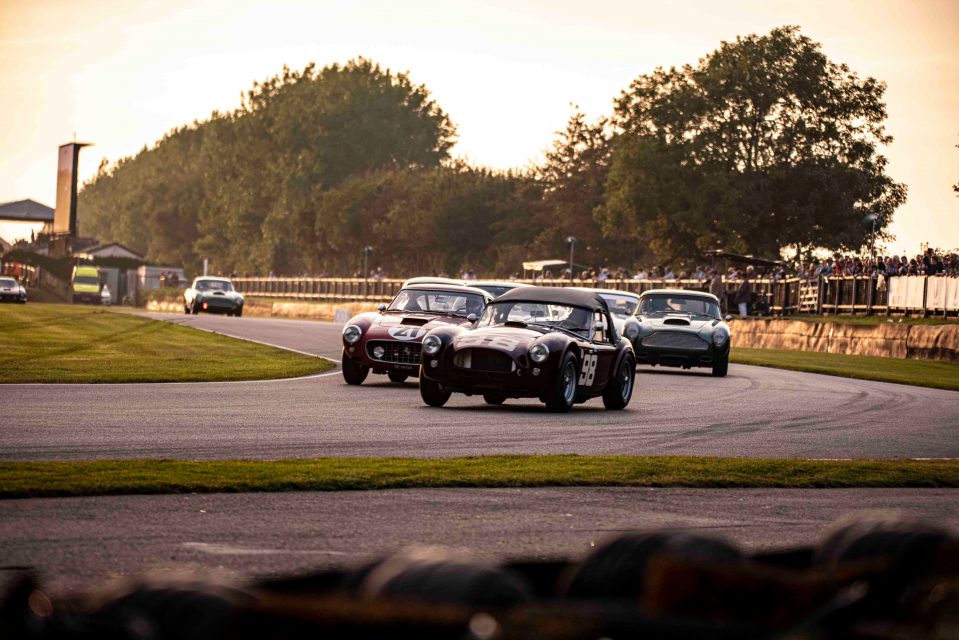 Jenson enjoyed his stint, the Goodwood rookie saying later: ‘It was really good. I overtook three cars at the start but then got bogged down and lost the places. I improved on this morning, though. We started nineteenth and were up to sixth by the time the safety car came out. I am very lucky to be sharing a car with Al. He’s competitive in anything he drives. I am looking forward to racing the Cobra in the TT with him later this weekend.” 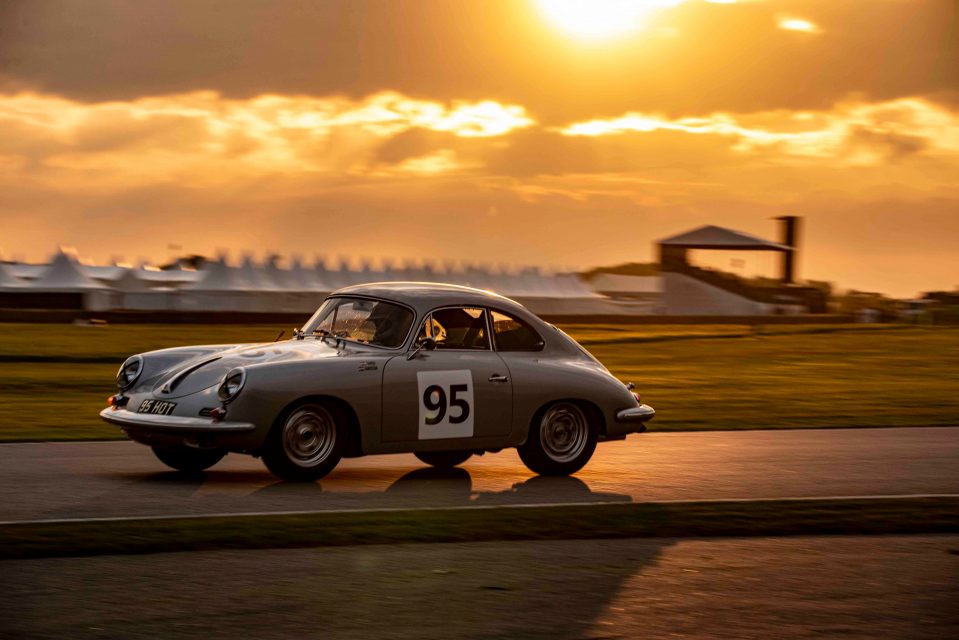 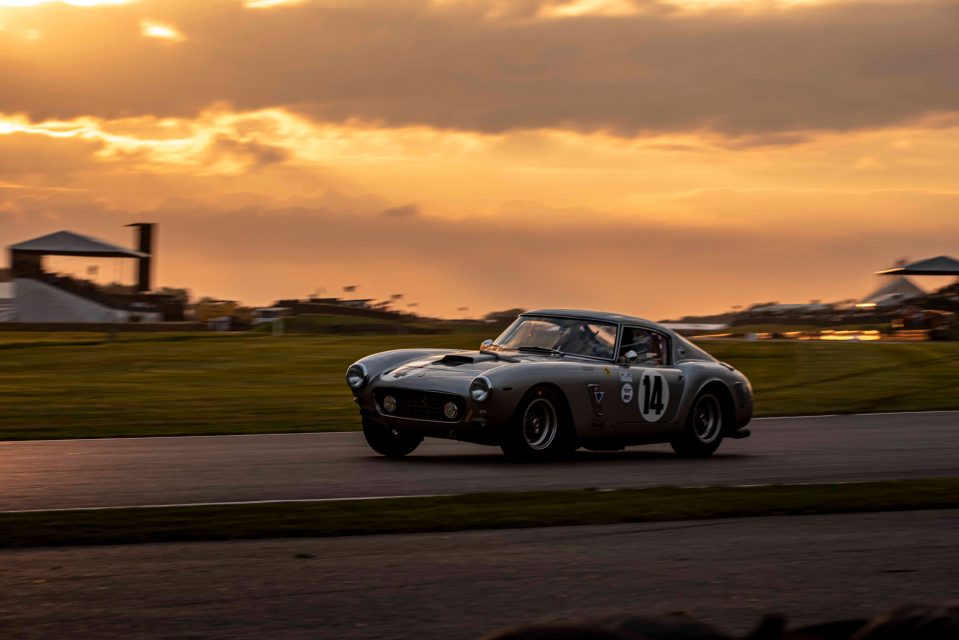 Cover shot: Goodwood Press all other shots: Oliver Flower – If you are looking for more images from this race please contact : Oliver Flower at Full Throttle Photos 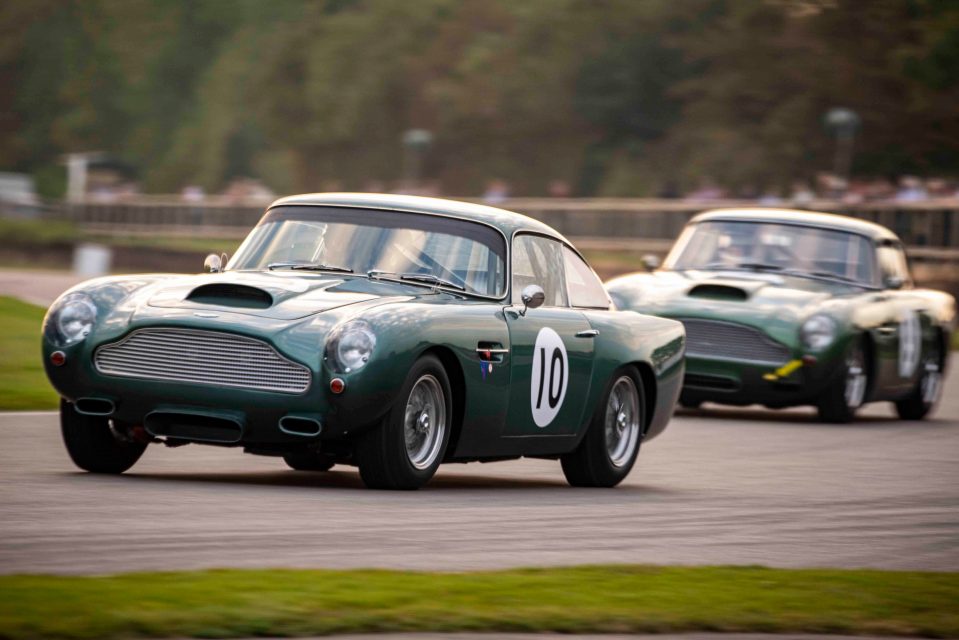 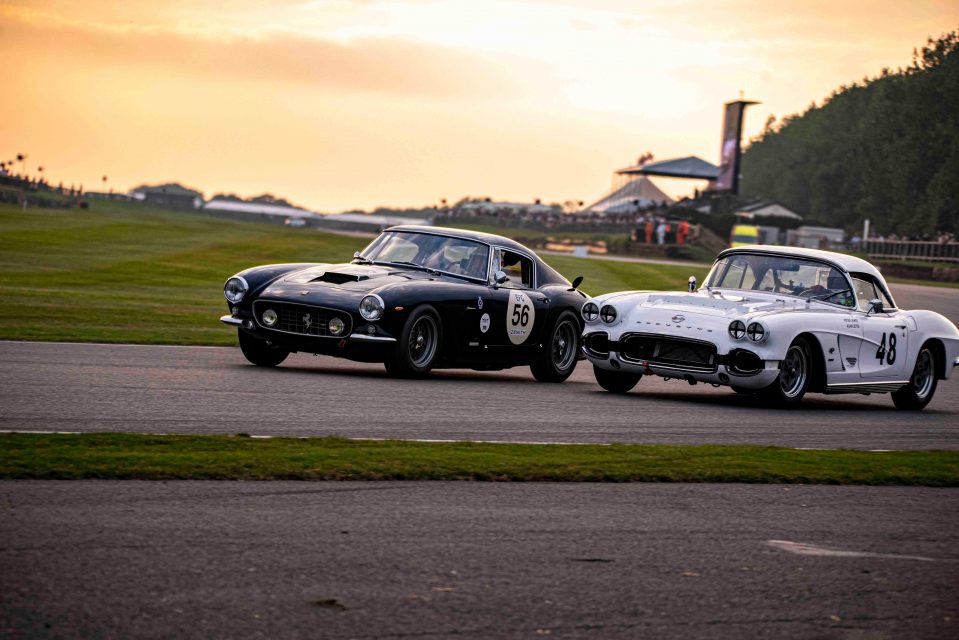 Goodwood has been honouring the much-loved and equally missed Sir Stirling Moss OBE over the Revival Meeting weekend. Few tributes in Revival history have ever packed such an emotional punch, the racing knight – ‘Mr Goodwood’ himself, having passed away on the 12th April 2020. Saturday’s parade was especially poignant as it marked the anniversary – to the day – of him making his Circuit debut in 1948. He won first time out in a three-lap F3 thrash and went on to claim a further 21 wins and 12 podium placings here.

Around 60 cars associated with this remarkable man’s career took to the Circuit, the oldest being the 1937 BMW 328 Frazer Nash aboard which the then teenager embarked on his career in 1947. Moss’ virtuosity aboard any car and in any discipline of motorsport was legendary, and other cars on-track spanned everything from the Cooper-JAP Mk10 in which ‘The Boy’ raced at Goodwood in 1950 to Ross Brawn’s Ferrari 250 GT SWB in which he sealed honours in the Tourist Trophy a decade later.

Other standouts included the Mercedes-Benz 300 SLR aboard which he and Denis Jenkinson won the 1955 Mille Miglia, his drive being widely heralded as being among the greatest ever. Lady Moss was chauffeured in the car on Saturday afternoon in what is now often touted as being the most valuable car in the world. Also out on track was the Ferguson-Climax P99 in which he hoisted the 1961 Oulton Park Gold Cup. It represented the sole occasion in which an F1 race was won by an all-wheel drive car.

Some vehicles that may have been hitherto unfamiliar to fans of the great man included the 1955 Moss & Lawson Trials Special in which he briefly competed off-piste. That, and a lawnmower on which he and Derek Bell won the 12-hour Wisborough Green endurance race in 1978. Five-time Le Mans winner Bell, another legendary figure at Goodwood, was on-track in a Porsche Spyder as campaigned by his boyhood hero in period. World Champions Sir Jackie Stewart and Damon Hill were also on hand to honour the great man, the former saying: ‘He was the absolute perfect racing driver.’ Hill labelled him: “Motor racing’s first superstar.”

Speaking ahead of the track parade, the Duke of Richmond spoke of a friend, a man who “had God-given talent”. He said: “He entered his first motor racing here in 1948. Stirling didn’t just win; he overwhelmed and crushed his rivals… It was the birth of a sporting legend… We miss you more than we can possibly say.”

Our Website uses cookies to improve your experience. Please visit our Goodwood Revival – The Stirling Moss Trophy Tribute Race page for more information about cookies and how we use them.