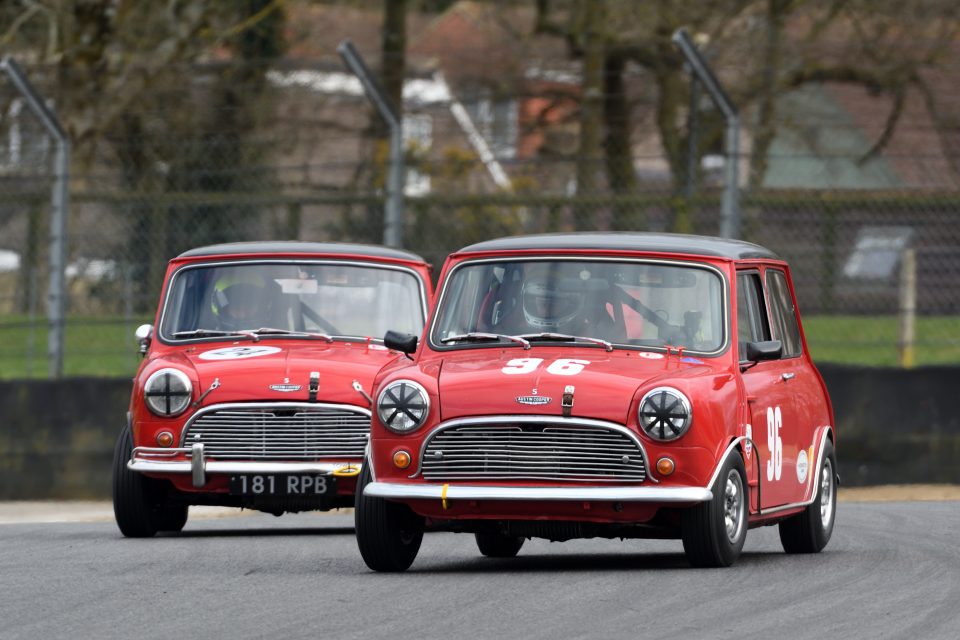 The Historic Sports Car Club’s 2022 racing season got off to a tremendous start at Brands Hatch over the weekend (2/3 April) with some great racing on the Indy circuit.

On a cold but dry weekend the 70s Road Sports Championship opened with a double-header and two enthralling races delivered victories for Kevin Kivlochan and Charles Barter.

In the opening race Barter set the early pace in his Datsun 240Z until a misfire set him and sent him to the pits. Jeremy Clark wriggled his Lotus Elan to the front and withstood lap after lap of pressure from Kivlochan’s Morgan Plus 8. Clark drove a superb race and seemed to have just done enough until he ran wide at Graham Hill Bend on the last lap. That was all that Kivlochan needed to dive ahead and steal victory. Paul Tooms brought his Lotus Europa home third while fourth overall was a fantastic result, the best yet, for David Tomkinson in his giant-killing TVR Vixen. 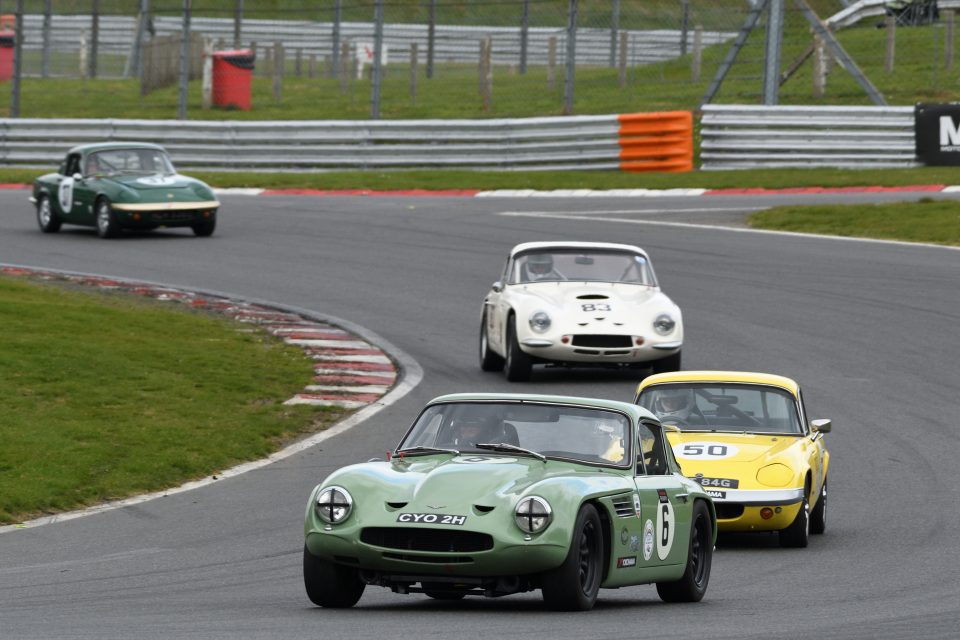 Later, the cars were back out for the second race and Kivlochan led as far as Druids on the opening lap before the Morgan plunged off into the gravel. After a red flag, the Morgan was pulled out of the gravel and Kivlochan re-took his pole position to lead once more over the early laps as Clark and Tooms lead the chase. 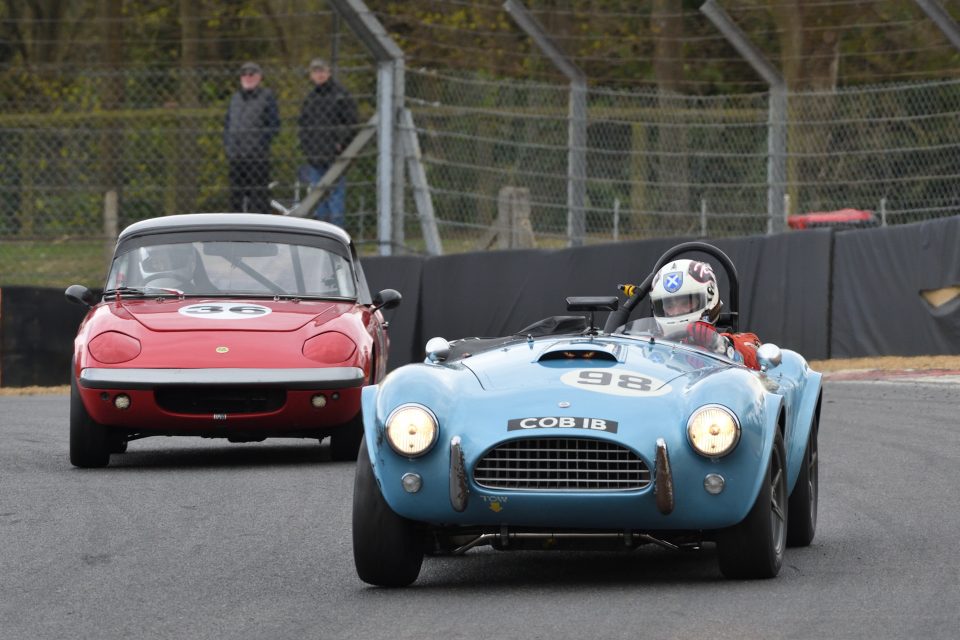 Meanwhile, Barter had started dead last on the grid but stormed up the order to move into fourth and then started attacking the leading trio. At the same time, Kivlochan started to lose ground and eventually slipped to fourth as Clark took the lead. But Barter dived ahead on what proved to be the lap that mattered as the Morgan dumped all its oil going into Surtees and the race was halted. 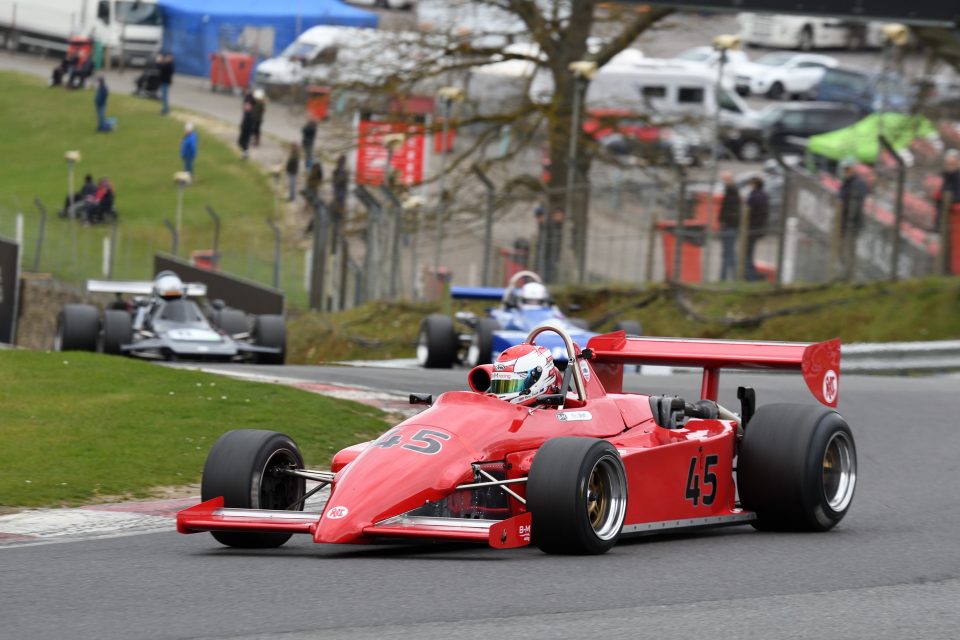 The combined Formula Atlantic and Classic F3 races were won in style by Rory Smith in his Ralt RT4. Mark Mercer led the opening laps of both races in his earlier March but could never hold off the flying Ralt as the race developed. Once ahead, Smith romped clear for two commanding wins.

Mercer well deserved his second place on Saturday as young Samuel Harrison finally got the better of Robin Lackford’s GRD 272 to bring his Lola T240 home third. On Sunday, Mercer was a late retirement, so Harrison moved up to second place. Best of the Formula 3 pack was Tony Hancock in the Lola T670 who had a little in hand over David Thorburn’s Ralt RT3. 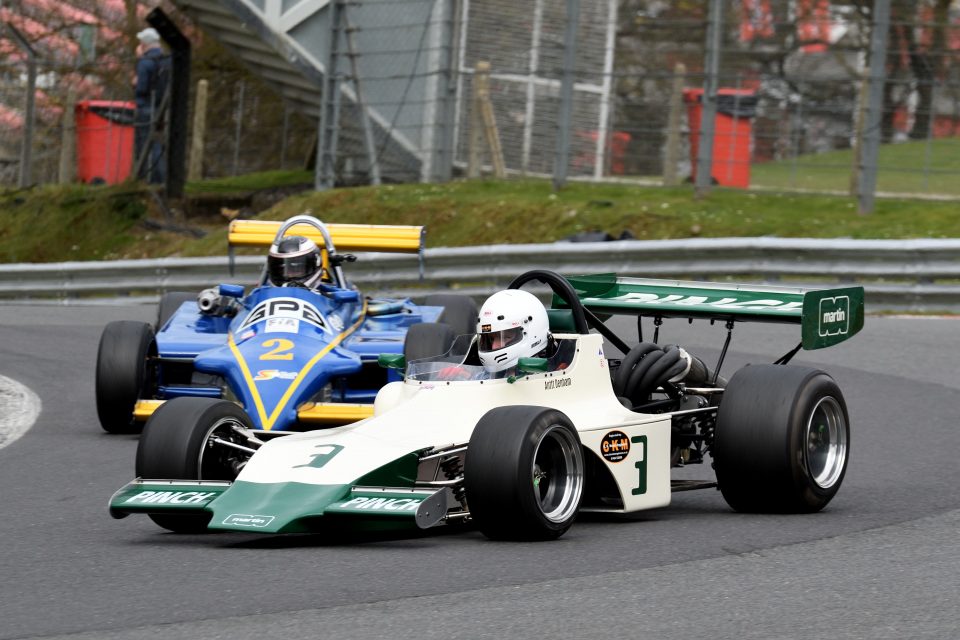 Formula Juniors had a single race for each grid and in the quicker rear-engined set Michael O’Brien was a commanding victor in the Speedsport Brabham BT6. In the early laps, a fine four-way battle ran at the head of the race, as Horatio Fitz-Simon, Clive Richards and Andrew Hibberd chased O’Brien. While O’Brien then eased away, Fitz-Simon and Richards battled mightily for second until Fitz-Simon lost engine power at Clearways and cruised to the pits. In the largely front-engined race Chris Drake won at a canter in his Terrier as Nic Carlton-Smith had to race hard in his Kieft to fend off Alex Morton in the Condor. 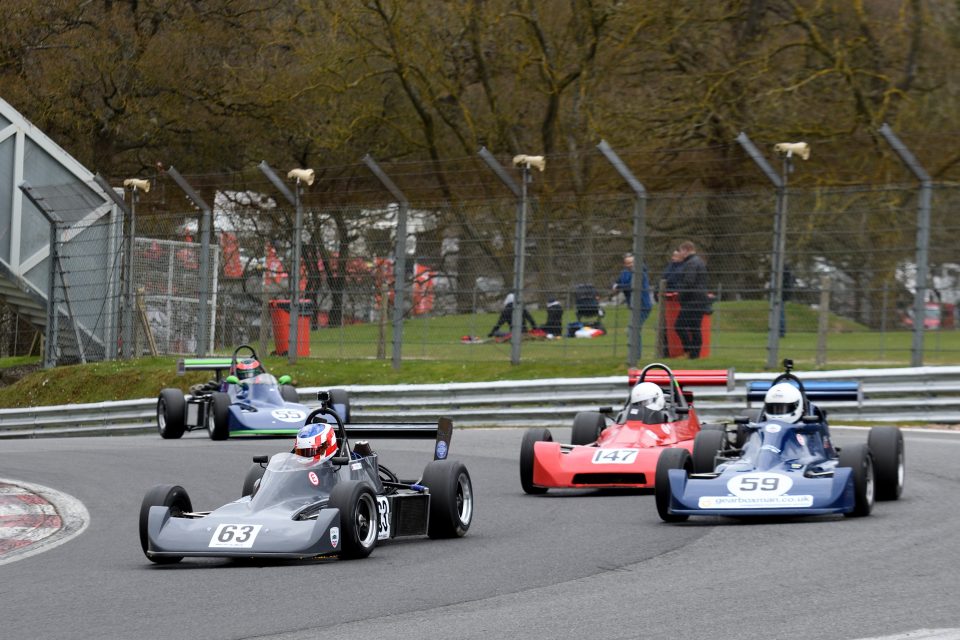 Benn Simms set a fierce pace in the opening Historic Formula Ford 2000 Championship contest. Twice Simms got away from the start and went clear of fellow former champions Graham Fennymore and Andrew Park but the red flag came out after Ian Foley and Jason Redding tangled at Paddock. The second attempt lasted only a lap or two and the third attempt was rescheduled for Sunday morning when Simms again took control. 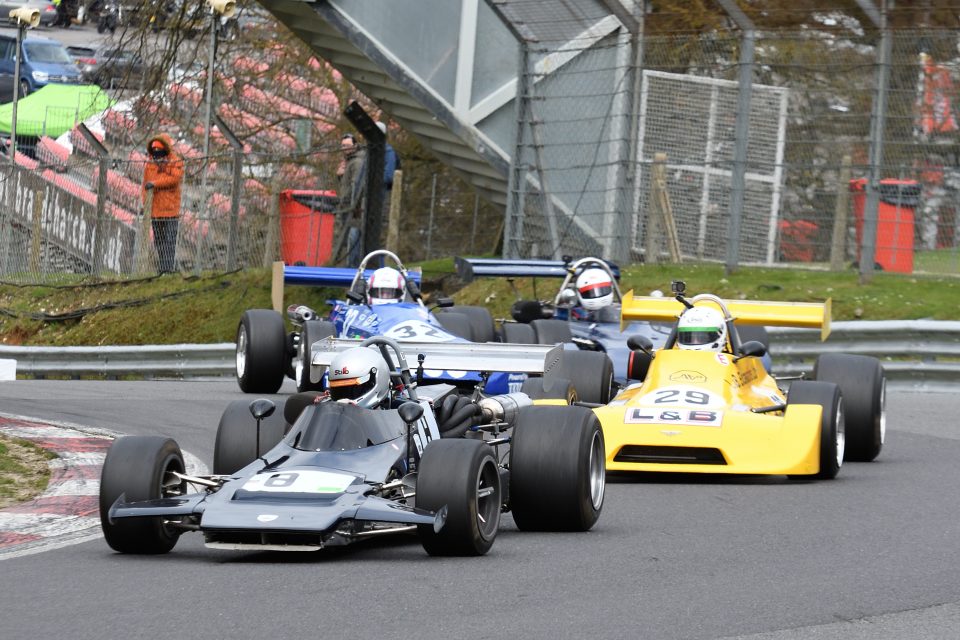 The second FF2000 Championship race went the same way as Simms once again got off the line superbly and made his break on the opening lap. Fennymore and Park were the best of the rest and this time Fennymore was fractionally ahead when the race was halted after 13 laps with Gary Fletcher’s Delta stranded in the gravel at Paddock.

John Harrison was the class of the Classic Clubmans field and held Spencer McCarthy at arm’s length in both races for a fine pair of wins on his home track. Behind McCarthy, Mike Lane and Alan Cook rounded out the top four. In the B Sport class Clive Wood took a double win, though his progress to victory was aided by problems for Barry Webb. 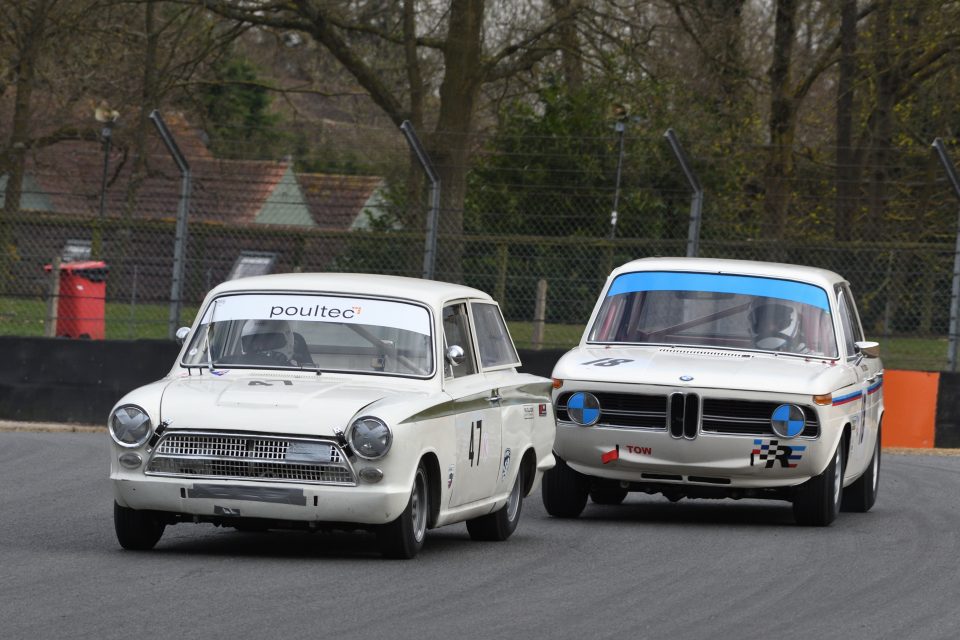 The opening Historic Touring Car race was a real highlight. Four cars set the pace, topped by Jack Moody in his newly-built Lotus Cortina while Bill Sollis threw his Mini Cooper around to head the chase. Mike Gardiner and Bob Bullen were right in contention and it was Gardiner who picked his way to the front when Moody slowed with a misfire, Bullen had oil pressure issues and Sollis ran short of fuel thanks to a carburettor problem. With his fuel flow restored, Sollis charged ahead in the second race when early leader Gardiner briefly faltered. 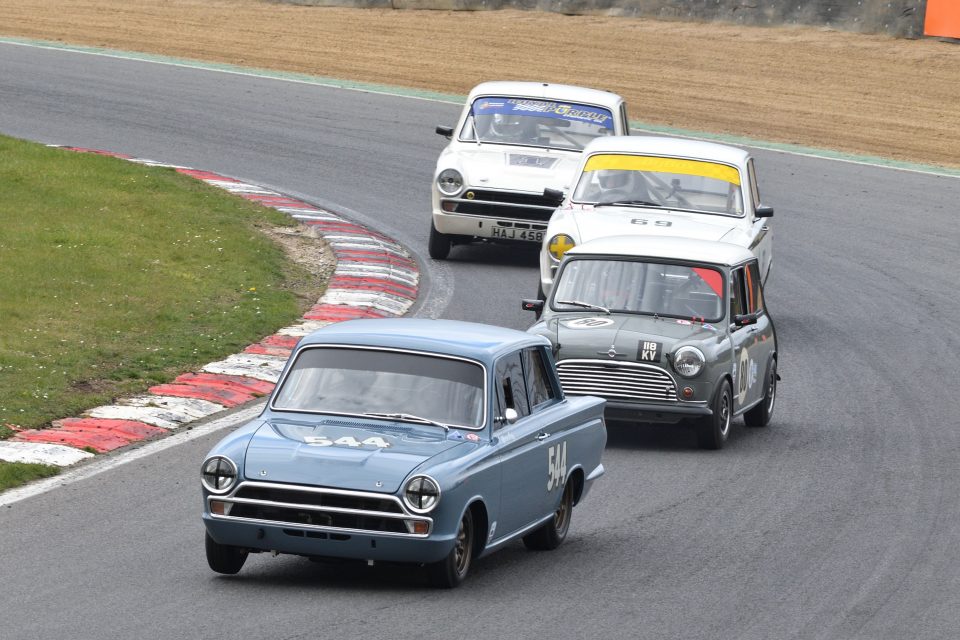 The Historic Road Sports race was a fine affair and the result was in doubt until the last corner. Frazer Gibney worked his Lotus Elan ahead at the start but then had the AC Cobra of Kevin Kivlochan pressing hard. Eventually power told, and Kivlochan moved ahead but Gibney was not about to give up and gave mighty chase. Into Clearways for the final time, Gibney gave it his best shot with a bold attack and came so close to getting under the Cobra. Peter Garland worked his Morgan Plus 8 ahead of Jonathan Stringer’s Lotus 7 to take third. 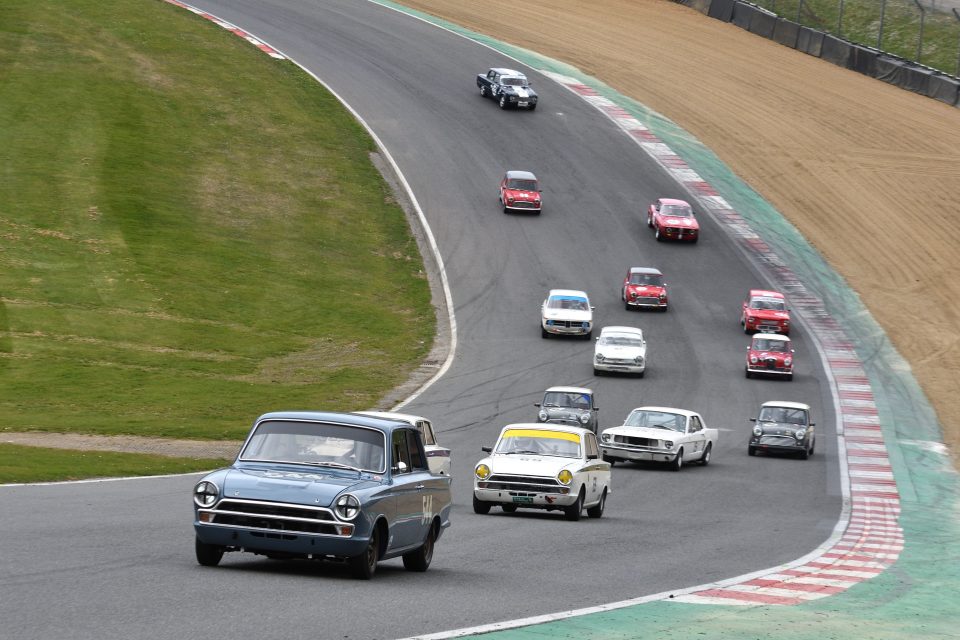 Pictures thanks to Simon Hildrew for copies please contact:
07970 808510  simon@simonhildrew.com

Our Website uses cookies to improve your experience. Please visit our Flying start for HSCC season at Brands Hatch page for more information about cookies and how we use them.