At least two Historic Sports Car Club racing champions for 2021 were crowned as the club returned to Mallory Park for the first time in a decade for a weekend of racing (18/19 September).

The weekend delivered some great racing in generally warm and sunny weather, despite a torrential downpour on Sunday morning that disrupted qualifying for a while. 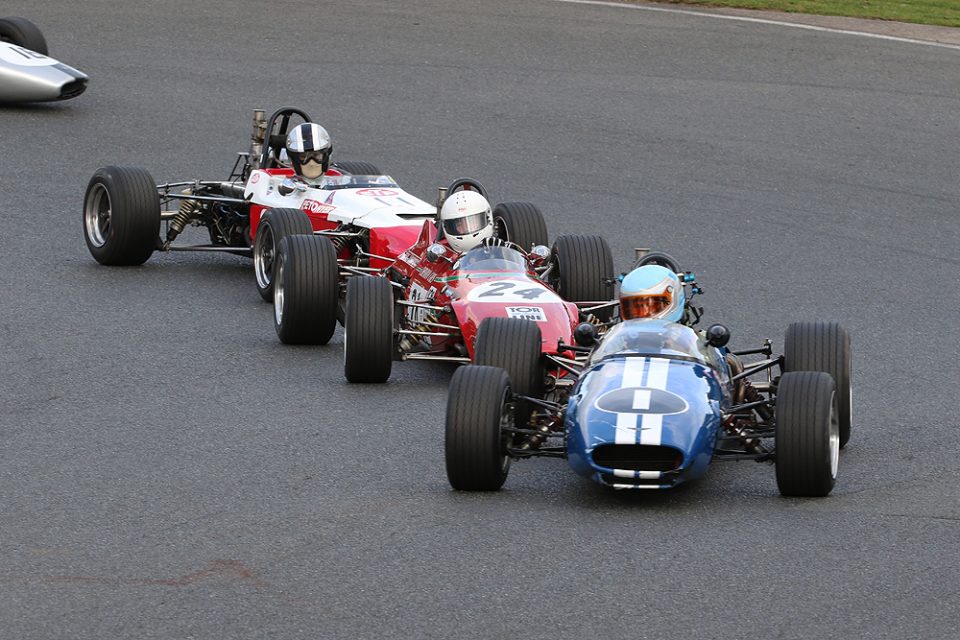 Grids were a little down on what had been expected and it is clear that the clash with the Goodwood Revival had kept some entrants away, while some others were still resolving issues from Oulton Park three weeks earlier. However, those that were there enjoyed a double-header on this friendly circuit, where slick organisation ensured both days ran smoothly despite the weather interruption on Sunday.

For Historic Road Sports racer John Davison it was a mixed day on Saturday when he did enough in the opening race to put the title beyond doubt with another victory. However, that seemed less likely when his Lotus Elan was returned to the paddock after qualifying on a full lift. 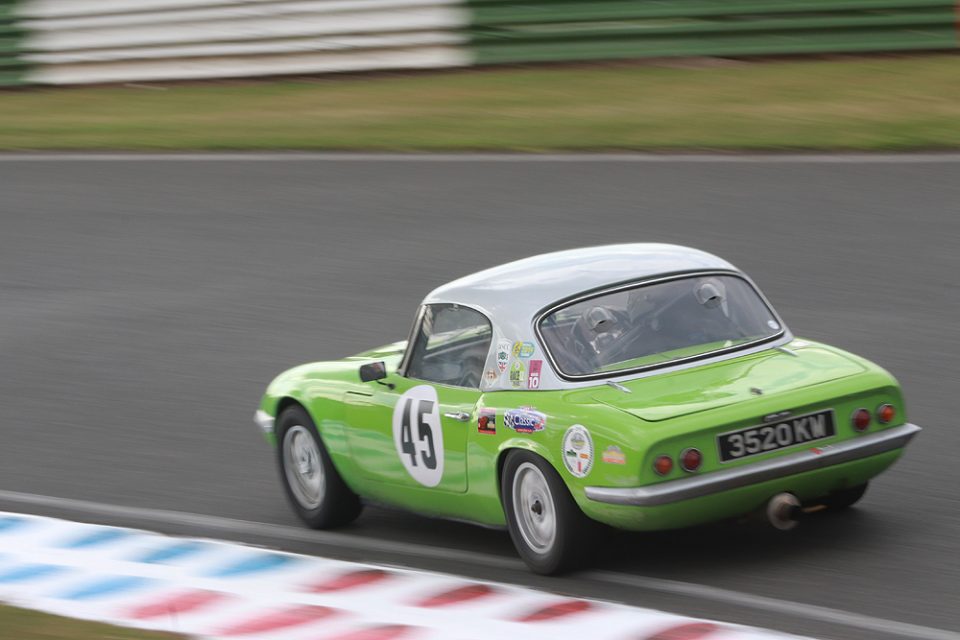 The brakes had seized on at the Hairpin but everything was refettled for the opening race and Davison duly raced clear. Later, he was leading the second race when a rear wheel departed and ended his day but it was still a case of mission accomplished in championship terms. With Davison out of the second race, it was left to Rupert Ashdown to score his first overall race win in the hard-working family Elan, while a delighted Chris Merrick took an HRS best of second overall after a tremendous run in his Elan. 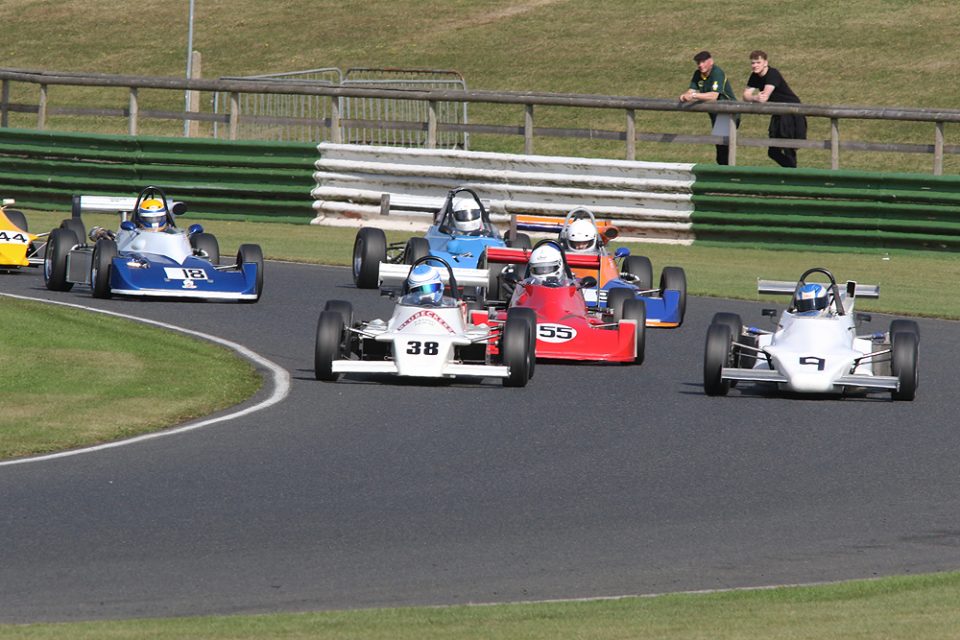 Historic Formula Ford 2000 featured prominently with a busy double-header. Murray Shepherd was the sole Classic FF2000 runner, so he joined the near capacity grid and ended up taking a weekend double despite the very best efforts of Historic front runners Benn Simms and Ian Pearson. 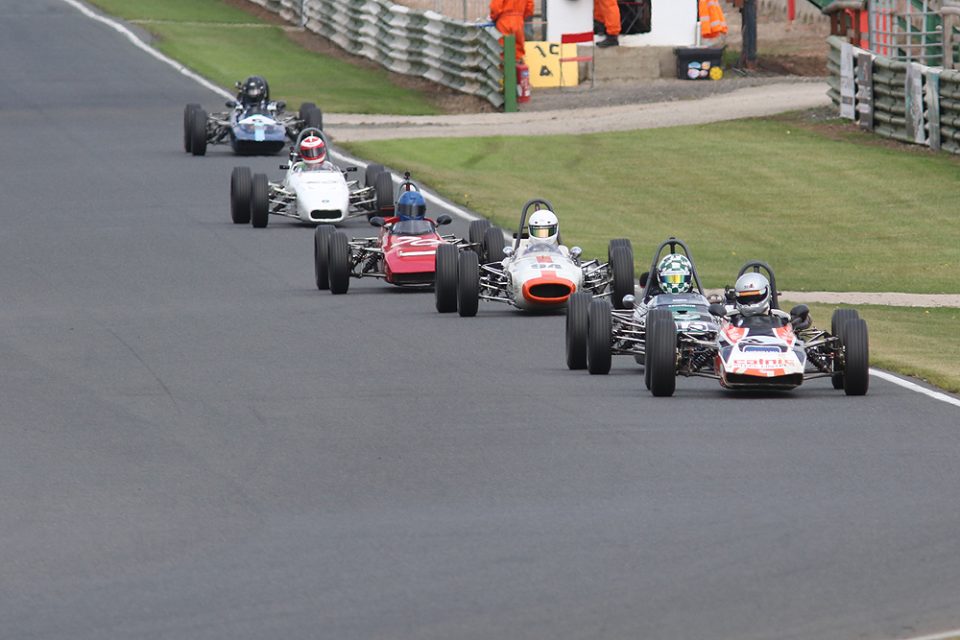 On Saturday, Simms battled wheel-to-wheel with Shepherd until his Reynard ran out of fuel with three laps to go. A new fuel tank had recently been fitted and it failed to pick up the last couple of litres that should have got Simms home. 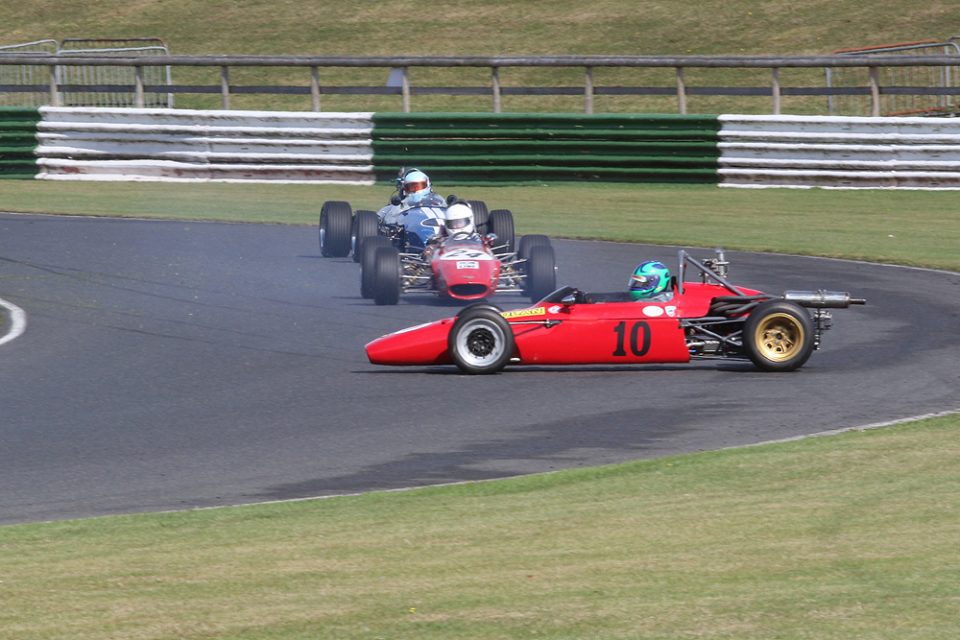 On Sunday, Pearson made a blinding start to lead for much of the race under pressure from Shepherd only to have his Royale stick in third gear at the Hairpin and slip to fifth. It was far less than he deserved. Meanwhile, Simms drove a tremendous race to battle from the back of the grid right up to second. He passed eight cars before Gerard’s on the first lap and was quickly into the top five. He then closed in on the battling Pearson and Shepherd but was never quite able to get on terms as Shepherd took his second win of the weekend. Ben Glasswell was a fine third on Sunday to round out the overall podium while on Saturday it had been Graham Ridgeway completing the podium ahead of son and father Ben and Stephen Glasswell. 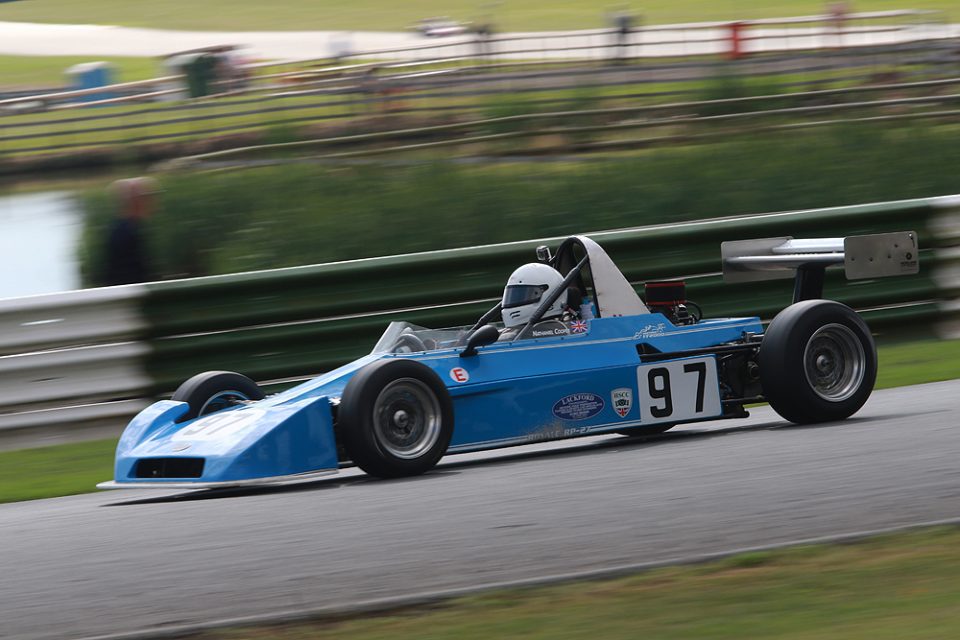 Another champion crowned in fine style was Jeremy Timms who took two resounding victories in Historic Formula 3 to settle the title in the final races of the season with his Chevron B15.

After a soaking wet and shortened qualifying session the grid was very jumbled and Timms started only eighth. However, he was quickly into his stride and swept up the order to move ahead of Ian Bankhurst and Steve Seaman in a thoroughly entertaining race. Sam Wilson had been right with them in Paul Waine’s De Sanctis but spun at Gerard’s and a starter motor problem ensured that he was not able to continue.

At the end of the afternoon Timms had an easier time to romp clear as Wilson, Bankhurst, Simon Armer and an inspired Mike Walker battled. Bankhurst finally took the place from Walker who had his best performance so far in Historic F3. Wilson went out when the De Sanctis lost drive and Armer had his March cut out at the Hairpin on the final lap. He coasted down the hill to get to the finish line but dropped several places as a result.

Another strong 70s Road Sports grid was headed by Will Plant although in the opener he had to deal with the fast-starting John Williams and then had Dave Karaskas (TVR 3000M) and his father Richard as constant shadows. Williams should have been on the podium but had gear selection dramas at the Hairpin on the final lap and slipped to fourth as he coasted to the finish line. 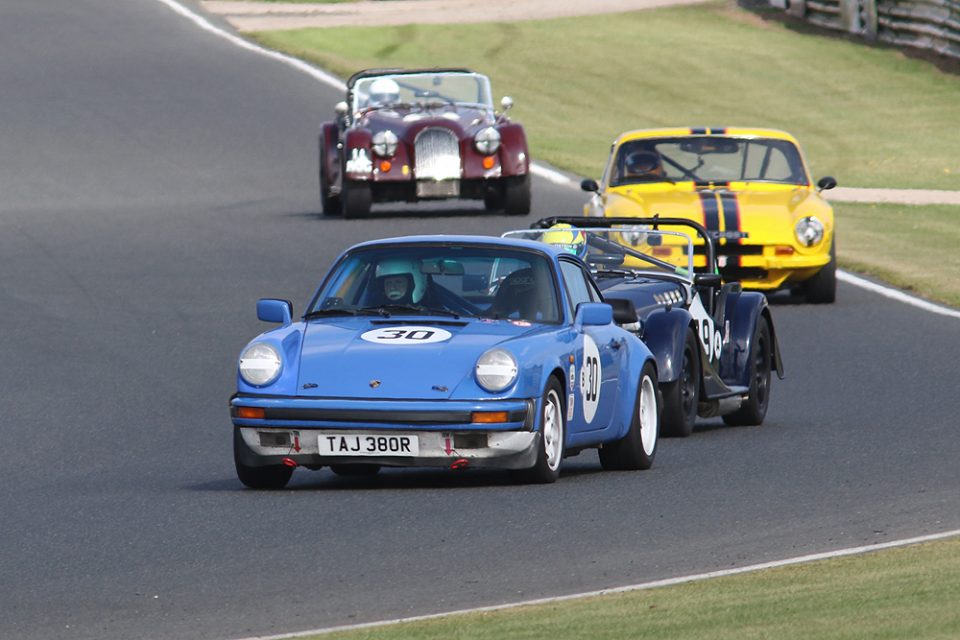 In the second race Plant was away clear until his Morgan +8 lost oil pressure and he quickly turned it off and parked up. Meanwhile, the unfortunate Karaskas had speared into the barriers at the Esses after unintentional contact during some lappery and it was Williams who brought the Porsche through for a well-earned victory over Plant senior. 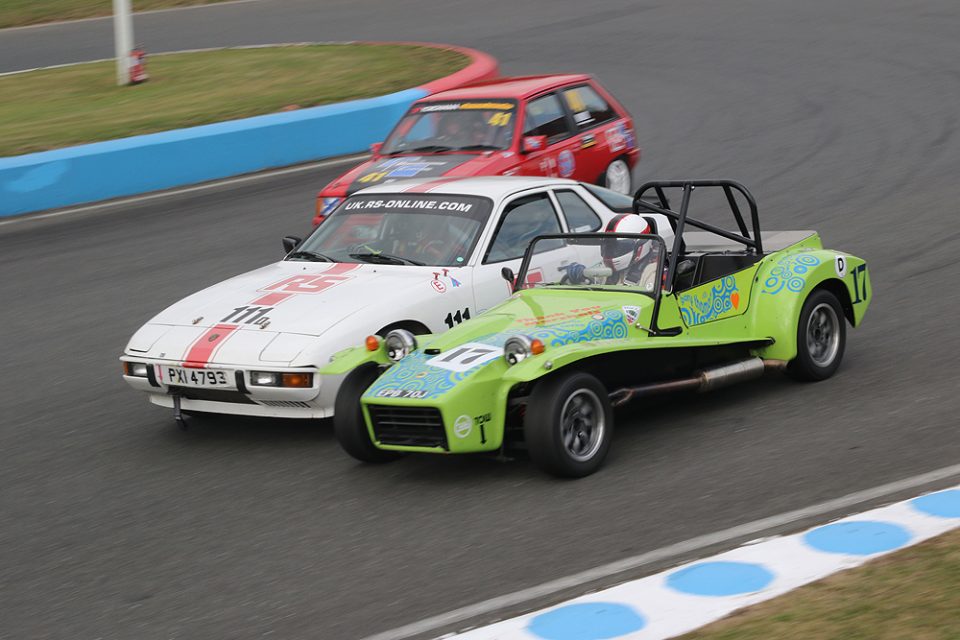 A little way back, Gavin Johnson and Gary Thomas had a titanic scrap for Class D spoils, with Thomas struggling to get the misfiring Lotus 7 out of the Hairpin on every lap and running wheel-to-wheel with Johnson’s Porsche 924. Eventually, Johnson got the verdict by three quarters of a second after a huge contest. 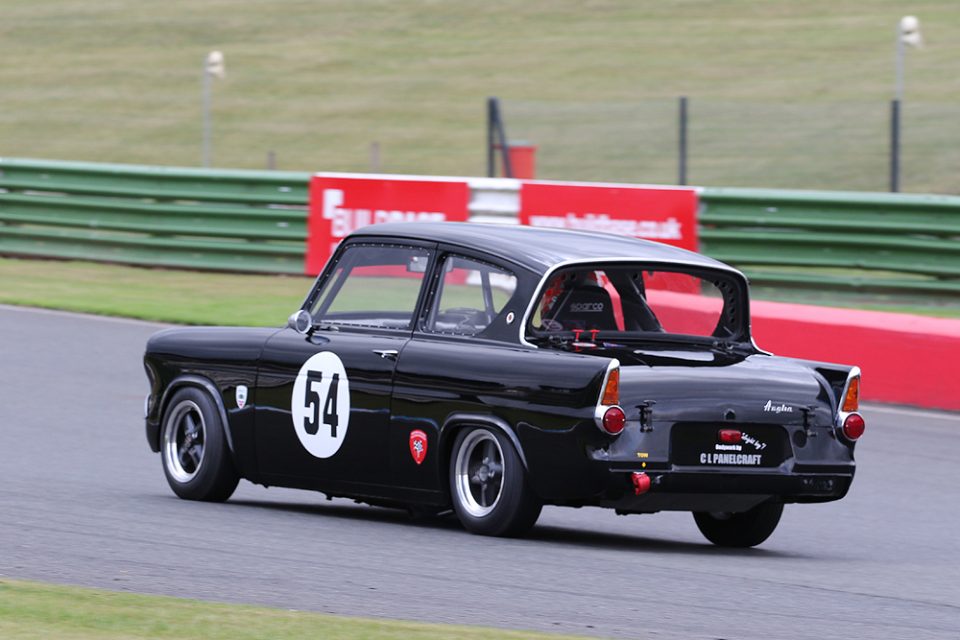 Mike Gardiner moved ever closer to the Historic Touring Car title with victory in the opening race but had Neil Wood as a constant and determined rival in the flying Anglia and less than a third of a second split them at the flag. Wood was looking forward to trying to turn the tables in the second race later on Sunday only to find Gardiner absent after the Lotus Cortina suffered alternator failure and was put away. 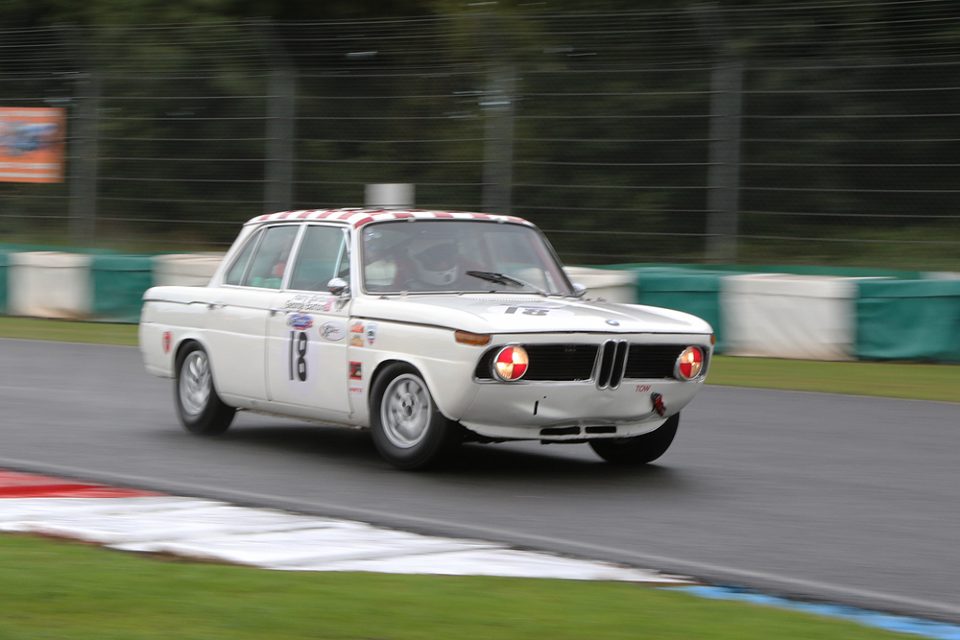 Steve Platts had a great run to third in the first race but parked the Singer Chamois partway through race two so it was Robin Ellis (BMW) and Paul Wallis (Alfa Romeo) who rounded out the overall podium at the end of the afternoon. 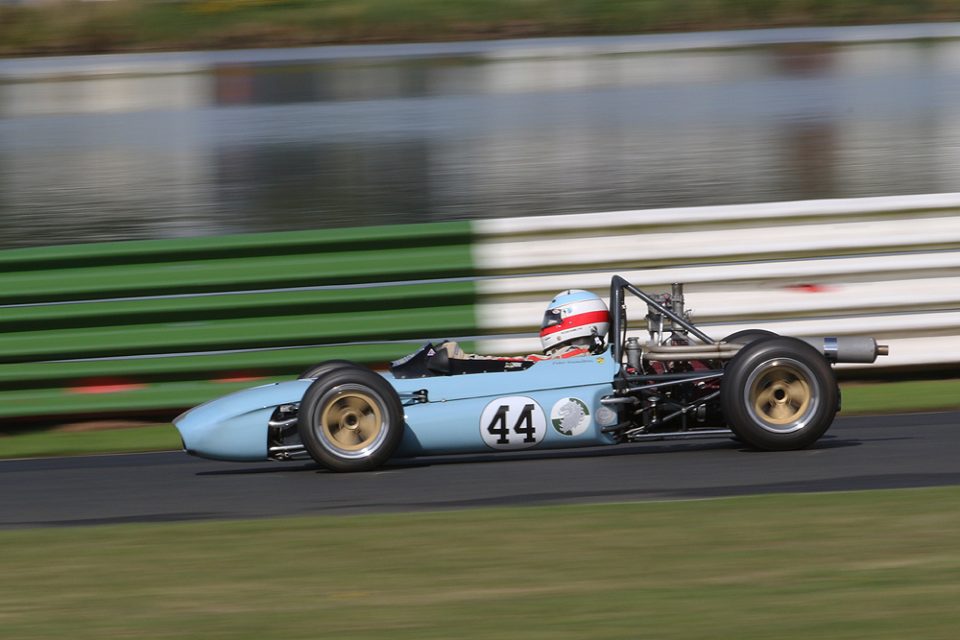 Both Formula Ford categories delivered some fine racing and there was a double victory in the Historics for Tom McArthur who had Horatio Fitz-Simon as a constant shadow in the opening race, with a quarter of a second splitting them after 18 flat out laps. Matt Wrigley pipped Samuel Harrison for third place as the impressive Mark Bates, racing the Alexis Mk15 of Robin Haslam, showed his pace by running fifth, right on their tail. 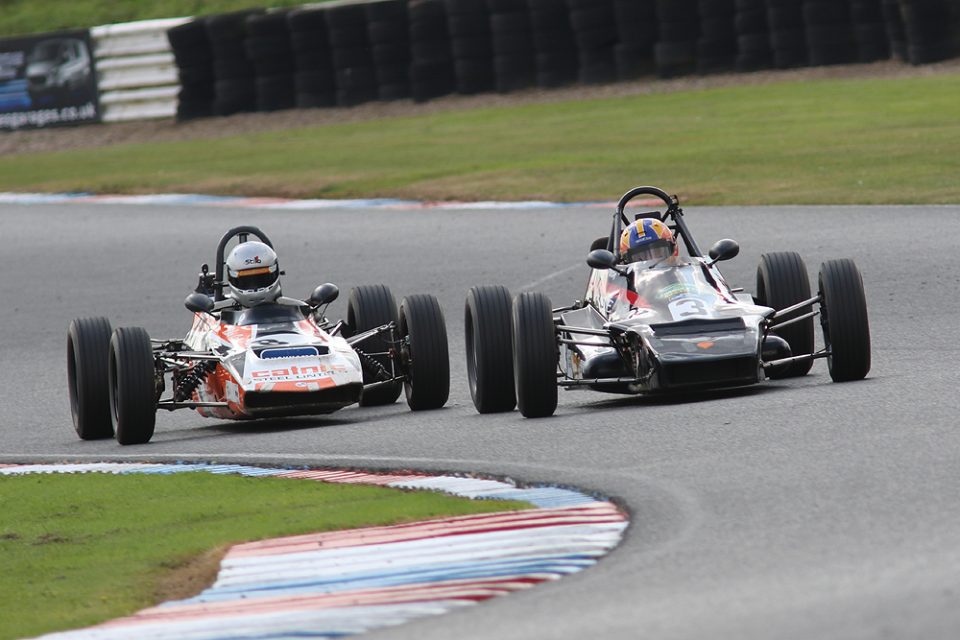 McArthur had things slightly easier in the second race as Fitz-Simon was more occupied dealing with the constant threat from Harrison. That’s how they finished with Bates edging ahead of Wrigley for fourth.

Jordan Harrison took a big step towards the Classic Formula Ford title with two impressive victories in his Lola T540E. The main action in the race lay in the contest for a second as Rick Morris and Stuart Kestenbaum took on teenage upstart Samuel Harrison. 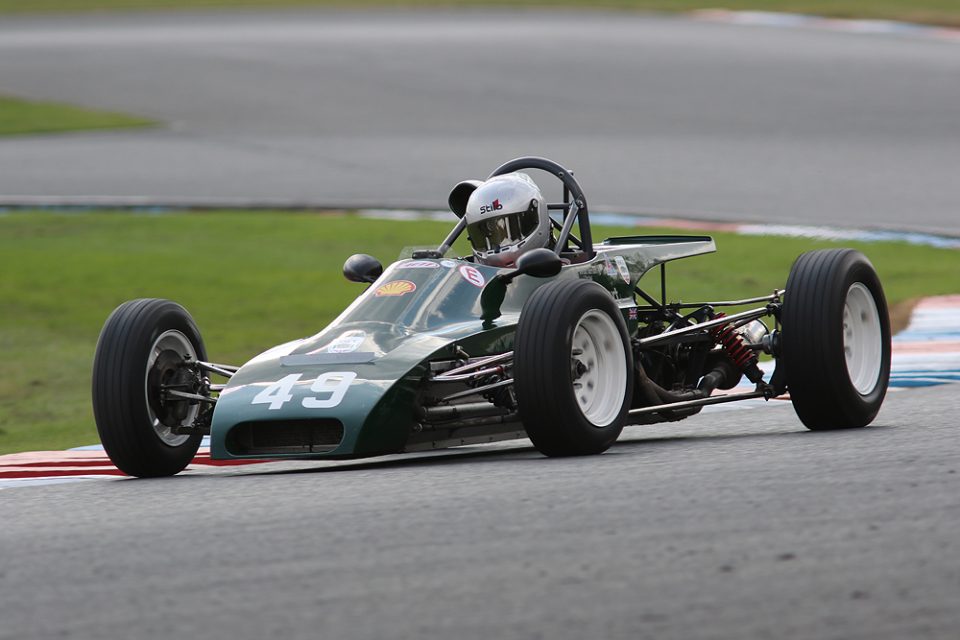 Over 50 years their younger, Samuel Harrison actually got through to second at one point but was then edged back having lost a little time with a moment on the brakes into the Esses and he finally took fourth behind the two hugely experienced elder statesman of Classic Formula Ford racing.

Jordan Harrison did it again in the second race and Morris just fended off Kestenbaum with Samuel Harrison not starting when the oil cooler in his Elden Mk8 split late in the second Historic Formula Ford race. 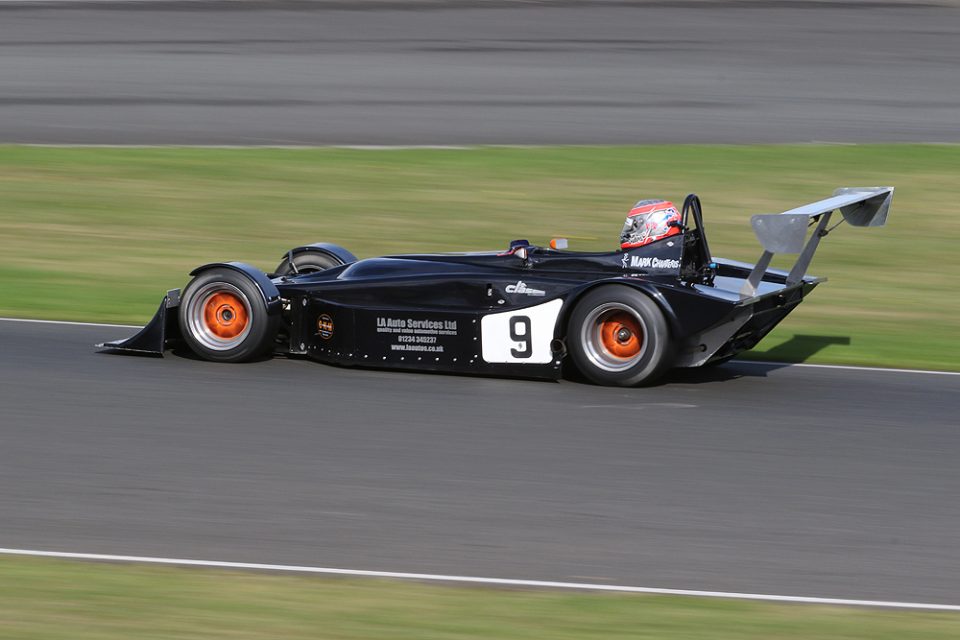 Mark Charteris dominated both Classic Clubmans races although in the second race John Harrison led the early laps before Charteris swept ahead. Spencer McCarthy ran third in the opener but had gear selection issues and didn’t start the second race. The B Sport pack put on some good battles and it was Dave Facer who beat young Tom Muirhead first time around in a result that was later repeated when the margin between them was less than half a second after a fine contest.

The guest Langford Engineering Midget and Sprite Challenge races were quite dramatic with a red flag in the opener after a startline tangle and then a second red flag after a handful of laps for an incident at the Esses. Through it all came Paul Sibley in his MG Midget to score an impressive double win.

Words and Pictures by Paul Lawrence

Our Website uses cookies to improve your experience. Please visit our Champions decided at HSCC Mallory Park page for more information about cookies and how we use them.